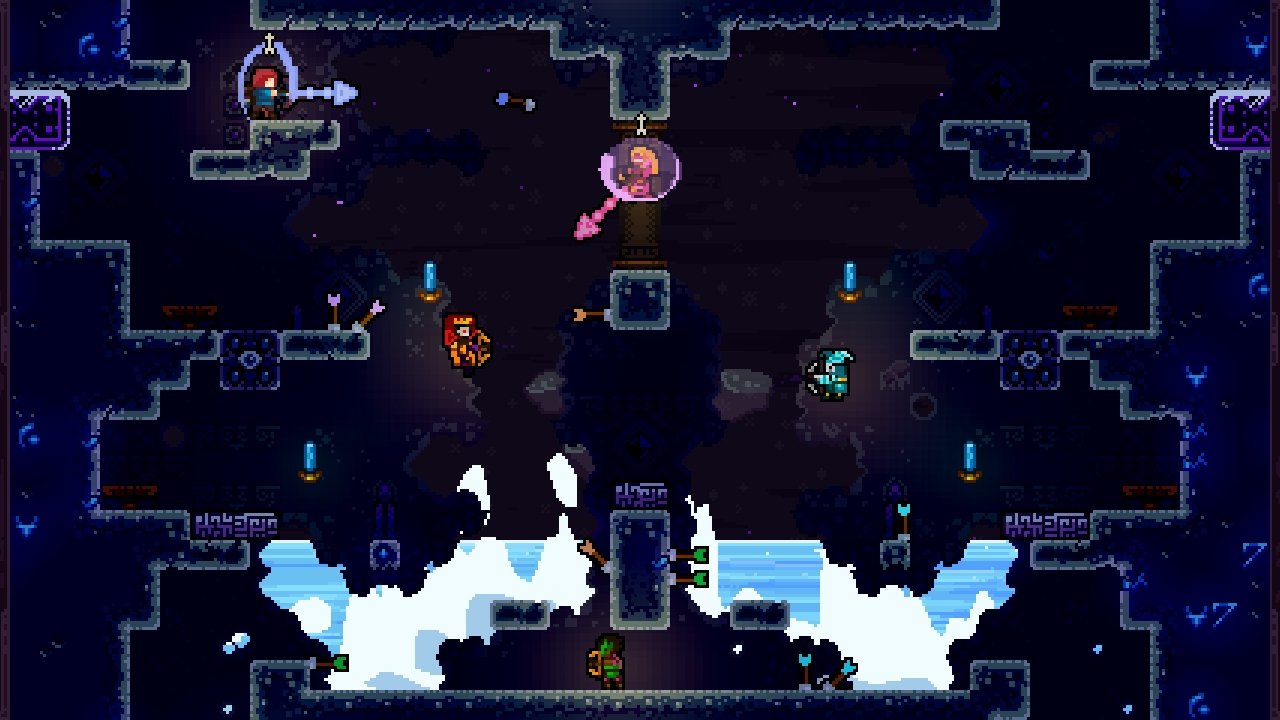 TowerFall first released over five years ago, enough time to feel like an entire gaming era has passed. Fortunately for developer Matt Makes Games, his game's formula feels as timeless in 2018 as it did in 2013. Coming full circle, TowerFall on the Nintendo Switch collects everything from subsequent console releases TowerFall Ascension and TowerFall: Dark World, creating a full arcade package.

There aren't many drastic differences between TowerFall on Switch and its predecessors. But given the Switch's capabilities and it's main draw of being able to take gaming on the go, this quickly feels like the definitive version of the 2013 indie hit.

TowerFall's premise is a simple one, as players get together on their couch and compete on a single-screen map with a limited number of arrows. Quivers will empty quickly and getting more shots means running through the crossfire and collecting any discarded arrows. It's a test of precision, aim, and platforming prowess. Being nimble and avoiding enemy fire is just as important as being a crack shot. If that was all there was to the game, it'd be a solid multiplayer game on its own.

But TowerFall finds a welcome degree of complexity with a variety of debilitating power-ups that pop up through treasure chests. Wings grant flight, Bomb Arrows explode through walls, and Laser Arrows bounce off walls, just to name a few examples. The fun comes in that these power-ups are just as likely to backfire as anything else, leading to some quick pauses to absorb what happened, looking through the instant replay system, and then having a good laugh about it.

Games are rarely predictable and are just as enjoyable whether players are grooving at a high level or getting by through sheer luck. And there's plenty of luck, like those moments when you'll fall through the bottom of the map and pop up on top, stepping on an opponent and scoring a cheap kill. Those kinds of laughs are some of the best moments TowerFall has to offer. Instant replays will often lead to some uproarious laughs, but this is one department where Towerfall hasn't fully evolved. Given the "anything can happen" atmosphere of these sessions, an option to share particularly funny replays would have been a welcome addition.

The four-player multiplayer is still intact, but the Switch version of the game ups the ante with six-player play across larger maps. These maps are just as well-designed as the smaller four-player maps and still offer the same level of madness. Better yet, all multiplayer games are customizable, with different game variants available to keep the action mixed up.

Those who can't get five other players together will still find plenty to do, thanks to the Ascension and Dark World content all being available. This opens up the game to a PvE Horde-style experience, with players competing across various multiplayer maps and taking down a variety of enemies. Enemies range from run-of-the-mill flying bats to more sophisticated enemy AI archers. Difficulty ramps up at a good pace, with some waves even offering up some intriguing twists. One example saw me take on an enemy wave as the room scrolled horizontally and challenged me to keep track of where my archer was. While the original Quest mode offering up harder enemies as it goes along, the Dark World tosses in the wrinkle of boss monsters, which opens up a whole new level of challenge.

Trials is more of a preparation for the multiplayer game as a whole, laying out scarecrows and tasking players with destroying them all as quickly as possible. This mode felt the most limited, but is good for quickie sessions while riding busses or taking short flights.

Even five years later, TowerFall remains one of the most entertaining multiplayer games I've ever played. It's visual style is one that would have fit in with 90s console games, but the gameplay offers the kind of fun that would fit in with any gaming generation. It's ideal for local parties, but that leads to TowerFall's biggest downside. It's still designed for local multiplayer only. Those hoping to get into some arrow-slinging shenanigans online will be sorely disappointed. It stings more this time around given TowerFall's capability to support six players.

With numerous maps, characters, and an engaging single-player mode, TowerFall is a deep experience and one that's worth having in the Switch library when company comes over. TowerFall started off its life as one of the sole shining stars of a doomed Ouya platform, but now it ends its life in front of a massive Nintendo Switch install base. And this star shines as brightly as ever.

This review is based on a Nintendo Switch digital code provided by the developer. TowerFall is available now on the Nintendo eShop for $19.99. The game is rated E10+.