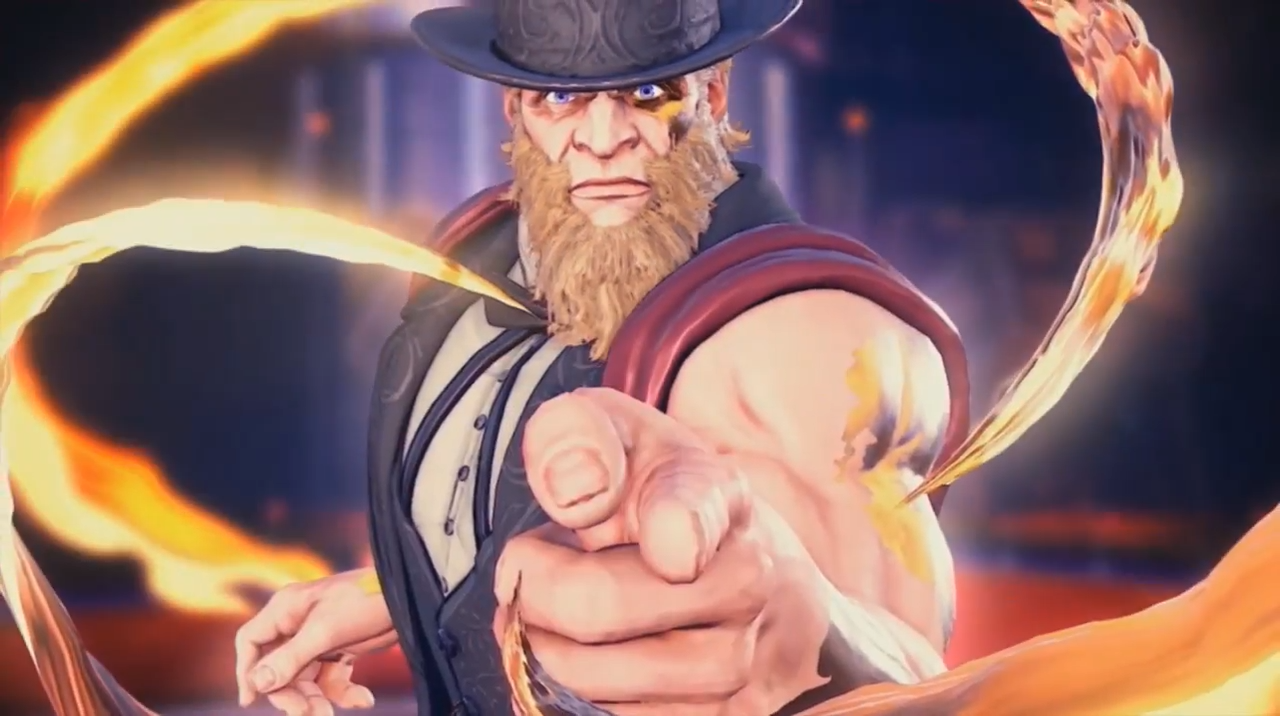 This story has been updated with new facts about G and Sagat's specials, V-Skill, and V-Triggers.

The final game of the evening at EVO 2018 was Street Fighter V: Arcade Edition. And while there have been announcements throughout the day, many of them that nobody saw coming, those who have followed the last few days closely had a good idea of what to expect. Earlier this weekend, Capcom sent out a mysterious Message to the People, with the cryptic message instructing fans to tune in to Street Fighter V's Top 8.

Prior to the start of Top 8, Street Fighter producer Yoshinori Ono teased the announcement before he was interrupted by a man in a stovepipe hat named G. Yes, it's that G, the next character in Street Fighter V: Arcade Edition's Season 3 Character Pass. This led to the reveal of G's official trailer, which showed the character using a variety of supernatural fire powers to perform wild combos.

G's gimmick extends all the way to a special move called Message to the People, in which G delivers a rousing speech to the citizens of Earth. This will increase his EX Gauge, but he's completely vulnerable to attacks.

G's V-Skill is G Barrier, which covers him in a barrier of fire. If the barrier hits opponents, they'll get launched into the air. The G Barrier can also absorb projectiles. His V-Trigger I is Maximum President, which turns G's skin gold and immediately shoots his Presidentiality level to 3. G Barrier can also be launched as a projectile. His V-Trigger II is Dangerous President, which allows G to store power in his massive arms and unleash it as G Explosion. He can also use G Rage, a powerful command grab that can withstand one armor hit.

Most interestingly, the folks at Capcom are not hiding his resemblance to another single-lettered character: Street Fighter III's Q. Where the Street Fighter lore will go with this remains to be seen.

Ono wasn't done, however. He had a second trailer for the Season Pass' final character. It was indeed the long-awaited return of Sagat, utilizing his classic arsenal. He also put them to much better use, as he was able to chain his Tiger Shots together. The trailer ended with Sagat putting his opponent away with his his new Critical Art.

Sagat should be much more familiar to Street Fighter veterans. His Tiger Shots can still be fired at two levels, but the lower Tiger Shot (now called Grand Tiger Shot) does less damage and leaves Sagat more vulnerable. Sagat's V-Skill is Angry Charge, which amplifies the power of Tiger Uppercut. His V-Trigger I is Tiger Charge, which allows Sagat to use the massive Tiger Cannon projectile with HP+HK. His V-Trigger II is Tiger Assault, which grants Sagat the use of a powerful swiping kick called Tiger Spike. Tiger Spike gains power if players press HP+HK, so much so that it can break an opponent's block. Sagat can also lunge forward with this move to create the Tiger Knee Crush.

The big news, though, is that both characters are out THIS MONDAY! For more information on G and Sagat, visit Capcom-Unity.