So I have a bit of a new gaming addiction in my off-time and on short breaks. I downloaded Pokemon Unite on my phone and started fiddling with it frequently. I quit League of Legends a while back and have wanted something to scratch that itch. Pokemon Unite isn't as involved as LoL, but it fits the bill. So well in fact that I attained Master Rank in it over my vacation last week. I also did it without spending a single penny on the game. With that in mind, I thought maybe I'd share some tips to help you cover that ground and maybe even avoid frustrations and mistakes I had along the way. 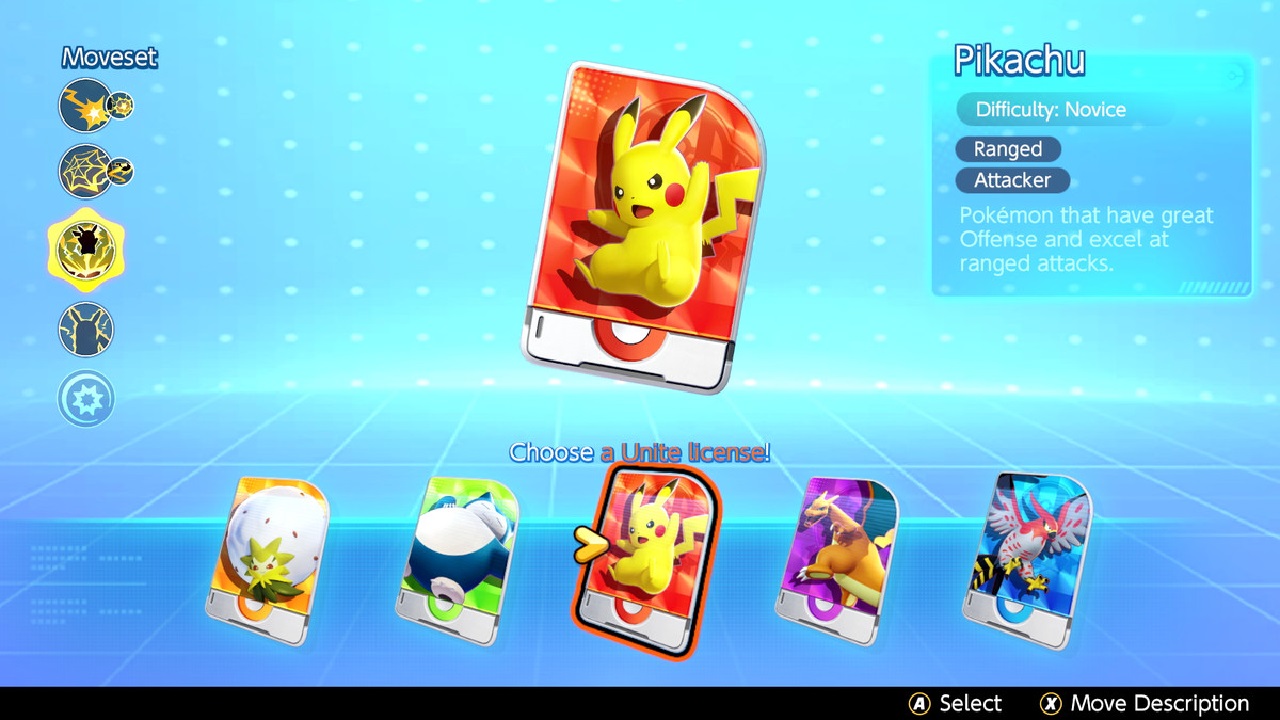 So, some tips I have right off the bat relate to a few things you should be mindful of before you even begin playing the field. These include building your starting roster of Pokemon, investing in Held Items, upgrading them, choosing your battle item, and more.

One of the first things you'll get to do once you get past tutorials is select your starting Pokemon. Five are available.

So here's my take on these: Snorlax, Talonflame, and Charizard are game-changers if you dedicate the time to figuring out how to use them best. Pikachu and Eldegoss can be good, but they definitely require more team synergy to get a W at high levels. That said, Snorlax and Pikachu are the easiest to use while Snorlax, Eldegoss, and Talonflame require some finesse to be effective. Charizard is also a late-game bloomer that can become a monster in the end, but it's weak at the start and needs some help getting rolling.

Now, with all of that said, don't sweat your first choice too much. This is just the start, and you will have plenty of opportunities to get your hands on further strong and varied Pokemon through both challenges and special events as you go. I haven't spent a dime on the game, but I have already amassed a roster that includes 12 of the 26 available Pokemon.

I would only advise that you don't spend Aeos Coins (one of the in-game currencies earned by taking part in battles) on any of the following Pokemon because while you can, you can also earn them for free through challenges and missions. The Pokemon you can currently earn are as follows:

With that said, you should also try to cover all of Pokemon Unite's five positions with at least one Pokemon: Speedster, Attacker, Support, All-Rounder, and Defender. You might have noticed that your starter Pokemon will cover one of the five roles. The earned Pokemon will also help you cover the gaps and each of them is good in their position. If you don't pick up Charizard or Talonflame at the start, I would suggest going after them to fill those roles. I would also suggest Lucario in the All-Rounder role because its strong at nearly any level of play.

For the Defender role, I would seriously consider Blastoise as it is one of the most versatile Pokemon in the whole game right now with high health, major displacing abilities, the ability to go uninterrupted, and a devestating area-of-effect super move. For Support, I'd consider Wigglytuff because its Lullaby can outright slow and stop enemies in their tracks for your pals to wail on them. Always good.

Other than that, get a feel for the roles, figure out what fits you best, and play what you like. Cramorant (Attacker) is my current love because it can zip around the map, displace enemies, go toe-to-toe with most attackers, and secure Aeos points pretty easily, with a nasty super to boot.

Held Items: What to buy and upgrade 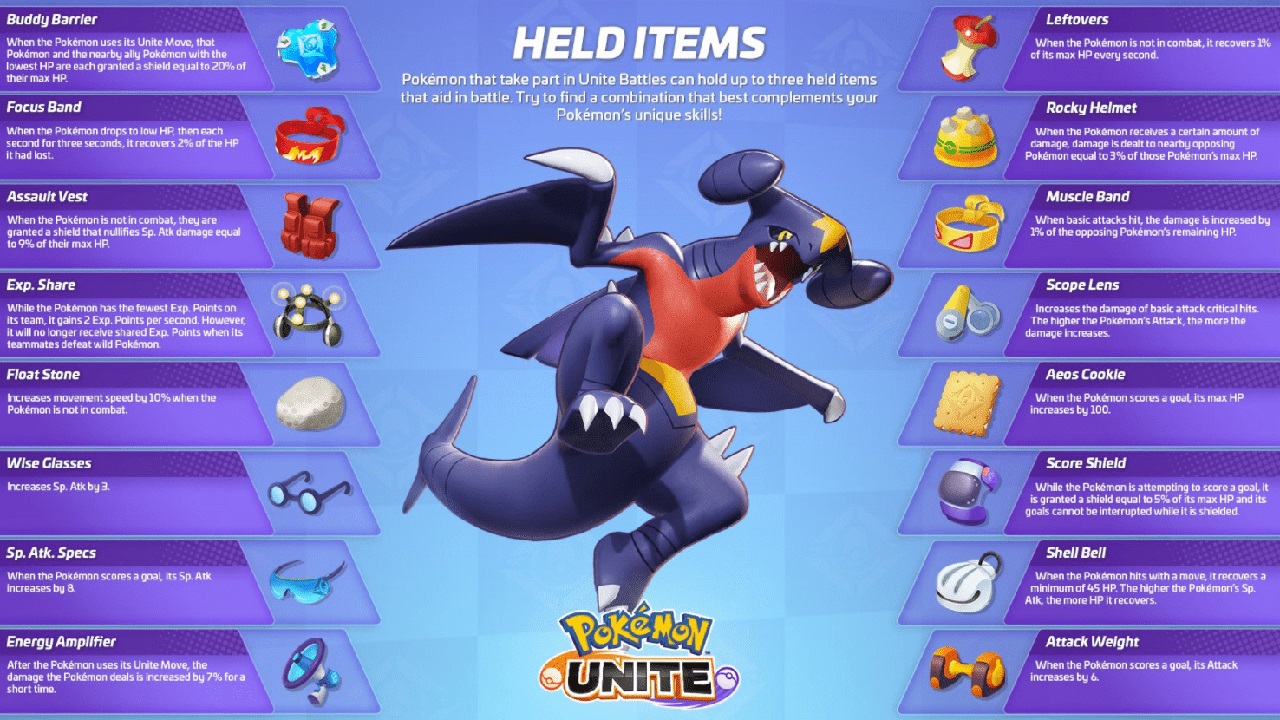 Play enough Pokemon Unite and you will get to Held Items, which your Pokemon can equip three of. When people think Pokemon Unite is pay-to-win, they're usually talking about Held Items because this is where you can turn your Pokemon into a beast with special effects and abilities. However, the truth is that you can actually overcome most opponents by choosing wisely with what the game gives you through trials and challenges so you have the right items and upgrade them appropriately for your squad.

Here's the thing: there are a few Held Items that are simply better than others. Someday, they may move out of meta, but they are so good, they can still work well on nearly any Pokemon. Here's which ones they are:

Here's why these three matter: Buddy Barrier grants you and your closest ally a massive shield when you pop your Pokemon's Super move. Focus Band lets you super heal a large amount of health when your HP gets low, and Score Shield gives you a barrier when you go for goals that makes your scoring uninterruptable unless the shield is broken before you score.

Each of these items can work well in every single Pokemon build you'll come up with. Outside of that, I would specialize in your favorite role of Pokemon. Muscle band is great for Pokemon that rely on attacks more than abilities because it does percentage damage to health while Wise Glasses or Choice Specs are great on ability users because they supply major buffs to ability damage. Weakness Policy is great on tanks because it sends damage back at your attackers and Exp. Share is good for supports because it lets you get experience while your allies are farming nearby. Kind of a must on that role. 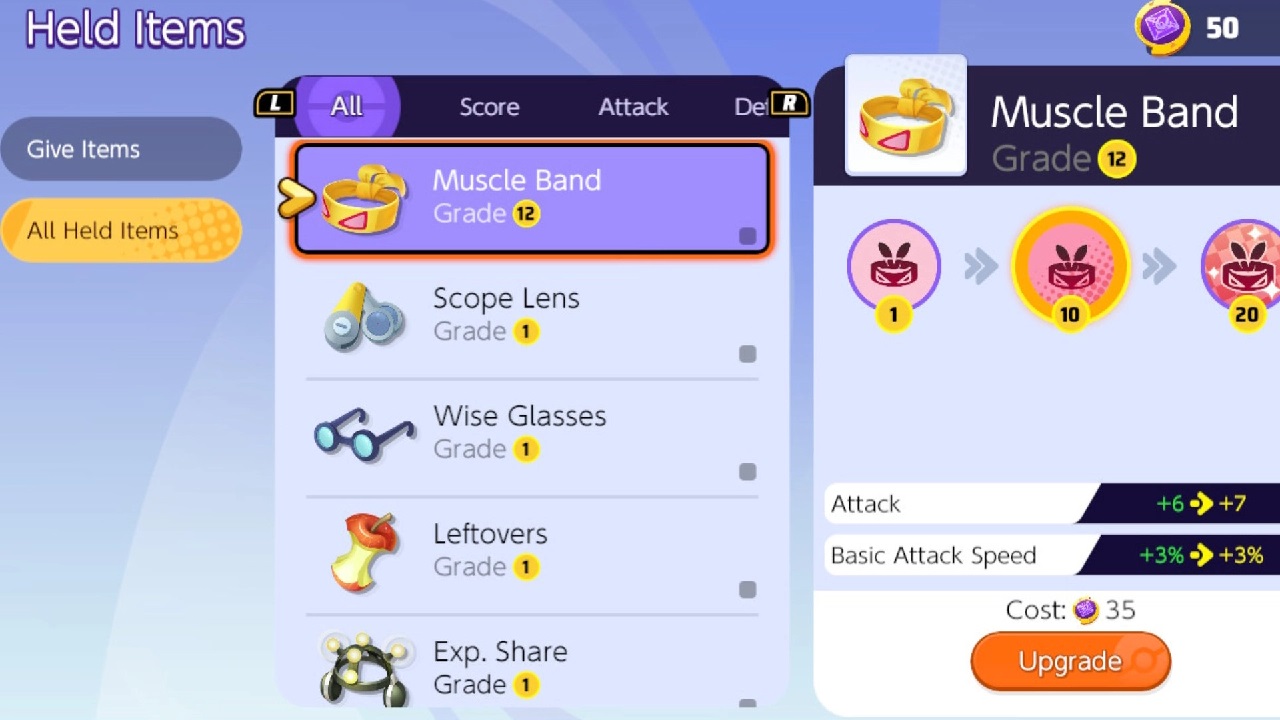 Whatever you decide to do in your held item composition and upgrades, don't spread yourself too thin. You only get so many Item Upgrade tokens easily before they start becoming very scarce. You will also get exactly three tokens that can boost a level 1 item to max level. Do not use Item Upgrade tokens on an item you want to boost to 30 in one go. It's a waste of precious Item Upgrade tokens you'll need later.

With all of these tips, you're ready to hit the battlefield in earnest and will be ready for Ranked when you get there. From here on, I'll give you tips for the field.

Pokemon Unite is broken up into several phases and each has a pretty specific to-do list you'll want to nail down. This should help you formulate your game plan. 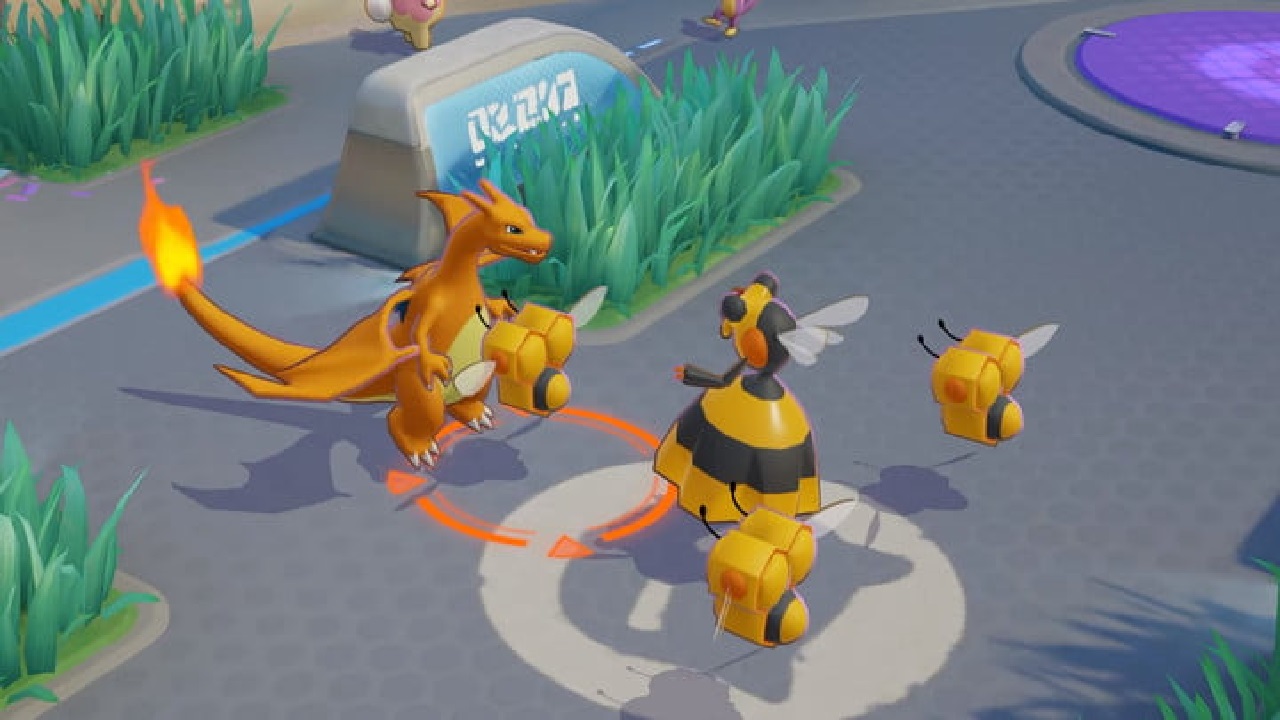 Right out of the gate, your goal should be leveling up faster than your opponents and breaking their first wave of goals. Generally, your team of five will be split into three groups: Two top, two bottom, and a middle "jungler" who should be supporting both.

The top and bottom squads should rush out the gate and aim to clear their lane of wild Pokemon and get to a center wild Pokemon in both top and bottom paths. You need to challenge for that Pokemon because defeating it first can give you a lead in experience and potentially scorable Aeos points.

Here's my method: Leave the first wild Pokemon for your lane partner and go for the second. Then, take one of the row of two after that and beeline for the center pokemon. If you do it right. Your partner should be there with you to sufficiently challenge.

Conversely, if your opponents pressure you hard at the center Pokemon, you might also consider ditching it and going for an early score. That will also net you an early boost in experience. From there, try to poke and prod at your opponent and see if you can't get a kill that will open up their goal for a score. 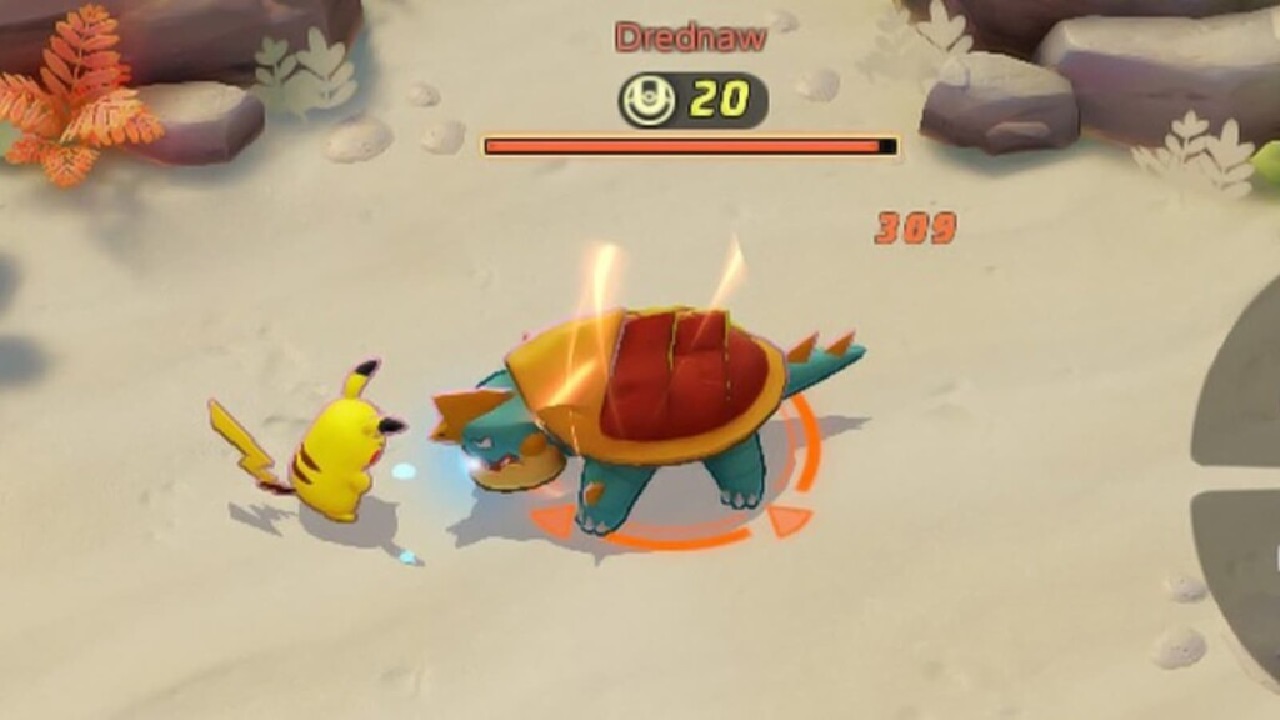 When the clock drops to 7 minutes, you should start shifting strategies. At the bottom of the map, Drednaw will spawn and grants your whole team experience and shields if your team lands the kill on it. At the top, Rotom spawns and if your team defeats it, it will move towards their nearest goal in the lane. If it reaches that goal, it will knock it down 20 points for your team and make it instantly scorable for a few seconds.

Both of these buffs are paramount to securing your lead. Drednaw is the definite priority though. Rotom is good for quick scores, but Drednaw's experience boost will aid your team in remaining stronger than your opponents' and give you a shield that could play a crucial role in a fight... like securing a Rotom buff. When these Pokemon spawn, short of being scored on or killed, drop what you're doing and form up with your team to take them. This is one part where games can be won or lost.

When the clock hits around 2 minutes, Zapdos will appear. This is the most crucial part of the game. Zapdos is overpowered to say the least and games will be won and lost based on who takes it down. When Zapdos is defeated, the defeating team's surviving members all get 20 points added to their stock and all of the opposing team's remaining goals become instantly scorable. At this point, goals are also worth double points regardless of who has the Zapdos buff.

Your goal should be twofold, get the Zapdos buff or kill everyone left before they can get near a goal if they have it. The sheer amount of ease with which you can score with a Zapdos buff means most games tilt heavily towards whoever gets it, so whatever you do DO NOT GIVE UP THIS BUFF if you can help it. Form up with your team, pick off stragglers, push them out of the area, attack Zapdos sparingly... Just be weary of enemies coming in for the steal. Chances are heavy that if you win at Zapdos, you win the game. 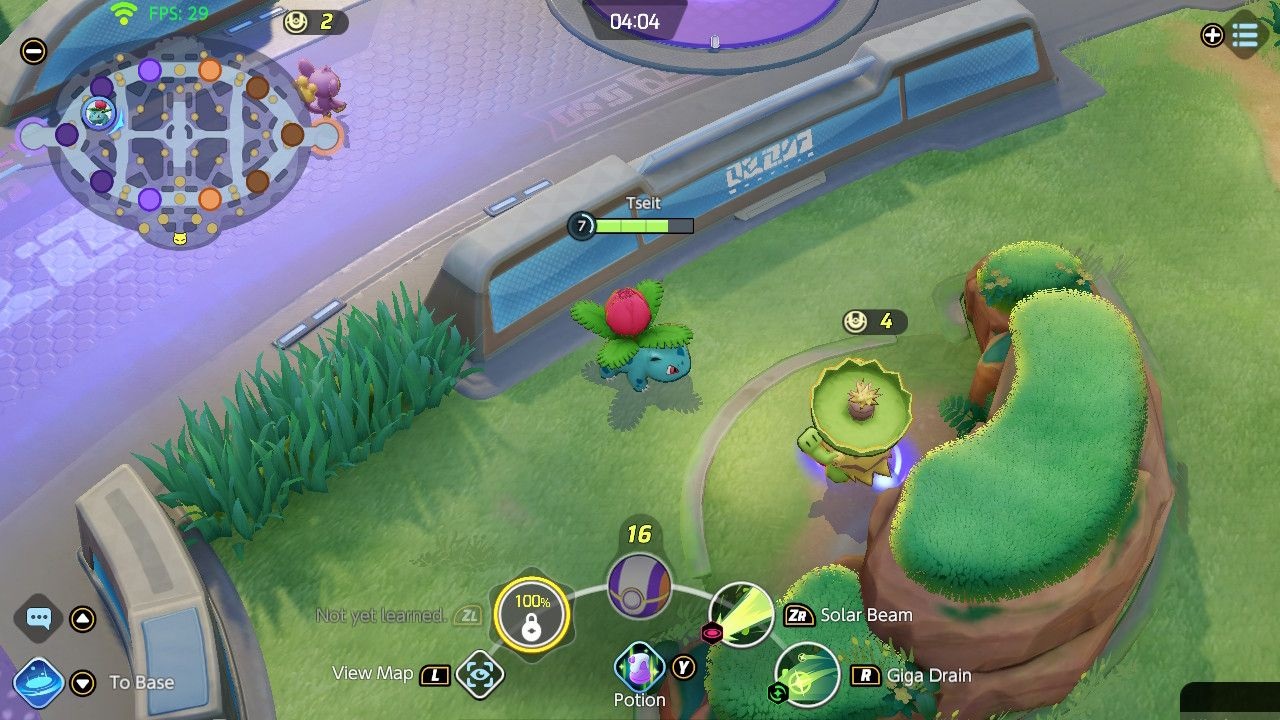 So, you're taking on the middle path role. Here's what you need to be doing then. Clear your entire side of the field starting with your buff Pokemon: Bouffalant and Ludicolo. Bouffalant will give a buff that slows enemies you attack while Ludicolo allows you to do more damage to low-health enemies. Knock out the two Corphish on your side too and work your way to the middle where two more Corphish should await.

At this point you should have a good stock of points and be at around level 5. Look at the bottom lane and the top lane. If an enemy has pushed your side in, attack them. Make it a 3v2 fight. Cut them off and try to crush them with your team. Then move in for a score. You can also go around their back and make a sneaky score. Whatever happens, retreat back to base and begin your route of buffs and wild Pokemon again.

Your goal should be to always assist the lane that has the most opportunity or needs help. When the middle phase starts, it's on you to be moving towards top or bottom to secure Drednaw or Rotom. Either way, be aware of your team and try to help them where they need it most.

That's about all I have for you. That's the list of tips and strategies that got me to Master Rank in Pokemon Unite. Maybe it will help you too. Are you playing already? Tell me how your journey is going. Good luck out there in the field!