Asif Khan, CEO of Shacknews, spoke with Tim Willits, Creative Director at id Software, about Quake Champions, the 20 year history of QuakeCon, and doing it for Shacknews. Please take a look or read the transcript underneath the video embed.

Shacknews: We're here at QuakeCon talking about Quake Champions, but we're going to talk about the origins of QuakeCon. Can you tell us a little about how QuakeCon originated?

Tim Willits: Yes. So, QuakeCon originated all the way back in 1996. When Qtest came out there were a number of guys that became friends playing Quake and they thought, “You know, it'd be cool to actually meet and get together.” They, all by themselves no help from us, decided to meet near our office. Our office back then was over in Mesquite, Texas. They sent us an email and said, “Hey we're all down here. We're making a QuakeCon convention.” We thought it was really cool, very exciting, came to visit and stuff. As the years progressed, it became bigger and bigger. Eventually, we started to help them manage it and we started to take over, but it is still volunteer driven, volunteer managed, and that is what makes this convention very unique [compared to] any other convention in the world.

Shacknews: You guys talked about, at the presentation, how [QuakeCon] was one of the first eSports events. It's also amazing to see how BYOC (Bring Your Own Computer) has evolved. Can you talk about how this weird symbiotic relationship between the community and the devs, making this a 20 year event now?

TW: The original QuakeCons were always about “bring your own stuff” and then they would compete to see who the best person was that showed up. It was a natural evolution into now let's take that competition and turn it into something more formal. People loved bringing their computers because it's their pride and joy, they worked on it all year, they built it, this one is faster than that one. There was always this sense of community and sense of sharing. The tournaments got bigger and bigger. Now we have $50,000 prizes and the BYOC has gotten bigger and bigger. This year we have over 3000 computers, but it is still that whole sense of community, sense of coming together with your stuff, your computers and competing with your buddies.

Shacknews: What role does the event play for the Devs themselves?

TW: The great thing about QuakeCon is that it allows us developers to talk directly to our fans. One of the things, especially for Quake Champions, is that we are holding private play tests with the people that are competing in the Quake Live Duel Masters Tournament have a chance to basically beta test before anyone else in the world, the next Quake game. It really gives us a chance to directly talk to our fans and the people that really care about us. 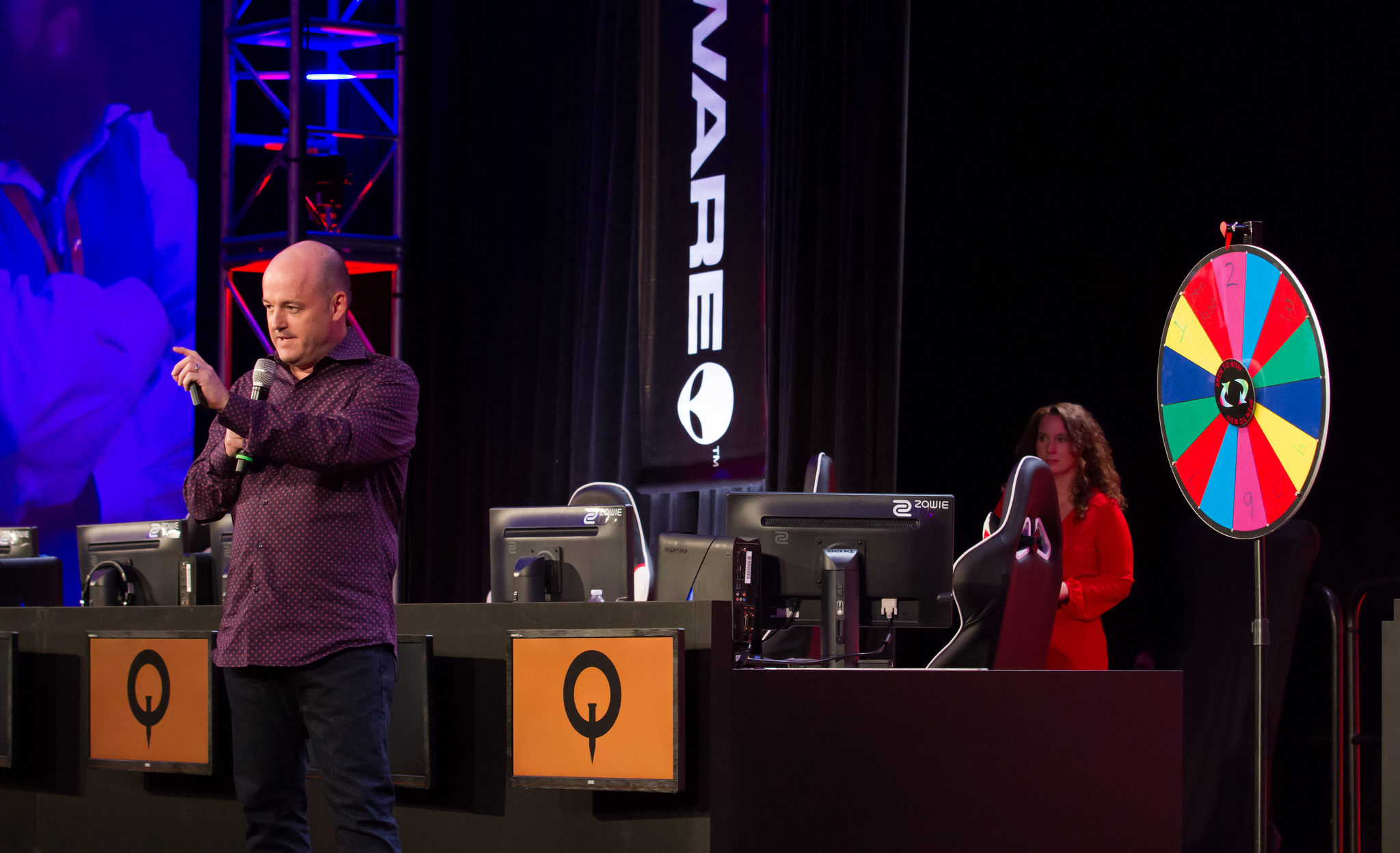 Shacknews: How do you guys envision eSports evolving with QuakeCon as Quake Champions launches? Are we going to be seeing 3 different tournaments next year at QuakeCon?

TW: QuakeCon has always had a long history of being an eSports event even before the word “eSports” was invented. It was always about competitions, sponsors, getting on stage, being the best in front of a crowd, and winning real prize money from playing video games. That's really what eSports is. QuakeCon was the first, really. That will continue. Quake Champions, we are steering directly into the eSports market. We want to be the best competitive multiplayer game out there. We want to use QuakeCon as either a launching pad for a bigger tournament or a Finals here or something. Next year, when we know more about our exact eSports plans and how we are going to support tournaments and leagues we'll talk about that. 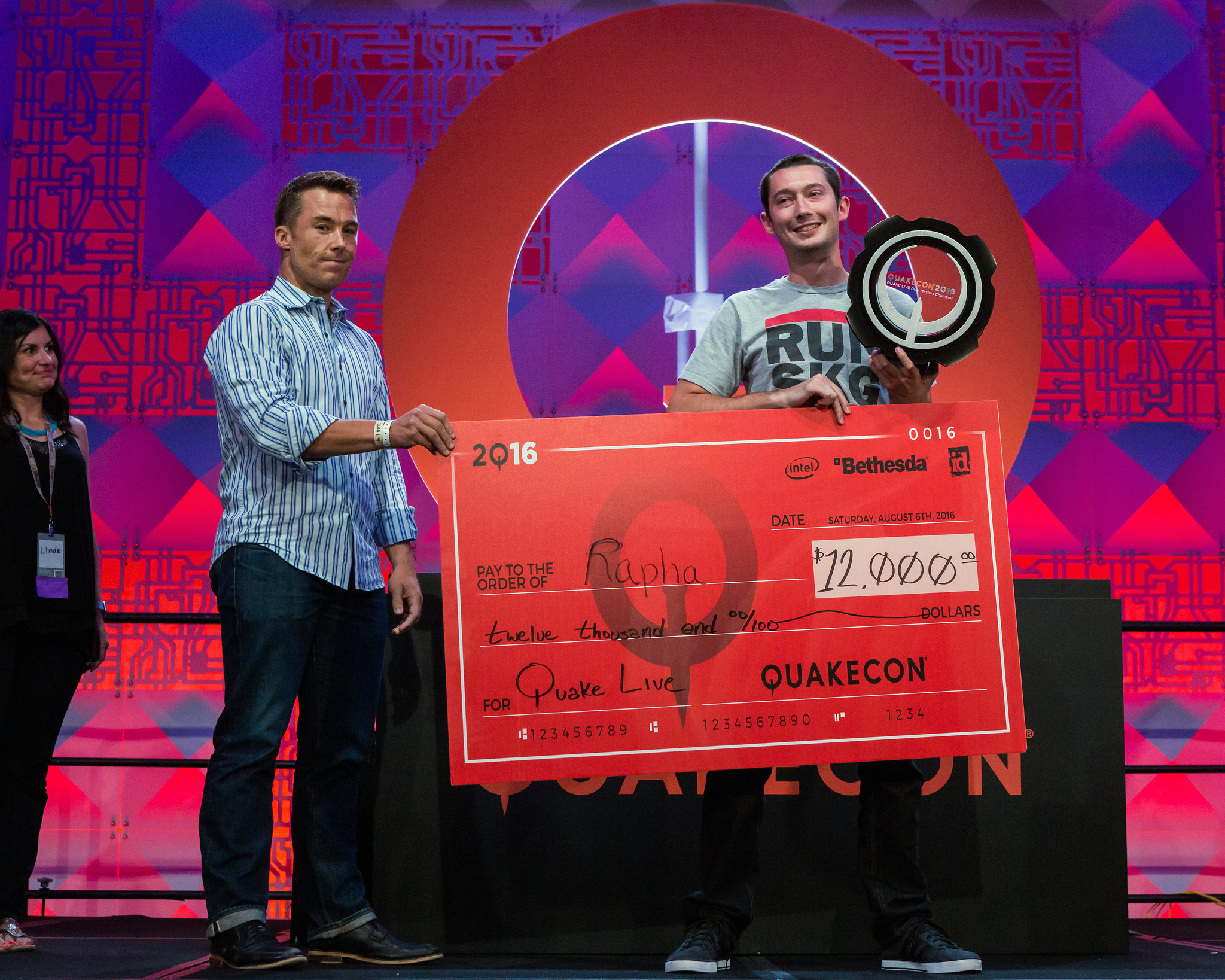 Shacknews: What do you think has separated Quake from all other shooters? As a franchise, looking at the evolution of Quake, to Quake 2, to Quake 3, Quake Live, Quake World. What makes it so much better than a lot of other shooters?

TW: I think it's the core of the experience. It's that movement. It's offense and defense. The weapons. The Holy Trinity of weapons: Rocket Launcher, Rail, Lightning Gun. The skill. It brings the best Quake players in the world to that game. When you watch the best players play, it is an amazing thing to watch. It can be fun if you just want run around shooting buddies, or it can be fun if you are the world's best railer. It has always captured that competitive spirit of our industry.

Shacknews: It has been awhile since we have had a new Quake, so you've been able to watch the industry evolve. How do you feel Quake has influenced the first person shooter genre in a time where it has been (not dormant) but away from a new title?

TW: Quake, in my opinion, was probably the most influential games to what multiplayer gaming is today. Many people may not know that, but most multiplayer games can trace their roots all the way back to Quake. It's always been that foundation of fair gameplay, fast responsive experiences. Even the client server architecture was first developed with Quake in a multiplayer setting. It is those roots that run deep and that spirit of the game that has really fueled the industry.

Shacknews: How do you look at if from a development standpoint and also a marketing standpoint to ensure that this will be an eSport?

TW: We've always done competitive gaming with Quake. It is in our DNA. For us, what we are doing here at QuakeCon specifically is all the folks who have competed in the Quake Live Duel Masters Championship have had a chance to sit down and play test the new game. We are listening to them today. There's play tests going on right now as we talk. We want to make sure we have a long enough Beta period. It will be a long Beta period because we want to start off small and start adding people to the closed Beta. We're gonna have to change something along the way, it always works like that. Because it is in our DNA and we have QuakeCon, which is the competitive gaming Mecca, I think we are in a good position. 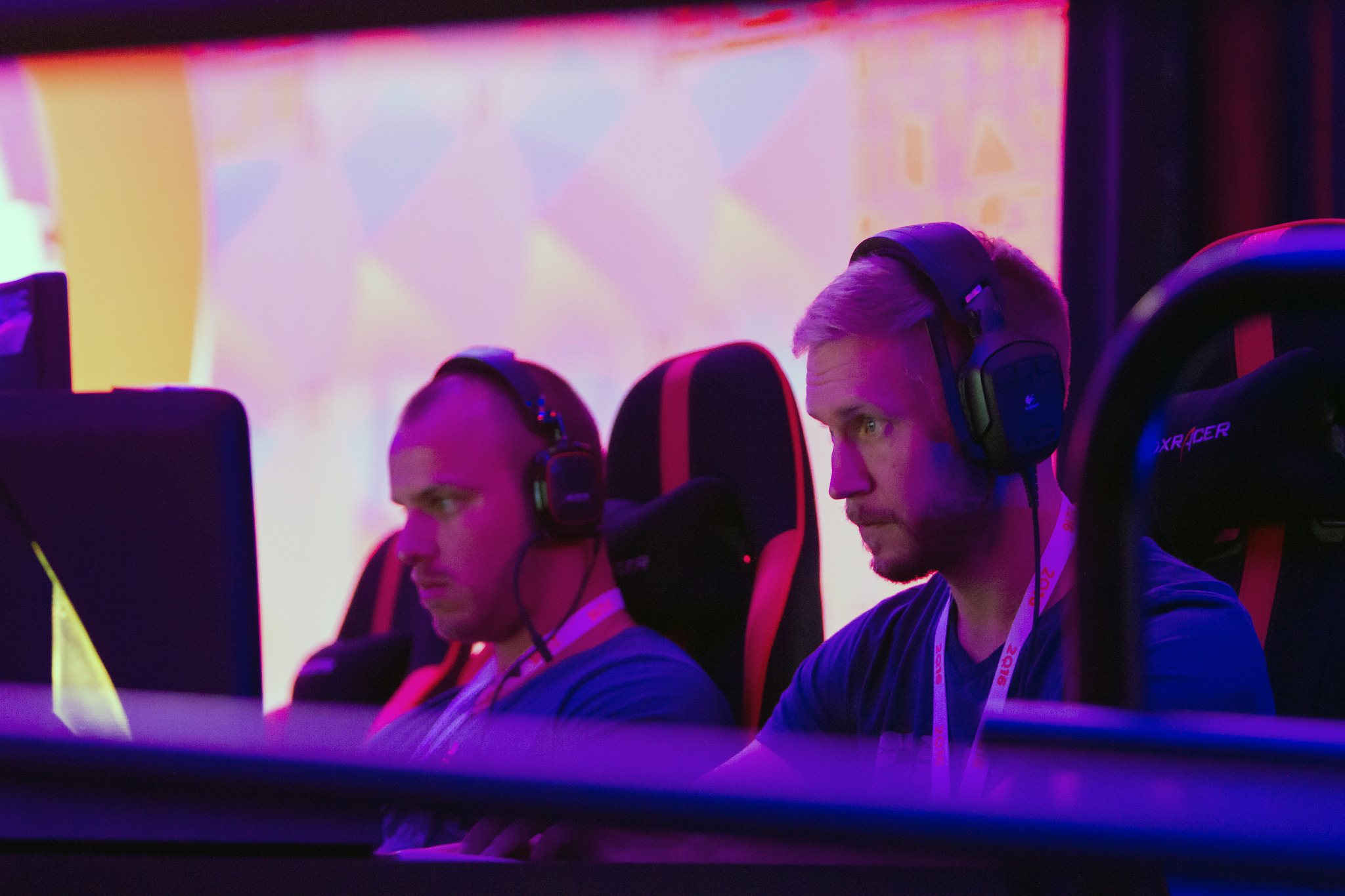 Shacknews: A lot of these games are all about the leagues. Are you going to be establishing your own league for Pro Quake Champions players? How are you going to view eSports from an organizational aspect?

TW: We're still working on our publishing eSports plan, and we can't talk about it right now. Not just the game, but Bethesda as a whole is working through our plan. Soon as we have more to talk about, we will.

TW: Quake Champions is PC only, now. We feel that that platform with the speed at which we want to play and the precision and at the level that we want to compete with the best Quake players in the world, that is the platform that we need to do it. The PC platform is huge. It really is. Our focus is to make it tight, controlled. Laser beam focused on making the best competitive multiplayer game we possibly can. We feel that's the platform to do it on. We'll continue to grow and push the bounds until we need to do something else. 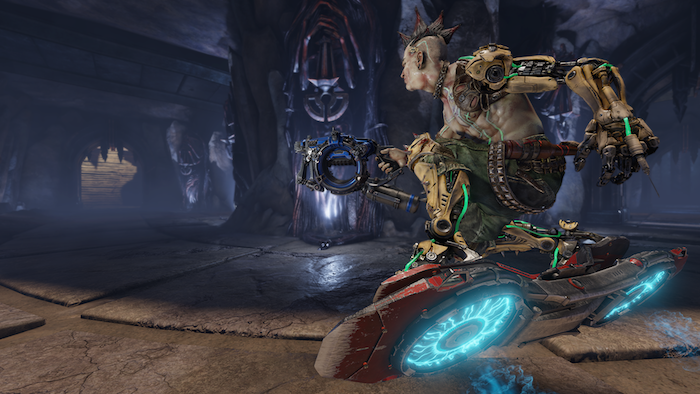 Shacknews: Another really important part of eSports is the broadcasting of it. Can you talk about how you guys are looking at television, Twitch, or your own live streaming solution, TBS has eLeague now. Are you guys looking at various partnerships?

TW: That's all in our bigger Bethesda plan. We have some pretty smart people that are working on that but I can't talk about it now.

Shacknews: How many Champions did you guys announce here and are you planning on dribbling them out over the next year or so?

TW: We have eight right now that will be playable. If you are here tomorrow for the Finals, you may be able to see all 8 in action. We'll talk about more as we go. We'll have around a dozen or so when we go into closed Beta and we'll add more as we go, but if the game is successful and people enjoy it we'll keep adding champions for as long as we can.

Shacknews: We started as a Quake fan site, Quakeholio and sCary's Shugashack and became Shacknews. We've had multiple threads on our community Chatty about Quake Champions this week. One thing that a lot of our users are kind of worried about is the addition of the Champions, because they are creating different powers. How are you going to iterate on it to make sure there is still a balance and it is still a fair game?

TW: Yes, that is a great question. Everyone needs to keep in mind that at its core it is still a peer skill, peer shooter game that you want. Rocket jumping, the weapons, there's no load outs, you have to time the items, and the abilities of the Champions are additive to that experience. They do not fundamentally change the way you play. They enhance the way you play with more depth and more strategy. Our philosophy with the Champions is that we want to have a Rock, Paper, Scissors type concept where there's always a counter to some ability. For instance, Scalebearer if he's doing a bull rush and you're Nyx, you can ghost walk and he'll pass right through you. Or if you're Visor and Nyx ghost walks, you can still see her. It is those types of counters that will really help balance the overall game.

Shacknews: At our very core, we are a Quake fan site. We love Quake. I think people were a little on eggshells about this game at E3. This recent trailer really put a lot of nerves to rest. I loved seeing the rocket jump. I think the one thing about Quake that really always was right is the pace of the game. Can you talk about how many FPS you're planning on running this thing at and what kind of minimum specs we're going to be needing for our computers?

TW: We want to run it as fast as you possibly can. We want to make a 120 hertz game. We haven't actually figured out the minimum specs yet, but we want people to be able to go buy a nice new video card and show it off with your friends and run Quake Champions as fast as you can run it. That's kind of the cool thing about Quake and this franchise.

Shacknews: Will you keep doing it for Shacknews?

TW: I will. You know what? I have a special place in my heart for Shacknews.