Compulsion Games’ We Happy Few is now available via Steam Early Access or the Xbox Game Preview program, although it's being released in its very early stages as it doesn’t have a single-player driven narrative yet. This means those who purchase the game now won’t learn any of the playable characters’ stories aside from the prologue, which was shown at E3 2016.

While Compulsion Games works on completing We Happy Few’s narrative, it’s allowing those who want early entry to the game to be able to experience its procedurally generated world while learning the rules of Wellington Wells and experimenting with some of the game’s key features. While we went into our experience with the game knowing full well it was an incomplete game, we didn’t think it’d be as fleshed out as it would be at its current state.

Sit Back and Relapse Again

We Happy Few starts off simple enough. You play as Arthur Hastings who works as a redactor as he erases unpleasant stories from upcoming newspaper stories and the town’s records. As Arthur is working, he comes across a story about his brother, Percy, and himself winning a contest. This causes a sudden flashback, which has him reaching to a personality-altering pill called Joy. Instead of being a good boy and taking his medicine, he chooses to remember the event, which sets him down the path of a Downer, resulting in his capture and isolation.

Arthur will come in contact with some really twisted characters, such as one who believes he's smiting the wicked by pelting them with rocks or a group of Wastrels that use rubber ducks to capture and eat real ducks. There are also people who won’t take kindly to Arthur entering their home and snooping around, which leads to random weapons being hurled at him in order to chase him away. 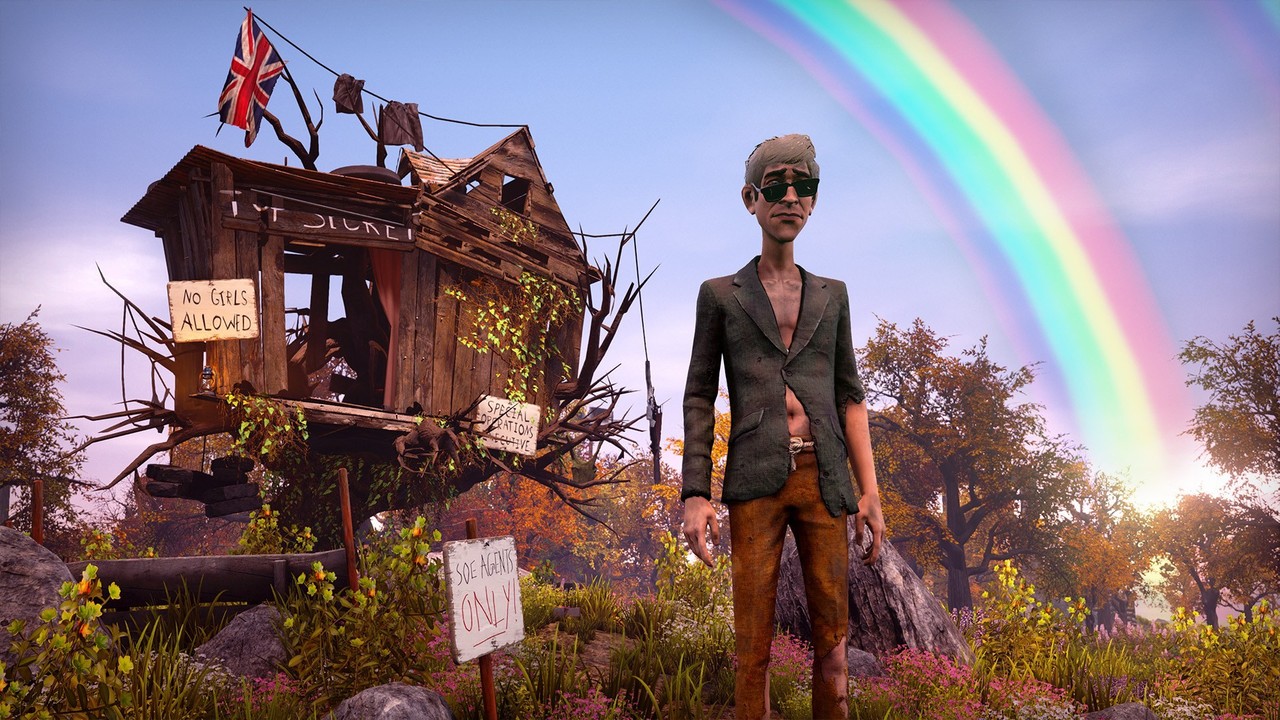 While there have been many comparisons between We Happy Few and the BioShock series, the gameplay of this title is a bit different. As Arthur progress through the world, he’ll eventually become hungry, thirsty, or sleepy, which gives this title more of a survival feel than anything. He’ll also be able to combine items he stumbles onto to create helpful tools, healing balms, and new clothing to help him fit in with his surroundings. The latter plays a big role as you’ll come across different Wellies who will either accept or detest you based on your appearance.

The alpha has some main objectives and several side missions to complete, the majority of which will reward you with new items or recipes. I came across a number of main objectives that were incomplete, one in particular required Arthur to follow a ghost while on Joy in the middle of the night. The ghost didn’t move, so I was unable to follow her to then complete the mission. I didn’t come across a lot of these, but it’s a stark reminder We Happy Few is nowhere near completion at this point.

Not Yet a Bundle of Joy

We Happy Few’s alpha offers a nice glimpse of what’s to come from the complete game, although I don’t believe it’s something most players need to get into at this moment. With its lack of single-player narrative and it being a work-in-progress, you can skip your dose of Joy for now and take your mandatory prescription once Compulsion Games fine tunes the game a bit more.