Star Wars has been a key pop culture franchise that's been tied into the gaming experience and part of that has been out of a desire to relive that experiencing of seeing the original films for the first time. For many, that's been the thrill of a lifetime and there's been a longing to become a part of that world. Gaming has attempted to give players that sensation for generations. The results haven't always been great. But virtual reality is providing another new way to behold the magic of Star Wars and what I saw at this year's Game Developers Conference can only be described as potential for pure joy.

Star Wars: Trials on Tatooine has been described as a "cinematic virtual reality experiment" and after strapping on an HTC Vive, it's easy to see why. The demo immediately starts off with iconic series theme music and the opening text crawls that precede every film. At first, it feels like you're about to strap in for a movie and that feeling remains present even as the Millennium Falcon flies by after the crawl, heading for the desert planet of Tatooine. 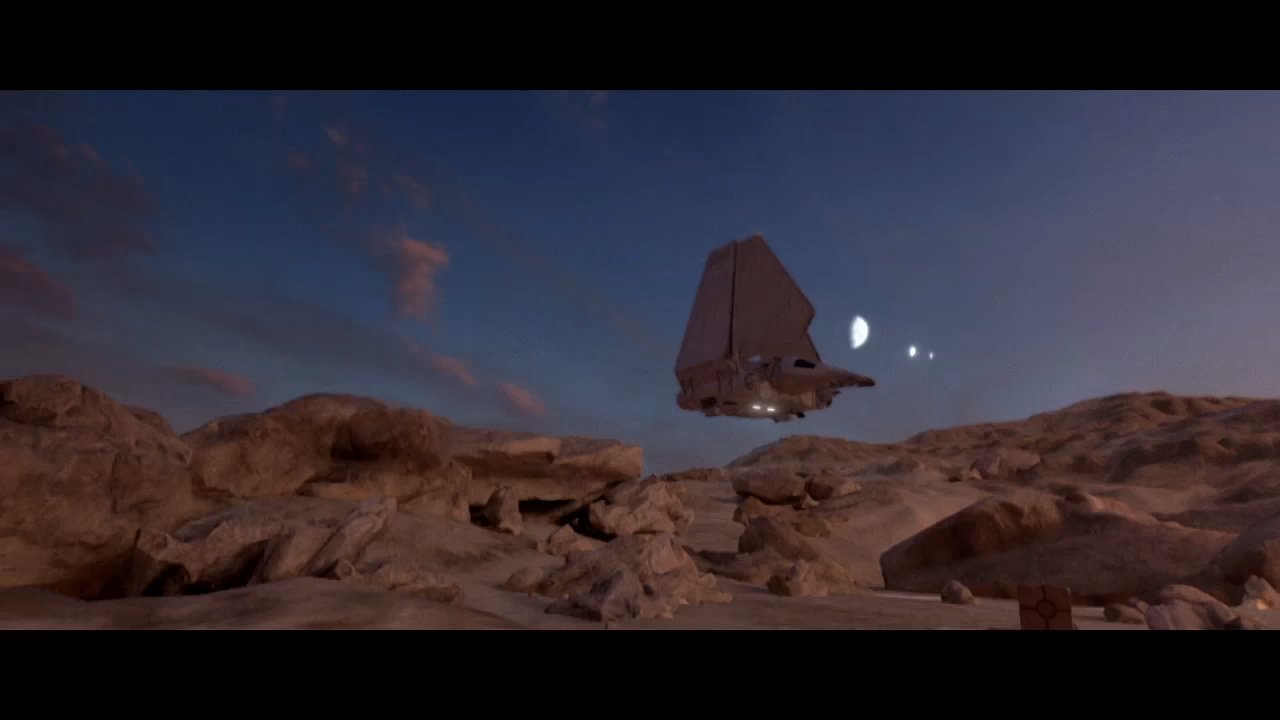 That's when the demo begins proper, as the scene shifts to the sandy surface of Tatooine near a landing bay. There are no prompts and I quickly wondered whether I was supposed to do something, but after about a minute, the Falcon came in for a landing. The voice of Han Solo radioed in from aboard the vessel, addressing me as one of Luke Skywalker's Jedi students. Han swung by to drop off R2-D2 to help out with further Jedi training. The demo then showed off more of its visual prowess, taking a time out for the Falcon to shoot down a pair of TIE Fighters that had followed it to the planet. Quickly after that, the Falcon showed its age when one of its inhibitors quickly broke down. The idea was then to step forward and help bring the part down, assisting Han with repairs by reaching out and pressing buttons, both virtually in-game and on the HTC Vive controller.

A Stormtrooper ambush soon arrived and that's when the true potential of Trials shone through. R2 passed along a lightsaber and the idea was to deflect incoming blaster fire and send it back at the troopers. The Vive's fidelity was on full display, intuitively allowing me to aim at the incoming wave of blasts. Compared to clunkier experiences, like 2012's Kinect Star Wars, this felt like a rush and showed that being a Jedi is closer than ever before.

While the demo doesn't seem to point to a full-blown game, it succeeds in showing not only what Industrial Light and Magic's ILMxLAB is capable of producing, but also that a true Star Wars experience is entirely possible in virtual reality. All of the pieces appear to be there, thanks to the fidelity of the HTC Vive hardware and ILMxLAB building on Epic's Unreal Engine 4.

Trials on Tatooine is being billed as a proof of concept, but that doesn't mean ILMxLAB is stopping there with Star Wars. Throughout this week, the studio has indicated to IGN and io9 among others that a more story-based Star Wars experience may be on its way in the future.