Whispers of War: Breaking down the first Hearthstone 'Whispers of the Old Gods' cards

Earlier today, Blizzard revealed the latest expansion for Hearthstone: Heroes of Warcraft. The inn is in a state of chaos, as the Old Gods have risen and are corrupting the previously-pure minions that inhabited it. Lead Designer Ben Brode and Senior Producer Yong Woo revealed a handful of new cards this morning and Shacknews is wasting no time in breaking down the first new minions from Whispers of the Old Gods.

Oh, dear! What have they done to the adorable Loot Hoarder? He's become a foul symbol of avarice, whose strength has been slightly enhanced by the power of the Old Gods. Polluted Hoarder will offer the same Deathrattle effect, but he'll come at a slightly higher cost. Are those increased stats worth a play? It'll ultimately depend on how frequently you use Cult Master.

Antique Healbot may be on its way to the junkyard thanks to the upcoming switch to Standard mode, but its presence isn't being removed entirely. But this is an example of the Old Gods not only altering stats, but also effects. In the case of Corrupted Healbot, it's a brutal effect. While 6/6 can be decent stats for a 5-cost minion, giving your opponent back 8 Health can be costly and may not be worth the trouble. Although, if you play it with Auchenai Soulpriest, you may have a much more dangerous Zombie Chow on your hands.

Hey, it turns out Doomsayer was right! The end is coming! And Validated Doomsayer is here to rub it in everyone's face, like a jerk. At a cost of 5 mana, he'll carry his panicky doppelganger's 0/7 stats, but if your opponent doesn't deal with it immediately, that Attack stat becomes 7.

Validated Doomsayer will have plenty of uses, but there are a few things that users should be aware of. Its effect ensures that its Attack will reset to 7 at the start of all of your turns. For Paladins, that means attempting to subdue it with Aldor Peacekeeper or Keeper of Uldaman won't work. Likewise for Priests, that also means you can buff it with Divine Spirit, but don't waste an Inner Fire on it.

What in the world is C'Thun? (Humor me, World of Warcraft players.) And what is this minion that's giving it +2/+2? Patience, reader, we're getting to that! Beckoner of Evil boasts some rather unimpressive stats on her own. There are certainly a vast share of 2/3 minions out there, so anyone that plays her is going to do so solely for the effect. So just how good is this effect? Well, let's put it this way. You may want to play her with Brann Bronzebeard.

What's a C'Thun again? We're getting to that!

With Spider Tank going bye-bye thanks to the switch to Standard, something needs to replace those reliable 3/4 stats for a low 3-mana cost. So here's Twilight Elder, which is certainly going to be a useful minion on its own, even without its effect. The downside is that it won't share that same synergy that Spider Tank did with other mechs, but those that just want the stats will now have that option available to them.

As for that effect, seriously, what's a C'Thun?

You really want to know? 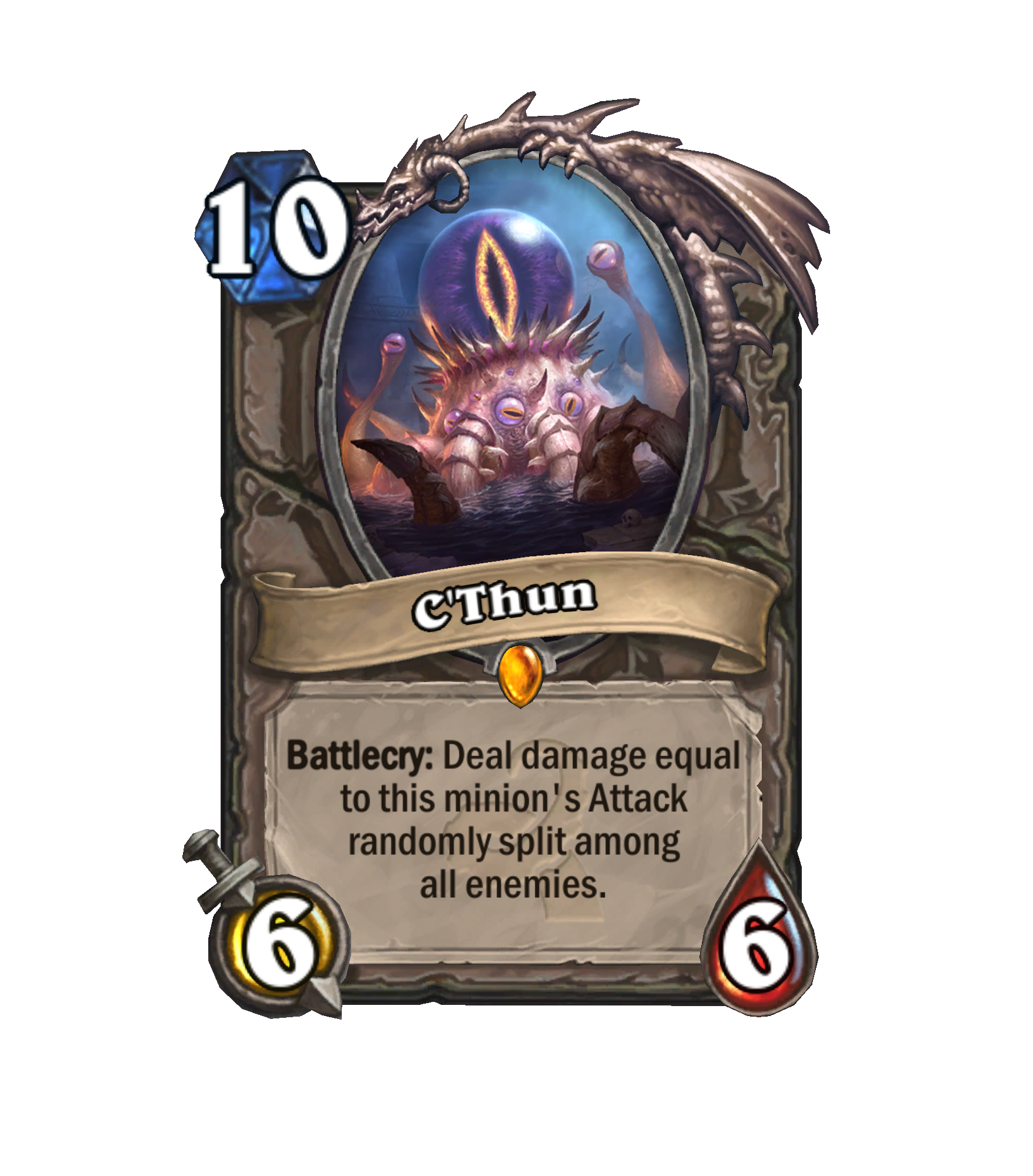 World of Warcraft players recognize C'Thun as one of the ultra-powerful Old Gods and now it is spreading its noxious evil to Hearthstone as the latest legendary minion. On its own, a 6/6 minion for an obscene 10 mana doesn't sound like anything to be afraid of, but trust me, this thing is Nasty with a capital 'N.' And it's more than just its Avenging Wrath-like effect that make it a frightening piece of work.

Take a look at the Beckoner of Evil and Twilight Elder effects again. Yes, they'll not only boost C'Thun, but C'Thun doesn't even have to be in your hand for the boost to take effect. That means by the time Turn 10 hits, C'Thun can boast well over double-digit stats and it can deal out that double-digit damage immediately upon hitting the board, meaning it can clear out all enemies and, in the right circumstance, can even end the game outright. Its effect widely outclasses whatever Arch-Thief Rafaam can offer and the fact that it doesn't have to be in your hand makes it a far, far superior option than the departing Bolvar Fordragon.

On top of all that, I recently had a chance to try out all of these new minions. Guess what? If C'Thun gets called back by a Youthful Brewmaster or anything with a similar effect, it retains its boosted stats! That is just sick! And currently at this moment, there is no counter to C'Thun's Battlecry. The only way to stop it is to go completely aggro and end the game before Turn 10.

Add all this to the fact that anyone that gets a Whispers of the Old Gods pack at launch will get this legendary for free, it is going to terrorize the meta as everyone knows it. Practice your aggro skills, because you're going to need them.

That's just the beginning, though. C'Thun plays nicely with a lot of existing Hearthstone minions, both in Standard and Wild. To discuss his synergy possibilities, come back to Shacknews later today, where I'll break them down a little further.