Insomniac has often managed to distinguish its games from its peers through the use of memorable characters. It's the house built by Ratchet, Spyro, and Outernauts, among many others, and all of those characters have had flashy and light-hearted personalities. But this new effort from the developer is something that feels distinctly different. It feels somber. It feels darker. It feels moody. And it definitely feels interesting.

This is the story of Merryn, a 12-year-old girl living on the shores of Ireland. Her exposure to the outside world comes mainly from listening to the outrageous tales of her sea-faring father. She would find herself enraptured by his encounters with magical creatures of the deep, lost undersea cities, and fantastic treasure. But one night, her father does not return, prompting Merryn to craft a makeshift vessel to seek him out. This is the story of Song of the Deep and Shacknews recently had a chance to try it out. 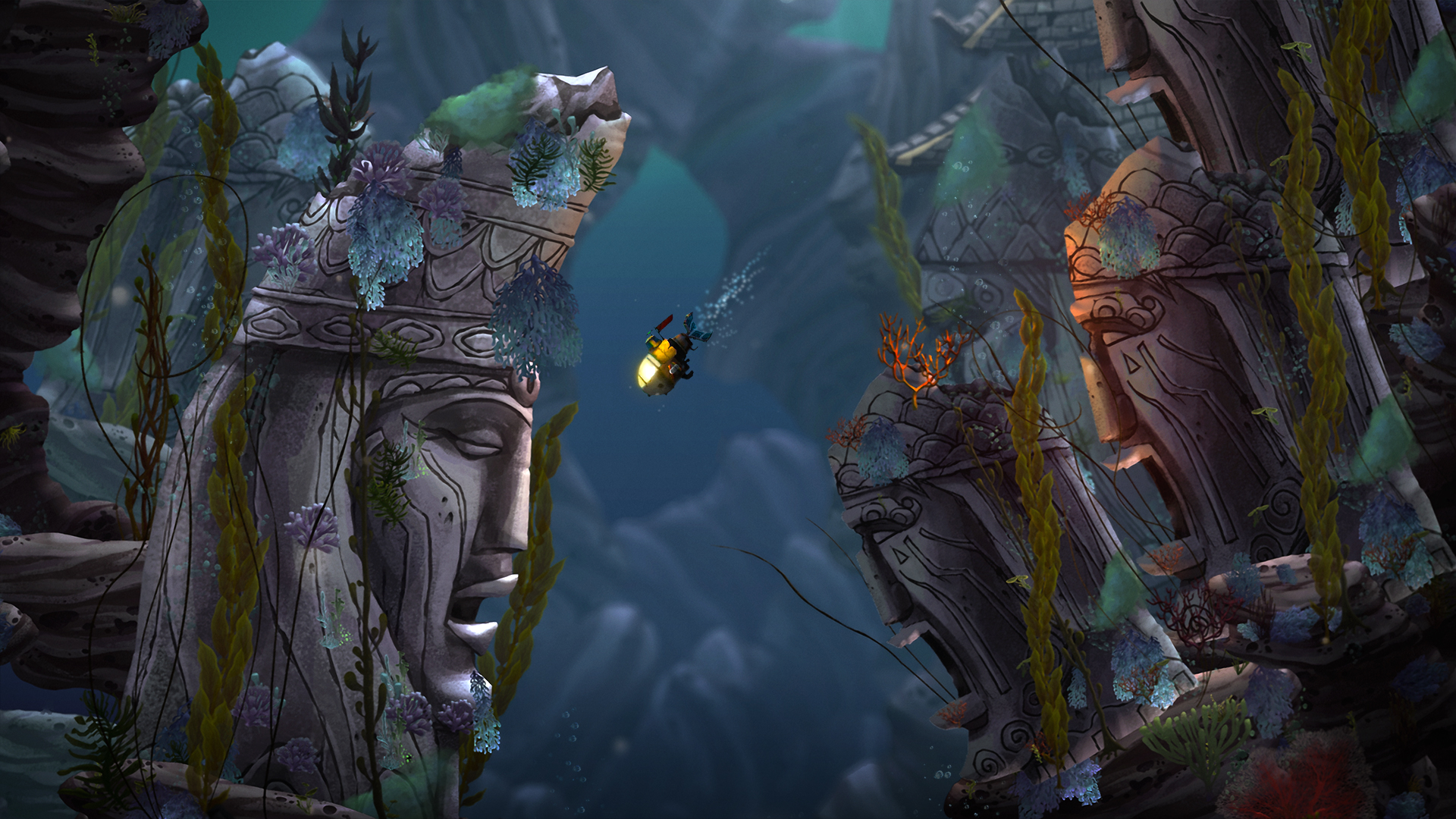 While the backstory is set to the visuals of a child's picture book, Song of the Deep is best described as an undersea side-scrolling Metroidvania. Merryn quickly finds herself going from the surface world she's become so used to into the depths of a lost world called Fomori, as she quickly learns that her father's tall tales were actually true. There's a great sense of wonder and imagination at work here, with gorgeous oceanic backgrounds on display across dilapidated ancient architecture.

But just as Merryn's father was telling the truth about a lost world, he was also truthful about the dangers he encountered. The world is filled with hostile creatures, like lantern jellies, and they all come in numbers. Merryn's makeshift sub can fire torpedoes to defend itself, but it runs on finite Tyne energy. Once it's out, so are the torpedoes, so it's wise to know where in the world Merryn can refill her Tyne supply. Along the way, Merryn will be able to upgrade various aspects of her sub, like her Tyne meter, her weaponry, and even some unspecified upgrades that have yet to be revealed.

The puzzles I encountered over the course of the demo were mainly about shining colored lights in different directions to set off switches. This mainly involved another tool in the arsenal, which was taking Merryn out of her sub to move things around herself. In the case of a few later puzzles, Merryn could flip switches, move mirrored surfaces aronund, or reflect lights off one of her own mirrors to direct laser lights elsewhere. A lot of trial and error is involved here, since lights will bounce off mirrors at different angles and won't always go towards the right direction. There are other different spots in the world where Merryn can exit the sub and squeeze herself through narrow spaces, but player should excercise extreme caution here. Merryn only has a sliver of health, compared to the sub's health meter, so it won't take much direct contact to spell her doom. 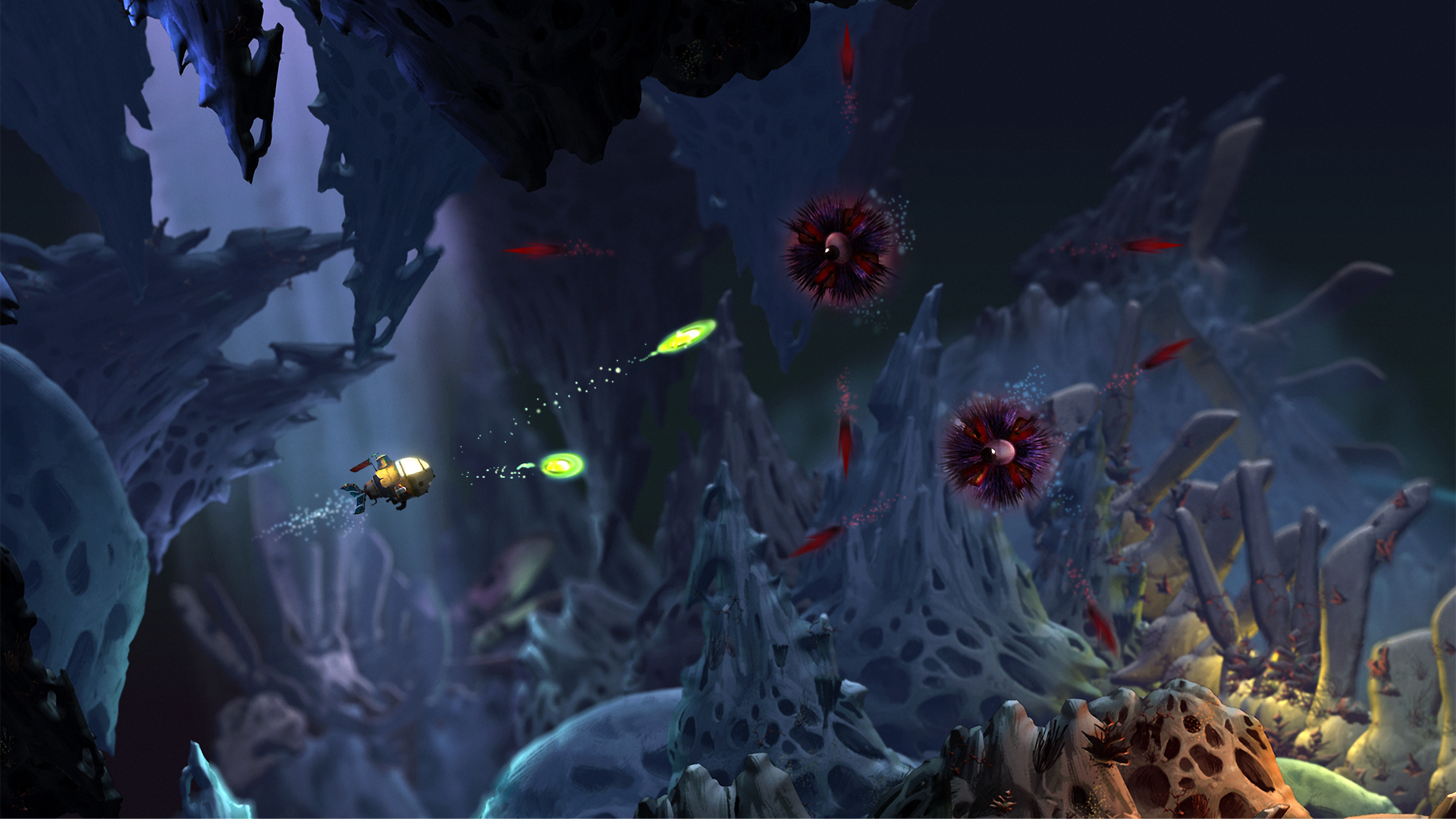 Other puzzles involve the game's Metroidvania formula. Merryn has equipped her sub with a claw arm and that will be essential in grabbing important items and finding places for them. One situation required a loose statue piece to be placed back on its shoulders, but it was hidden behind a closed gate. Moving forward required pulling a nearby switch and chucking the statue piece through the newly-created opening before the gate shut, requiring quickness and timing.

Song of the Deep looks to be the beginning of something special for Insomniac. Conceived by Chief Creative Officer Brian Hastings, the story was inspired by his daughter and has come to include elements of Irish mythology. There looks to be more to the story, as Insomniac is aiming for a number of tie-ins to the game, which includes a chapter book aimed at younger readers. Along for the ride is GameStop, as part of a new partnership that will see the retailer take on a new role: publisher. While GameStop will not offer any input into the creative process, it will put its significant marketing muscle behind Song of the Deep. It will put its efforts towards working on the merchandising front, while also acting as the game's exclusive retailer.

But while GameStop will be the sole retailer to offer physical copies of Song of the Deep, the game will be available across all digital retailers. Look for Song of the Deep to go under the sea later this year on PC, PlayStation 4, and Xbox One.