After exploring a modern-day theater of intrigue featuring 21st century despots, the Far Cry series is looking to go back to basics, in more ways that one. The latest entry in the series, Far Cry Primal, moves away from the modern day entirely and ventures into the prehistoric past. To get a look at what awaits in the Stone Age, Shacknews recently went hands-on with the next Far Cry game.

Story details are miniscule for the time being. Part of that is intentional. Players take control of a prehistoric human named Takkar, a hunter-gatherer whose main goal is simply survival for both him and his tribe. The world is filled with dangerous creatures, as well as hostile rival tribes. But while Takkar doesn't have modern-day firearms or gadgets at his disposal, he definitely has his own survival tools that makes the Far Cry Primal setting a dynamic adventure in itself. 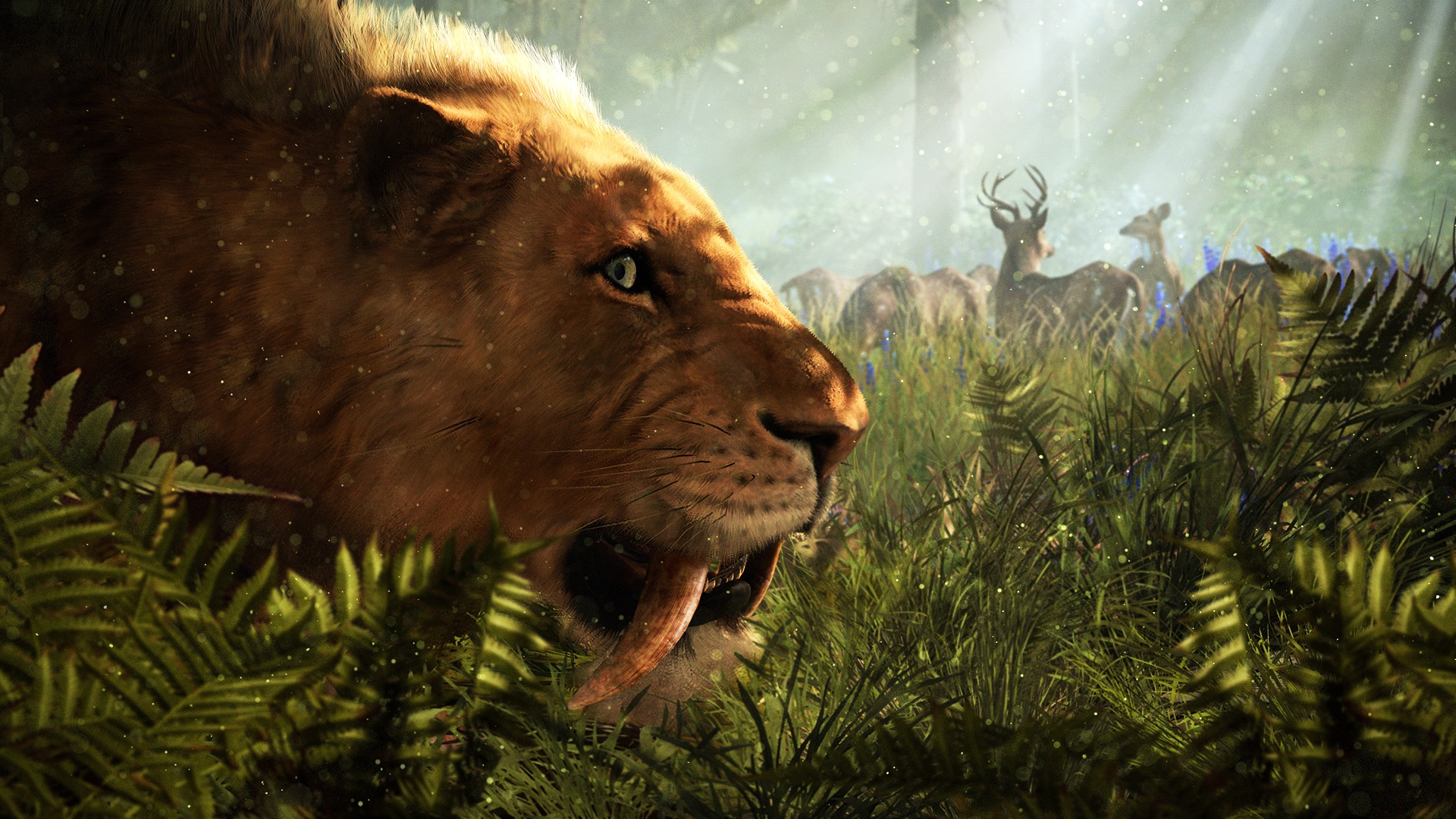 Takkar's arsenal isn't glamorous by any means. He wields heavy clubs, spears, and a bow, all of which can be crafted through a simple crafting system. Any of these weapons can also be lit on fire to help ward off enemies and predators and given how often something can leap out of the plants, that's definitely a welcome addition.

What makes Takkar so fearsome, however, is his ability to tame and control the world's wildlife. While Far Cry Primal will continue the series' penchant for killer wildlife, Takkar can exert his dominion over them by luring them in with bait. Upon winning them over, these wild animals become faithful companions. About a dozen different animals can accompany Takkar over the course of the game, each with their own distinct advantages. A wolf, for example, can warn players of nearby dangers by growling. A jaguar can use its speed and stealth to quickly pounce on unsuspecting targets. There's even a bear, which is so intimidating that it scares off a fair amount of predators through its sheer presence alone. 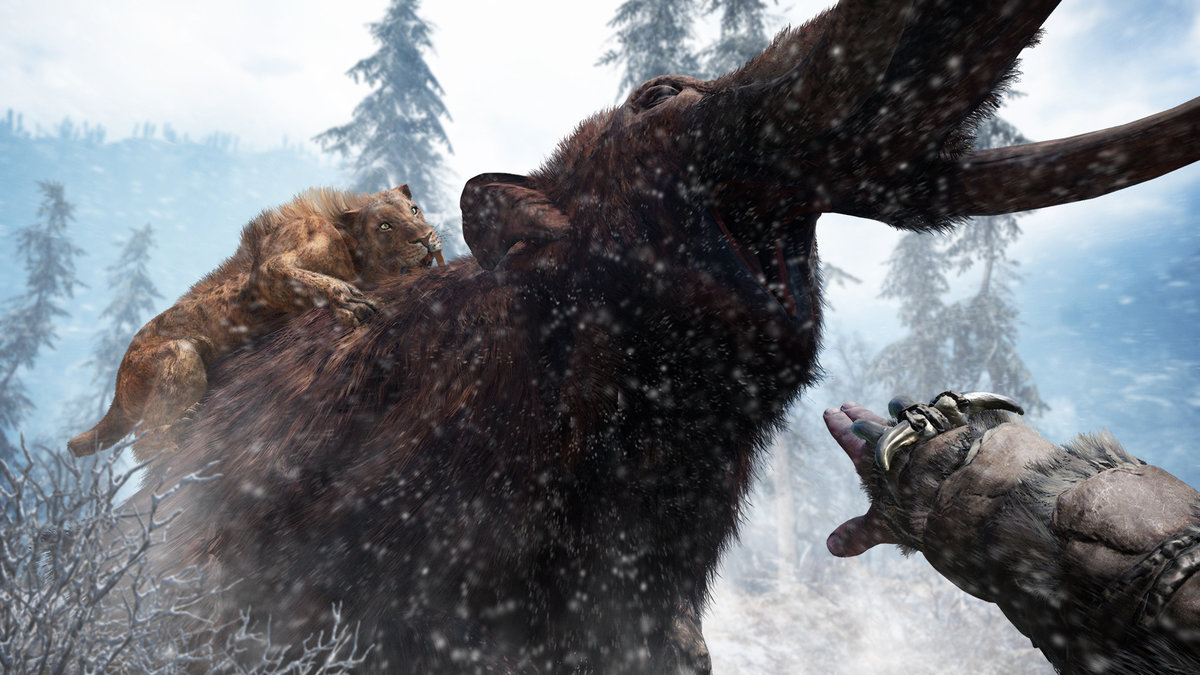 Takkar also carries a trusty owl along with him, which can be used to scout distant areas and tag potential hostiles. He can also be upgraded through the game's skill tree to drop weapons or swoop down and kill foes. While Far Cry Primal will include the killer birds of prey from the previous Far Cry games, the player will now have one of their own to inflict pain with.

With that said, any of Takkar's animals can be ordered to pounce on targets, whether they're hostile tribesman or wild animals. Beast kills will provide bonus XP that can be put towards Takkar's skill tree. If they incur any damage over the course of a struggle, these animals can be healed with meat from Takkar's inventory. Likewise, that means that players shouldn't get careless when picking fights with predators. There's almost always something out there that's more than a match for your pet. At one point, I bumped into a sabretooth tiger that was able to take down both my jaguar and my bear. If a pet goes down, it'll take two red leaves found in the world to revive them.

The best thing to say about Far Cry Primal is that the spontaneous stories of wild occurrences are still there. I can remember taking on a tribe of enemy cannibals with my jaguar, getting close to one of the foes getting their jugular ripped out, only to notice that it was actually a wild jaguar and not my own. I can likewise remember trying to switch out animals to my wolf, only for my wolf to literally get intercepted out of nowhere by a wild bear that killed it and then killed me. 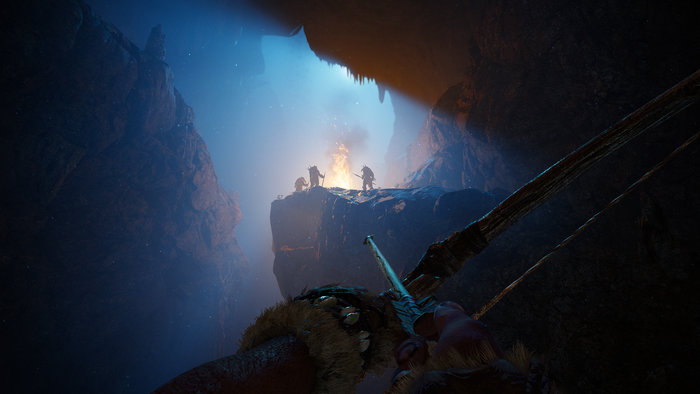 Exploring the world is a fun time in itself, which is probably for the best, since there doesn't seem to be much story to Primal at the moment. While Ubisoft is noting that story details are coming later, it's easy to notice that the fortress rushes and the chaotic co-op of Far Cry 4 are sadly nowhere to be found. This is a purely single-player effort and while I love some good open-world chaos as much as the next person, I'm hopeful to see some strong story content to go along with this struggle for survival.

Far Cry players should prepare for the jump to the Stone Age early next year when Far Cry Primal arrives on February 23.