In recent years, Telltale Games has put its focus on more adult-oriented licenses. The Walking Dead, The Wolf Among Us, Borderlands, and Game of Thrones certainly lean more towards older audiences, so it's interesting to see the studio go back to its more family-friendly roots and focus on the world of Minecraft.

Minecraft: Story Mode takes the Minecraft world and crafts an entirely original tale from scratch. The characters are new, the lore is new, but there's also a lot of elements that Minecraft fans will recognize, including the voxel visual style. While the familiar elements will resonate with Minecraft fans, it doesn't take a hardcore builder to enjoy the story that Telltale is putting together and "The Order of the Stone" is certainly off to a good start. 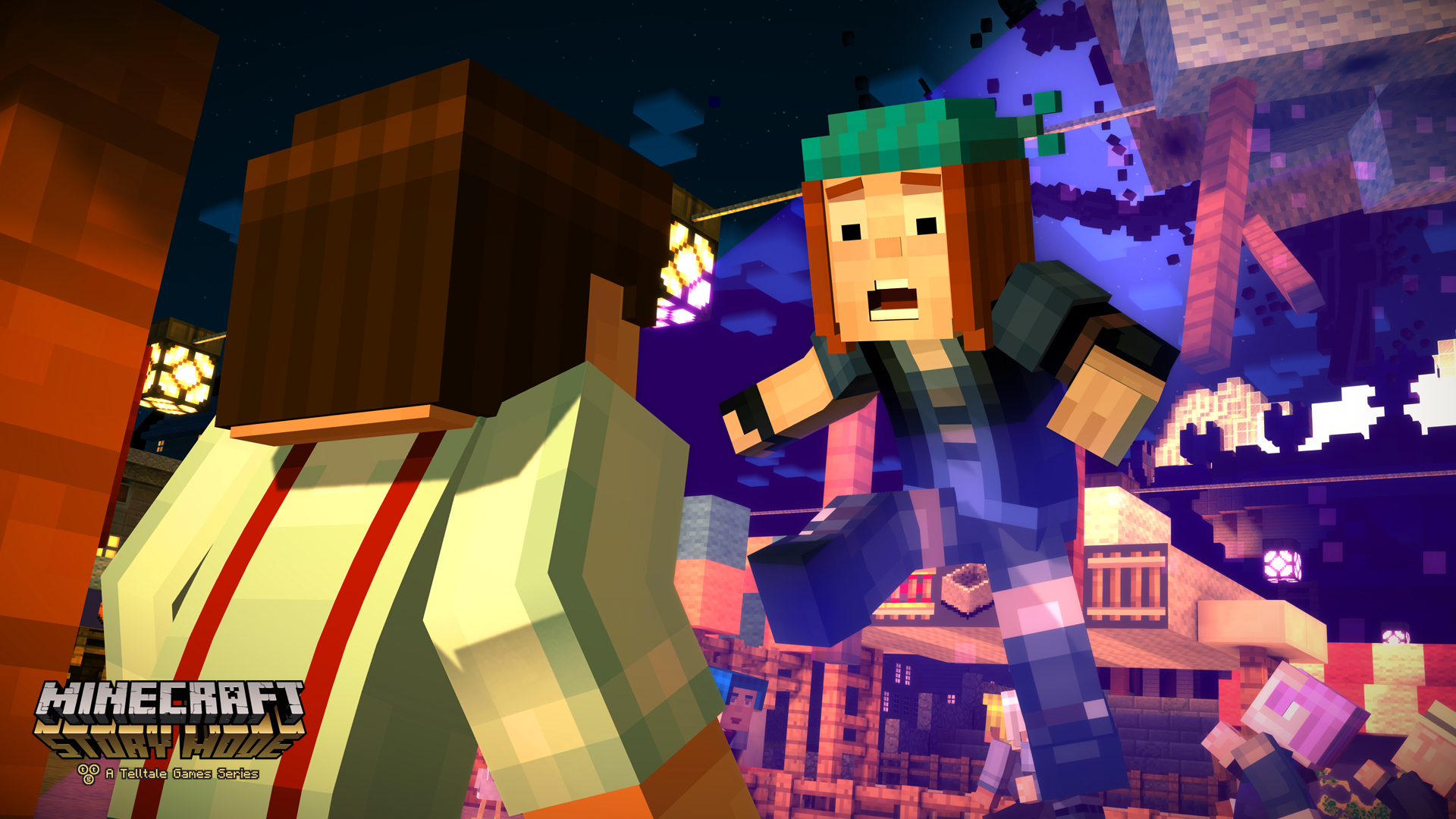 "The Order of the Stone" begins by setting up the world as one protected by four great heroes. This segues into the story proper, as players meet Jesse and his/her band of friends, who strive to become master builders. Their path soon crosses with an embittered warlock, who unleashes a powerful creature onto the world, requiring Jesse's party to reunite the fabled Order of the Stone to stop it.

Anyone that has played Minecraft will recognize some of the game's elements sprinkled into the game. When night falls, Jesse will be confronted by zombies, Creepers, or spiders. When combat is triggered, the Minecraft health meter will appear in the corner. When quick-time events prompt players to build structures, the party will piece together buildings in double time. But the most faithful element of Mojang's game that can be found in Story Mode is the crafting itself.

Several areas of the game will require Jesse to assemble tools to move forward. For Minecraft newcomers, there's a helpful recipe guide that adds a new crafting wrinkle to the traditional Telltale story. For veterans, however, the recipes are exactly the same as they are in the original game, adding a sense of authenticity. It'll be interesting to see how this mechanic evolves in subsequent episodes and whether players will get a chance to piece together different items for different situations.

As a family game, Minecraft: Story Mode works in the sense that it's much lighter fare than recent Telltale offerings. There's an abundance of humor, lovable characters (including an adorable pig sidekick), and a brightly-colored world. There's some colorful language in the story that takes this into more PG-rated territory, but nothing overtly offensive. As a story in itself, however, Story Mode embraces the Minecraft aesthetic and runs with it. So far, Telltale is successfully telling a story that utilizes many of the Minecraft mechanics. It even makes the primary character's gender choice a factor when it comes to interacting with certain characters. There were certain supporting characters that could either be a best friend or romantic interest with Jesse, depending on the gender choice, with the language and dialogue cleverly used to support both sides.

The building blocks for something special are certainly here in Minecraft: Story Mode, with the seeds for a classic 80s movie-style adventure in place. Thus far, it's a tale that fits perfectly within the Minecraft universe without forsaking those that aren't necessarily master builders.