Since Yoshi embarked on his first solo adventure back in 1996, he's stuck to something of a safe formula. In some instances, it's been a total detriment. Yoshi's Wooly World decides to go in something of a different direction, with a complete visual overhaul that winds up amplifying the cute factor exponentially. But the greater result is something of a reinvention of the traditional Yoshi's Island formula, offering many of the series' familiar mechanics, but working with the new art aesthetic to piece together something wholly creative. 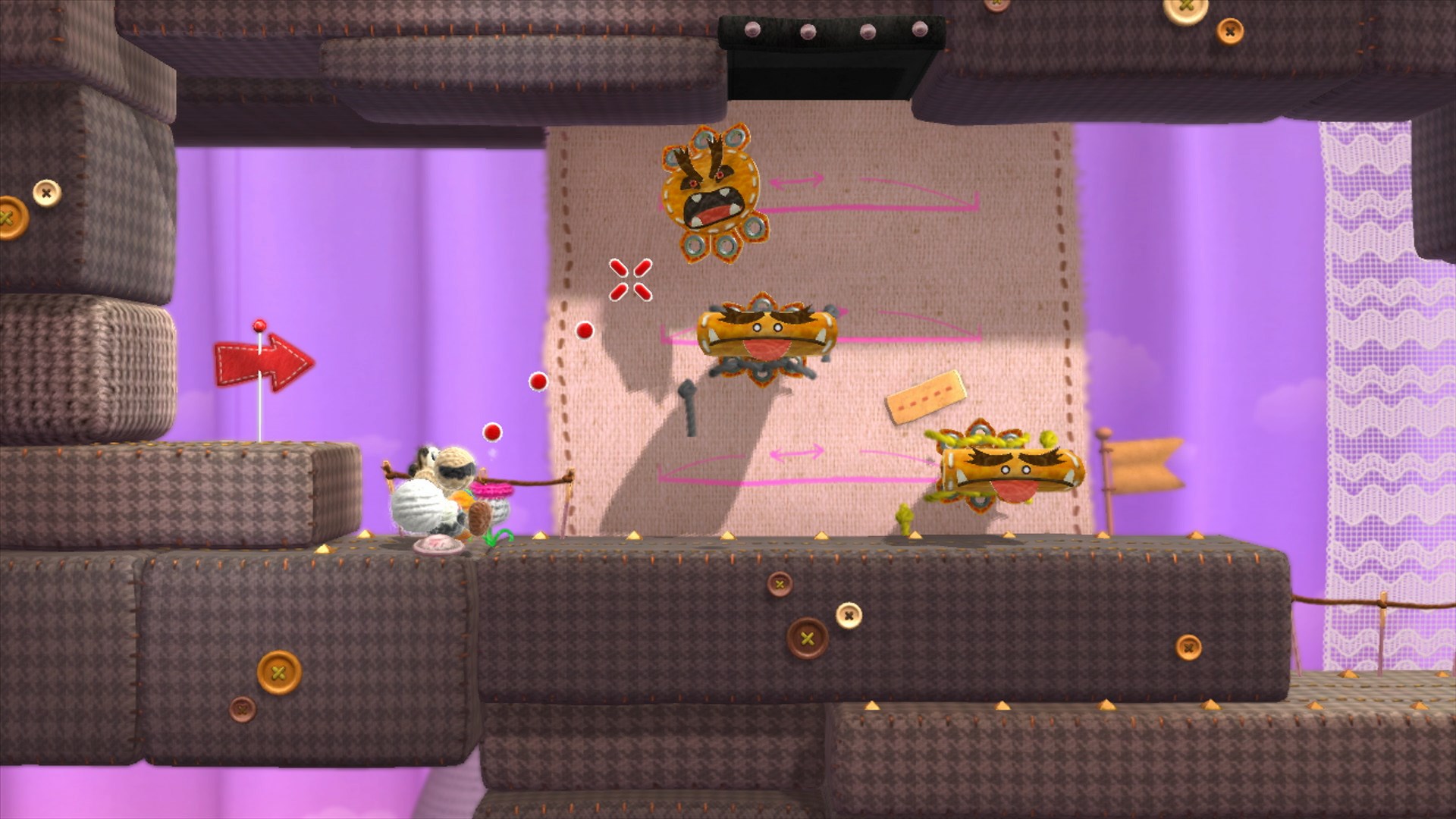 Yoshi's Wooly World should feel as familiar as an old sweater. The platformer's formula largely remains unchanged, with players taking Yoshi across a series of platforming stages, eating enemies to create eggs, and using old Yoshi mechanics to find hidden secrets and reach the goal. That idea remains intact and it would have been easy for developer Good-Feel to simply slap yarn textures on everything and call it a day. But it only takes a few stages to get the sense that some extra effort has been put forward.

With an entire world made of yarn also comes an entire world of fabric-based physics and all of it fits tremendously well with the Yoshi's Island formula. Enemies like Piranha Plants are wrapped up in string upon getting hit with eggs, certain Bullet Bill breeds leave smoke trails that act as tangible string, and entirely new platforms can be created by throwing yarn balls or by pulling loose strings. The yarn world has opened up new possibilities for secret areas, mixing together the classic idea of secret "?" balloons and centering hidden areas around pressing cloth together or similar fabric-based ideas. The Yoshi vehicles are back, with some utilizing new fabric-based ideas and all of them proving easy and fun to handle. 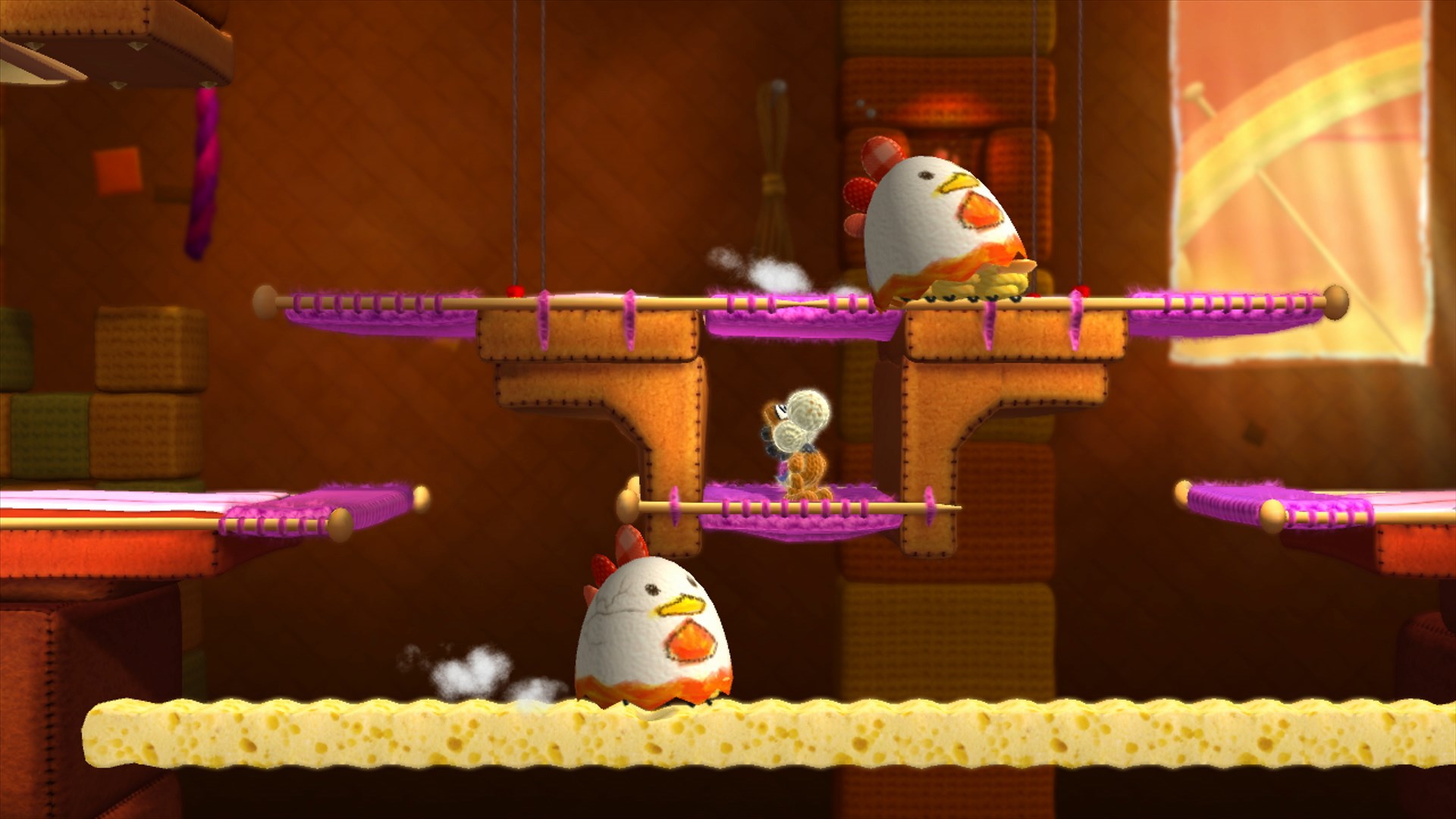 Some of Yoshi's previous outings felt content with taking the formula established back in the Super NES days and recycling them with a few slight changes. They felt less like a new effort and more like games that were marking off a checklist. That's not the case with Wooly World, which offers up some truly creative level design.

Much of that is owed to the game's visual style. One level, for example, will utilize ultraviolet fabrics in the foreground, with platforms and enemies only becoming visible when viewed behind it. Another level has players cling onto curtains and take a ride down a rack. There are tons of other little elements that make each level feel unique, whether it's Shy Guys wielding crochet hooks or lava made of bright orange blankets. What felt particularly refreshing about these ideas is that they were rarely overused. Stages that centered around a specific gimmick were only used once and as new concepts continued to be introduced into the final world, it started to feel like Good-Feel was progressively trying to top itself. 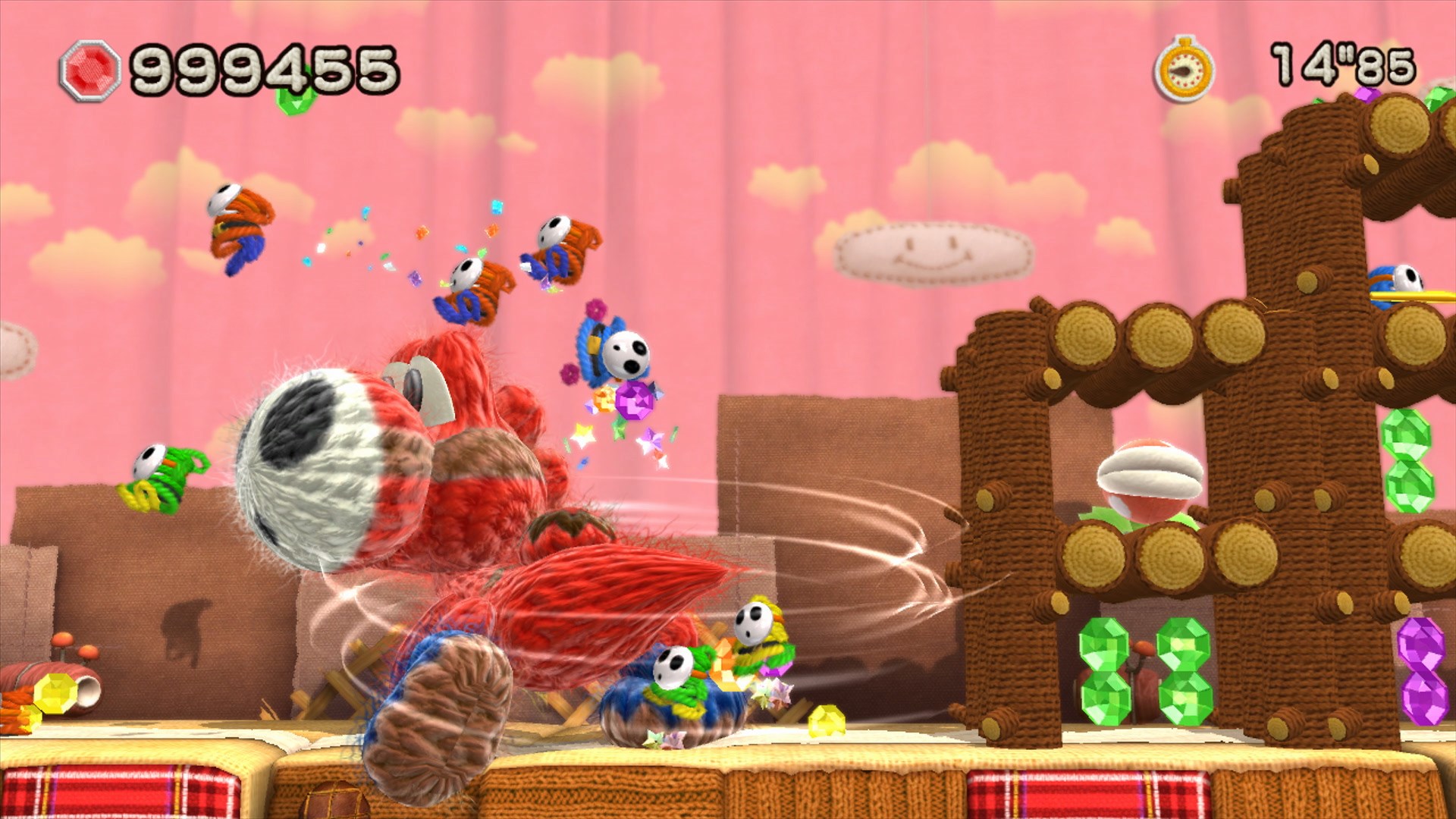 On top of offering some truly creative level design and some crisp controls, Wooly World also hasn't skimped on secrets or options. Players will find gems all over every stage and its purpose is mainly for currency that go towards power badges. Badges can either assist in clearing a stage (added defense or offering fire immunity) or in finding a stage's myriad of collectibles. Beyond the usual hearts and flowers, the main collectible involves finding five spools that assemble a new color of Yoshi at the end of the stage. The stage badges add a new way to play and offer a good reason to go back and try out some of the stages again, since they make finding hidden items a bit easier.

Sometimes, two heads are better than one, so another way to help find items is through co-op play. However, after attempting to play co-op for a night, it feels like the idea doesn't quite work so well for a game like Wooly World. With eggs flying around everywhere and the amplified challenge involved in platforming, players are more likely to get in each other's way than make any significant progress. With both players only sharing a single screen and the action going both horizontally and vertically, co-op often becomes more difficult than going solo.

Yoshi's Wooly World isn't content to repeat the franchise's usual ideas, nor does it forego them. Instead, Nintendo and Good-Feel offer something of a reinvention, making an old sweater feel like new again. It's easy to let your guard down with this game. It's sickeningly adorable. Yarn Yoshi makes the baby-like Yoshi sounds that have become such a recognizable element of the character, but now more brightly-colored than ever before. But behind this sugary exterior lies some of the most challenging stages the series has produced. Think of this less like a lollipop and more like a jawbreaker.

But like any good jawbreaker, it's worth sticking with and savoring its flavor. With fresh concepts introduced in each stage, lots of collectibles, and creative level and boss designs, Yoshi's Wooly World stands as Yoshi's best outing in a long time.

This review is based on a Wii U retail copy provided by the publisher. Yoshi's Wooly World will be available in on October 16 for $49.99. The game is rated E.