Square Enix has shown off a number of clips for the upcoming Final Fantasy XV. A lot of those clips have involved driving. But how about the story? What's the game's story going to look like? The latest trailer, titled "Dawn 2.0," won't do much to answer that, but it at least offers some sort of hint.

The latest Final Fantasy XV trailer is an update to a previous one, offering a look at Lady Lunafreya of Tenebrae (a.k.a. the Oracle), as she reflects on how she's reached the point she's currently at. New scenes are interwoven to reveal the conflict that she's endured over the years, while Noct can be seen leaning back on his father's car, while reflecting on his own past. Check it out below.

This will set the table for the next Final Fantasy XV Active Time Report, which is set to be delivered this Friday, live from this year's Tokyo Game Show. 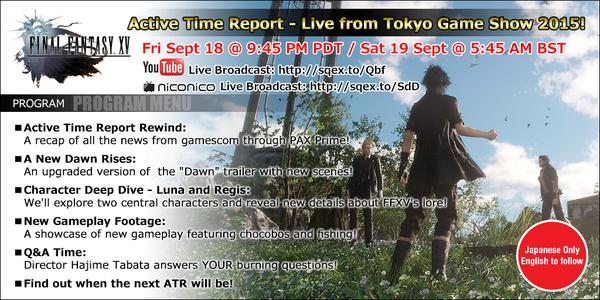 While that won't offer any new details on the game's eventual release date, it does look to shed some more light on what Final Fantasy players can expect from next year's installment of the long-running RPG series. And that includes chocobos and lots of fish.