There are several gaming trends that can be credited to the indie community and among them is the revival of local multiplayer games. The latest of these competitive efforts comes from the folks at Klobit, who are taking players back to the future. That's right, they're going back to 1999, for the anime-inspired Capsule Force.

The premise for Capsule Force is a simple one. The object of this 2D platforming shooter is to grab a "galaxy" orb from the opponent's side of the stage. To get there, players can only ride the moving trains on the middle or upper areas of the screen. Players must stop the opponents by shooting at them with their arm cannons or by holding down the fire button to unleash a powerful laser. 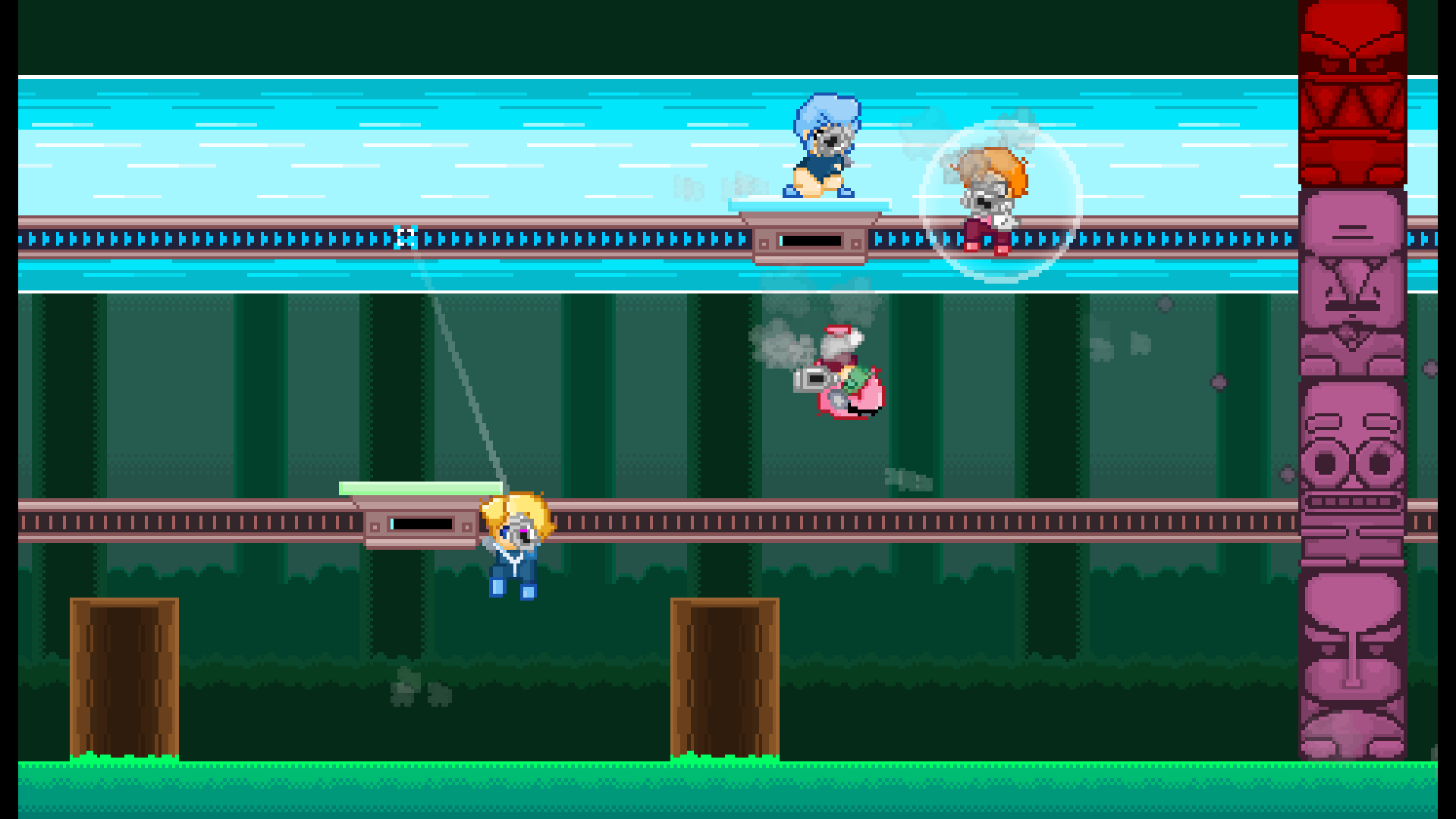 The platforming mechanics themselves are simple to grasp, with a double jump available to help dodge shots and a charge mechanic that can help players steady themselves in mid-air. The charge mechanic also helps to create the laser that can blast through shields, while also having the drawback of leaving players wide-open to enemy fire.

That can lead to some intense sequences, made more interesting by environmental hazards. Stage selection matters in Capsule Force, as each stage has its own variety of obstacles. This can include massive totem poles, laser-triggered cannons, or bouncy bubbles. The rub here is that only obstacles of the opposing team color can hurt you and the number of traps increase as teams get closer to their goal.

Capsule Force does suffer from some major omissions, however. Since most of the fun comes from four-player matches, it's unfortunate that there is no option for bot play. In fact, anyone that happens to be alone for the day doesn't get a chance to practice with the game at all and is relegated to the game's single-player Missions mode. AI bots could have helped fill some holes, since two-player one-on-one affairs don't tend to be nearly as memorable.

Also, those single-player Missions aren't just there for decoration. Many of the multiplayer's stages need to be unlocked by playing some of those missions first. And while that won't take much time at all, it is a little unusual to see a multiplayer-focused game lock some of its content behind a solo mode.

In terms of couch co-op games, Capsule Force has a uniquely colorful look and can be entertaining with enough people in the living room. As far as a solo experience, there isn't much beyond the time trial challenges and a two-player game just doesn't bring the same intensity. For one or two players, there are better options out there, but four friends may want to crack open a few bottles and give this one a look.

This review is based on a PlayStation 4 code provided by the publisher. Capsule Force is now available on PlayStation 4 and PC for $14.99. The game is rated T.