It's been a busy week at Gamescom for Blizzard, especially in regards to Hearthstone's upcoming Grand Tournament expansion. The card reveals keep on coming and Shacknews is breaking down another handful of them today, particular the remaining cards that were unveiled on Battle.net just a few nights ago. 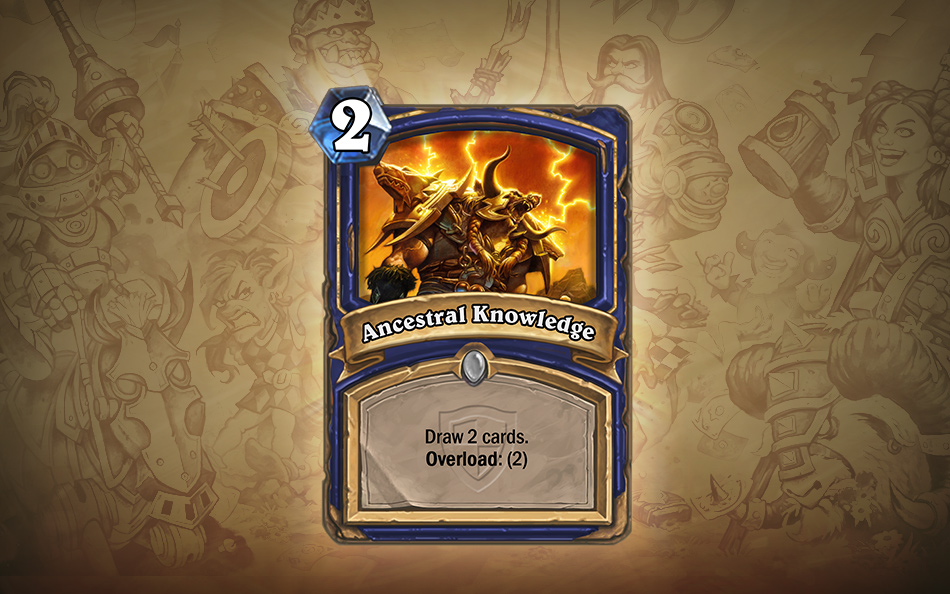 As with all collectible card games, having a healthy hand full of cards is often the key to victory. The Shaman now has his own version of the Mage's Arcane Intellect. And it's a cheaper one, to boot. But it wouldn't be the Shaman if there wasn't that accursed Overload drawback -- a fairly hefty one, too.

That's why Ancestral Knowledge may be best left to later stages of the game when Shaman hands may be running low. In particular, it could be key to help speed up the draws of some crucial game-turning cards like Ancestral Spirit and Reincarnate. That'll also be the right time to play Lava Shock and get those Overloaded crystals right back. Ancestral Knowledge has its uses, but definitely not during the early part of the game. 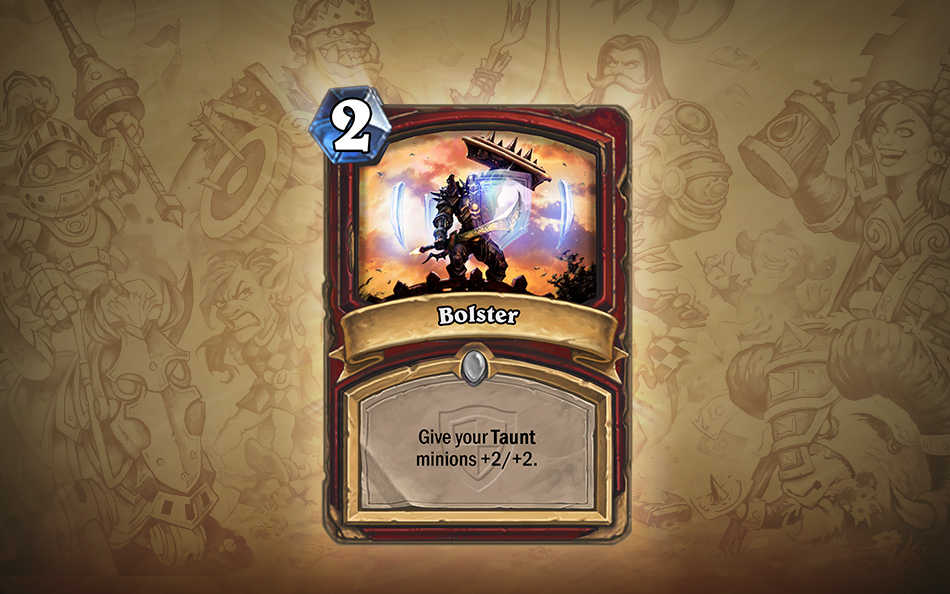 This is a cost-effective way for the Warrior to fortify his defenses if he has any Taunt minions on the board. Of course, the Warrior isn't really known for having a lot of Taunt minions. He's a brutal force of nature that strikes with weapons and armies of crazy drunks.

So if you don't have Taunt minions, make some! Recruit Defender of Argus or Sunfury Protector to make a quick pair of Taunt minions before beefing them up with Bolster. The former, in particular, already adds his own +1/+1, so that could be a potent combination for only 6 mana. Just make sure you have minions to spruce up with this combo. Maybe borrow some of those irascible drunks that are just loafing about. 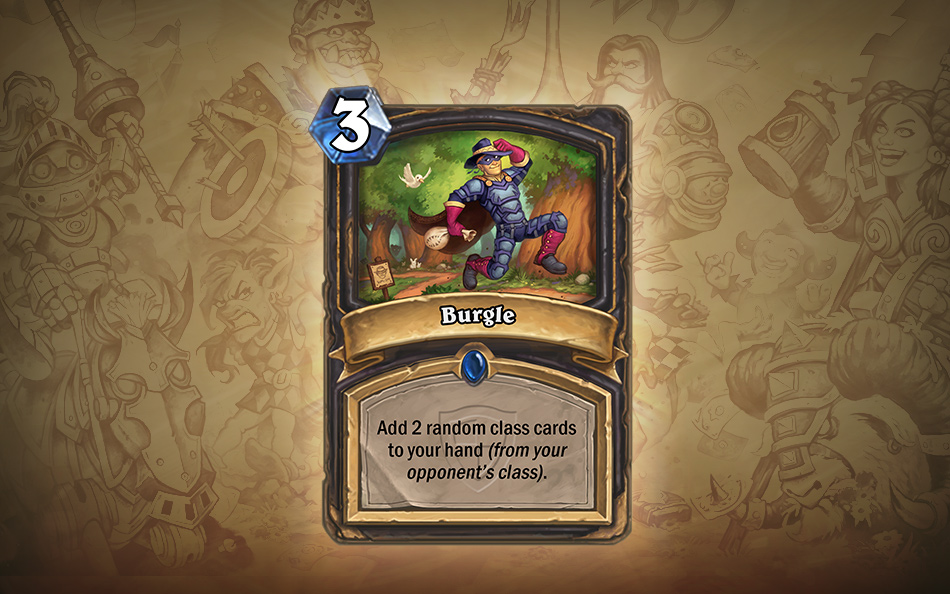 (3) Burgle - Add 2 random class cards to your hand (from your opponent's class).

Robble Robble! Clearly unable to get his hamburger fix anywhere in Azeroth, this derivative of a beloved licensed children's character now appears to be feeding his habit in Hearthstone, quietly becoming a tremendous spell in the process.

In many ways, Burgle is a much, much cheaper version of the Nefarian effect. The big difference is, this effect states that you get 2 random class cards, so minions are fully in play. In essence, think of it as a Thoughtsteal that's now usable by the Rogue. But with all opposing class cards in play, it's perfectly possible to wind up with some big-time players, like class-exclusive legendaries. Even the one-mana minions like Mana Wyrm and Northshire Cleric have their uses, which makes Burgle a pretty good spell that has more uses than drawbacks. It may even be a life-saver when reaching the end of the game, since there would still be 7 mana available to use any new cards. Robble Robble! 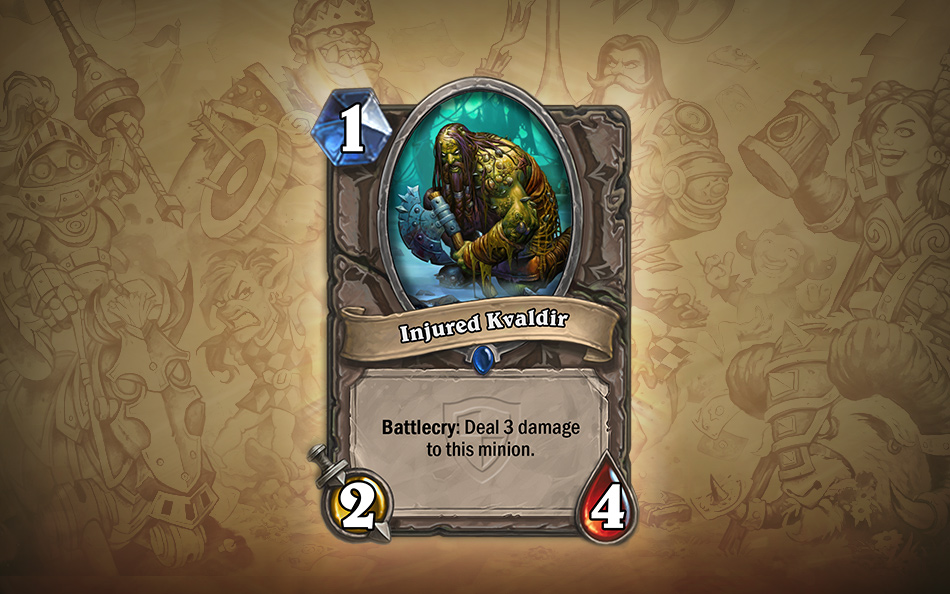 Here's an odd one. It's the 1-mana equivalent of Injured Blademaster. A first-turn use puts him on the board with 2/1 stats, so is he really any more useful than Clockwork Gnome or Leper Gnome?

He just might be for the Priest, who will often sit on a second turn with nothing to heal. Healing Injured Kvaldir on a second turn prior to its attack could give it an immense boost while buying to some time get something more substantial on the board. It could especially be helpful when playing it alongside Northshire Cleric. As far as opening turn moves, most classes have better options, but the Priest may want to think about this one. The Warrior might want to, as well, since Injured Kvaldir could play nicely with Crush or Rampage. 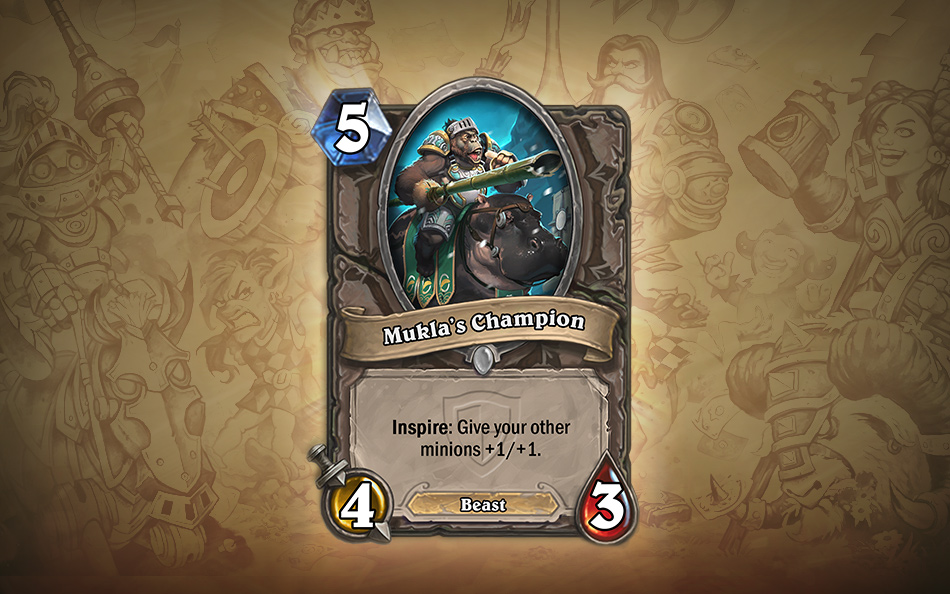 It's been a while since the Hunter got something that can bolster its deck. While Mukla's Champion is usable for all classes, its designation as a Beast means it'll fit right at home with the Hunter and its many Beast-enahcing cards.

Normally, good Face Hunters will have finished off their opponents by Turn 5, since there's often so little that unsuspecting opponents can do to really stop them, but Mukla's Champion could very well be the icing on the cake. A Hero Power in Turn 6 will give every minion an extra attack and since most Face Hunters will have littered the board by that point, this could very well act as a finisher. Expect to see this a lot in those particular Hunter decks.

Also expect to see this in plenty of Handlock and Zoolock decks, since Warlocks will be looking to draw cards frequently. This effect could especially hurt if the Warlock has decided to lay down his giants before drawing a card. 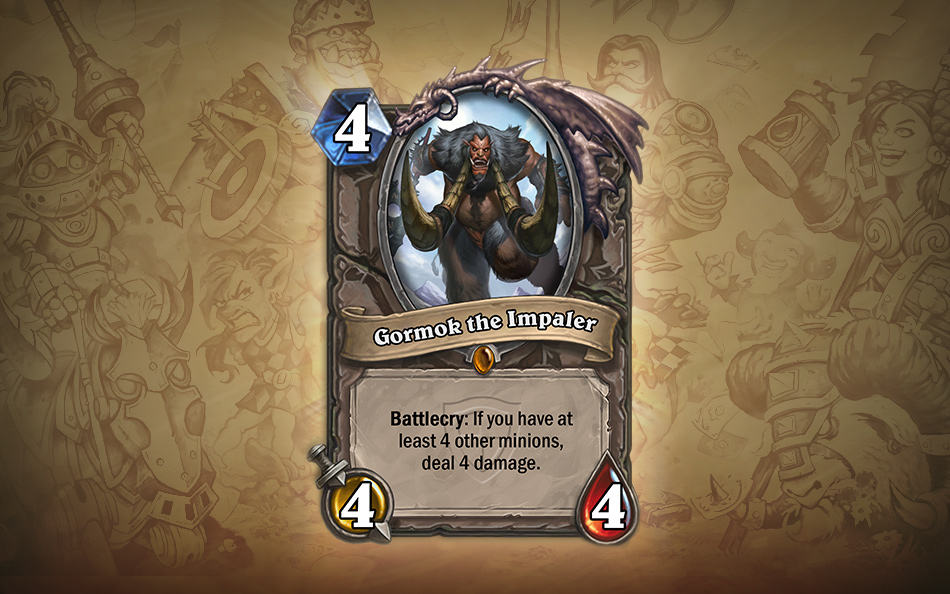 Speaking of Hunters, here's a Legendary that they'll likely get a lot of good use from. At a cheaply-priced 4 mana, its stats on its own are already pretty decent. It's the Battlecry effect that will really sell it. The Hunter will often laugh at this requirement, since Face Hunters will likely already have four minions on the board by about Turn 5 or 6. And if they don't, then Unleash the Hounds will fix that quickly.

But Gormok is fun for many other classes, too. The Warlock can often reach the 4 minion minimum by getting lucky with Imp-losion, while the Paladin can quickly reach that criteria with Muster for Battle. That effect is one worth having and since having four minions out isn't quite as difficult as it sounds, a lot of classes can get some good mileage out of this guy.

There's still plenty more to go with the reveals for Hearthstone's Grand Tournament expansion. Shacknews will continue its ongoing analysis of these new cards as they're released, so stay tuned for more, as we continue our series tomorrow.