The folks at Blizzard have been on a steady pace in revealing the 132 cards that will take up Hearthstone's upcoming Grand Tournament expansion. Shacknews' detailed look into these cards began just a few weeks ago and today, our analysis continues.

Be sure to catch up with our previous breakdowns: Part 1, Part 2, Part 3, Part 4 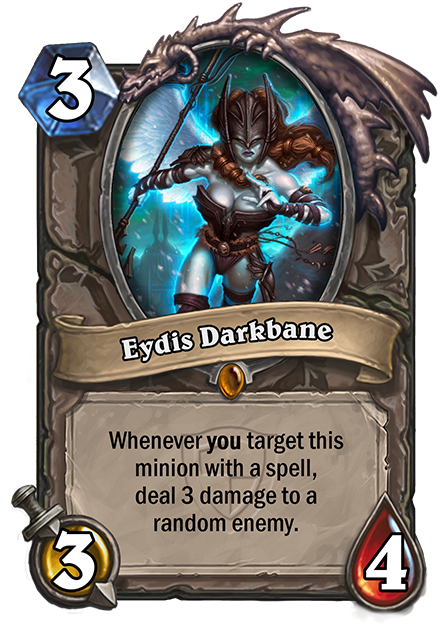 (3) Eydis Darkbane (3/4) - Whenever you target this minion with a spell, deal 3 damage to a random enemy

This will be one of the newer legendaries to hit the scene with the Grand Tournament and it's an awfully good one. The Mage has wreaked some major havoc with Flamewaker, even with its damage going all over the place. Eydis Darkbane, on the other hand, shoots out a more concentrated blast that could potentially take out a minion out entirely. That effect alone should make popular minions like Spider Tank mostly obsolete.

Eydis will likely be a staple of Priest and Paladin decks. Priests can get quick use out of her by quickly boosting her with Power Word: Shield or Divine Spirit, while Paladins can offer up quick 1-mana spells like Hand of Protection, Blessing of Might, or Blessing of Wisdom. This Lich King lieutenant can cause a lot of damage on Turns 4 or 5 with enough 1-mana spells and that's without even mentioning the potential damage that using Spare Parts can inflict.

But is she better than... 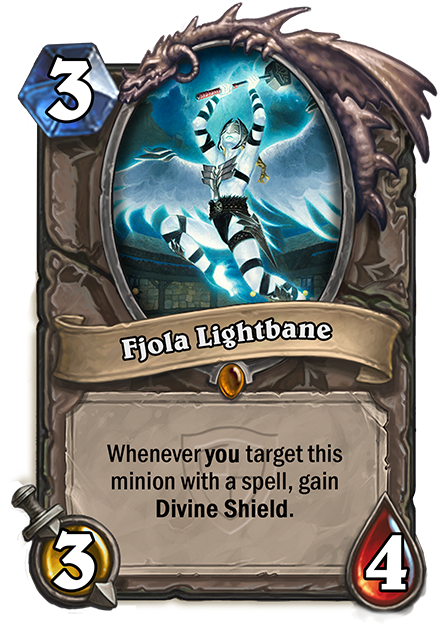 (3) Fjola Lightbane (3/4) - Whenever you target this minion with a spell, gain Divine Shield

Fjola carries the exact same stats and cost as Eydis, but her effect lends to different strategies. While Eydis is more about striking quickly with 1-mana spells, Fjola is meant more for the longer haul with spells meant to protect her.

Just like with Eydis, the Paladin and Priest will likely get the best use out of her. The Paladin will want to eventually boost her with Blessing of Kings to create a quick makeshift Force-Tank MAX. The Priest, on the other hand, can slowly strike by using Divine Spirit for a quick hit and immediately re-applying the Divine Shield by using Inner Fire. Fjola could be a real pain if not dealt with quickly.

But a dark horse candidate for Fjola could be the Warrior. In fact, she could potentially fit like a glove in Patron decks, since Whirlwind or Inner Rage will allow Warriors to apply the Rampage spell to get a 6/6 or 8/6 minion with Divine Shield. The Grand Tournament has introduced some interesting legendaries so far, but Eydis and Fjola fit into the current game so well that they may very well become staples. 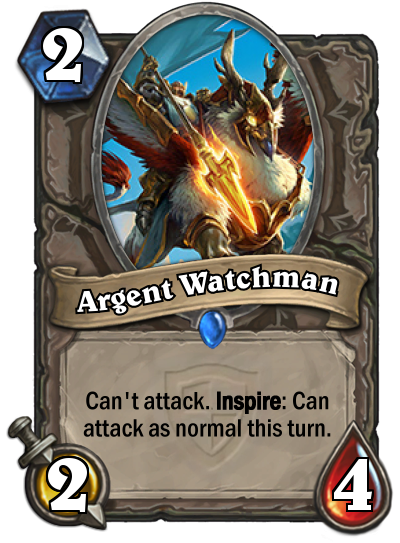 Now here's an interesting minion that plays around with the new Inspire mechanic. Argent Watchman is essentially a 2-mana statue, much like Ancient Watcher. However, it gets to move the moment a Hero Power is used.

This will fit in nicely with Handlock decks, since those Warlock players will be looking to stack their hand with their Hero Power anyway. They won't even feel the drawback. In fact, this is arguably a better early play than the 3-mana Imp Gang Boss and doesn't have to worry about any pesky Silence spells.

The other class that could take advantage of this minion is the Druid, since some of his spells work so well with his Hero Power. Using Claw or Bite in conjunction with the Druid's Hero Power should give the Argent Watchman enough of a chance to strike. Worst case scenario, he'll go nicely with Defender of Argus or Sunfury Protector. 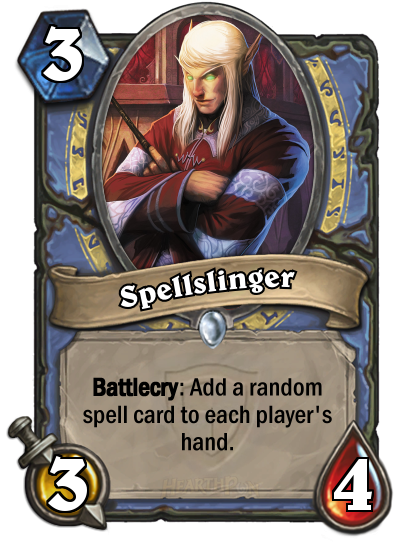 Looks like 3-cost 3/4 minions are getting awfully popular. Here's one that's exclusive to the Mage, but one that might have a serious drawback. Its Battlecry will grant both players a spell, but let's analyze that effect a little closer. Notice that the wording says a random spell card, but does not specify that it has to come from that particular class. In other words, Mages shouldn't expect to necessarily get Mage spells out of this guy.

In fact, with randomization being what it is, there's a decent chance that Mage players will strike out completely with Spellslinger and end up with something useless like Deadly Poison or Sense Demons. That's without even mentioning what the opponent could get. Imagine putting a Mind Control in the opponent's hand.

Spellslinger's stats are tempting, but that unpredictable effect means he needs to go back to wizard school. 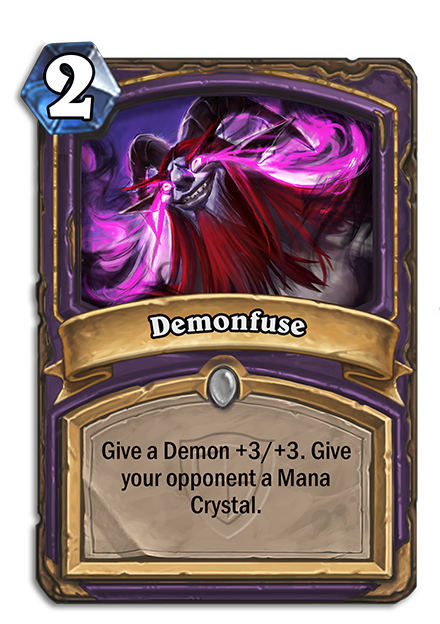 Demonfuse - Give a Demon +3/+3. Give your opponent a Mana Crystal

Here's the Warlock's equivalent of the Warrior's Rampage spell, which can give any Demon an extra three attack and health. It's a low-cost spell and it'll be very tempting to use it on Turn 2 to essentially put Voidwalker and Flame Imp on steroids.

Try and resist that temptation, because this may be better served in the late stages of a game, where the Mana Crystal drawback can't be used against you. This spell can make complete nightmares out of demons like Void Terror or Floating Watcher. It may even be best saved for Mal'Ganis, who could become a real pain for opponents, since they'd have to deal with him before going after the Warlock. Demonfuse is a fantastic spell and one that can make just about any Demon a formidable force. And if it does end up being used for late-stage games, it's another powerful addition to Handlock decks.

There's still plenty more to go with the reveals for Hearthstone's Grand Tournament expansion. Shacknews will continue its ongoing analysis of these new cards as they're released, so stay tuned for more in the coming weeks. In fact, the weekend was very active, in terms of card reveals, so join us again tomorrow for another round of card reveals.