Yesterday was an exciting day for Hearthstone players, with Blizzard announcing the game's next big expansion. The Grand Tournament will introduce some new mechanics to the game, such as the Inspire mechanic that places a greater importance on the use of Hero Powers. It's also set to introduce 132 new cards.

As one might expect, these new cards will create some interesting synergy possibilities with existing cards. So today, Shacknews is breaking down the first batch of cards revealed during yesterday's stream. There are plenty more to come, so keep visiting for additional analysis. But in the meantime, let's examine the first of many new cards to come. 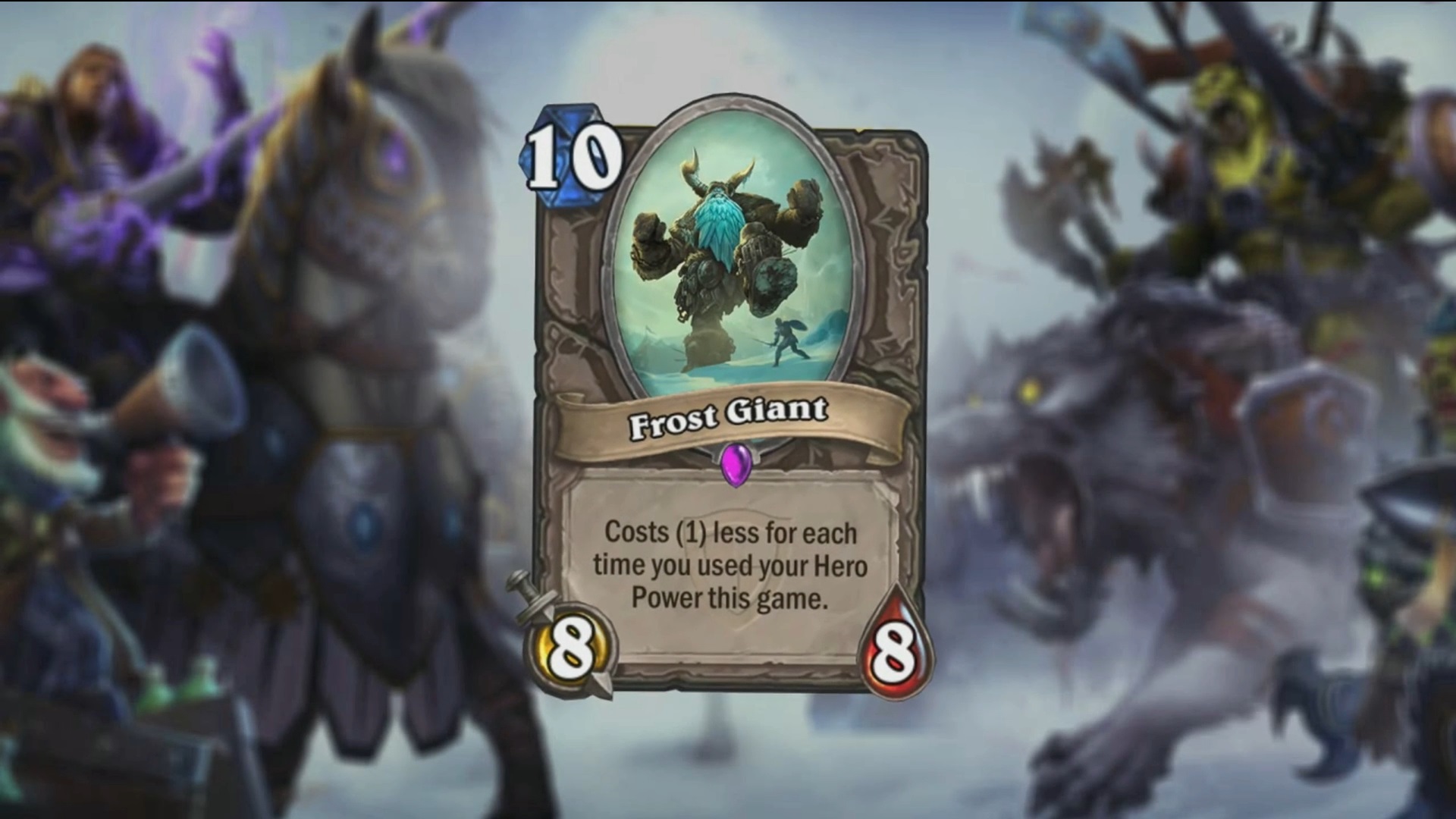 This is one of many new cards that will be placing a greater importance on the use of Hero Powers. Just about any class can take advantage of this monster and certain classes will be able to abuse him greatly.

The synergy possibilities that immediately come to mind are the Warrior, who can armor up throughout the game before laying down a Frost Giant and enhancing it with Charge for a quick 10 health bash. For additional damage, this guy can be paired with Inner Rage or Cruel Taskmaster to deliver even more hurt.

That's just a start, as pretty much any character can make great use of Frost Giant, especially when paired up with powerful neutral cards like Defender of Argus or Sunfury Protector. 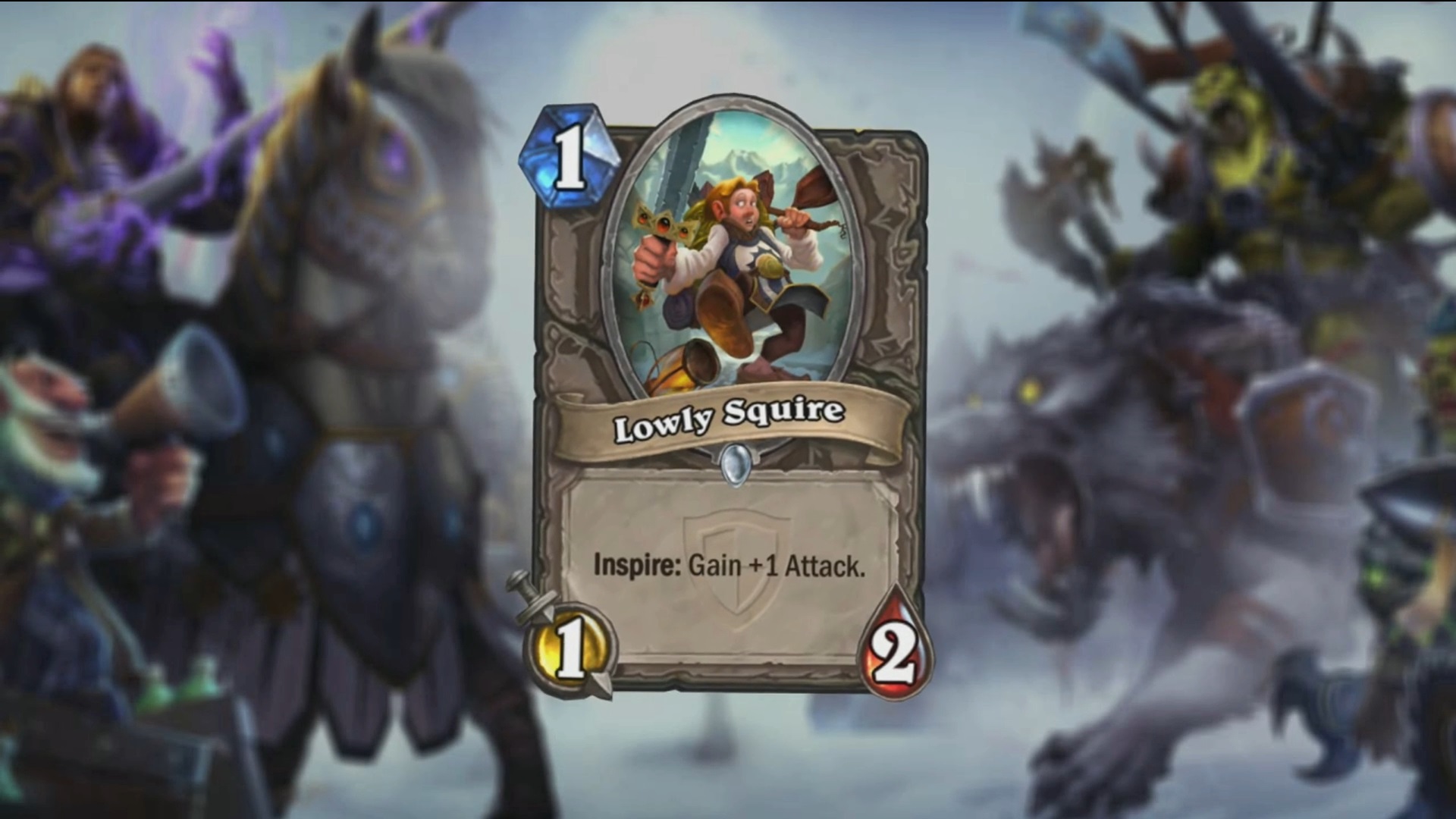 This is the first of many cards to utilize the new Inspire mechanic, which causes an effect whenever a Hero Power is used. As a 1-cost minion, Lowly Squire will most often be used as a potential opening gambit, with players powering him up on the second turn. Lowly Squire is decent in this function, not offering the drawback of Zombie Chow, but also not starting out with the potential attack power of Cogmaster.

Lowly Squire may be potentially better as a late game play, particularly when paired with Maiden of the Lake (which we'll get to later). That's an extreme circumstance, though. Lowly Squire does indeed live up to his name in this instance. While the Inspire mechanic is fine, he doesn't have the power to replace a standby like Cogmaster. 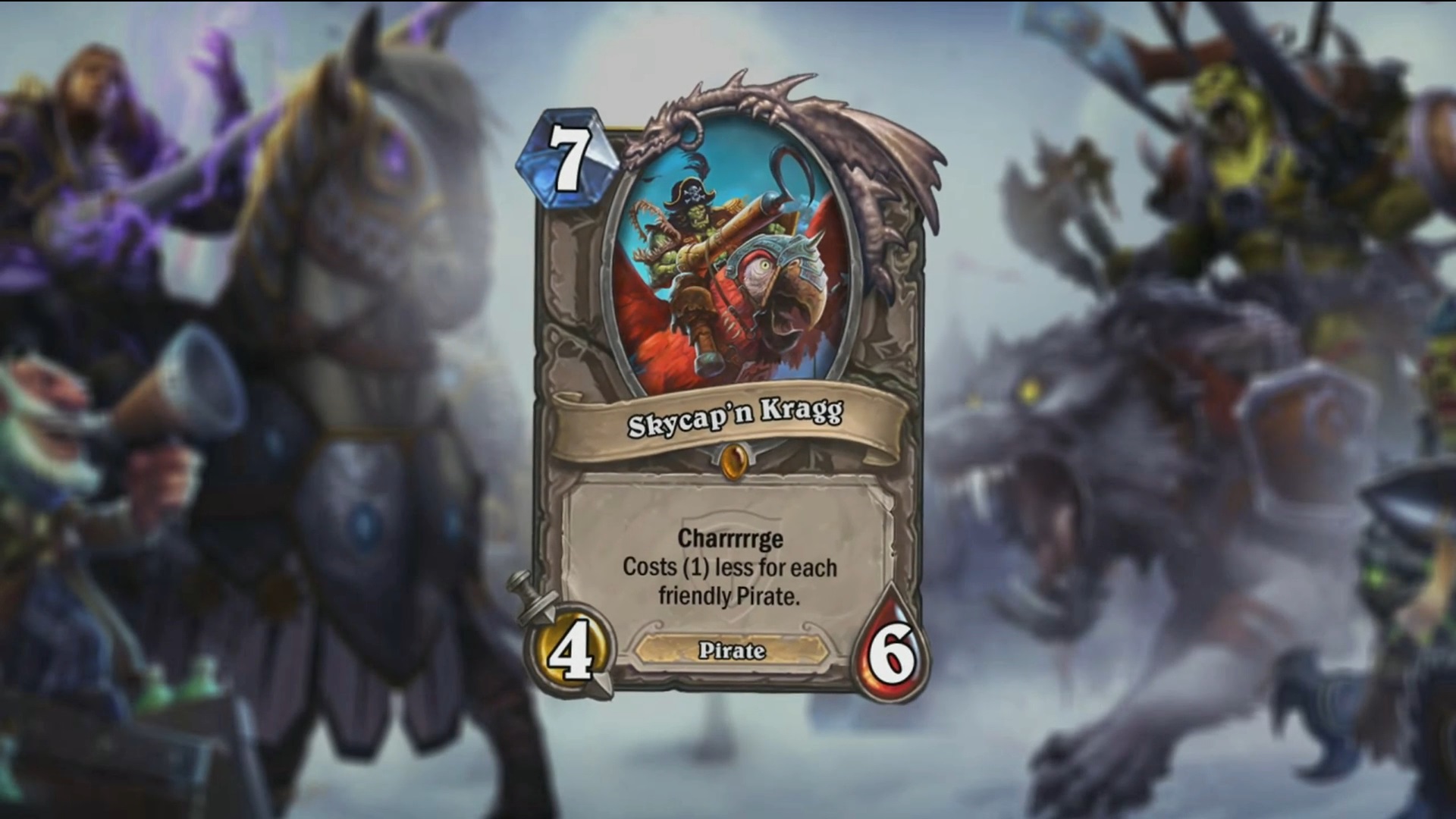 Blizzard certainly likes its pirates. This is the latest to join the scurvy dogs. But unfortunately, a Pirate-themed deck just is not feasible and Skycap'n Kragg does not help matters. His ability is entirely dependent on the current slate of pirate minions, who aren't really any good to begin with. Keeping pirates alive is a tall task and if players can't make that happen, they're stuck with a very expensive 4/6 minion.

Obviously, Skycap'n plays well with other Pirates, but he doesn't do well beyond that. On the surface, he seems fine for a Divine Spirit/Inner Fire combo, but considering that a Priest can use that with a Stormwind Knight for less mana, it just isn't worth it.

Sorry, me hearties. The Pirate-themed decks aren't ready to set sail just yet. 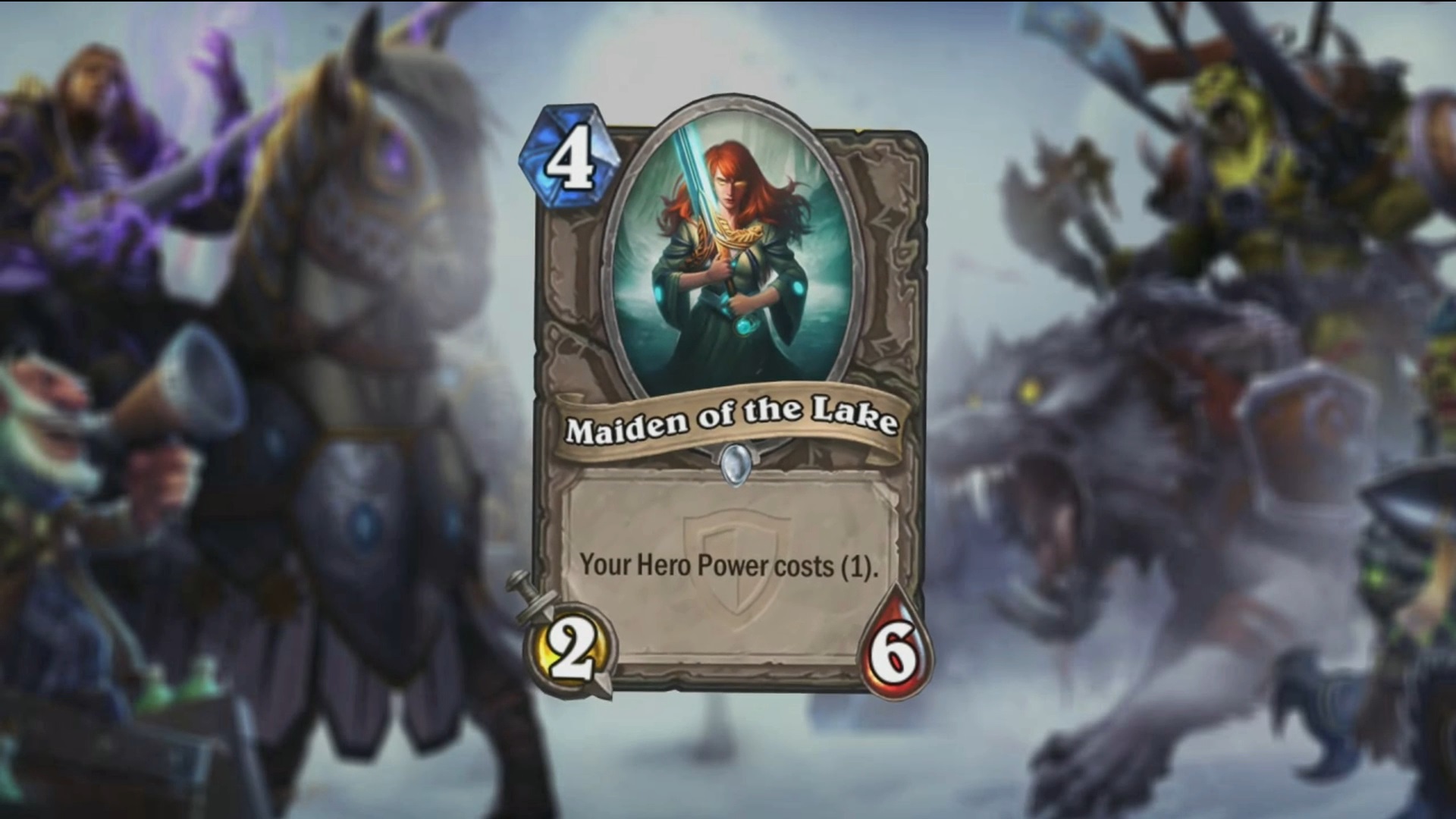 Maiden of the Lake's ability is an intriguing one. Mages and Hunters can go on offense for less and Warlocks only need 1 mana to draw a new card. There's certainly something enticing about that.

Among the classes that can make best use of Maiden of the Lake are the Priest, who could definitely use the cheaper mana cost to do some quick healing. In late games, using subsequent turns for Prophet Velen can make that extra mana all the more valuable. She'll also go beautifully alongside many of the other Inspire minions that are expected to be introduced with this new expansion.

But let's face it, the Maiden of the Lake is mainly built for the Mage. That's because it can be used alongside... 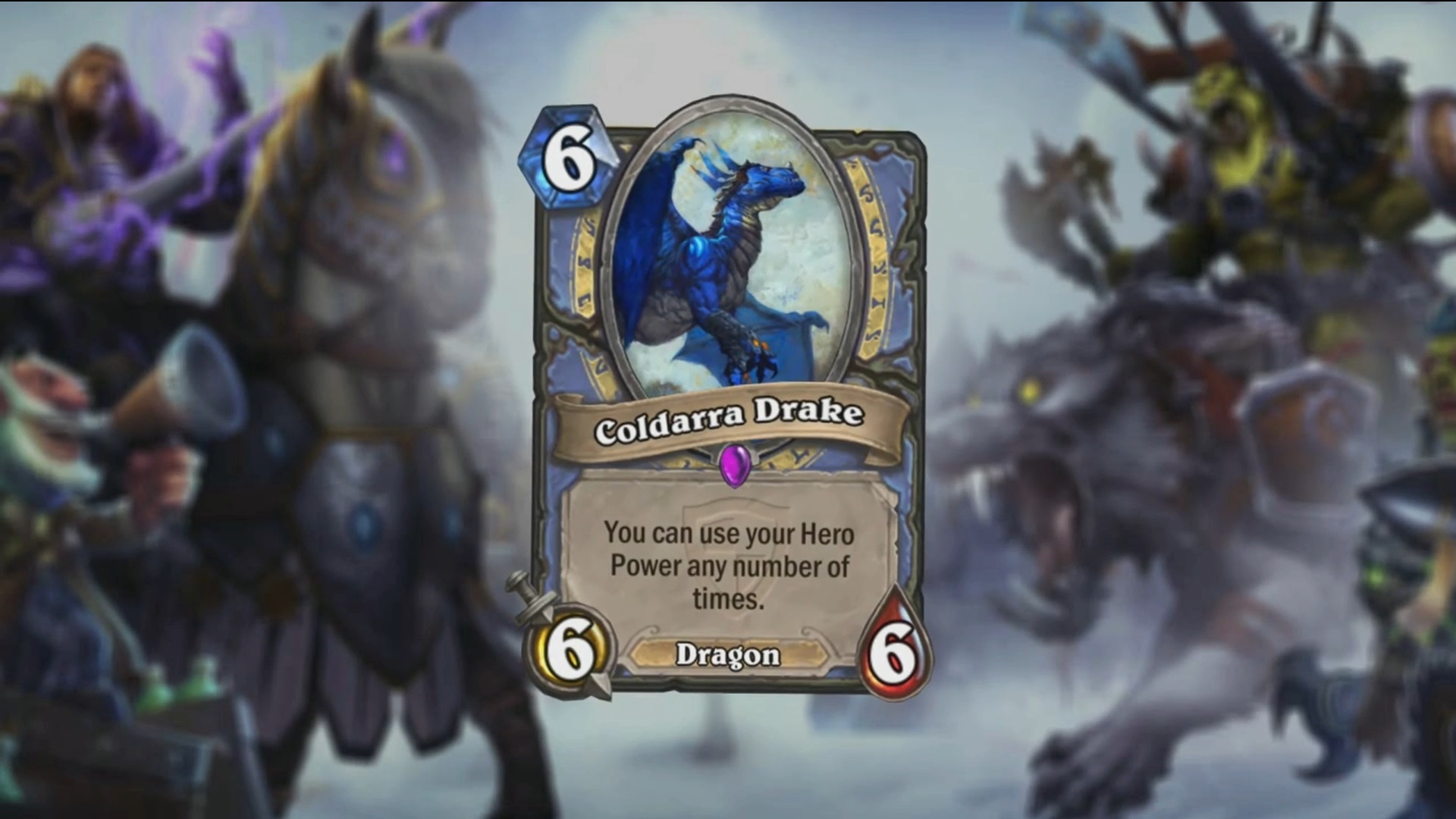 Off the bat, the Mage-exclusive Coldarra Drake is powerful, thanks to its 6/6 stats. Its ability is what makes it most interesting, though. This allows the mage to start flinging Hero Power fireballs at a rapid pace, potentially taking out lower-level minions or polishing off ones on the brink of defeat.

Now let's pair Coldarra Drake with Maiden of the Lake. With both of these out, a Turn 10 play can consist solely of Hero Powers, hitting for 1 damage each. That's good enough to match the damage inflicted by a Pyroblast. Now combine that play with a couple of Frost Giants to really make your opponent sweat.

The trick, however, is keeping both Coldarra Drake and Maiden of the Lake alive long enough to pull this off. That definitely isn't easy, even when aided by Emperor Thaurissan. On the surface, the Coldarra Drake/Maiden of the Lake combo look potent, but a lot of things have to swing the right way for it to work. It's definitely a risk. But as mentioned before, a 6-mana 6/6 is nothing to sneeze at. 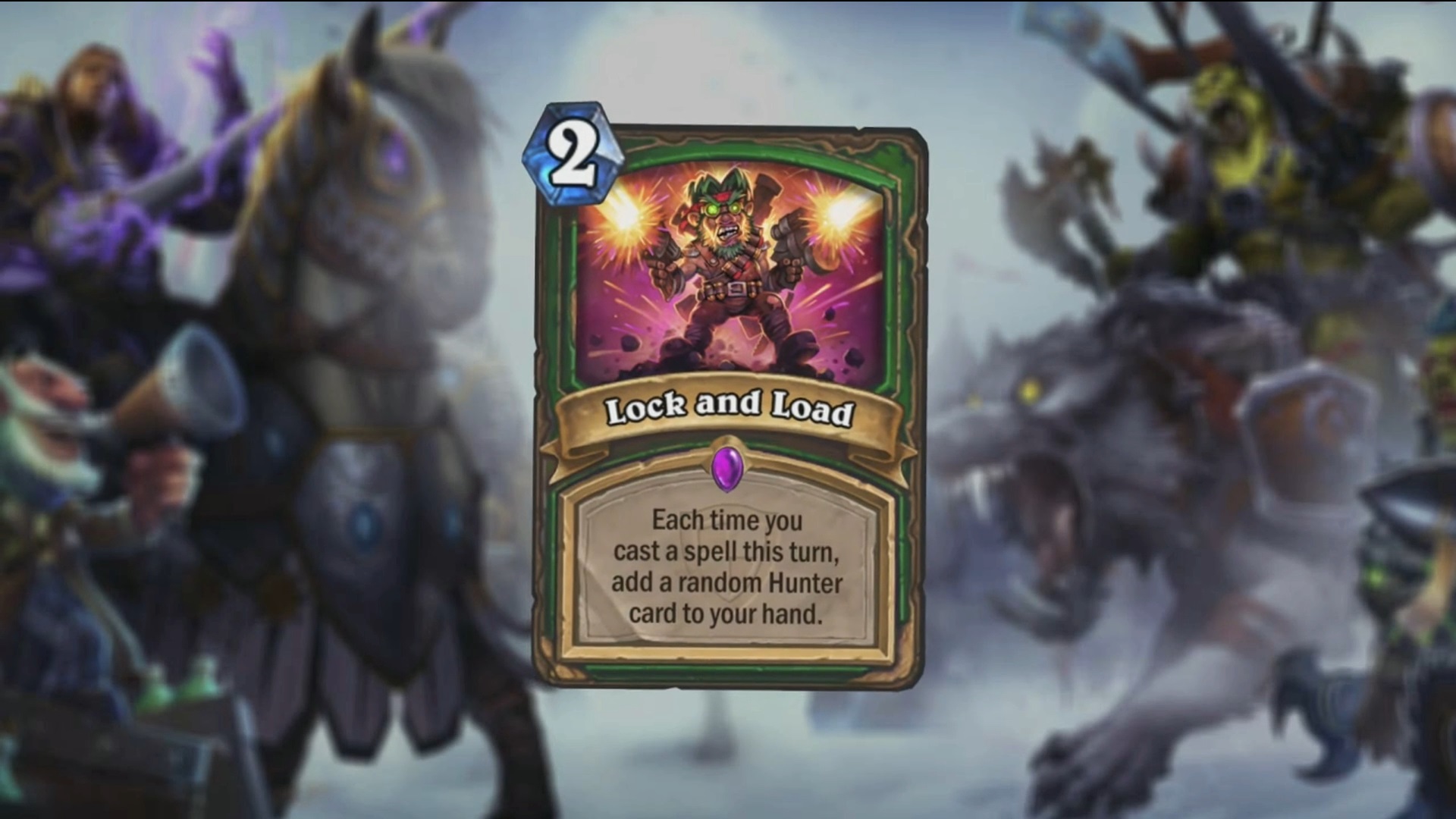 (2) Lock and Load - Each time you cast a spell this turn, add a random Hunter card to your hand

"Because Hunter just wasn't overpowered enough," is a sentence this writer has seemingly typed several times over months of Hearthstone coverage. The Hunter-exclusive Lock and Load is only 2 mana, but its effect means it's an ideal late game play when a player's hand may be running thin.

It's largely helped by the fact that so many of the Hunter's spells are so insanely good. Lock and Load can be paired up with the 0-cost Hunter's Mark, the 1-mana Arcane Shot, literally any number of the Hunter's powerful Secrets, or the always-powerful Unleash the Hounds. It's going to be very easy to replenish a Hunter's hand with Lock and Load, especially if any of the character's other spells have their cost cut by Emperor Thaurissan beforehand. 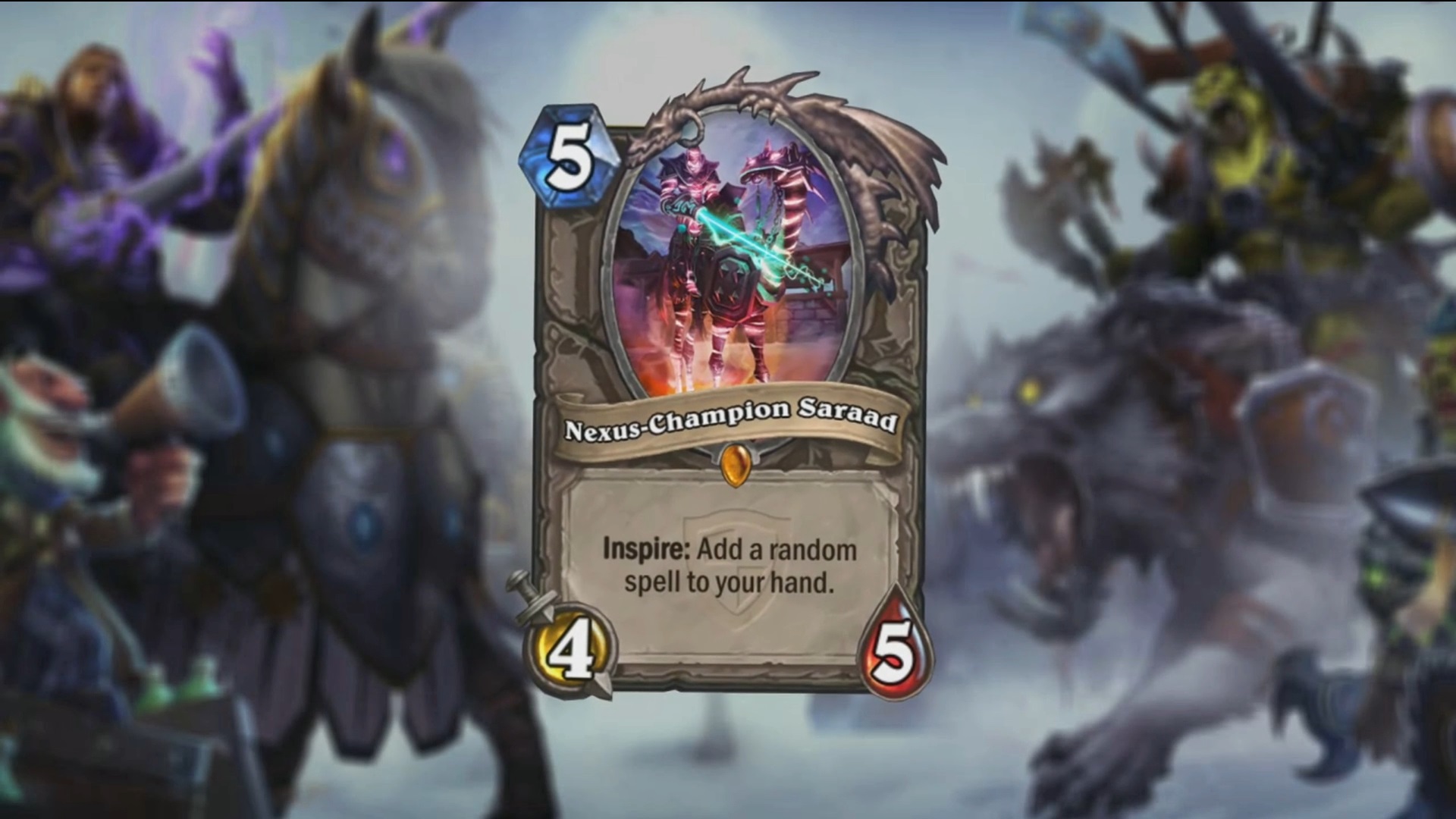 As our own Steve Watts eloquently put it, Nexus-Champion Saraad is essentially mini-Nefarian. Only instead of creating a spell from the opposing class, Saraad will generate a spell from any class. That's puts a player's fate in the hands of randomness, even moreso than usual. Using a Hero Power can create something as effective as Mind Control or something as unhelpful as Upgrade.

This would seemingly work well with the aforementioned Coldarra Drake/Maiden of the Lake combo for the Mage. But remember, a lot of things have to swing the right way for this to work. Opponents are not going to sit idly by and allow this setup to happen, so don't hold your breath on any of these minions surviving long enough to create ten spells in a single turn. If they do, congratulations!

Paladins or Rogues may ultimately be a better fit for Saraad, especially if they have cards to protect it, like Argent Protector or Conceal. If any of your mechs leave behind a Finicky Cloakfield Spare Part, now would be the ideal time to use it. Saraad is definitely a minion that players will want kept alive.

That's all for now, but there are definitely more breakdowns on the way. Come back on Friday for another handful of breakdowns for the upcoming Grand Tournament cards.