Disney Interactive and Avalanche Software has already gone into full detail on a number of Disney Infnity's upcoming 3.0 Play Sets. Those include ones based on Star Wars (the prequels and the original trilogy) and other, newer Disney properties. However, one of Infinity's most defining features remains the Toy Box mode that allows players to put all of their pieces together to construct their own adventures.

The Toy Box is slated to receive a couple of expansions with the jump to 3.0. It will get a new hub world with familiar locations (Flynn's Arcade from Tron and the iconic El Capitan Theater) to download Toy Boxes and jump into online matchmaking. It's also getting some new activities, including a new expansion game called Toy Box Speedway. Shacknews watched as attendees took to the Arendelle Racing Rink from Frozen with some of Disney Infinity 3.0's newer characters like Sadness from Inside Out and Quorra from Tron: Legacy. When it came time for this writer to take to the track, the Disney worker offered me a choice of any figure I wanted, assuring me that all characters were balanced exactly the same. There was only one answer. 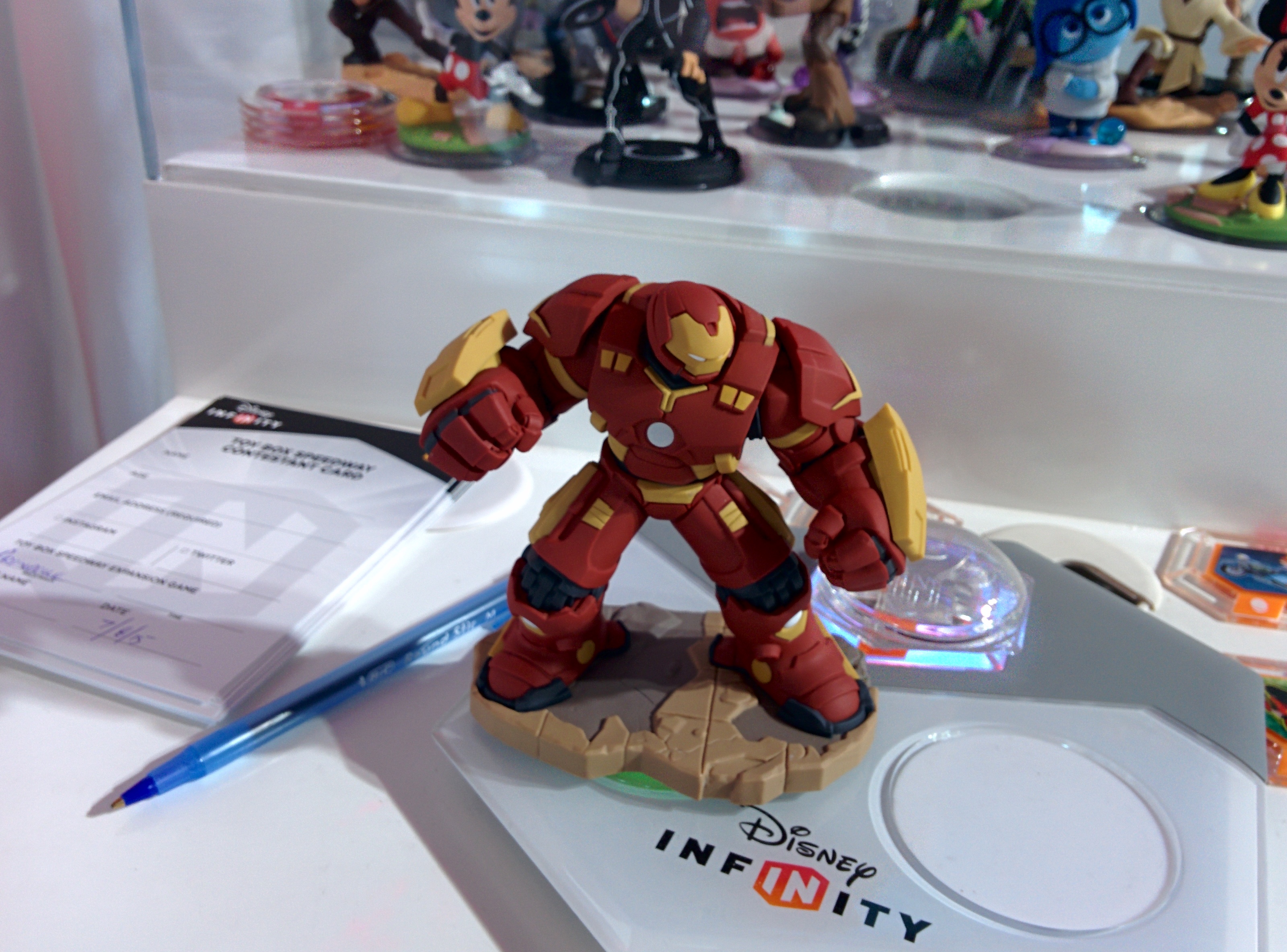 Yes, it was time to take to the track with Hulkbuster Iron Man, one of the newest figures on display for Disney Infinity 3.0. With the massive suit of armor from Marvel's Avengers: Age of Ultron at my side, the race began. The first thing I noticed was that there wasn't a particularly strong sense of speed. Rather, the cars looked to be moving at a more methodical pace than most racers I've grown accustomed to.

However, speed can be picked up over the course of the race, as players can hit the accelerator and the brake at turns to perform power slides, which raises a player's turbo level. Flicking up on the right analog stick will activate turbo boosts to help catch up to other racers, like Elsa and Sully from Monsters Inc.. There are also power-ups littered throughout the field, such as homing missiles, to help slow other characters down. The AI here was particularly brutal and didn't hesitate to use those power-ups themselves, as I could only watch Anna from Frozen cruelly fire away with her own barrage of missiles. Despite taking advantage of some well-placed shortcuts, Hulkbuster Iron Man was only able to muster a third-place finish.

After a sluggish start, the Toy Box Speedway handled rather well and grasped many of the racing genre's fundamentals. This is hardly surprising, as Disney Interactive and Avalanche Software recruited the team at Sumo Digital to bring their expertise from Sonic & All-Stars Racing Transformed to the project. The studio's effort shows through the course design, the balanced racing, and the power-up warfare that quickly ensued.

For those looking to get a closer look at Disney Infinity 3.0, Disney Interactive has fully playable demo stations at San Diego Comic-Con all weekend on J Street near PETCO Park. Attendees will be able to check out the game, art displays, a special Toy Box setup that will allow people to take pictures with virtual characters, and see the Hulkbuster Iron Man and Ultron figures for the first time. The event is open to the public and a Comic-Con badge is not required. Look for Disney Infinity 3.0 to kick off on August 30.