Opinion: Could Sprked be the answer to the paid mods issue?

I recently wrote an opinion piece in which I discussed Valve’s attempts to introduce paid mods to Steam and outlined potential solutions for making paid mods work. The piece only covered a few scenarios, but it caught the eye of Andrew Moussa, the CEO and one of the co-founders of Sprked, a new online service that seeks to implement paid mods in a way that will make both modders and players happy. It’s a tall order, as Valve learned, but judging by the way in which Sprked allows modders to make money off of their creations, it could theoretically work if implemented correctly.

Appealing to the Masses

If you’ve ever heard of or used the online service Patreon, Sprked functions in a very similar manner while focusing specifically on PC mods. Modders who start a campaign on Sprked don’t promote an individual mod (although they can), but are instead are encouraged to show off the full breadth of their modding capabilities. While a Sprked modder’s mods are free, fans of the modder’s work can “subscribe” to their Sprked campaign at various monthly payment tiers (determined by the modder) with each tier granting specific perks much like a Kickstarter campaign. For example, a modder might have a campaign with a $1 per month tier that grants subscribers a personal thank you message, a $5 per month tier that adds their name into a mod’s credits, a $10 per month tier that grants early access to an upcoming mod, and so forth.

This system has a much better chance of working than Valve’s system because it incentivizes users to subscribe to campaigns without forcing them to. You can still play a mod featured in a campaign for free, but supporting the mod’s creator allows them to continue making them while unlocking some cool perks. Since modders on Sprked receive 95% of the funds generated through their campaigns, you can also rest assured that your money is primarily benefiting the modder and not some third-party company.

The campaign structure used in Sprked can be tweaked to fit an individual modder’s unique parameters. For example, if a modder would rather ask for donations on a per-mod or per-game basis instead of per-month, they can do so. Modders also have full control over the kinds of rewards they offer. Physical rewards such as personalized post cards, social rewards such as access to exclusive livestreams or Google Hangouts, in-game rewards such as skins or items, these are just some of the many different rewards modders can use to entice interested fans into subscribing. 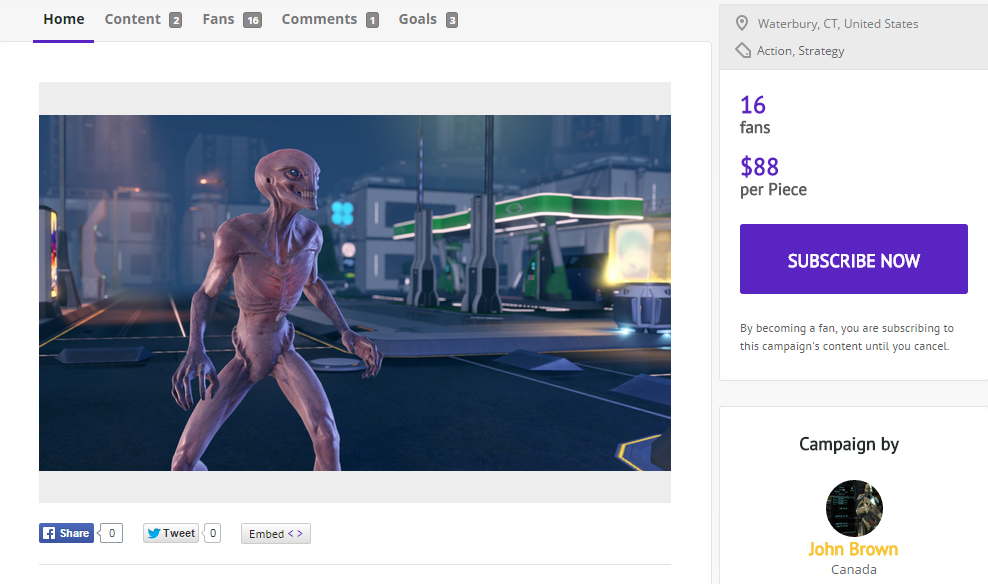 As great as the idea behind Sprked sounds, it isn’t without its challenges. The simple fact that it’s a service associated with the hot-button issue of paid mods means there will likely always be a fair number of people thumbing their noses at it. Plus, there’s a lot of room for abuse on both sides of the service’s userbase. Devious users could “troll” modders by making large fraudulent payments, either with a stolen credit card or by disputing the charge with their bank. Since modders are directly responsible for providing all of their campaign’s perks, it would be very easy for a modder to promise a perk, hit a rough financial patch, and then be unable to fulfill those promises. According to the Sprked terms of use, modders are legally bound to provide perks as promised but it’s up to individual modders and their fans to figure out a solution if the modder can’t deliver (refunds, alternate perks, etc.)

The terms of use are also careful to clarify that Sprked isn’t responsible if a modder can’t provide the perks they promised. This means there is more risk involved when subscribing to a modder’s campaign, at least when compared to Valve’s more straightforward system of charging a flat amount for access to a mod, since if the modder and fan can’t reach a resolution, Sprked is under no obligation to step in. In short, while the Sprked campaign system offers freedom and flexibility to both modders and fans, the folks behind Sprked are relying on a baseline level of trust and accountability, which - as Kickstarter has proven - isn’t the most stable foundation.

A Bright, If Uncertain Future 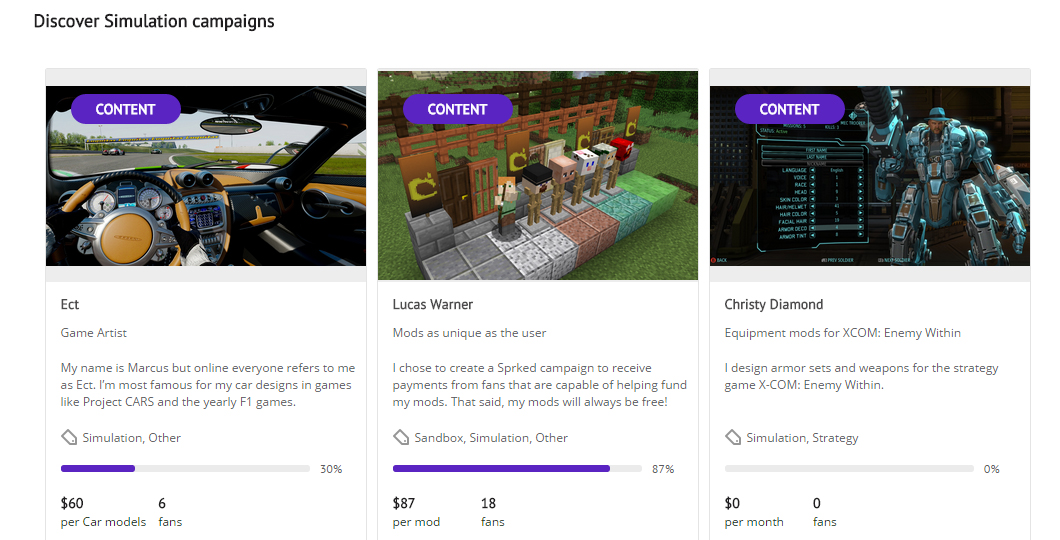 A quick perusal of the current Sprked website shows that the service still has a long way before it can go mainstream. While all of the service’s campaigns are grouped together into broad categories like “Adventure”, “RPG”, and “Sandbox”, there is currently no easy way to find specific modders or games, aside from browsing through all of the categories. A number of mods also appear to be mis-categorized, making it even more difficult to find what you want. Many of the campaigns also contain low-quality images and grammatical errors in their description text, which doesn't exactly encourage investment. These may all be minor, easily-fixable issues, but considering the fact that Sprked is trying to re-introduce a concept that Valve, the undisputed granddaddy of PC gaming, failed to successfully launch, the service definitely has its work cut out.

Even with these issues, Sprked offers a much more user-friendly system than what Valve introduced. When used as intended, the Sprked system benefits all parties without forcing any restrictions, financial or otherwise, on either the modders or the potential subscribers. It will be interesting to see how much Sprked catches on as it gains more media attention (especially if Valve ever tries to re-introduce a paid mod system) but for now, the success or failure of the service rests firmly on the shoulders of Andrew Moussa and the rest of the Sprked team.