Upon first glimpse, there's a lot to take in from Horizon: Zero Dawn, the latest effort from Killzone creator Guerrilla Games. There's a huntress with a bow and arrow in a wide-open, forest-like world, hunting down wild beasts that are completely mechanical, yet behave like wild animals. Where did such a concept even come from? Logically, how does such a concept even hold water? Shacknews recently had the opportunity to check out a closed-theater demo for Horizon: Zero Dawn to learn more details about this upcoming action RPG.

Horizon: Zero Dawn follows a main heroine by the name of Aloy (pronounced A-loy), a master craftsman and hunter living in the distant future. In fact, the future is so distant that the developers are referring to the time period as "post-post-apocalypse," as it takes place over a thousand years after the fall of civilization. Part of the story in Horizon will see Aloy visiting new, unexplored areas, never before seen by human eyes. A part of the main narrative will surround the mystery of who or what built these areas, given how much time has passed since civilization has fallen. 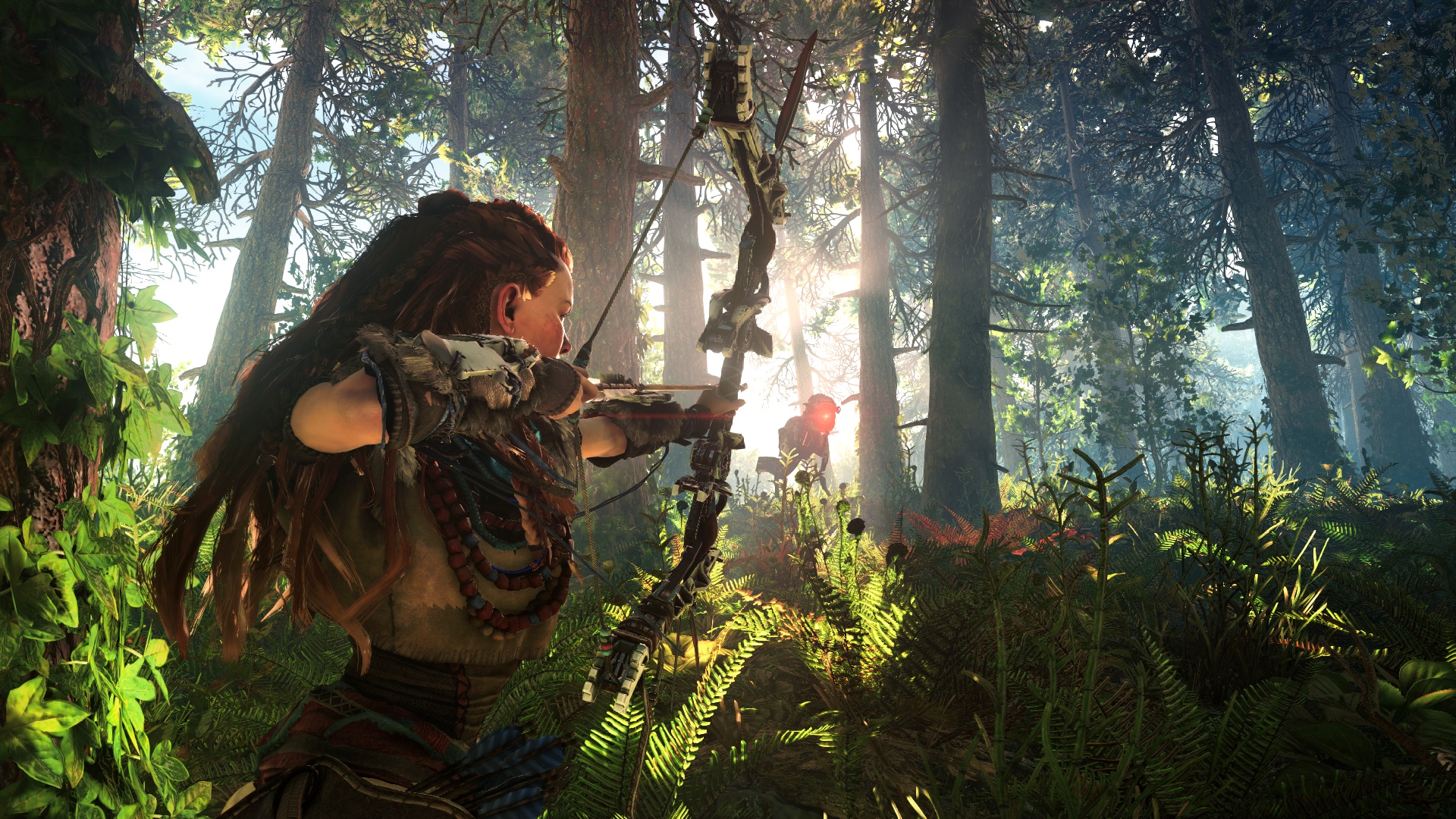 There's another major mystery centered around Horizon and that involves part of its very premise. As the developers went on a tour of the vast open world, Aloy encountered numerous mechanical beasts. She hides from them by hiding in the grass to ensure they can't sense her before she moves in for a stealth kill. She later finds a group of Grazers, which are essentially deer-like machines. When they discover Aloy, they begin stampeding, knocking over several trees to help demonstrate the destructible parts of the environment. A few Grazers instinctively direct the herd to safety. These are totally mechanical constructs, yet they're exhibiting completely animalistic behavior. Guerrilla notes that there's a reason for that, but the mystery behind their existence, design, and behavior is buried in the game's story.

Aloy will have a full weapon wheel to work with throughout Horizon. While her bow is her most trusted weapon, she'll also have a few other tools, such as the Rope Caster. This weapon shoots tripwire explosives onto the ground, for whenever players would like to lure in unsuspecting Grazers or other beasts. Aloy can also exercise her craftsmanship skills to design different arrow types or other tools.

As the crafting element implies, Horizon: Zero Dawn will be heavily loot-driven. Each creature will be made of numerous mechanical parts, all of which can be harvested for trade, crafting, or currency. Raiding any mechanical corpses will show which items they're carrying, as well as the rarity level of each item. While large cities will include merchants and the like, players may opt to keep the machine parts for themselves, since all of Horizon's weapons are built with machine parts, even Aloy's bow.

Aloy will need to build some truly proficient weaponry to take on some of Horizon's bigger foes. The Thunderjaw, the massive beetle-like creature that was shown during the E3 2015 trailer, is a towering beast that's 80 feet long and 33 feet wide. Guerrilla is putting a lot into enemies of this magnitude, with the Thunderjaw boasting over 550 polygons, 271 different animations (70 of which are hit animations) and 57 visual effects. The developer hopes for fights to be varied, as the Thunderjaw will also have 93 different destructible plates of armor.

This is where the RPG element comes into play. RPG-like damage values will be displayed after each successful hit, with players having to take note of any kind of resistance. In this case, the Thunderjaw's armor is protecting it. But upon removing any of the protective plates and striking down at the "muscles," the creature will suffer threefold damage. Striking at its power core will be good for 10x damage. But even knowing the Thunderjaw's weakness, Guerrilla does not recommend starting the game by taking on an enemy of its size. With a laser, gatling gun, and tail swipe attack, the Thunderjaw should not be messed with until Aloy reaches level 12.

There are plenty of questions left to ask about Horizon: Zero Dawn and its story, as well as bigger creatures to check out. Look to see more from this game in the coming months. Horizon: Zero Dawn is expected to release on PlayStation 4 in 2016.