Much of the discussion surrounding Disney Infinity 3.0's Star Wars Play Sets has been about the prequel era of the series. Disney Interactive and Avalanche Software has already outlined their plan to explore the Clone Wars. Now it's time to look into the classic trilogy, as discussion turns towards the upcoming "Rise Against the Empire" Play Set.

Rise Against the Empire will be built by Avalanche Software, collaborating with Studio Gobo, who previously worked on Disney Infinity's Guardians of the Galaxy Play Set. The game will feature five playable characters from Episodes IV through VI: Luke Skywalker, Princess Leia, Han Solo, Chewbacca, and Darth Vader. 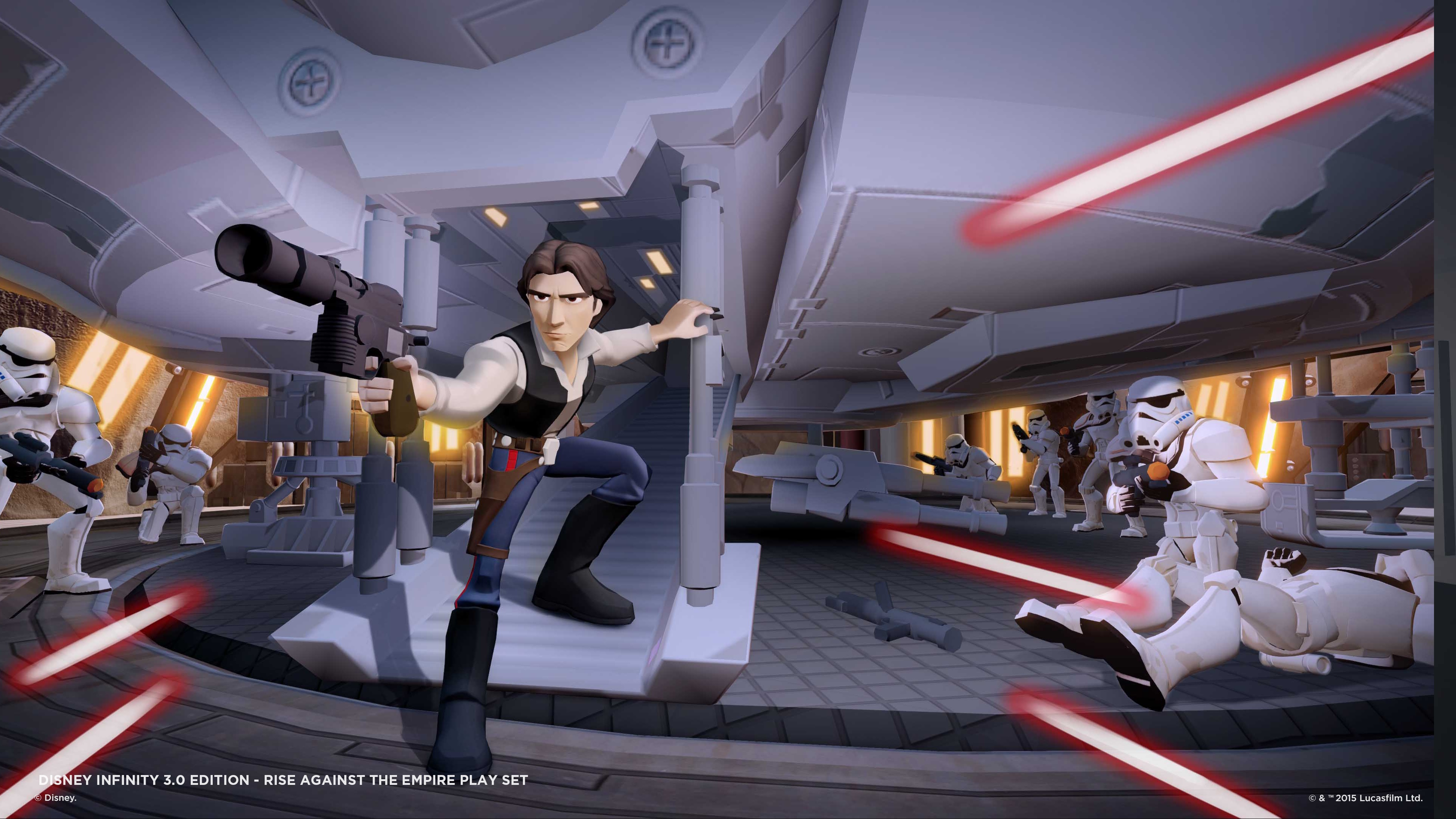 "We partnered with Studio Gobo on this Play Set to help enhance racing and our flight mechanics," game director Mike Thompson explained during the Play Set's presentation. "Our goal is to deliver an experience for families to play together. In fact, all of the dads at Gobo and Avalanche are excited to play this with their kids. We really want everyone to feel like they're a kid again when they pick up the controller."

Players will explore familiar scenes from the original Star Wars trilogy, including Tatooine, the Death Star, Hoth, the second Death Star, and Endor. While the idea is to create a world reminiscent of the films, the main objective that Avalanche and Gobo are looking to achieve is the overall Disney Infinity 3.0 vision of creating the "Everything is a toy" idea. To that end, many of the set pieces in each level will contain toy components to play with, like a Bantha, land speeder, or Skyhopper along Tatooine.

Each location will feature open-world gameplay, which will include side missions from characters like Jabba the Hutt. These side missions can involve exploring Tatooine aboard a Bantha, taking on an AT-AT aboard a snowspeeder on Hoth, or outracing an Imperial Stormtrooper on a speeder bike on Endor. While the 3D platforming of the previous Star Wars Play Set was on full display, right down to Ninja Theory assisting with the first Death Star stage, there was something else that grabbed Shacknews' attention. That was the space combat. 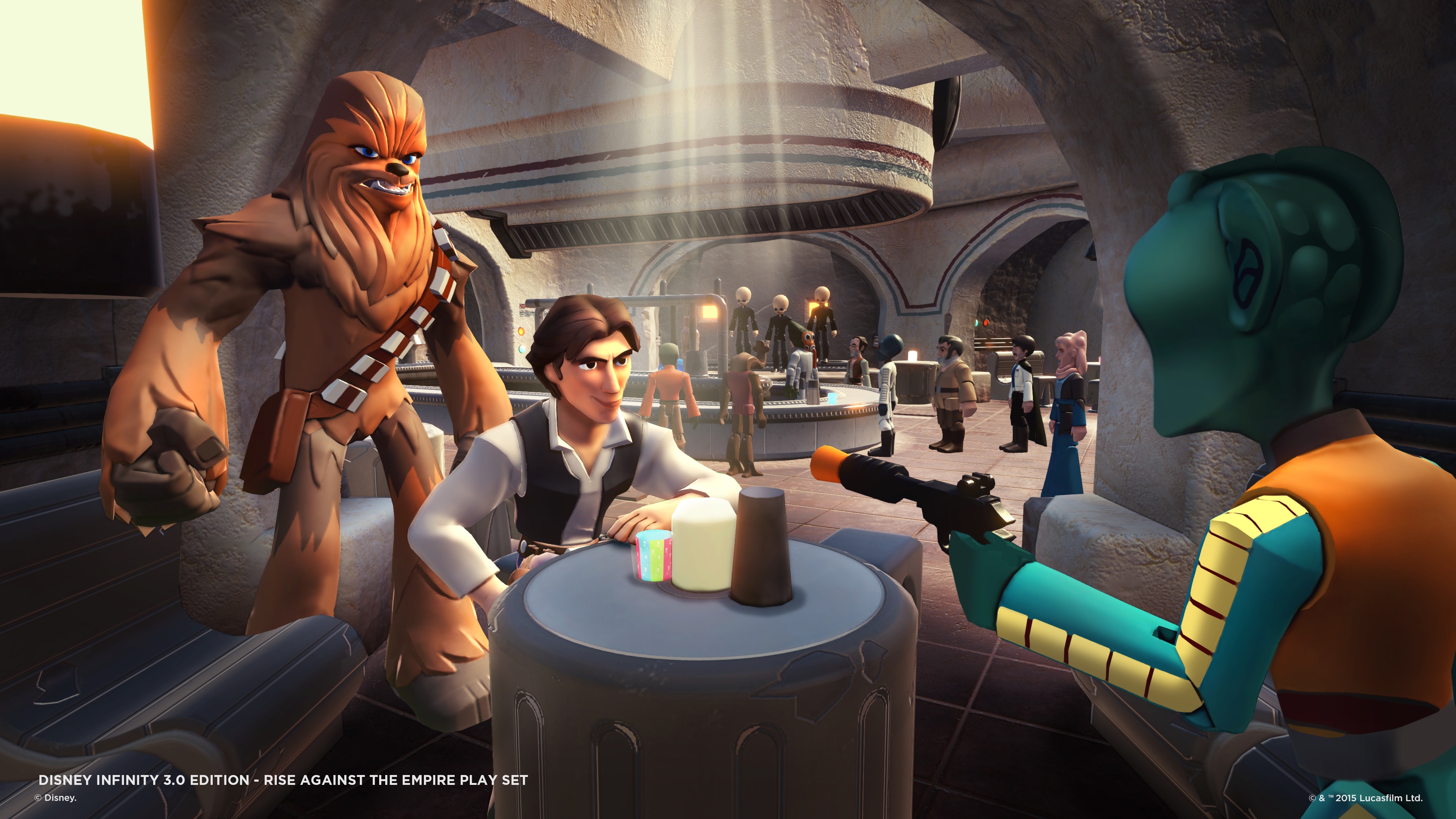 So once the presentation was over, I picked up a nearby controller to try out one of the more iconic trilogy scenes, the Death Star trench run from Episode IV. While this sequence did its best to re-create the tense atmosphere of the original movie scene, the visuals were immensely toy-like. While that took me out of the moment at times, the flight mechanics were smooth and the learning curve was friendly. To me, it came off incredibly kid-friendly, so while I wasn't personally overly taken by what I saw, I wouldn't hesitate to give a kid a shot at this sequence as a first step towards experiencing some of the movies' most iconic moments.

Rise Against the Empire and Twilight of the Republic will represent two of the Star Wars Play Sets set to hit Disney Infinity later this year. Disney Interactive is hinting at a third Star Wars Play Set based on the upcoming The Force Awakens film, but details on that set (much like the film) are being kept top secret. Look for more on the Episode VII Play Set closer to the flim's release.

The Rise Against the Empire Play Set will include Luke Skywalker and Princess Leia figures. Han Solo, Chewbacca, and Darth Vader will be sold separately. Look for these Play Sets and figures to release alongside Disney Infinity 3.0 on PC, PlayStation 4, Xbox One, Wii U, Xbox 360, PlayStation 3, iOS, and Android this fall.