Eidos Montreal has recently brought new life to some of their beloved franchises, like Hitman and Tomb Raider. However, Square Enix Montreal has become a beacon of how to best translate these series to mobile devices in an organic, engaging manner. Hitman GO was a prime example of this last year, but Agent 47 isn't done with the mobile realm just yet. Today, he hits iOS and Android with his sniper rifle in tow in Hitman: Sniper.

"Our mandate, as a studio, is to take all the cool brands, the Lara Crofts, the Deus Ex, and the Hitmans, and see how we can best bring them to the tablet and the mobile world," studio head Patrick Naud explained during a pre-E3 presentation. "Hitman: Sniper is basically a creative, leaderboard-driven sandbox. You have 11 targets, 25 to 30 guards, and you need to find the cleverest way to achieve your mission without being detected. If you know the Hitman brand, you know you get rewards for being subtle, for being smart, and for not being detected." 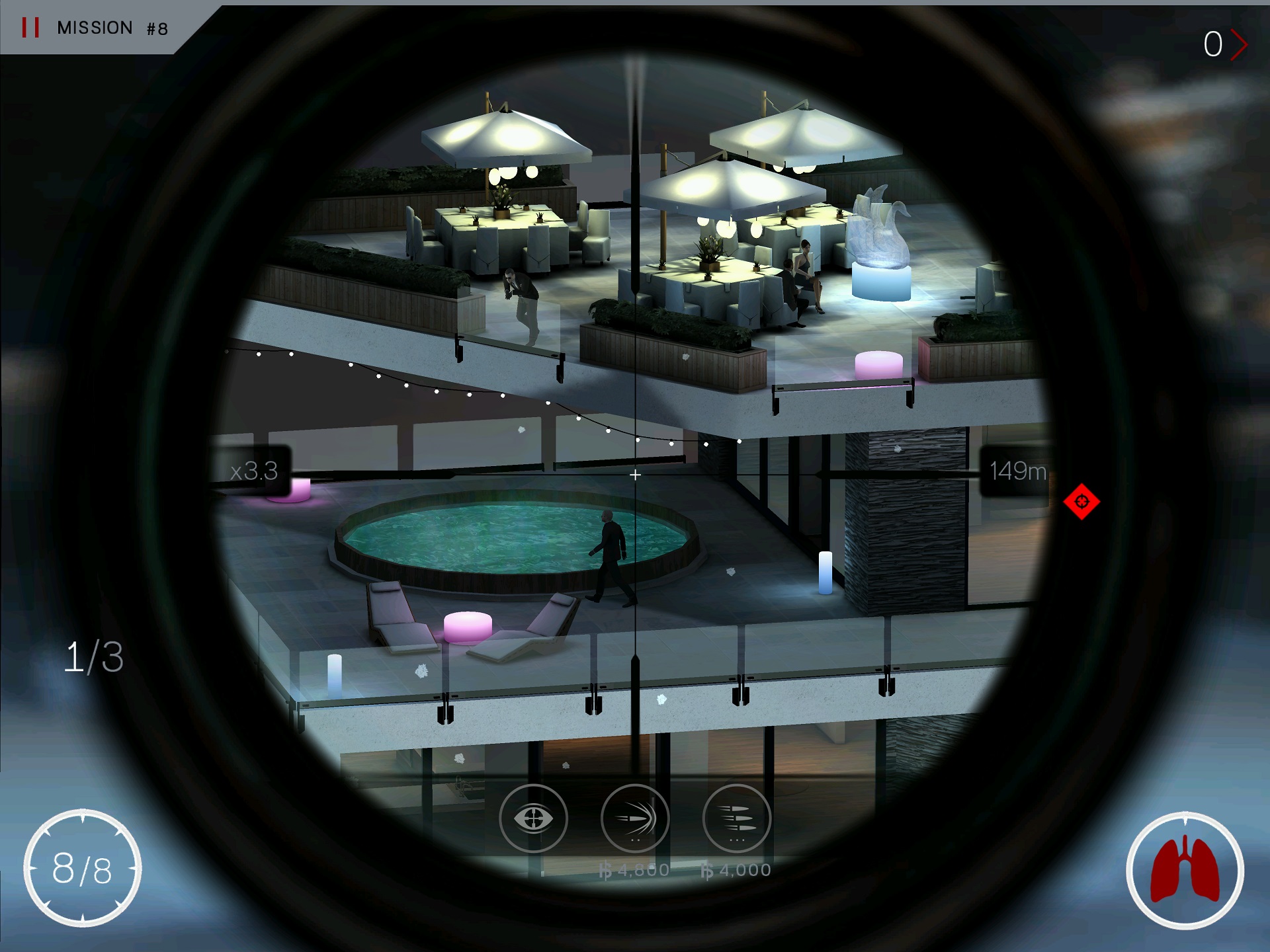 The hands-on demo took place along a beachfront mansion in Montenegro. The main objective was to take out a high-value target named Markus Krug. The entire stage is seen through Agent 47's sniper scope, with the target, civilians, and security detail all floating around. Targets could helpfully be highlighted with the use of the touch screen. All of these characters operate have specified patrols, so before taking aim, the object is to observe their movement patterns. Security, in particular, have patrol routes that they're required to take, which should offer an idea of where they'll go, though they might take an occasional break to enjoy the view or otherwise loaf around.

Anticipation is the name of the game in Hitman: Sniper, because the idea isn't just to take out all hostiles, but also to take them out in Agent 47's subtle manner. There will be instances where guards are wandering by a pool or leaning over a railing, at which point players can take their shot and the bodies will dispose of themselves. Bonuses will be awarded for corpses falling into hiding spots, as well as for combos and headshots. They're also awarded for using the environment to assist. For example, Agent 47 can shoot a nearby vehicle to set off its car alarm. As a suspicious guard went to investigate, I shot another guard leaning on a railing above him, sending him crashing down on top of the poor, helpless sap below.

The AI is fairly intelligent, as a stray shot or a noisy sniper bullet within range of another hostile will draw attention. If the security detail gets wise, they'll either spot Agent 47 or the target will be made aware of his presence, essentially making the mission a failure. Players must ensure that targets are either isolated or can be taken down in succession before taking their shot. There is no room for sloppiness. 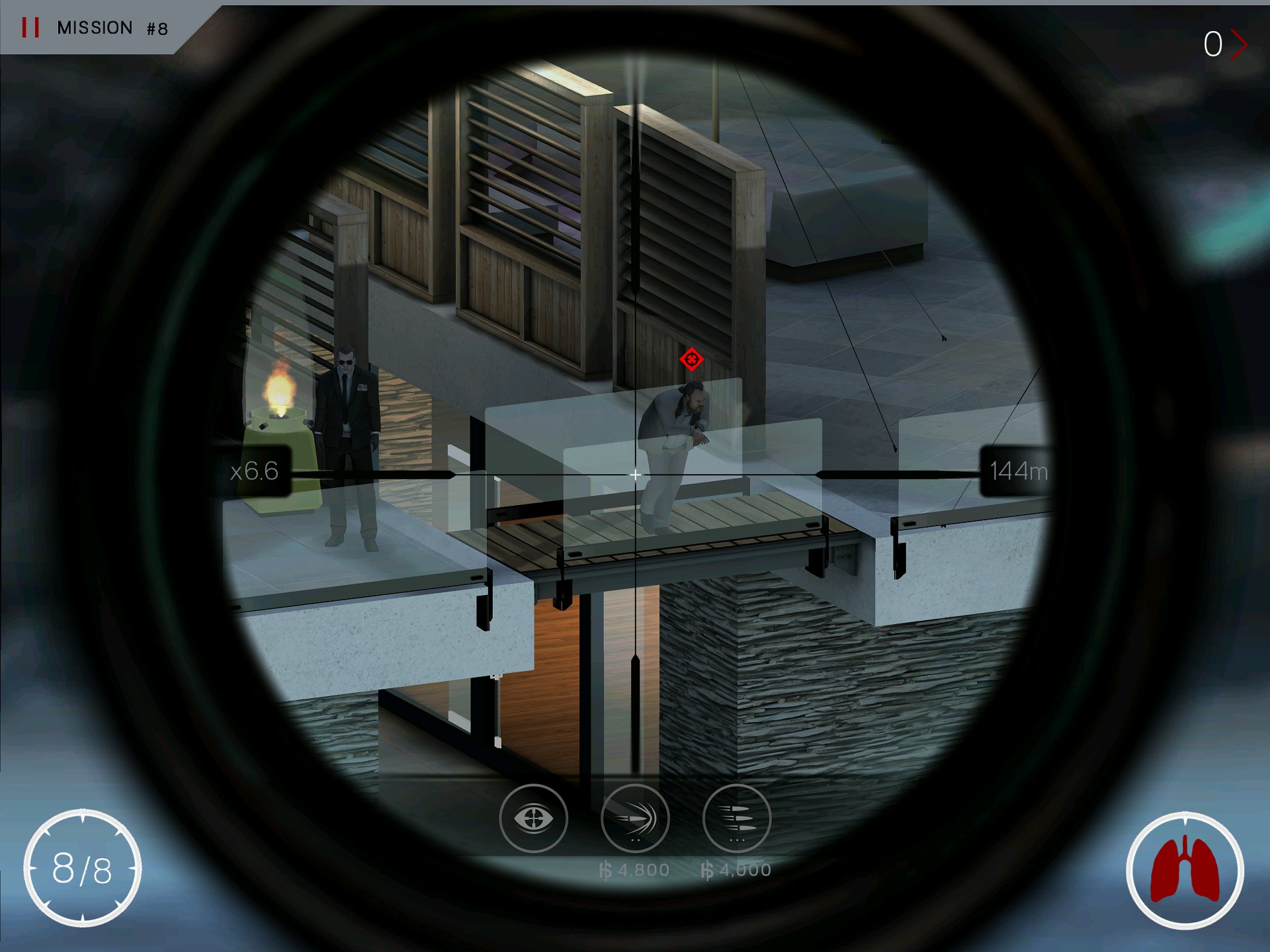 Agent 47's sniper rifle is ideal for touch controls. Pinching the screen can be used to zoom in or out, while an on-screen button will help Agent 47 hold his breath before taking his shot. Shifting the camera around is tied to the touch screen. The game is very straightforward, with the only complications looking to come from upgradable weaponry. Players can unlock these weapons by completing contracts and side objectives.

Just as with Hitman: GO, Hitman: Sniper is not bogged down by any microtransactions whatsoever. This is a full-priced experience, going for $4.99. With the main draw being the game's online leaderboards, there's enough reason to keep shooting for a better time and a better score. Square Enix Montreal looks to have another successful mobile interpretation of Agent 47 on its hands. Look for Hitman: Sniper to hit iOS and Android devices later today.