Disney Infinity has been expanding its toy empire over the course of the past few years. And while it's explored the outer cosmos in the past, Disney Infinity 3.0 will venture to an entirely new universe with the upcoming Star Wars Play Sets.

"It was very important for us to create an authentic and complete Star Wars experience," Lucasfilm Head of Business Development Ada Duan said prior to presenting the first Star Wars Play Set for Disney Infinity 3.0. "We know from research that video games are often the first way that kids experience Star Wars for the first time. We also know that Star Wars is a multi-generational property, so often times, we see parents introducing their sons or daughters to Star Wars in multiple formats beyond the films." 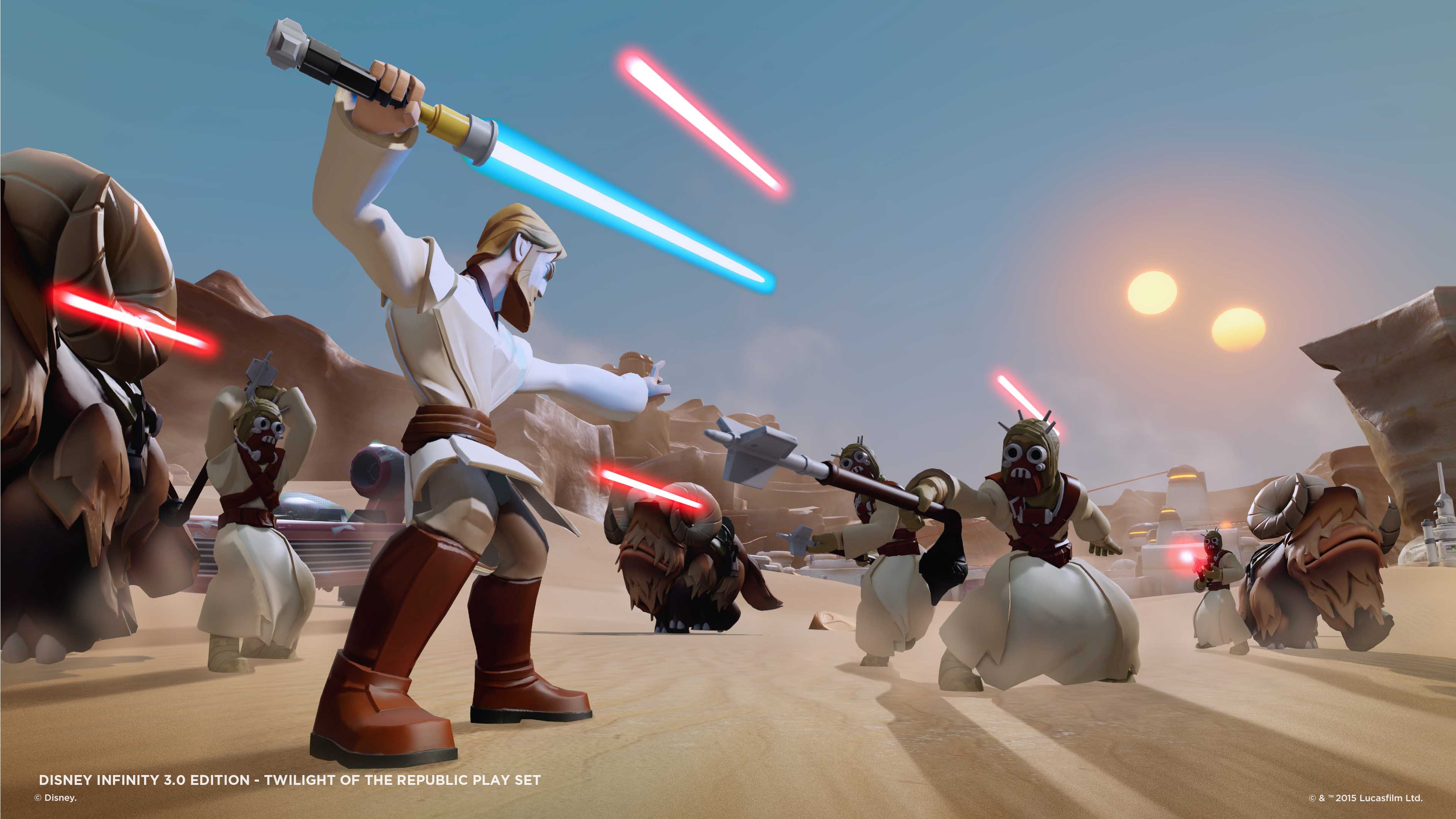 Many younger Star Wars fans were likely introduced to the films through Episodes I, II, and III, as well as the Clone Wars animated series. That's the subject of the Twilight of the Republic Play Set, which will take place during the heated conflict between the Republic and the Separatists. Figures will include Anakin Skywalker, Obi-Wan Kenobi, Ahsoka Tano, and Yoda, each with distinct Jedi abilities.

Watching the hardened team of Jedi landed on Geonosis, the first thing to note is that Twilight of the Republic is an indicator of the ongoing collaboration between Disney Interactive and various developers. This particular Play Set is being helmed by primary Disney Infinity architects Avalanche Software and DmC: Devil May Cry developers Ninja Theory. Ninja Theory's pedigree was of particular interest to the Disney Infinity team, as the developer not only worked on this Play Set, but they also helped refine the game's core 3D melee combat across the board to other non-Star Wars Play Sets.

The changes are noticeable, as there's a more distinct fluidity to fighting off battle droids and pulling off combos. Lightsaber moves can be strung together on the ground or in the air to take out multiple foes. They can also be combined with each character's distinct Force moves. For example, Anakin can draw in any nearby foes to slash them simultaneously, while Ahsoka can Force Push enemies off cliffs to their demise. While the combos didn't have the same exact complexity as past Ninja Theory efforts, the smooth reactions and the ease of pulling off aerial combos was definitely present.

Twilight of the Republic will take players across an original cinematic story based on the Clone Wars show. The sequence I played through had me warding off a droid invasion atop Geonosis, but other environments will include Coruscant, Tatooine, and Naboo. Puzzle platforming sequences, such as the Separatist droid factory on Geonisis, will help mix up the combat, as will a podracing sequence on Tatooine. 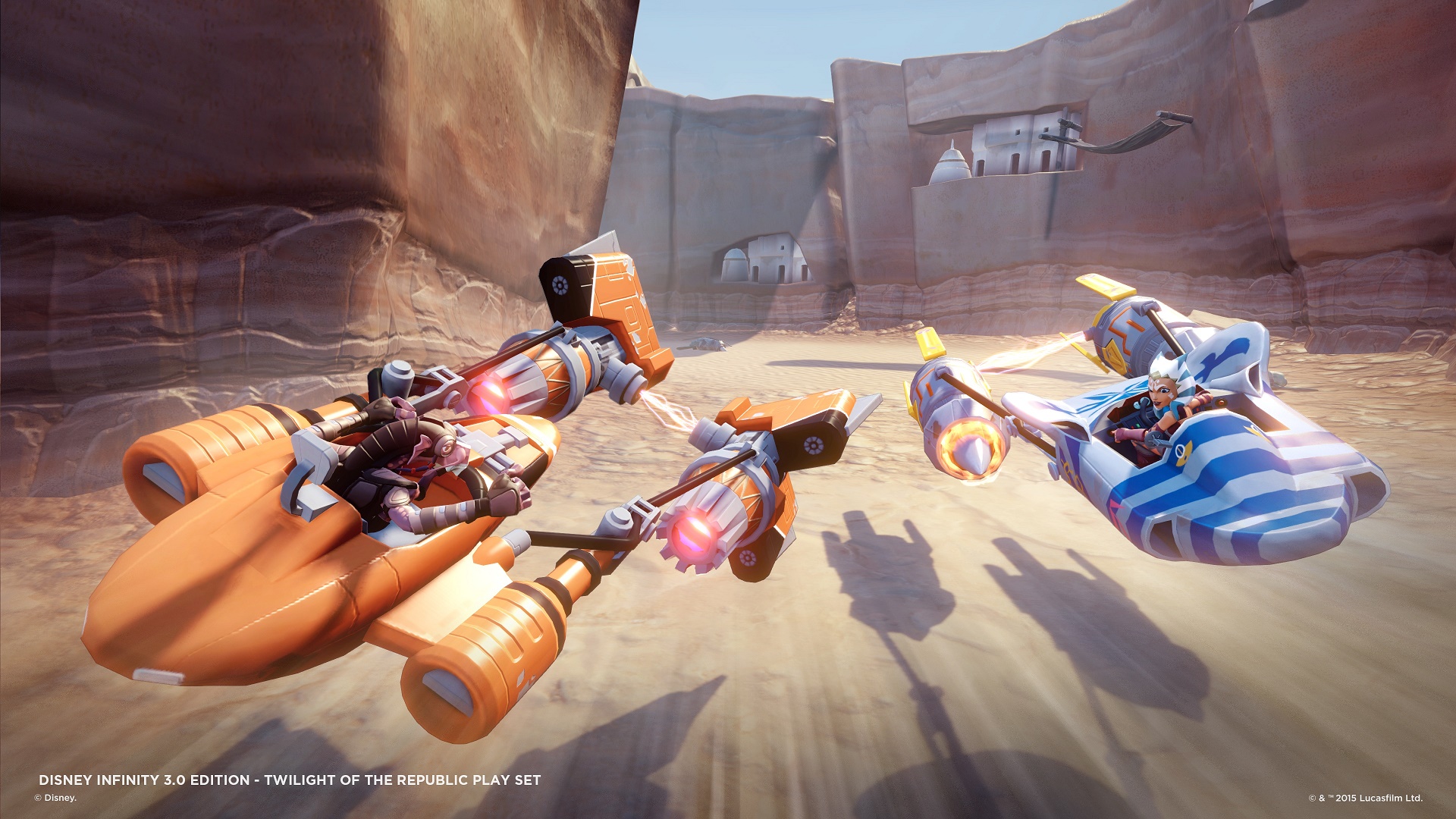 One of the major goals that Disney has for Disney Infinity 3.0 is a return to the "everything is a toy" sensation of the old Play Sets and Twilight of the Republic looks to fit that bill. Of course, all of the set pieces can be placed in Disney Infinity's new and improved Toy Box, which will include several new features, as well as a whole new Toy Box hub and a new online matchmaking feature.

Look for Twilight of the Republic to release alongside the rest of Disney Infinity 3.0 and its Star Wars sets on PC, PlayStation 4, Xbox One, Wii U, Xbox 360, PlayStation 3, iOS, and Android this fall. The Starter Pack will run for $64.99.