Netherrealm has found quite a niche with its fighting games in recent years. On top of elevating the mechanics and adding new gameplay touches, the studio has also stepped up its storytelling by several notches. From Mortal Kombat vs. DC Universe, to the Mortal Kombat reboot of a few years ago, to Injustice: Gods Among Us, Netherrealm has incorporated compelling narrative in seamless fashion to its fighting games. And yes, there is more to the story of Mortal Kombat, with the tale set to continue in Mortal Kombat X. The recent story trailer from a few weeks ago offered a glimpse as to what the continuing conflict of Earthrealm and Outworld would hold, as it fast-forwarded 25 years into the future.

During last week's Game Developers Conference, Shacknews had a chance to play through the first chapter of Mortal Kombat X's story mode. Interestingly, I came away with more questions than answers, not just about the overall story, but also about what the game's final playable roster will look like. 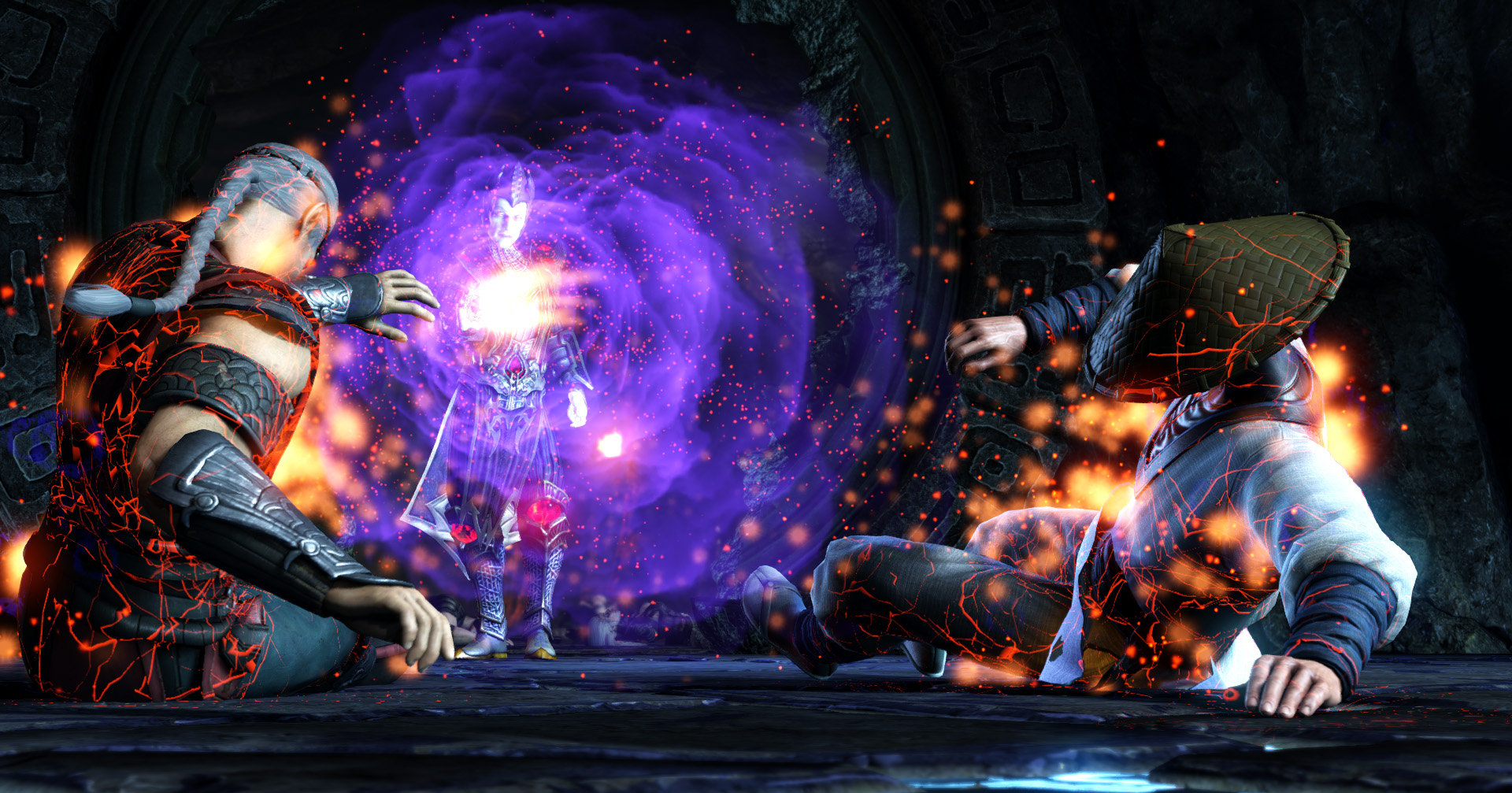 While the story is set to jump ahead to the next generation of fighters, the first chapter actually begins in the present time. It picks up right where the Mortal Kombat 9 story's ending left off, with many of the classic Mortal Kombat fighters slain in the war. Despite Raiden's best efforts, the Outworld forces had spread to Earthrealm. While Shao Khan was vanquished at the end of Mortal Kombat 9, the true puppet master behind everything was revealed to be the fallen Elder God, Shinnok. Over the course of the conflict, Johnny Cage joined the Earthrealm Special Forces, putting him side-by-side with Sonya Blade and the blind warrior Kenshi.

The story kicks off with Cage, Sonya, and Kenshi riding aboard a helicopter, towards the source of the Outworld invasion. Along the ground, military forces were being overrun by the otherworldly beasts that had invaded, with many of the soldiers being dismembered in horrific fashion. The fight soon spread to the helicopter, where Scorpion (flanked by Sub-Zero) teleported in to take out the copter's pilot and co-pilot. While there was a lot of exposition to this point, the sequence that introduced Scorpion suddenly inserted quick-time events, which should be familiar to anyone that played previous NetherRealm stories. Missing a button prompt would cause Cage to get hit in the face, while successfully hitting them would have him go on offense. After the helicopter crash landed, players would take control of Johnny Cage and do battle with Scorpion, followed by a fight against Sub-Zero. 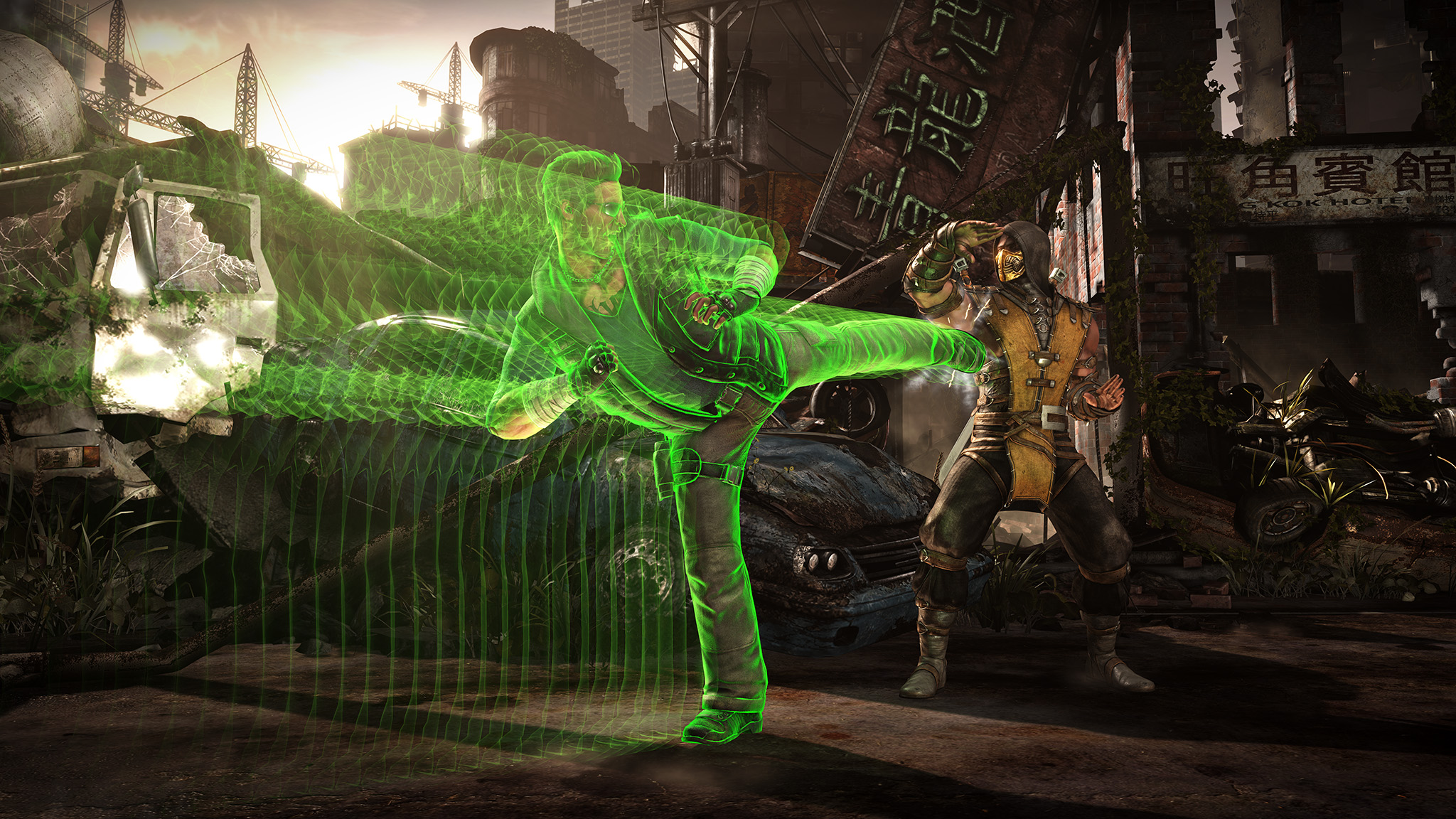 Elsewhere, Raiden and wind god Fujin were warding off further Outworld forces from breaching Raiden's Temple before they were confronted by Quan Chi. Quan Chi was joined by many of the fallen Earthrealm forces from the last game, including Stryker, Sindel, and Kabal. After a lengthy cutscene that saw Raiden and Fujin successfully hold off Quan Chi's forces, before falling back into the temple.

Meanwhile, Johnny Cage and crew started catching up to Raiden, but not before finding another Outworld portal opening up. The portal was opened by the deceased Nightwolf, now under Quan Chi's control. This sequence would once again put players in control of Johnny Cage, as he'd fight against another fallen friend: Jax.

The opening chapter's climax came when Raiden confronted Shinnok in the temple. Shinnok was looking to wreak further havoc with the amulet that was the central plot point of the Mortal Kombat 9 story before Raiden was joined by Johnny Cage and crew. Shinnok looked to blast Sonya, but Cage took the full force of Shinnok's blast. Interestingly, Cage was not affected at all, much to Shinnok and Raiden's amazement. The chapter concluded with a fight against Shinnok, after which the fallen Elder God was absorbed by the amulet.

Mortal Kombat X's opening chapter left more questions than answers, something that will be explored in more detail with a feature set to go up a little later. In the meantime, the only answers we have so far is that Kenshi is set to join the main roster, with NetherRealm debuting him for the Mortal Kombat mobile game. With the mobile game and the main PC/console game set to interact with each other in several ways, it's a certainty that Kenshi will join the fight on the latter, as well. A new trailer (below) also indicates that Johnny Cage and Sonya Blade will both be playable.

Mortal Kombat X is set to continue its story when the game releases on April 14.