Boxboy! preview: cubism at its finest

HAL Laboratory has been known primarily for its work on Nintendo's Kirby franchise, remembered for games like Kirby's Adventure, Kirby Super Star, and the more recent Kirby Triple Trouble. Now the studio is looking to set its sights beyond the pink puffball and dive into an entirely new property. And unlike the colorful world of Dream Land, this new world is purely a world of black and white.

Boxboy! is a 2D puzzle game for the Nintendo 3DS that centers around a simplistic main character named Qbby. He's a block-shaped stick figure that is seeking to make his way across six worlds. Qbby can replicate other blocks to help him reach distant areas and cross gaps. The blocks extend from his body, at which point he can toss them forward.

As later levels introduce hazards, like lasers and spike floors, players can arrange blocks in different patterns to help them proceed. Arranging blocks into L-shapes can help walk safely over spike floors, while jumping onto higher areas. Tetris-style S-shapes can simultaneously help cross gaps and climb to newer heights. And when dangers rain down from the sky, players can put a block above Qbby's head and safely walk forward.

Boxboy! can best be described as a far simpler Portal-style puzzler, with a good amount of substance and very little flash. It appears to be a decidedly no-frills experience, simply getting down to the business of getting from the beginning to the exit. The other main challenge involves collecting crowns, which are only available before using the set limit of boxes. While many of these crowns are easy to collect, the limit can quickly be reached by setting up errant boxes. An "undo" feature would work wonders here, but it doesn't look to be available, with players only able to retry from the pause menu. 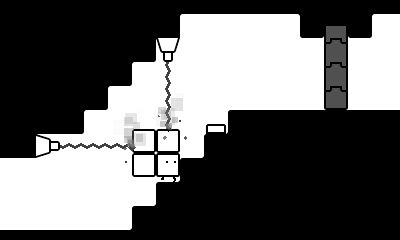 While Boxboy! won't dazzle with its visual style, it's on its way towards being a solid brain teaser. The game is expected to release later this year as a part of the 3DS eShop lineup.