Saints Row: Gat out of Hell review - Hell in a handbasket

Saints Row is kicking off this gaming year by taking a trip to Hell. Saints Row: Gat out of Hell takes all the wackiness of Volition's open-world franchise and takes it into the depths of underworld. It's meant to be an expansion of Saints Row IV and it definitely like one, as it winds up being a short experience that extends on many of the last game's concepts. As brief as it is, though, it's more of the same over-the-top craziness that has made this series a blissful combination of manic violence and laugh-out-loud comedy.

Unlike previous entries in the franchise, the main character is not the President of the United States, as he has been taken to Hell after a random Ouija board accident. Removing the element of character customization is unfortunate, but the trade-off is the ability to control the baddest gangbanger of all-time, Johnny Gat. Gat brings along former FBI agent Kinzie Kensington (who insists on riding along, because it's her birthday) and enters the depths of New Hades in an effort to stop an unholy wedding between the President and Satan's daughter, Jezebel. As one might expect, Gat's main plan involves shooting Satan in the face, so to do so, he's directed on a path of destruction by the Ultor Corporation's Dane Vogel, making his return from Saints Row 2. Players can switch back-and-forth between Gat and sidekick Kinzie at the central Ultor hub, with none of their abilities really changing, though their dialogue is equally amusing. 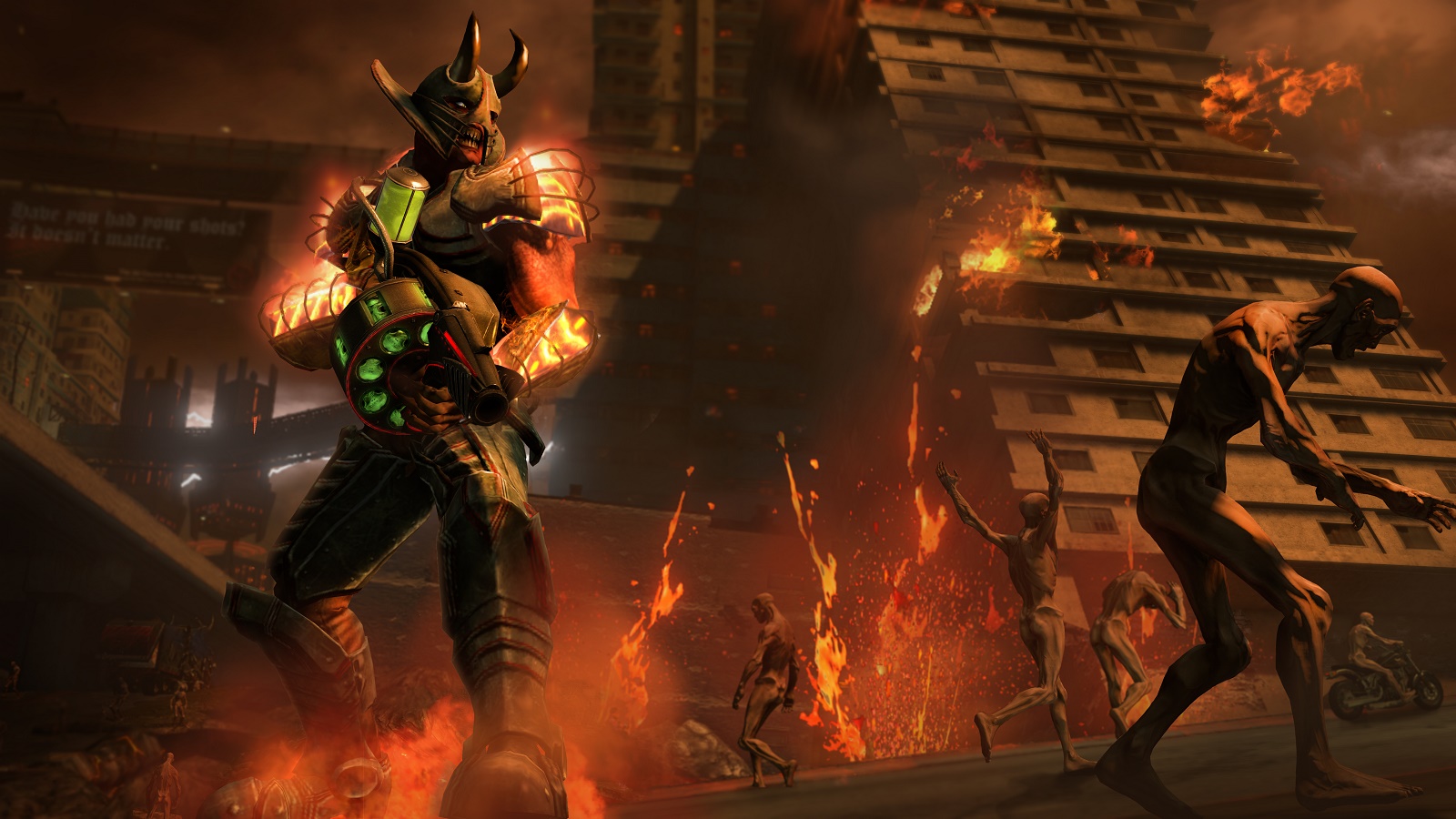 It gives you wings

Not a lot has changed about the Saints Row experience in Gat out of Hell. In fact, Kinzie will quickly make an observation that New Hades is designed awfully similar to Steelport, though the actual city is a bit smaller. Gat can jack cars to get around, but his main mode of transportation is the game's biggest addition: wings, as provided by Lucifer's Broken Halo. Gat can charge a jump and use his wings to glide across the city quickly. Flight is a great addition to the series and the flight controls feel smooth, especially once the flight ability is upgraded. Unfortunately, leveling up flight and other abilities involves collecting clusters scattered around the world, making this yet another instance of having to collect numbers of "glowy bits" to progress. This can get fairly mundane, especially when Gat has to start looking out for missile-shooting spires halfway through the game.

Superpowers also make their return in Gat out of Hell and will offer an air of familiarity for anyone that played Saints Row IV. Powers like the Stomp and the Aura are just as entertaining as they've ever been and prove to be some of the most valuable tools for completing the game's missions or even simply surviving the open world. Of course, they're a supplement for the game's weapons, which are plentiful, thanks to the vending machines that are littered across New Hades. Those looking for fancier ways to dispatch foes can unlock the game's Seven Deadly Weapons, which are delightfully weird. The Armchair-a-geddon, in particular, is a treat to use, as it's simply Gat lazing back on a recliner that shoot dual gatling guns and fires missiles. 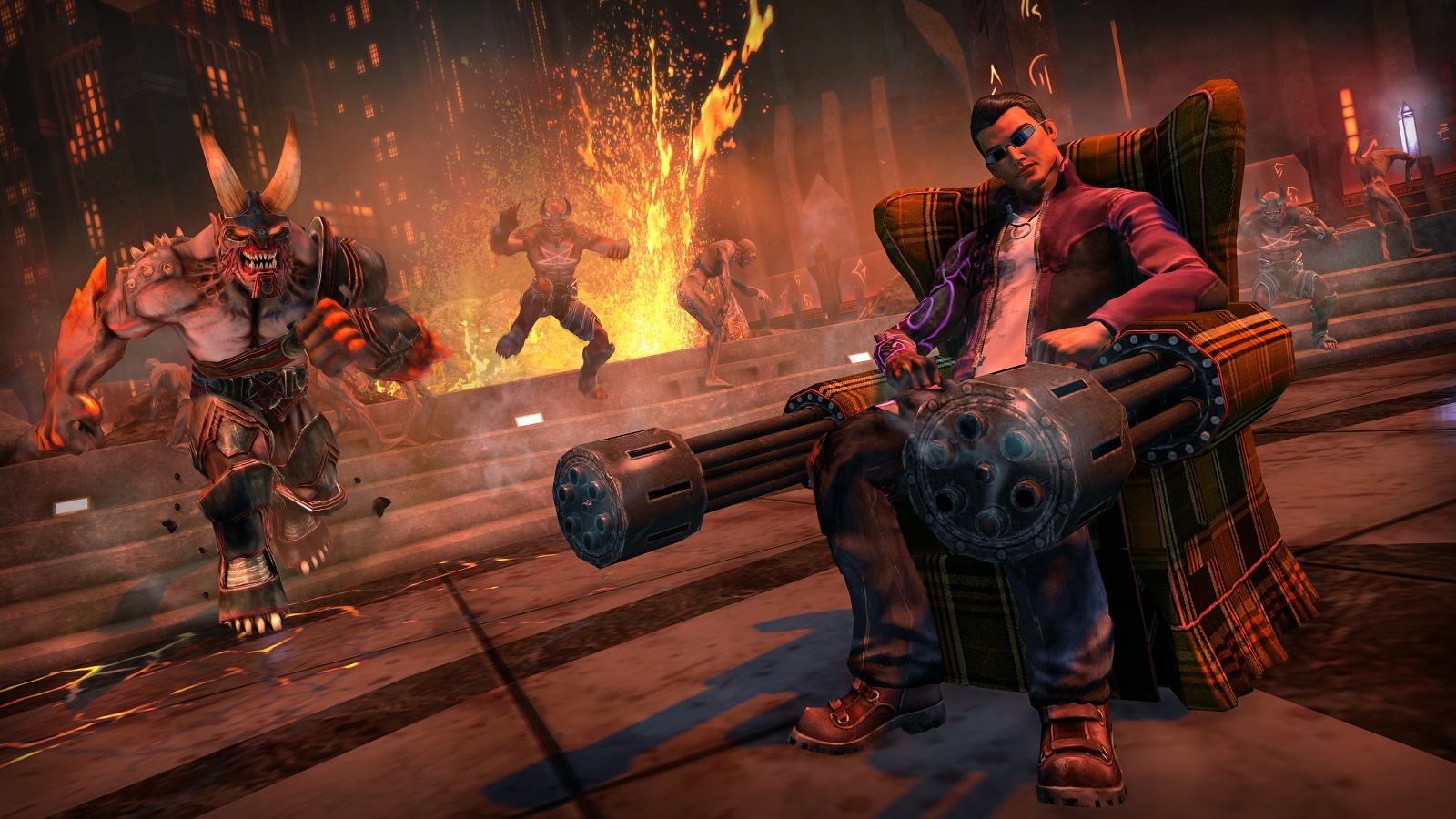 The definition of insanity

For those that enjoyed the Saints Row mini-games, Gat out of Hell is pretty much just that. After meeting up with a gang of Satan's would-be betrayers (including William Shakespeare as a club DJ, in a brilliant turn), each of them ask Gat to win them over by completing a handful of the usual Saints Row mini-games. While some of them are the standard Mayhem destruction and the newly-dubbed Torment Fraud, there are a couple of new concepts that further wade the waters of insanity that the series is known for. Pledge Rush sees Gat running around a frat party with a paddle, whacking frat demons into goal portals. Meanwhile, Salvation will see Gat using his wings to catch fallen souls before they hit the ground. The new activities make for some fun diversions and are a good reminder of how varied a Saints Row game can be.

However, it doesn't take long to realize that there isn't much more meat to this package. There's no grander story at play here, as the main narrative will unfold over a fairy tale-style storybook narration every couple of missions. Aside from that, there are really no other story-based missions, no other main characters to interact with, or any other incentive to take over New Hades. Even Gat's interaction with characters like Shakespeare and Blackbeard, feel all-too-brief, while the final battle feels like an anticlimax. The only incentive to play through the game after it's over is to see the multiple endings, all of which fit in perfectly with either Johnny Gat's character or with the over-the-top nature of the Saints Row series, as a whole.

There isn't a whole lot of depth to Gat out of Hell, so anyone looking for a fuller Saints Row experience more akin to Volition's past couple of efforts will be disappointed. In fact, I was able to finish the game in about roughly six hours. With that said, there's a certain satisfaction to be had when it comes to raising hell in the underworld. While character customization is gone, Johnny Gat has been something of a mythological figure in Saints Row lore and Volition makes his first playable appearance a grand one.

Volition knows exactly what the Saints Row series is. It's dumb, enjoyable fun that's not to be taken too seriously. Gat out of Hell certainly fits that criteria and though it's a smaller package this time around, it's still nice to take a short weekend trip to hell. Just don't expect to stay very long.

This review is based on a PlayStation 4 download code provided by the publisher. Saints Row: Gat out of Hell is available in retail stores and on Steam, the Xbox Game Store, and PlayStation Store. The game is rated M.

Ratchet & Clank: Rift Apart review - A dimension above the rest