The tale of Geralt of Rivia is finally set to continue this coming May. Last week, Shacknews had the opportunity to go hands-on with the third chapter of the Witcher series, The Witcher 3: Wild Hunt. After trying out the first three hours of the game, it certainly appears that CD Projekt Red isn't taking any chances with what's deemed to be their opus. Everything that's come to be expected from this line of games appears to be intact and the world looks to be just as ripe for exploration as it ever has.

It doesn't take long for The Witcher 3 to show off its recognized propensity for gorgeous art and amazingly lifelike character models. The game opens with Geralt bathing in a wooden tub, while Yennefer of Vengerberg sits nearby and prepares for the day ahead. Each character is stunningly detailed, right down to minor skin blemishes and freckles, something that's even evident in the Xbox One version that I was using for the demo. Geralt meets up with Vesemir to help train a young Ciri, which doubles as the game's tutorial, before the Nilfgaardians appear to abduct her. That's when it's revealed that the whole thing was a dream sequence, with Geralt and Vesemir out in the open world.

The first part of the game sees Geralt out in search of Yennefer, as he and Vesemir immediately rescue a merchant on the receiving end of a griffin attack. After sending the griffin running, they take refuge in a village tavern, as Geralt looks for aid in his search. Of course, the villagers all consider the Witchers to be freaks and often greet them with hostility. This gives Geralt the opportunity to try out his conversational skills, as well as his mind control skills, should any louts get out of line.

Part of the time in the tavern is spent learning one of The Witcher 3's side games, a card game called Gwent. It's a bit of a complicated game, with each side laying down separate battlefield units and spell cards that affect the field conditions. Winning Gwent hands will yield greater rewards down the line, but the game's rules can become needlessly complicated that I'll be very tempted to skip the whole thing.

Following the excursion to the village, it was time to further explore the open world. A bulletin board near the edge of the village contained several side quests and tasks for those looking for a diversion. I grabbed the side quest from a gentleman that was looking for an exorcism near a well. He was hoping to treat his daughter's illness with purified well water, but the well was haunted.

The world is vast and objectives aren't all that close to one another. So horse riding is an important component to The Witcher 3, with Geralt able to call his trusty horse, Roach, at any time. Roach can move quickly, with enough stamina to get him across fields in seconds. The only obstacle is the occasional wild animal attack. At one point, a trio of wild wolves launched an unprovoked attack, which frightened Roach and sent him scurrying away, leaving Geralt to fight them off. The world is filled with wildlife, some of which are hostile like the wolves, and others that can simply be wiped out for the heck of it. At one point, a group of deer wouldn't get out of my path, so I fileted them with fire magic and scooped the raw meat up for my inventory. 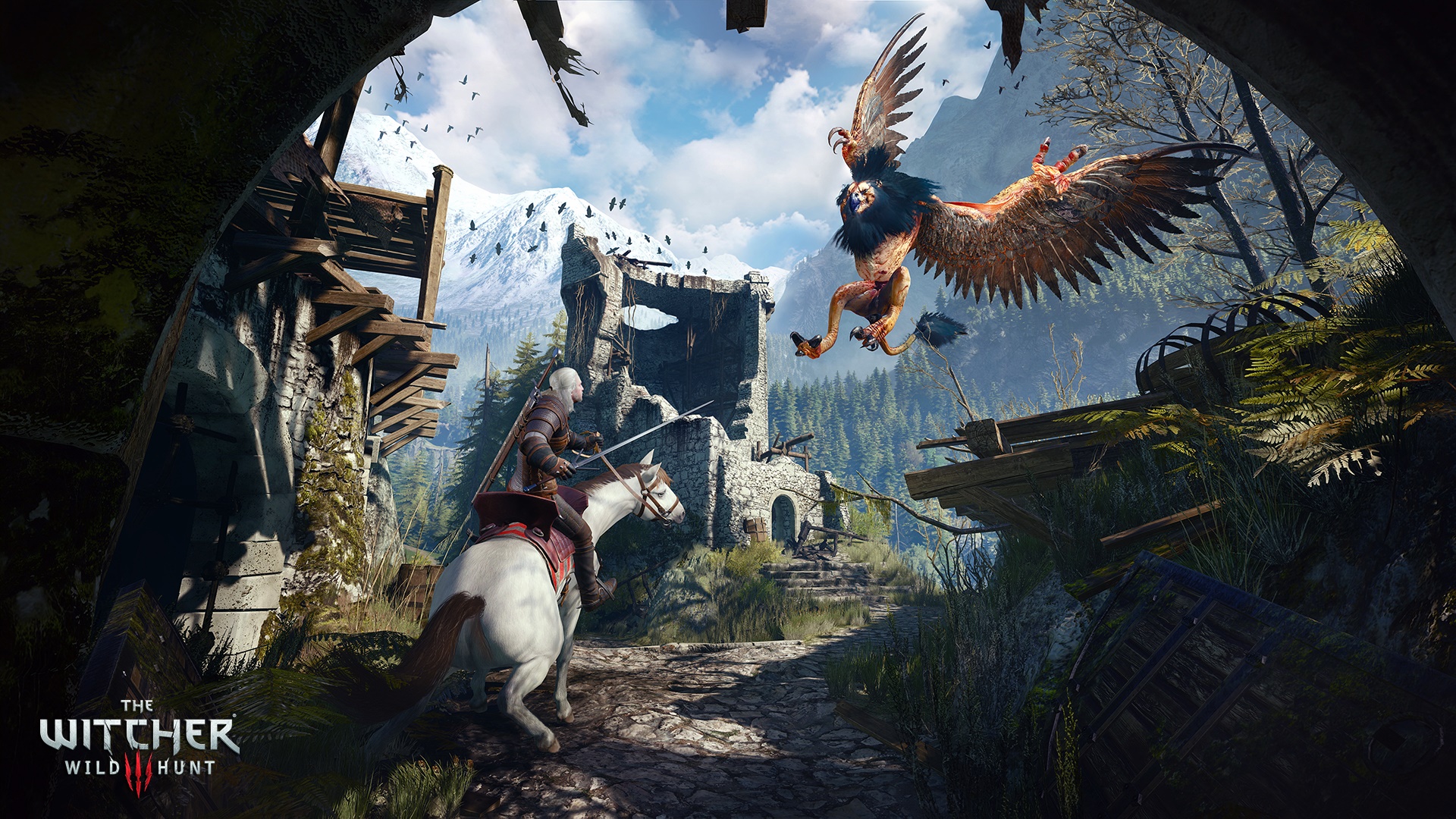 After dispatching the wolves, I headed over to the well to see another of The Witcher 3's main draws in action. Because Geralt is a knowledgeable Witcher, he fully scans the area with his Witcher senses and makes keen observations, not unlike forensics investigations. Geralt will make note of anything that seems out of place, while also making note of any strange behaviors. His investigation eventually leads him to the conclusion that a Noonwraith (a ghostly bride murdered on her wedding day) was haunting the area, which leaves instructions for how to prepare for the eventual battle. One of the best ways to do so is to scan The Witcher 3's Bestiary menu, which will offer lore on any creature (living or dead) that Geralt encounters. It'll also outline any creature weaknesses, indicating which magic spell Geralt should have equipped. In the case of the Noonwraith, Yrden magic is required to even expose the creature, otherwise it remains intangible.

Following this encounter, it was time to get back to killing the griffin. This main mission featured several stages that saw Geralt bounce back and forth across the world. Before facing the griffin, he had to investigate the nest, create a concoction to lure it out, and question any witnesses to its rampage. Once that was all finished, Geralt received the crossbow from Vesemir and it was time to fight.

The griffin fight was brutally difficult. The first thing to note was that there were a couple of bugs to compete with. First off, the crossbow did minimal damage to the point that the devs acknowledged that it was underpowered for this fight. The other issue at-hand was that eating food after the griffin inflicted bleeding resulted in my health meter actually going down further, meaning I had to pick when I ate.

The griffin hits extremely hard, taking to the skies and swooping down. Again, the Bestiary comes in handy here and will prove to be one of your best friends throughout this games. The Bestiary noted that the griffin was vulnerable to Aard telekinesis magic, which would take the beast down in mid-flight and leave it momentarily stunned. Even with this knowledge at hand, the battle took roughly a half-hour and a lot of trial and error. Vesemir proved a strong ally in this fight, but knowing when to hang back and fight smartly was the only way to prevail. Finally taking the beast down proved to be more of a rush than I expected and will hopefully prove to be a mere sample of what's available to fight. It should be noted that after all the wild animal attacks, the completed quests, the run-in with the Noonwraith, and the all-out war with the Griffin, Geralt had only leveled up to Level 2. Leveling up in this game is going to take an ample amount of side quests and a hefty time investment.

Those looking for lore will find plenty of that throughout their time with The Witcher 3. It'll come through more than simply the main plot line. Many of the game's side quests will feature characters that have their own individual stories to tell. There was the aforementioned villager whose daughter fell ill, due to the water that's been poisoned by soldier corpses. Geralt also bumped into several characters along his path to the griffin, including an herbalist who found herself living away from the war-torn area and a hunter that was exiled after his gay tryst with a lord's son was exposed. CD Projekt RED is putting a lot of care into each individual character's tale, as well as how their stories are potentially affected by their interactions with Geralt. What remains to be seen is how dialogue options will affect these stories, as I didn't notice too much of a difference with different dialogue choices.

It's easy to see why The Witcher 3: Wild Hunt is among the most anticipated games of the year. With an intuitive control scheme, a fully fleshed-out world, strong characters, and some of the best visuals I've seen out of an RPG in quite some time, CD Projekt RED are doing their best to outdo the previous Witcher game. And though it'll take quite a lot to surpass the quality of the 2011 Shacknews Game of the Year, I left my time with the game feeling encouraged that they could do so.

The Witcher 3: Wild Hunt is set to release on PC, Xbox One, and PlayStation 4 on May 19.

This Witcher 3: Wild Hunt preview was based on a pre-release Xbox One version of the game at an event where transportation and accommodations were provided by CD Projekt RED.