Hearthstone: Goblins vs Gnomes class combos to look out for (part 2)

Hearthstone's Goblins vs. Gnomes expansion has been out for a little over a week. With Android owners just starting to catch up with everything, the time seems ripe to break down some of the expansion's more potent combinations. Before starting off, it should be noted that there are dozens upon dozens of lethal combinations involving GvG cards, so this will be a bit of a starter column. We'll offer up one combination to try out for each of the game's nine classes before returning next week with input from our expert players in the Chatty community.

Let's continue with a look at the rest of the game's classes. For those that would like to look at the Mage, Warlock, Rogue, and Shaman, be sure to visit part 1 of our feature. 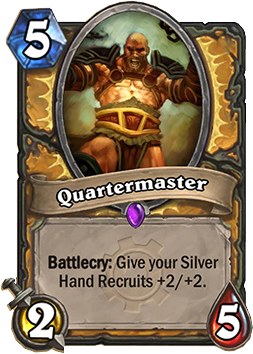 This is a pretty basic combination for the new Paladin cards. Muster for Battle seems pretty useless on the surface, since Silver Hand Recruits are fairly brittle. Just about any area of effect spell can wipe out 1/1 minions, so a simple Arcane Explosion, Cone of Cold, Consecration, Holy Nova, or Unleash the Hounds will end these Recruits before they can even attack.

That's where Quartermaster comes into the fold. Assuming you've been able to clear the board beforehand (using Equality and Consecration), this is a fearsome Turn 8 play that will leave three 3/3 Silver Hand Recruits and a 2/5 Quartermaster on the field. Barring total disaster, like a Mage playing Flamestrike, this should be enough to chip away at your opponent.

For the sake of argument, let's say that your opponent does have a counter measure ready to take out your minions. If you have Bolvar Fordragon in your hand, it should be a quick way to bounce back on the next turn, especially if you give him Divine Shield with any of the Paladin's various spells or Shield-granting minions. 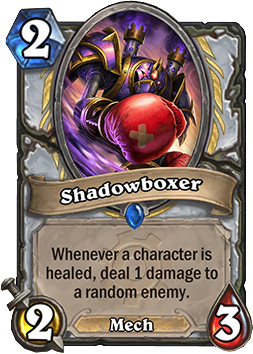 Shadowboxer is a half-decent 2 mana minion that boasts 2/3 stats, but it's an annoyance if Anduin can hide him behind Taunt minions. However, for the purposes of this combo, you'll want to use him for his effect, in which he deals 1 damage to a random enemy for each character healed.

Priests that have multiple minions deployed on the field will likely need some healing, which is where Holy Nova has always been effective. Now on top of dealing its 2 damage to all enemies, a Holy Nova burst will also have the double-whammy of Shadowboxer popping random enemies for each character healed, making it a potent Turn 7 play.

You can also roll the dice with the far-cheaper Circle of Healing, but that spell will also heal enemies, so it might not necessarily be worth the risk. 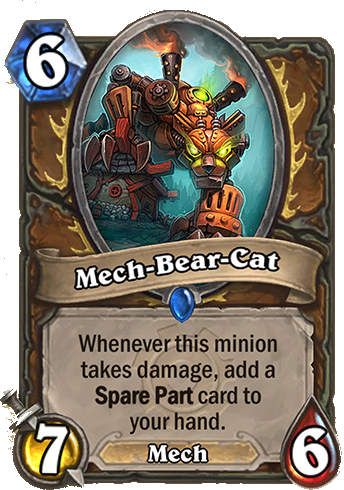 Spare Parts are an interesting new addition to the Hearthstone meta game and they often range from helpful boosts to complete game-changers. Assuming it doesn't get polymerized, Mech-Bear-Cat will offer at least one Spare Part if it takes any kind of damage. So why not force the issue by giving it Taunt? Mark of the Wild will offer +2/+2 for 2 mana, making it a fierce 9/8 Taunt minion. But for an extra mana, you can turn this minion into a tank by using Mark of Nature, which will grant an extra 4 health with Taunt.

Whatever happens, the Spare Parts should hopefully come in by the handful. Even if they don't, this play will at least buy players some time to play some of the other minions in their hand, while boosting them with some Attack or Health parts.

Of course, there's always a chance that Mech-Bear-Cat may not be long for the world, because your opponent may have a spell ready to deal with it. If that's the case, try and force the issue. If you use Mark of the Wild and have 2 mana to spare, whip out Mad Bomber and roll the dice. 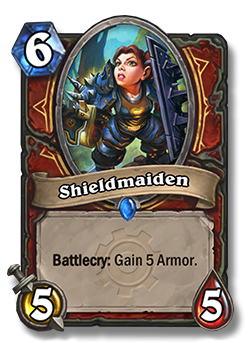 Shieldmaiden is one of the most powerful new minions to hit the Warrior's ranks and you'll be seeing her a lot in every deck. A lot of the reason for that is for this combo that can wipe out just about any minion on the field.

Shieldmaiden's effect will instantly add 5 armor for Garrosh, while Shield Block will add 5 more and offer a card draw. With Shield Slam's low 1 mana cost, that still leaves room to use Shield Slam on any enemy minion, which will hit for a massive 10 damage. And it will hit for 10 at the least. If you've hoarded armor by using Armorsmith, chances are, you will have enough power to wipe out any minion in the game, provided they aren't protected with Divine Shield. Even Ysera and her 12 health may not be able to withstand that kind of power. 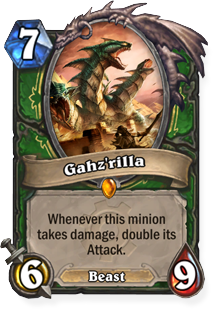 EEEEEEE-YEOW!!! Just in case Rexxar wasn't powerful enough already. Gahz'rilla is a beast in every sense of the word, but this combination will bring just about any opponent to their knees.

Because Gahz'rilla's attack will double for each time it takes damage, it's in your best interest to wait for Turn 9 to lay it down. Drop him and Wild Pyromancer to prepare your opponent for pain. Play the 0-mana Hunter's Mark card to reduce an enemy minion's health to 1 and watch Wild Pyromancer's effect wipe it from the board. The effect will also hit Gahz'rilla, bringing it up to 12 attack.

The possibilities for what's next are practically endless. Use a Spare Part. Boom! Double attack again! Or hit another enemy with Arcane Shot and watch Gahz'rilla's attack hit 24. Better yet, hit Gahz'rilla with it and watch his attack skyrocket to 48!

If you run into this combination, you'd better hope your enemy Hunter doesn't have Tundra Rhino on the board or it's likely game over.

That's our peek into combinations for each of Hearthstone's nine classes. But that's not the end. Come back next week when we'll solicit our Chatty community for their best GvG combinations and post them here on Shacknews.