The first thing to note is that this is a completely different game than the original Fat Princess. The series is moving from competitive multiplayer game to a co-op hack-and-slash, hence the 'Adventures' part of the title. The core premise of escorting Princess Plump is still in place, but it's now within the confines of a different genre. 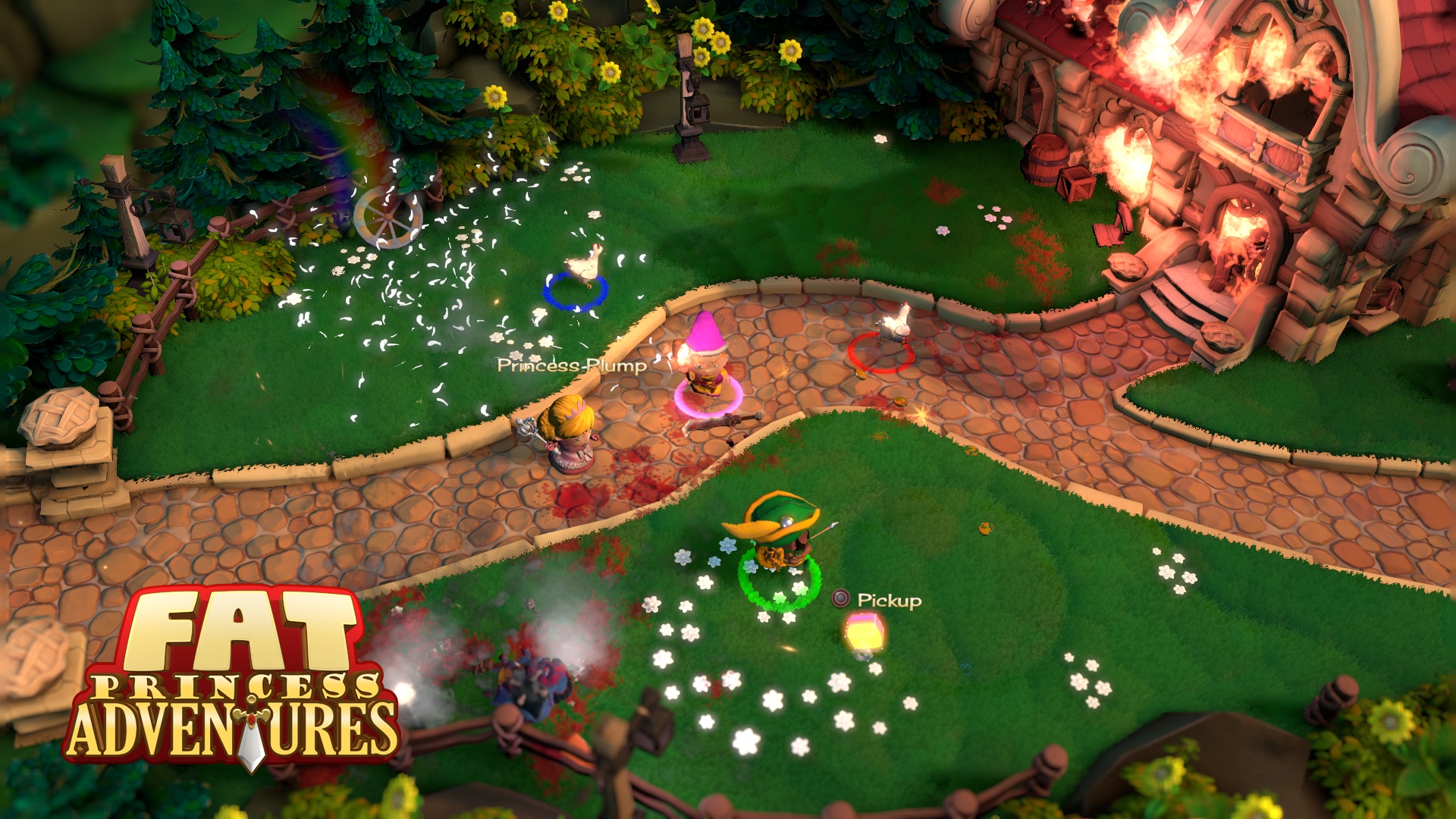 The demo for Fat Princess Adventures saw me escorting Princess Plump to a castle rendezvous point, taking on different enemy types as I moved along. The game is played with an isometric overhead view, overlooking a whimsically colorful medieval world. Just as in the previous game, there are four different classes, each with a unique ability. The classes include Archer, Engineer, Warrior, and Mage, each with their own distinct weaponry that can be upgraded over time. There are designated stations to switch classes, which will prove necessary to those playing with parties of less than four. A few instances saw the ground littered with traps, which needed to be diffused by the Engineer. While this was the only class-specific scenario I bumped into, other similar sequences will likely be in place for the game's other four classes.

Much of the action in Fat Princess Adventures is fairly standard, with attacks and spells able to clear out enemies that quickly amass in numbers. They'll begin to cause damage soon enough, but recovery items will fall on the ground, as well. Cake will help recover health, but eating too much of it will cause your character to become morbidly obese. This will make standard weapons unusable, but it'll give your character tank properties for a brief period. Another common drop is a transformation potion, which can be hurled at enemies to turn them into chickens that can't attack. Unfortunately, this weapon has a splash range, so if you throw it in close quarters, you'll just as easily turn yourself into a chicken for a brief period. And that's just fowl.

The difficulty seems to amp up with less players, but partners can drop in and out at any time to lend a hand. As my character kept dying and teleporting back to the previous checkpoints, other passersby grabbed a controller and jumped in to help out. Princess Plump will also make herself useful at various points, hurling her own attacks at enemies. Unfortunately, she'll also just as often get chased into a corner, meaning you'll have to retrieve her before you can proceed.

The light-hearted tone of the previous Fat Princess remains fully intact here. It's more than just the rampant obesity and runaway poultry, too. The narration and dialogue are filled with good, clean humor and the banter will often vary depending on the classes currently in play. Heroes are fully customizable, with players able to select between comic, emo, hero, and evil genius personalities, all of which will affect the dialogue between characters. Even the enemies will get in on the chuckles, with the demo's end boss, Zug the Gatekeeper, crashing onto the scene with the bold declaration, "This demo not over yet!"

Fat Princess Adventures doesn't look like it'll revolutionize hack-and-slash adventure games, but Sony Santa Monica and Fun Bits Interactive are at least making it fun. It should hopefully have enough grin-inducing moments to warrant a full playthrough and since couch and online co-op are both supported, finding friends shouldn't be too hard. Fat Princess Adventures is expected to release on PlayStation 4 in 2015.