Tearaway was a largely unappreciated gem from Media Molecule, having released during a rather crowded release week. Make no mistake about it, though, it definitely carried the signature charm that this studio has become recognized for, receiving positive accolades from critics and fans. So it came as a pleasant surprise when Tearaway Unfolded, a console follow-up to the original, was announced earlier this year. Shacknews had an opportunity to pick up Tearaway Unfolded during this past weekend's PlayStation Experience event.

Those concerned that a console version of the handheld papercraft platformer wouldn't carry the same charm will be relieved to hear that the adorable atmosphere appears to be fully intact. The idea of controlling a papercraft 'Messenger' delivering a message to 'You' (the player) is still the central premise, right down to showing your own live image on the title screen with the PlayStation Camera. The demo I tried out does indeed center around a Messenger named Atoi, who is taking refuge from a murder of crows while trying to make a vital delivery. 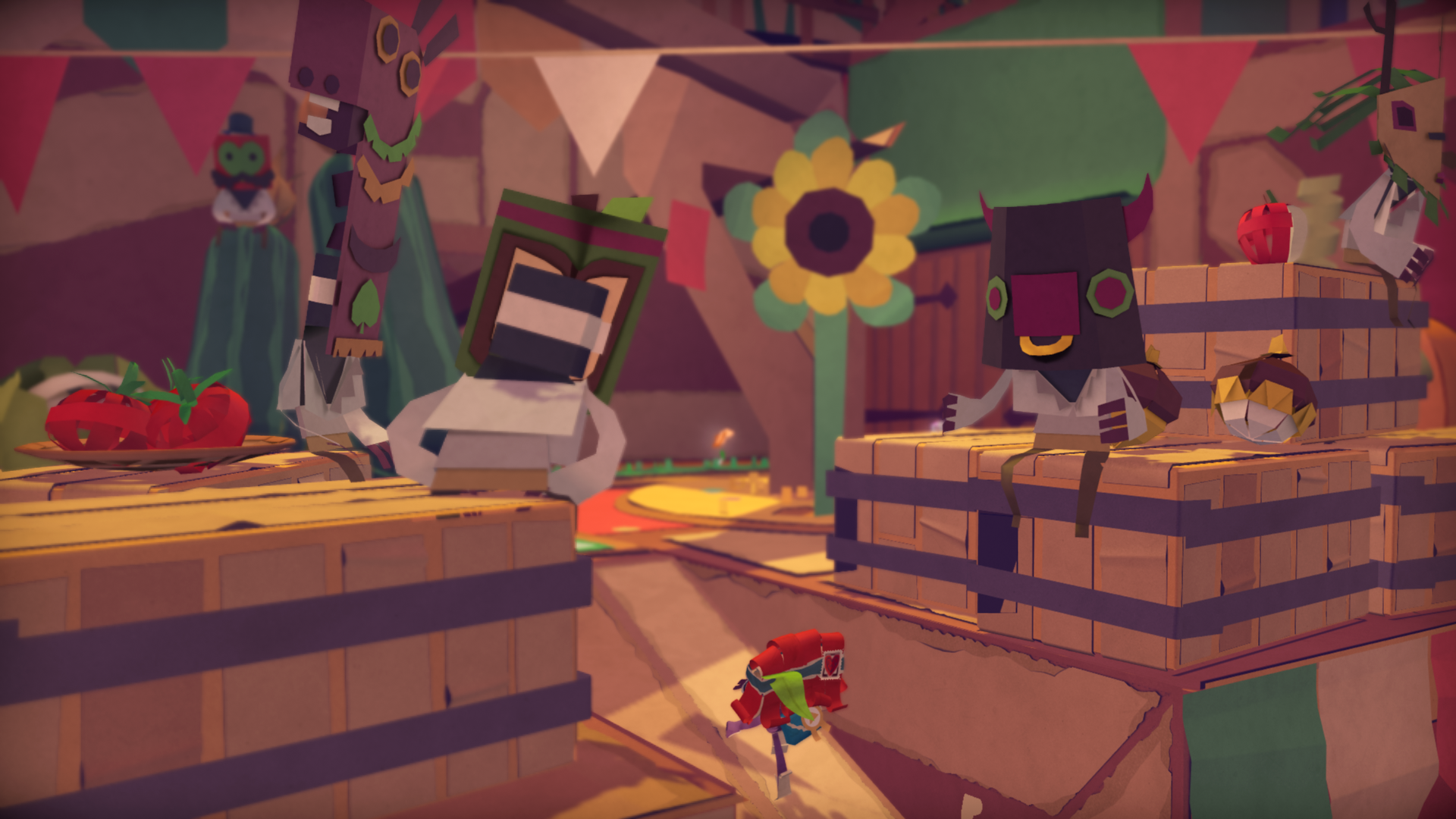 Just as the Vita version of Tearaway took full advantage of the handheld's capabilities, Tearaway Unfolded likewise utilizes the PlayStation 4's tools of the trade, most notably the DualShock 4 controller. For example, certain pieces of the world can be fully manipulated using the controller's touch pad. Pressing the touch pad button will beat drums along the ground and launch anything on top of them in the air. This can be used to help Atoi run across certain areas filled with rolling vegetables or other obstacles.

Another major mechanic involves having 'You' hold an item. In another display of the series' fourth wall breach, Atoi can toss over acorns or other items directly to 'You' to help solve certain puzzles. The most frequent scenario saw Atoi stand along one side of a catapult, requiring the acorns to be hurled to the opposite end to help launch her towards higher platforms. This mechanic can also be used to clear out debris in certain areas or even just cause general mayhem. I saw an NPC running endlessly on a conveyor belt, so I chucked an acorn at him to knock him down and send him plunging to his doom.

This demo didn't have too many enemies, but the one sequence involving enemy Scraps did introduce the Guiding Light mechanic. By holding L2 and R2, 'You' can shine a light on the screen that can enrapture the Scraps. Using the DualShock 4's motion controls, the Guiding Light can send the Scraps towards a cliff, sending them to their deaths in Lemmings-style fashion. This mechanic can get a little tricky, though, since the light can often get caught behind other objects. If the Guiding Light's trajectory is blocked, the Scraps will quickly come to their senses.

Tearaway Unfolded is also filled with its share of adorable characters, some of whom occasionally need a hand. I bumped into one character that was bemoaning the loss of his mustache, so I was prompted to carve him a new one. After cutting out a new mustache with the analog sticks and putting it on his face, he was happy as a clam, even if its shape did look a little iffy. These NPCs will be all over the world and players will be given ample opportunity to play around with the world's papercraft concept, creating shapes from scratch or putting their artistic skills on display.

Media Molecule is looking to take advantage of every aspect of the PlayStation 4 and they seem to have a good grasp on the DualShock 4's touch pad and tilt sensors. It sure feels just as bright and cheerful as the Vita original so far and hopefully, the game's development will continue along this path. Tearaway Unfolded is set to release on PlayStation 4 in 2015.