Game developer Jagex is expanding its RuneScape franchise beyond the MMO space for the first time with Chronicle: RuneScape Legends. Launching in 2015, the collectible card game (CCG) will be playable across PC, Mac, tablets and smartphones.

With 13 years of mythology to work with, a small team at Jagex has been developing an experience that connects the MMO world with the new CCG. Played out within the pages of a living book the game focuses on quest building, allowing players to craft their own miniature RPGs against enemies, including classic RuneScape boss monsters, before entering into tense PvP combat. Mark Killey, senior producer on Chronicle, talks about the new game in this exclusive interview.

Where did the CCG come from here at Jagex?

We had been experimenting with mechanical prototypes of new RuneScape related games and one of those had an automated quest system, which told you afterwards what had happened to your character. We looked at this and wondered if there was a way we could turn it on its head by making a game in which you build a quest for your character to complete. This in turn lent itself to being structured with cards, so you would place down cards in a certain order to build a quest.

We made some initial physical prototypes that we thought were good fun and proved the original concept. We then decided to start building a full digital prototype, which evolved into what we’re working on now.

Can you talk a little about the look and feel because this has a unique environment that you go and battle in?

The game is set inside a magical book, from which a 3D world emerges and builds in front of your eyes. Each of the worlds contains slots in which you place the cards and build the quest for your legend to complete. 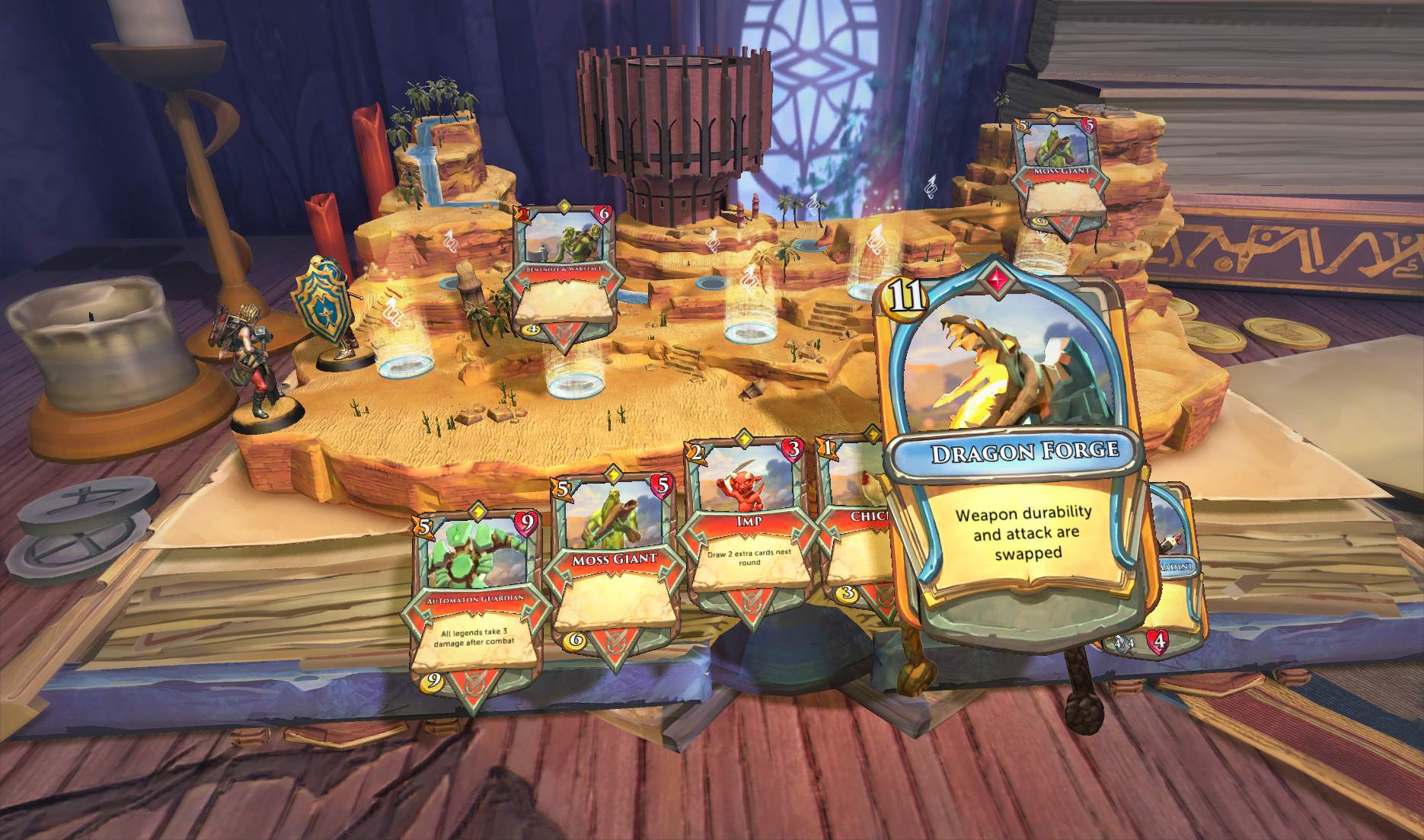 What are some of the environments people will be playing in?

So far we’ve only revealed the Al Kharid desert area, but the final game will feature multiple different areas and environments taken from the world of RuneScape.  For example, Lumbridge is an obvious one for us to try out.  There will be different terrains for players to explore like ice, forests and some swamps.

Could you explain what the differentiator between the two card types is?

The two types you’ll encounter are Fight and Adventure cards. The Fight cards take the form of hostile characters that you’ll have to battle in order to earn gold or items. The Adventure cards are what you spend your hard earned gold on; they’ll give you buffs to your character to increase their health or damage levels.

Could you talk a little bit about the characters themselves, because the cards disappear?

You control a character who travels through the game world completing the quest you have laid out in front of them, battling or purchasing each card in turn. In the video we’ve revealed two different hero types, but the final version of the game will be a lot more to choose from. These are fully articulated 3D characters that you put down into the 3D world and explore. When you’re fighting a hostile character, your card will actually engage in combat with that card.

Could you talk about some of the combat that you’ll go up against, some of the different characters people will be fighting against that they’re familiar with from the video game?

When it comes to each story or chapter, can you talk a little about how that progresses because it’s more than just one environment you’re going through?

Each environment has multiple pages with different layouts; these can also have varying slot effects that you can use to your advantage.  Each chapter will likely be between three to five pages we think at the moment.  Each of the pages will have different landmarks from the RuneScape world that you’ll be familiar with like the Dominion Tower. 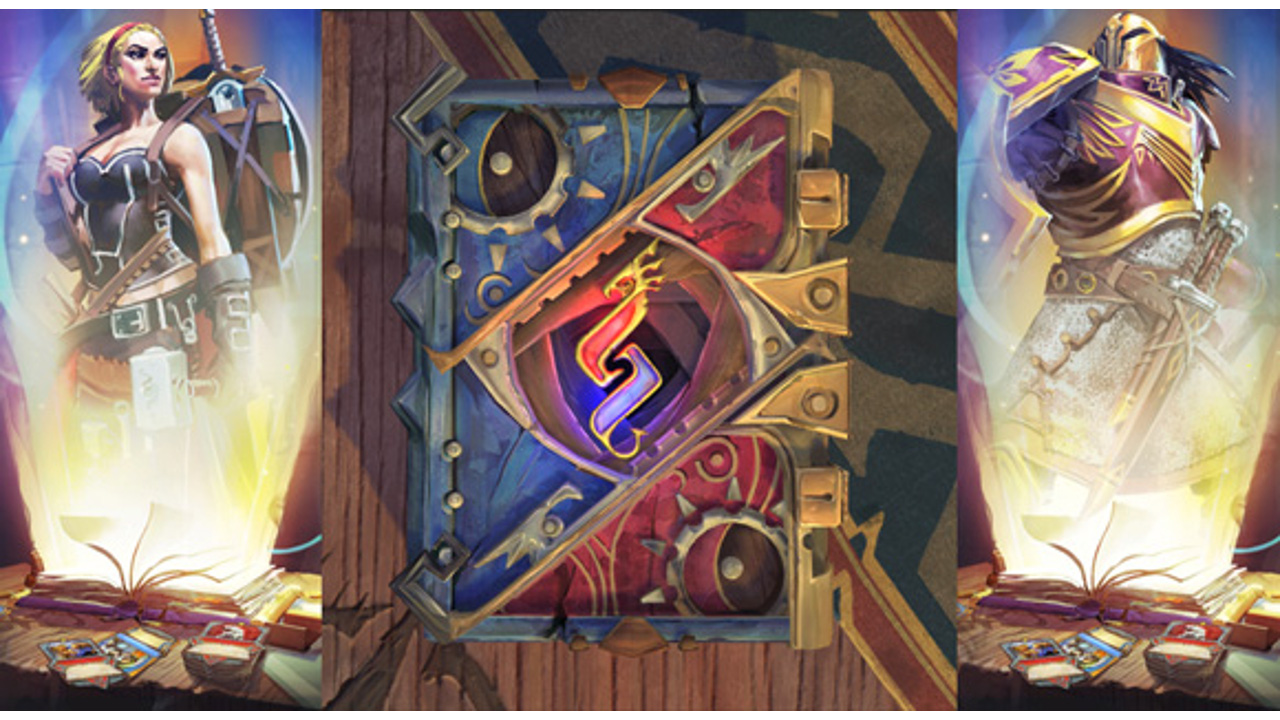 What does having PVP add to the playing field as you’re going through the game’s chapters?

PvP forms the core of the game. While your legend is completing the quest you’ve built for them, another player is doing the same thing. You also both have cards that can directly affect your opponent by doing things such as stealing their weapon or dealing damage to them. Each match consists of three rounds and at the end there is a battle to the death between the two legends, with the last person standing being the winner.

What are some of the ideas you guys are thinking about in terms of connecting this back into the MMO game experience?

We’re looking at a few ideas around this at the moment. The most likely thing is that you will be able to earn packs of cards as drops in RuneScape that you can then import into Chronicle. Another possibility is that if you’re a Runescape player, there may be things from Chronicle which you can then bring back into Runescape when you’re playing that game.  For non-Runescape players, all these elements would be optional so you can still enjoy the game the same way.

Can you talk about the platforms that it will be coming out on as well as the cross play capabilities?

The game is launching during 2015 on PC first before coming out on tablet and then mobile later on in the year.

And people can play across any platform?

Yes. So someone on an iPad could boot up the game and play against opponents on a PC or mobile phone.