Trick-or-Treat! A brief guide to Halloween 2014 in games

Halloween is this Friday. It's that time of year to don your best costume, eat copious amounts of candy, and get wrapped up in all things spooky, creepy, and chilling. For anyone that enjoys video games, it's also the time of year for many games to embrace the holiday with their own unique take on All Hallow's Eve. Many games have already kicked off this year's festivities, forgoing their usual direction for something a bit more whimsical.

Shacknews is aiming to help folks get into the spirit of Halloween by offering a helpful guide to game worlds that are diving head-first into the holiday. Many of these games have been around for years and are easy to find. They may also be sitting in your gaming library already. Either way, here are just a few games that are celebrating Halloween right now. 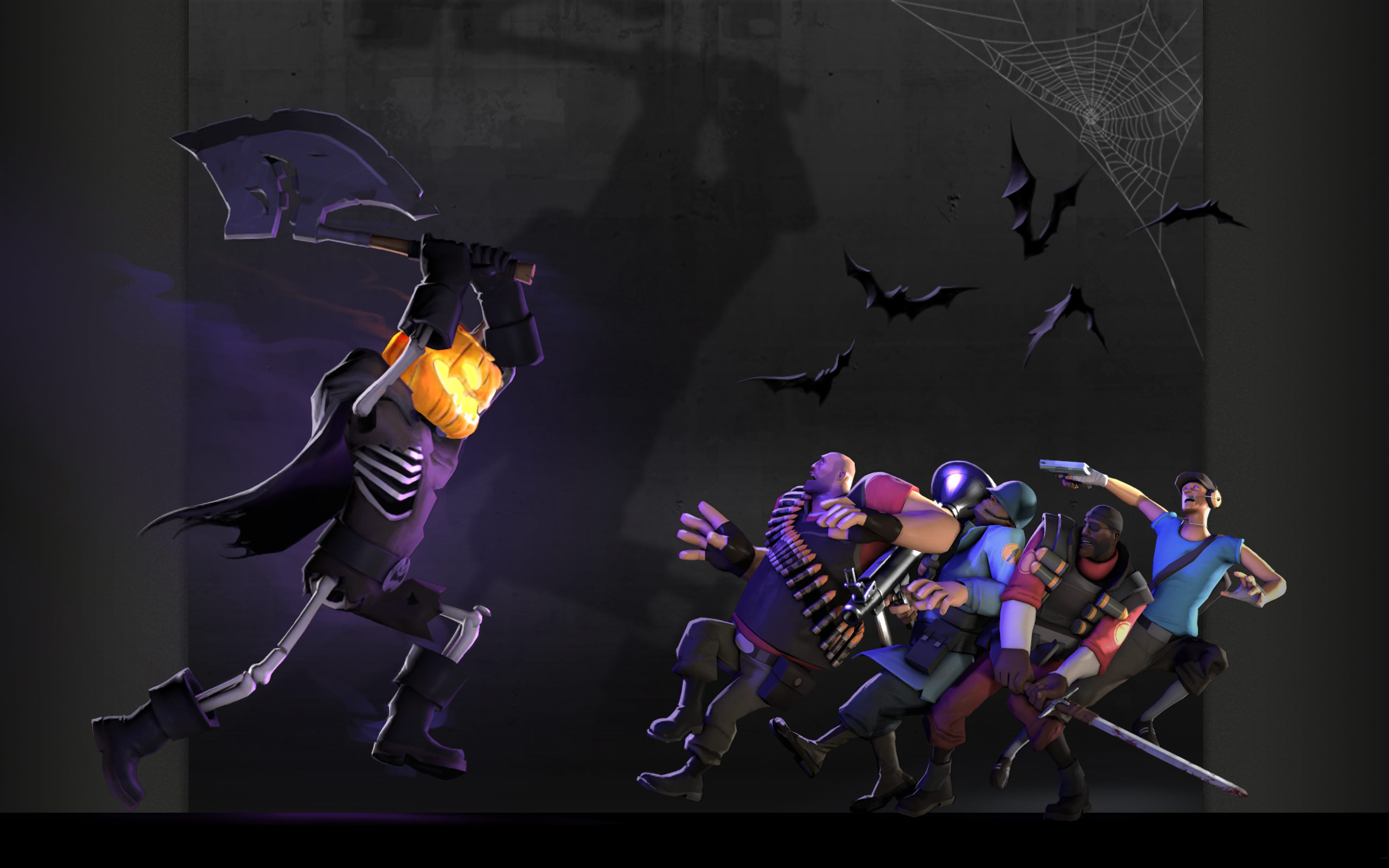 For many PC owners, nothing says "Halloween" like Valve's annual Scream Fortress event for Team Fortress 2. This year's edition of the event hasn't started quite yet, but that's not to say it isn't on its way. In fact, Valve has already activated the five past iterations of Scream Fortress to whet appetites and get people in the mood for whatever's set to strike next.

Our Team Fortress 2 timeline merely scratched the surface of Scream Fortress's history. In addition to decorating the game's world in eerie knick-knacks, Valve also made some notable additions to the game's formula. Exploding pumpkins add new hazards to each map, zombies have invaded the PvE Mann vs. Machine mode, and characters like the Horseless Headless Horsemann have previously added boss battles to the game for the first time. There's no telling what's coming this year, but given how Halloween tends to mix things up in TF2 for only a limited time, it's always worth logging in at this time of year. 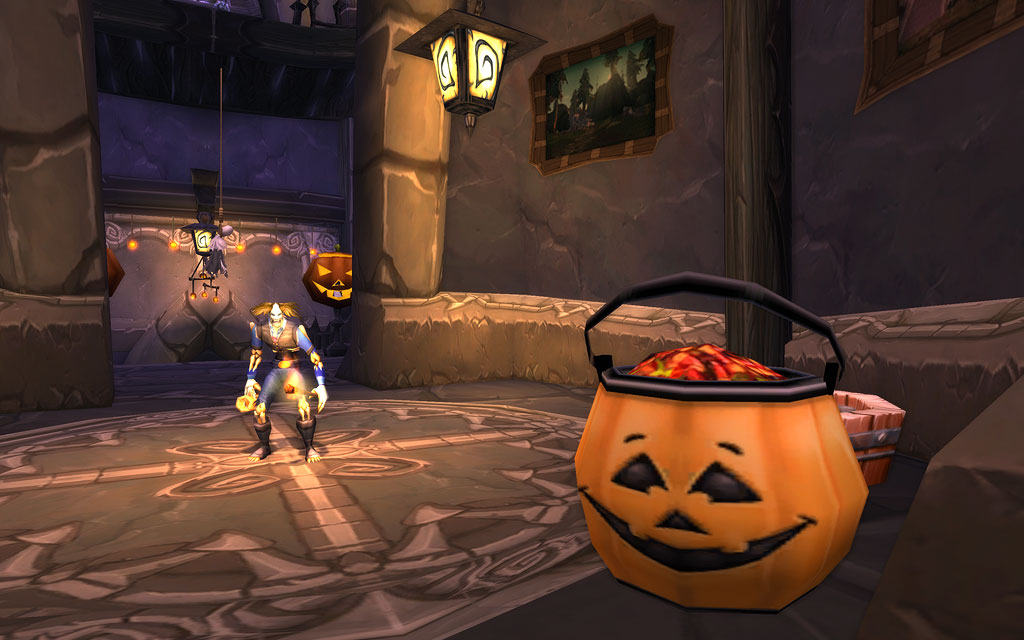 It only makes sense that one of the most popular PC games in the world celebrate the Halloween holiday. World of Warcraft is not one to be left out of the fun, having officially ushered in its annual Hallow's End event. Hallow's End celebrates the Forsaken, a group of the undead that broke free from the Lich King. To commemorate the moment they regained their free will, Azeroth celebrates by burning a ceremonial wickerman. For WoW players, it's also a chance to earn some rare Tricky Treats.

This year's Hallow's End event will add a special encounter against the Headless Horseman for any character at level 89 or above. A Loot-Filled Pumpkin, as well as a Horrific Hood and Sinister Sword, are up for grabs, but don't expect the Horseman to make it easy. Other quests can be found near the ceremonial Wickerman outside the gates of Undercity and Stormwind, most of which involve tossing stink bombs to opposing factions. Candy Buckets filled with Tricky Treats can also be found across Azeroth, while ever inn offers apple-bobbing. Rewards will include special mounts, food, bonuses, masks, and costumes.

This year's Hallow's End is running now through November 1. For more, check out Battle.net. 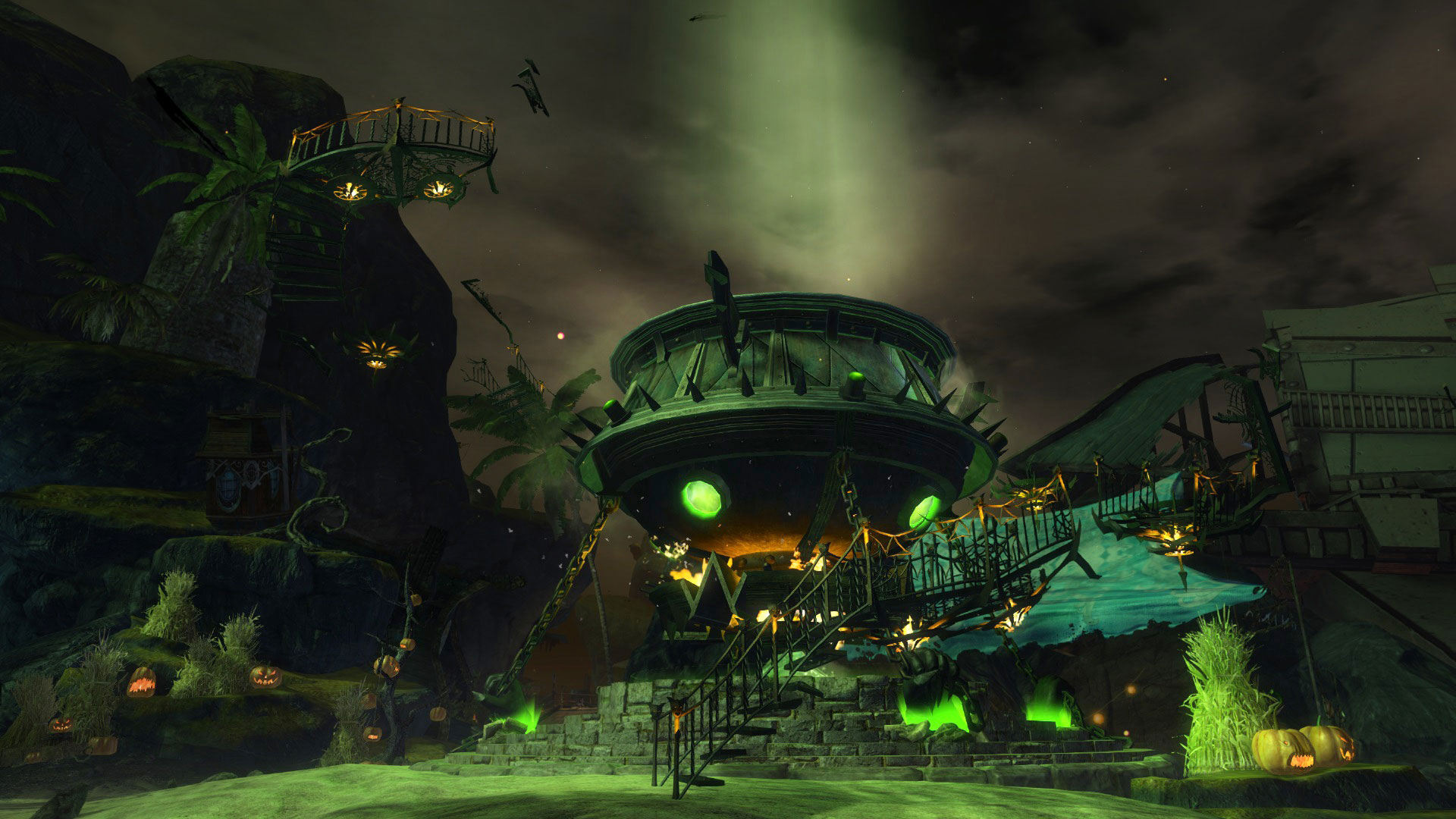 NCSoft and Arenanet likewise have some holiday shenanigans in place for their MMORPG, Guild Wars 2. The annual Blood and Madness event returns this year and as is the case every year, that means the Mad King has returned. He's not alone, though. The Mad King's son, Bloody Prince Edrick, is also back and he has a score to settle after what happened last time he was in the mortal realm.

This year, haunted doors have popped up throughout Kryta, leading to the Mad King's Realm. Beyond those doors lie armies of the undead and the forces of the Mad King and Bloody Prince doing battle along the Mad King's Labyrinth. The beloved jumping puzzles of the Mad King's Clocktower have also returned, along with the opportunity for rewards. Newer drops include Bottles of Batwing Brew, Maize Balm, new recipes, trophies, and more.

There are also two story instances to watch out for, with the latter one requiring a Mini Candy Corn Elemental for entry. There's plenty to do in this year's Blood and Madness event, which will run through the remainder of the week. For more, check out the event page and patch notes.

Superheroes celebrate Halloween, too, so it's no surprise that the Marvel Universe is ushering in the October holiday with a special event for Marvel Heroes. Avengers Tower is decked out with Halloween decorations for anyone that logs into the game to check out.

In addition to Pumpkin Credit Item Drops dropping from all enemies in the game, there are also some unique rewards in place for any group that complete a Shared Quest. Shared Quests will end with a glowing Jack O'Lantern (the pumpkin, not the supervillain) directing those players to defeat a certain boss. Defeating that boss will yield candy credit drops and other special items. There's also an all-new Halloween Mystery Bag available from the G Shop, which includes rare holiday-themed Epics and Rares, as well as a guaranteed Hero token or random costume.

For more info, check out the patch notes. If all of this sounds enticing, remember that Marvel Heroes 2015 is free-to-play. 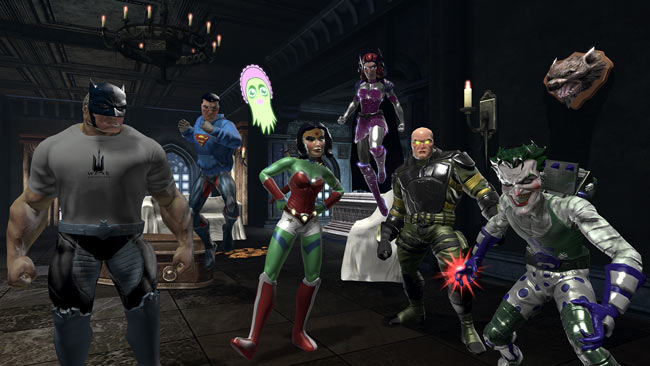 Of course, the DC Universe also celebrates Halloween, so it shouldn't come as any surprise that Sony Online Entertainment has some keen events lined up for DC Universe Online. As one might imagine, The Witching Hour brings DC's magic-based world to the forefront, spotlighting the world's magical-themed heroes and villains.

The Witching Hour sees Gotham City descend into madness. (Ok, further into madness.) There's a new quest within the Midnight Masquerade, which will see The Phantom Stranger lead in a group of Heroes and Tala lead in a group of Villains to uncover what's happening. Expect the chaos to involve the mischievous Klarion the Witch Boy, who loves to cause trouble during this time of year.

Players can find new quests to complete each day in the Mission Journal, with Spooky Bites rewards available for all of them. Skeets' Boo-tique will also offer some holiday-themed items, including new ways to decorate the recently-added Bases and League Halls. For more on Game Update 41, check out the patch notes. 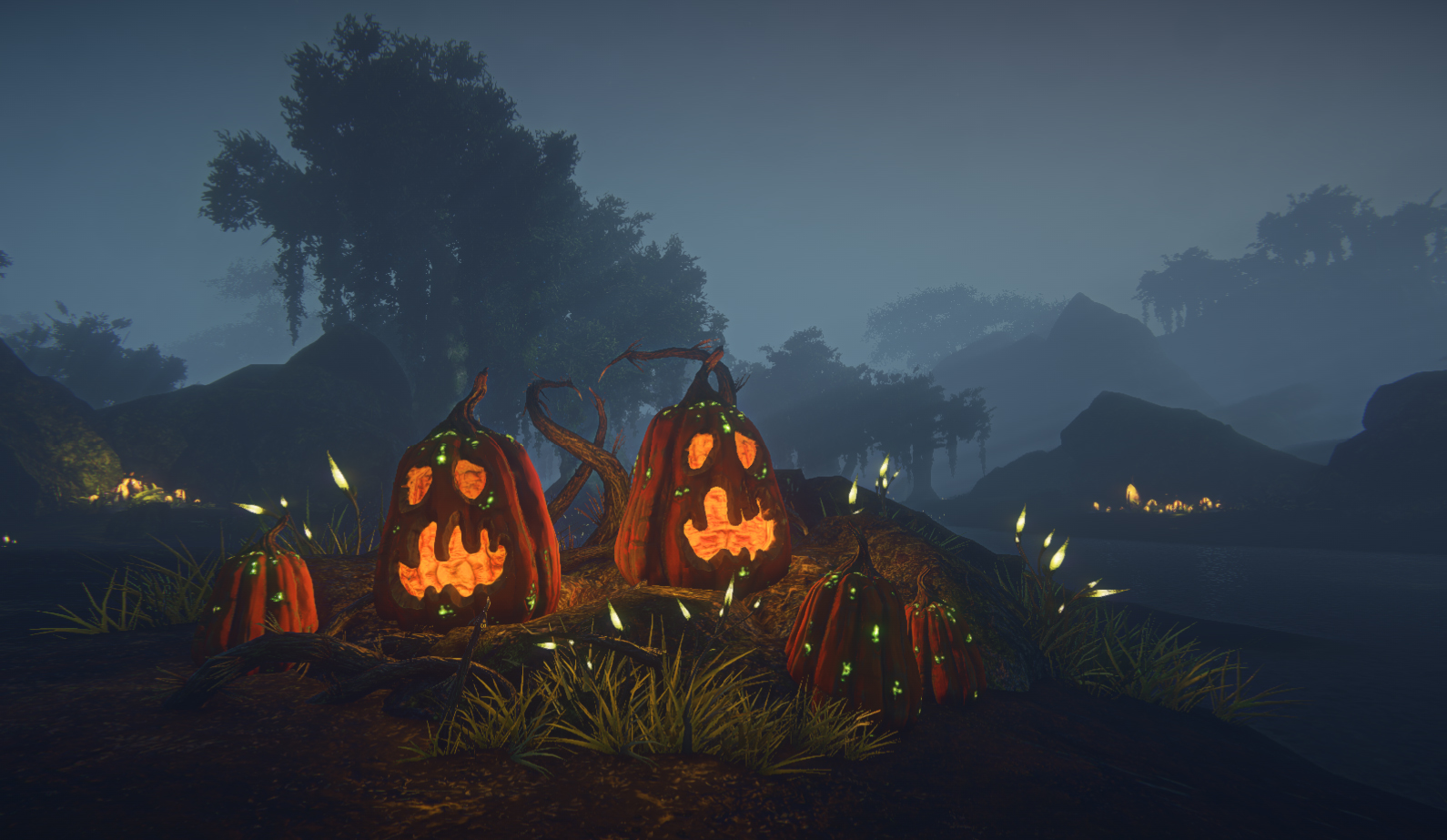 While on the topic of Sony Online Entertainment, the folks behind PlanetSide 2 did not want to be left out of the Halloween fun this year. That naturally raises the question of how Auraxis can possibly celebrate an Earth holiday. The answer? Space Pumpkins! That's the premise behind this year's Nanite of the Living Dead event.

Scientists on Auraxis created genetically-modified Space Pumpkins that have run amok across the continent. In-between bringing glory to their faction, random Pumpkin Hunt alerts will pop up in mid-game. At that point, all PlanetSide 2 players are tasked with destroying all Space Pumpkins on sight and delivering the seeds to designated Space Pumpkin Seed (SPS) drop-off zones. The alerts will trigger randomly throughout the day and players that successfully bring back an SPS will receive a holiday-themed reward. Halloween-skinned weapons are also available for purchase from the game's shop.

For more on Nanite of the Living Dead, check out the patch notes. 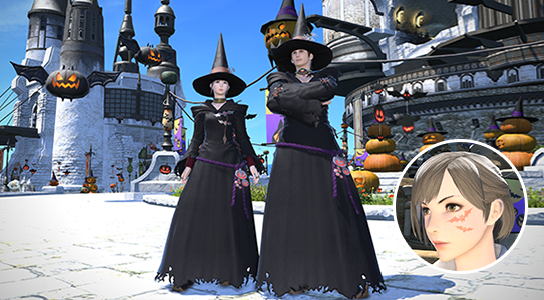 Not all Halloween events revolve arounds ghosts, goblins, pumpkins, and the like. Final Fantasy XIV: A Realm Reborn is celebrating its Halloween event with something arguably more sinister: an evil circus.

A traveling troupe called the Continental Circus is spreading the joy of All Saints' Wake. To commemorate the days in which townsfolks would dress in hideous costumes to avoid detection by the monstrous shades that wandered the streets, the Circus likewise travels the world in gothic costumes performing horror players wherever they go. This year, they plan to hold a parade on the Steps of Nald, taking volunteers and turning them into their costumes for a march down Emerald Avenue.

All this might sound a little dubious, a thought shared by Godriquelain. From the Mih Khetto's Amphitheatre, he'll send players on a quest to uncover what the Circus is really after and what secrets they're hiding. Rewards include Eerie armor and some cool-looking Pumpkin Earrings. But the Circus is acting fast, so players only have until November 3 to complete this quest. 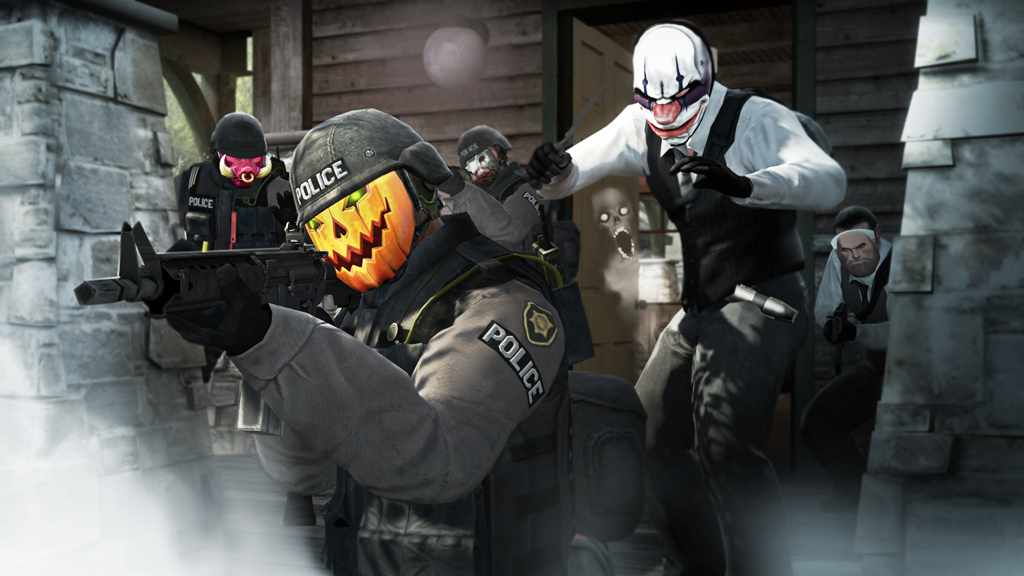 Why should all the Halloween fun be held to MMORPGs? Valve has already shown willingness to infuse the holiday into some of their other games, like the aforementioned Team Fortress 2. So now they're bringing the scary atmosphere to Counter-Strike: Global Offensive, along with a little crossover appeal.

Players will get a chance to don masks throughout each of their sessions. The masks will not only come from CS:GO, but will make their way in from TF2 and Overkill Software's Payday 2, as well. Sessions will also be haunted by the ghosts of dead players, but the scariest thing may come in the form of something truly fowl. The chickens that lurk around CS:GO are ready to take their revenge.

For more CS:GO's take on Halloween, check out the event page and release notes. 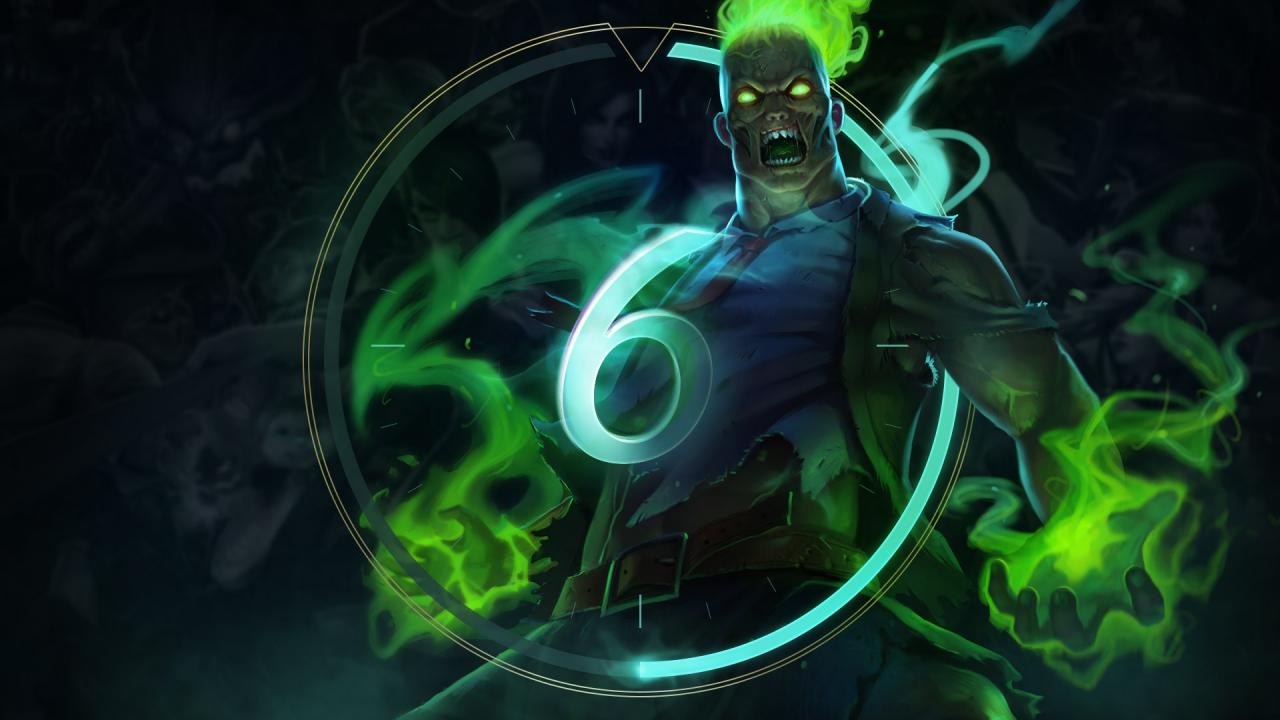 MOBAs are celebrating the Halloween holiday, too. League of Legends is ringing in The Harrowing, in which the restless spirits of the Shadow Isles haunt the hapless Champions of LoL.

Riot is offering up some holiday-themed skins for this year's edition of The Harrowing. The Ravenborn LeBlanc and Underworld Wukong skins are on sale until tomorrow and go into permanent hiatus in the Legacy Vault on November 4. The Twisted Treeline map also returns, with close quarter battles and ample opportunities to wipe out multiple opponents at a time. 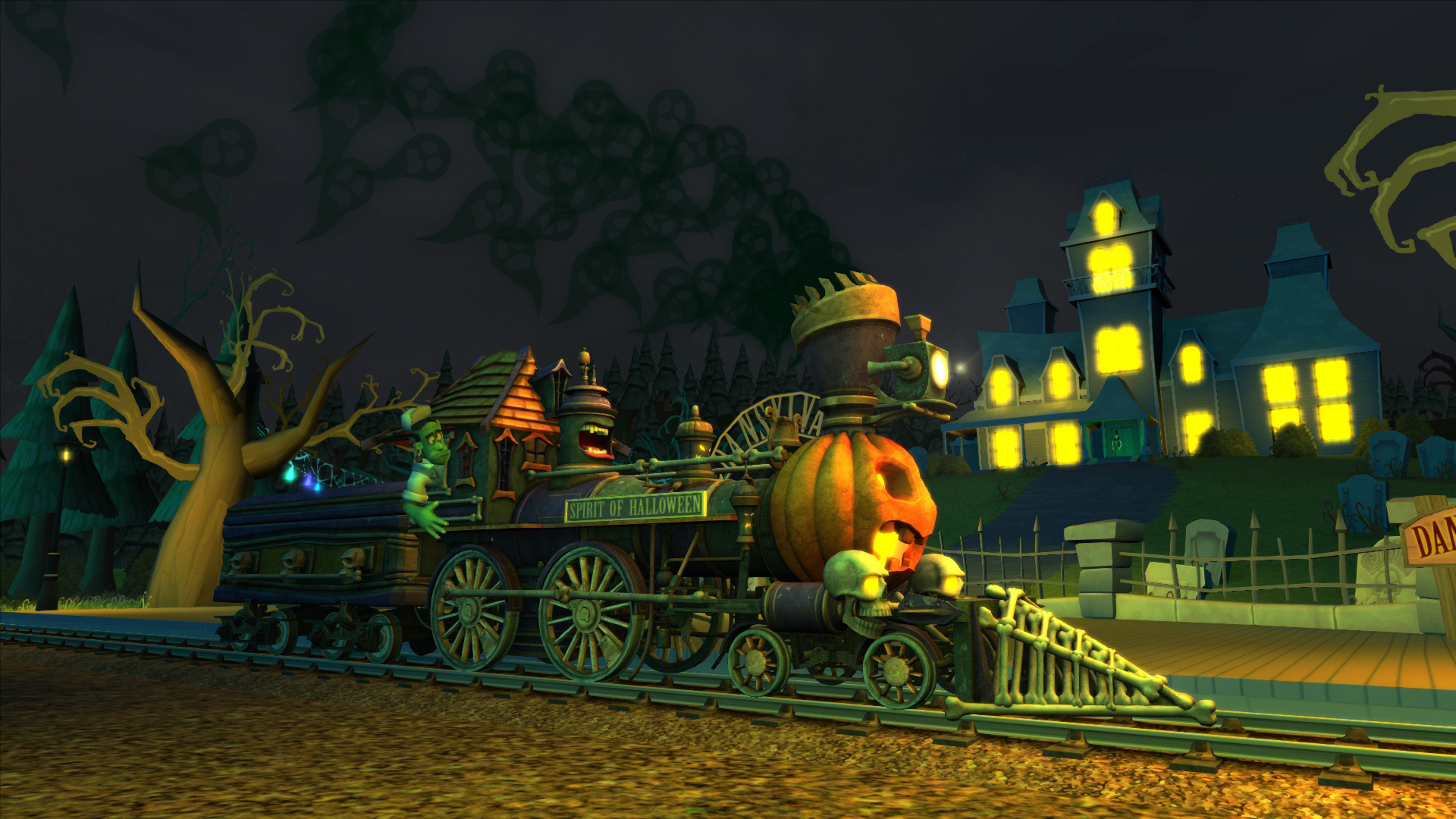 Finally, Shacknews ends this guide with a little bit of levity. After all, not everything about Halloween has to represent gaming's violent impulses. There's also opportunity to good clean spooky fun, thanks to the developers for Train Simulator 2015.

The Count of Monster Disco pack centers around taking a tour of a landscape most ghoulish. The titular Count is preparing a grand party, but requires some help from Frankie, conductor for 'The Spirit of Halloween' steam train. Players must tour the scary landscape making sure to pick up all of the Count's necessities and pick up some gruesome passengers along the way.

This unique Train Simulator take on the Halloween holiday stands out as a different way to celebrate October 31, offering up an interesting alternative to the more action-oriented content out there. The base game is not required, so give it a look over on Steam.

There are many other games seeking to celebrate Halloween this year. If there are any treats that haven't been covered above, be sure to let us know in the comments below. Happy Halloween!