Since it first released as part of The Orange Box back in 2007, Team Fortress 2 has remained a regular staple of Valve's multiplayer library. The class-based shooter has grown in a number of ways over the past seven years, but it's also proven to be one of the most influential games of this entire gaming generation.

Today, we look back at some of TF2's biggest milestones and how they changed Valve's shooter and also gaming, in general.

Fans of Team Fortress Classic were left stunned at 2006's EA Summer Showcase when Valve showed the first teaser for what would eventually become Team Fortress 2. The first game's familiar Counter Strike-like aesthetic had been tossed aside in favor of something noticeably more cartoonish.

The reception was mixed, with loyal fans unsure of what to make of the design overhaul. Little did they know what Valve would unleash in the next year.

Valve released The Orange Box in October 2007 and it would prove to be one of the company's biggest releases ever. While it started a stagnation of the Half-Life franchise that continues to this day, it also kicked off two of the most beloved franchises of the last ten years: Portal and Team Fortress 2, the latter of which stepped out of the shadow of its predecessor and became a juggernaut all its own.

With only six maps initially released, players would select between the Heavy, Medic, Demoman, Engineer, Sniper, Pyro, Scout, Soldier, and Spy and do battle in various objective-based game modes. It featured some memorable map layouts, such as the now-iconic 2Fort, and some novel new features, like the Nemesis system.

But Team Fortress 2 rapidly became known for its Source-based animation style that would take expressive character models that would normally be reserved for cinematics and cutscenes and actually insert them into full-blown deathmatches. It was unlike anything seen to that point and this injected personality would be a major factor into why TF2 persists as a major force in gaming seven years later.

Roughly six months after The Orange Box first released, Team Fortress 2 unveiled its first major content update. In addition to adding a new game mode called Payload (in which the mercs must escort a bomb to its target) and a new map called Gold Rush, the Medic received a whole new batch of weapons. This began TF2's individual class updates and formally mark an end to vanilla TF2 on PC.

The Medic's new weapons included the Blutsauger, the Kritzkrieg (replacing uber charges with crit charges), and the Ubersaw. All the weapons would feature buffs and drawbacks, offer a small taste of what would come in the future. Over the course of the next couple of years, all of TF2's classes would receive similar updates with weapons of their own. It would add a whole new degree of variety to Valve's shooter.

Shortly after the release of the Meet the Sniper video, Valve decided to toss in a cheeky reference as a fun April Fools Day prank. Pointing to the number of urine-filled jars the Sniper fills up during the video, Valve jokingly introduced Jarate, the jar-based karate! The idea was that the Sniper would toss these jars of yellow liquid at his opponents, covering them in odorous humiliation. It was quite a funny joke for the folks at Valve.

TF2's player base didn't consider it so much a joke. In fact, they quickly started rumbling for the Jarate reveal to be real.

Valve was clearly caught off-guard by this bizarre demand for urinary weaponry, but the developer quickly pulled itself together. On May 21, 2009, Jarate was officially released as part of the Sniper vs. Spy Update. Not only did it fulfill the fanbase's 'number one' desire, but it also added mini-crits to the game for the first time.

This would mark one of the earliest instances of an April Fools update starting out as a joke, but quickly coming to pass. It's an idea that other game developers would adopt, with Bohemia Interactive's Arma 3 'Karts' DLC being the most recent example. The ball first got rolling with the Sniper's Jarate, but that wouldn't be the only thing Valve would introduce on this day in May. 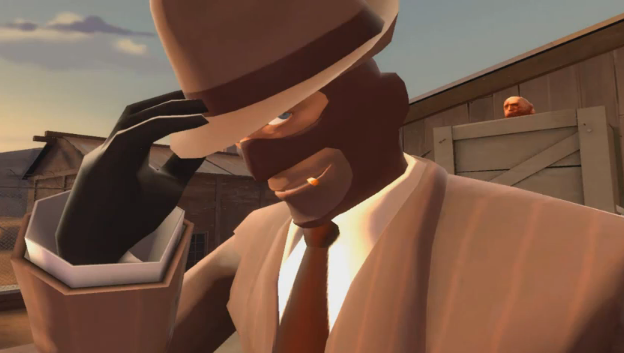 In addition to new Sniper and Spy weapons, the Sniper vs. Spy Update brought a little something extra to Team Fortress 2. Valve concluded that while blowing up opponents is fun, blowing up opponents while wearing a cool hat would be even more fun. With that, hats were introduced for the first time.

The first batch of hats included the Batter's Helmet (Scout), Soldier's Stash (Soldier), Pyro's Beanie (Pyro), Demoman's Fro (Demoman), Football Helmet (Heavy), Mining Light (Engineer), Prussian Pickelhaube (Medic), Trophy Belt (Sniper), and Fancy Fedora (Spy). It would be far from the last one, because the cosmetic add-ons proved to be a major hit. In the five years since hats were introduced, over 500 cosmetic items have been added to Team Fortress 2, with more still on the way. It opened the door to a bustling trade market, with trading also making its debut on this day.

Valve later got the ball rolling on promotional hats by adding Bill's Hat from Left 4 Dead on November 9, 2012. It would be a promotional tactic that a number of future game releases would adopt, with TF2 players able to pick up special hats from games like BioShock Infinite, Sleeping Dogs, Deus Ex: Human Revolution, Killing Floor, Poker Night, and many more.

A genie had been unleashed and it's one that cannot be put back in its bottle, as Valve had officially kicked off the age of cosmetic DLC. Numerous publishers and developers would adopt this model, offering cosmetic knick-knacks for a small fee in what would eventually become the modern day free-to-play business model. As for TF2, with demand for hats growing by the day, Valve would soon need to figure out a way to satisfy the cry for more hats. A temporary solution would be provided later that year.

2009 would be the year that Valve got into the Halloween spirit with Team Fortress 2. This would be the first year that the mercs would celebrate the occasion with special Halloween-themed maps that would only be active for a limited time.

The festivities kicked off with the Terrifying Team Fortress Haunted Hallowe'en Special, which opened up a special King of the Hill map called Harvest. The idea would be to capture and hold a central control point, but there would be some Halloween-themed obstacles placed throughout the map. Pumpkins would explode on contact and cause severe damage to anyone in their vicinity. Ghosts would also haunt the map, scaring surrounding victims into briefly putting down their weapons in fear. It was a fun variant of the traditional TF2 gameplay and one that caught on with fans quickly.

The Halloween updates grew so popular that they would return as an annual event. Valve would have new tricks and treats to trot out each year, including new hats, masks, and even stage bosses. Other games quickly began to follow suit with their own Halloween and Christmas-themed events, but few can hold a candle to Valve's annual party favors. Even those that have gradually drifted from TF2 will schedule time to come back for one more crack at the Halloween maps, not wanting to miss the holiday tradition. 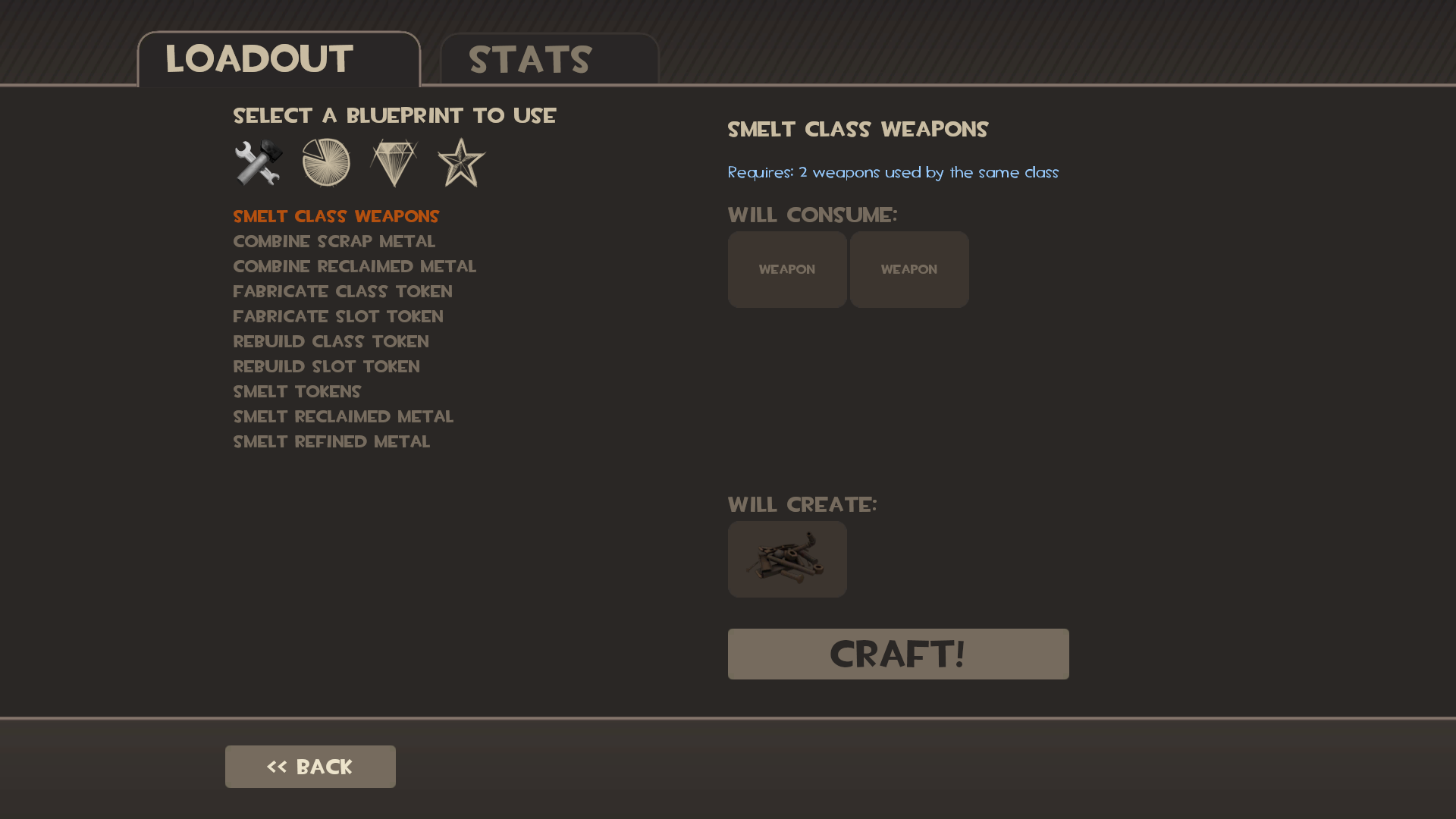 Team Fortress 2 was dangerously close to becoming a game of "haves and have-nots." It wasn't just hats that was the issue, but many players had played hundreds of hours without receiving the weapon drop they were looking for. Since trade servers weren't proving of much use to these people, either, Valve needed a solution. So they came up with a new crafting system.

The WAR! Update introduced special metals that could be created with excess weapons and items that were no longer being used. Aside from offering a formal sense of currency (with items measured in terms of Refined Metal), this system allowed unlucky users to put together all of their useless junk and craft the specific weapon they were looking for through unique recipes. Hats could similarly be crafted through this system, though they'd always be crafted at random. So even if a player had dozens of Refined Metals, there was no guaranteeing the result would be anything other than multiple repeats.

The system wasn't perfect, but it was certainly a good place to start. And Valve's crafting would prove to be a major influence on future game developers that would adopt similar principles for their own crafting systems.

Stick around later today as we look through the rest of Team Fortress 2's big milestones, including its jump to free-to-play, its booming economy, and its contribution to the world of machinima.