A lot of attention is focused on Super Smash Bros. for Wii U, as owners of Nintendo's console anxiously await their chance to pick up their GameCube controllers once more. However, there's another Smash Bros. coming up first and that's the handheld Super Smash Bros. for 3DS. Unlike its console big brother, the 3DS version of Smash Bros. will feature an extra game mode: Smash Run. To see how it played, I took a moment to go hands-on with it during this year's San Diego Comic-Con.

Smash Run is the 3DS-exclusive game mode that sees players running through a course filled with enemies from across each fighter's respective world. The idea is to run the gauntlet and defeat enemies, collecting stickers to help bolster their stats for an eventual two-minute Melee battle. As players make their Smash Run, they can see the progress the other players are making on the bottom screen and will receive alerts if any of their opponents have been KO'd. 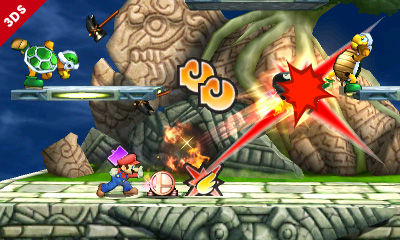 While the course designs feel uninspired, the combat is a novelty throwback to some of the sequences from Smash Bros. Melee's Adventure mode and Brawl's Subspace Emissary. The difference is that a lot of these enemies feel slightly more skilled than before. For example, Kid Icarus' Reaper will hit hard with his sickle, while Kremlings will unleash tornado punches and Mega Man's helmetted Met foes will hide underneath their hard hats waiting for an opening to attack. Enemies can be found sprinkled across the course or in designated Battlefield areas that can be found in certain locations.

Even though there's nothing particularly special about the way courses are designed, there are some hidden surprises to be found, such as treasure chests containing special trophies and extra power-ups. They're often worth hunting down and adds some much-needed variety, because the adventure's five minutes can feel somewhat draining.

After the five minutes are up, it's time to go into the special melee mode. Each of the four fighters are beefed up with the power-ups they collected over the course of the Smash Run, leading to some especially hard hits over the course of the next two minutes. KOs come frequently, thanks to additional attack power and speed stats and it's pretty fun to play through. Unfortunately, the two minutes feel like they breeze by all-too-quickly, especially compared to the five-minute preparation warm-up phase. 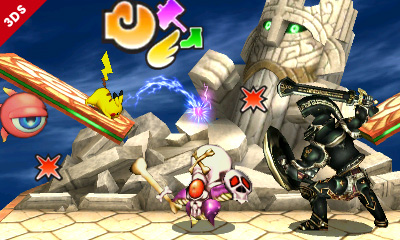 On a slight tangent, there's one very important aspect of Smash Bros. that may bother long-time veterans of the series. I've always been the type of player that's relied on the 'C-sticking' tactic to carry me through matches, but the 3DS clearly does not have a second analog stick option, meaning quick sweeps and the like must be executed manually with the Circle Pad. This absence especially hurts during the course of Smash Run, because I was left with a "phantom limb" feeling every time I tried to reach for a second analog stick for crowd control.

Smash Run in its current state doesn't quite feel like a perfect replacement for a formal campaign. However, taking out lesser enemies is still a good introduction to the ins-and-outs of Smash Bros. combat. The length may feel a bit off-putting, but it should serve as a good distraction from the main four-player combat that Smash Bros. has to offer.