Danger awaits those that dare set foot inside Castle Shadowgate, but the fate of the world is at stake. Old-school PC and NES users are familiar with the classic adventure game, Shadowgate, and there's still an air of fondness that hovers over it. That's why original creators Karl Roelofs and Dave Marsh banded together to create a new studio called Zojoi to revive the classic game for a new generation. After raising over $137,000 on Kickstarter, Shadowgate is nearly ready for release and it looks to preserve everything that made the original game so beloved.

Shadowgate retains just about everything about the classic graphic adventure game formula. Players are given a set of commands (Look, Use, Hit, Open, Speak, etc.) and are able to interact with just about anything in the world. The idea is to explore the vast interior of the castle, eventually finding your way to the evil Warlock Lord. Castle Shadowgate is a veritable labyrinth, with only Yorick the Skull to guide you through. Time passes with each turn, adding a sense of urgency to the proceedings, yet there are many rooms to sift through, each with their own unique collectible treasures and dangers.

One example of the dangerous rooms on display is the classic treasure room from the original Shadowgate. A dragon slumbers in the far end of the chamber, requiring the player to pick up the shield in the middle of the room. Taking additional turns offers a chance to pick up ample amounts of treasure, but the dragon will react with each turn and wear down the shield with each breath. If the shield falls apart, the dragon can simply sear the flesh off your bones at the end of the next turn. The feel is reminiscent of a 'Dungeons & Dragons' style of adventure and a delightfully retro aesthetic that fits in well with the game's updated hand-drawn art style. 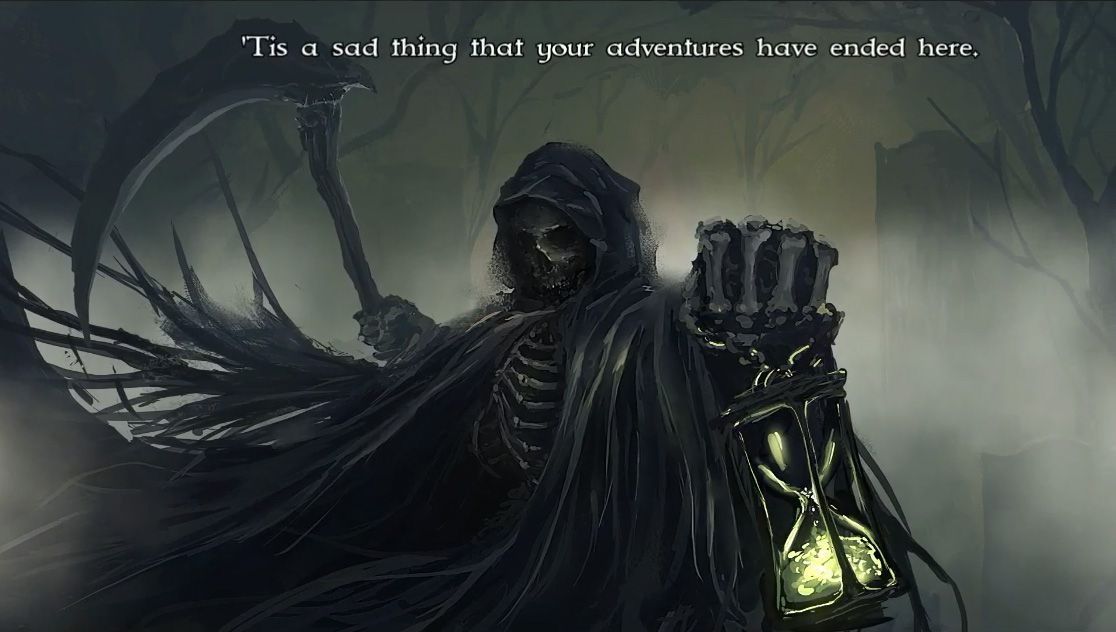 Though Shadowgate veers for a classic atmosphere, Zojoi is adding some modern control mechanics into the mix, as well. Players can interact or use items with double-clicks. They can set UI shortcuts, such as binding 'Use' and an item to a single hot key assignment. They can also look back at previous moves, by expanding the text window on the bottom of the screen. Autosave will function in certain rooms (depending on the game's difficulty), but there's also a Quick Save function and multiple save slots available for use. These sound like minor additions, but they mean a lot in the near-20 years since the original Shadowgate released, adding just enough of a modern touch without compromising the game's graphic adventure atmosphere.

And indeed, Shadowgate's creators haven't forgotten what makes a classic adventure. Events will pop up with every turn and proceed in a logical progression. Walking towards a rickety bridge will logically see it break underneath your feet. Heading down a hall can lead to an ambush by goblins. Speaking to a character inside a dungeon chamber will unfold with modernized voice-over dialogue, but end with an old-school metamorphosis into a hideous beast. The result is something simple in design, yet delightfully immersive.

Shadowgate also promises to include a number of hidden goodies, namely in the form of hidden deaths. Triggering certain events will unlock a special animation sequence, sending your character to a particularly unique demise. The narrator will then issue a congratulations for finding one of the game's hidden deaths. For example, Roelofs walked through a chamber of mirrors. In breaking one of them, a cutscene played out showing the main character getting sucked into a dark vortex. Standard deaths linger around every corner, but these different death paths offer a certain sense of fanfare and should be worth tracking down.

The puzzles will also change, depending on the game's difficulty level. Upping your difficulty to 'Master' will create harder puzzles and offer less hints, leaving Yorick as little more than comedy relief. On the other side, sticking to 'Apprentice' will ease up on the complexity of the puzzles, while Yorick will offer more valuable advice on how to proceed.

While Shadowgate does offer an old-school experience with modern visuals and an epic orchestral theme (that can be customized through a special music room within the castle), there's also something for those feeling truly nostalgic. Options include a Retro Mode, in which music, text, and graphics can all be set to resemble Shadowgate's 1989 NES counterpart, right down to the original death screen. Any mix of these options can be used, allowing users to play through the beautiful hand-drawn stages with the classic 8-bit NES chiptunes playing in the background.

Shadowgate appears to be pure nostalgia in the best way, continuing a trend for 80s-era adventure revivals. It's game that Roelofs hopes will find success, because he adds that this could only be the beginning for the Shadowgate renaissance. Player interest and positive sales could potentially pave the way for a Beyond Shadowgate revival and may even lead to Shadowgate Rising, a game that was planned but never released.

Shadowgate will release on PC and Mac in mid-August, with iOS and Android ports expected to come soon after. Those that contributed to the Kickstarter campaign should expect to receive the game about a week before its official public release.