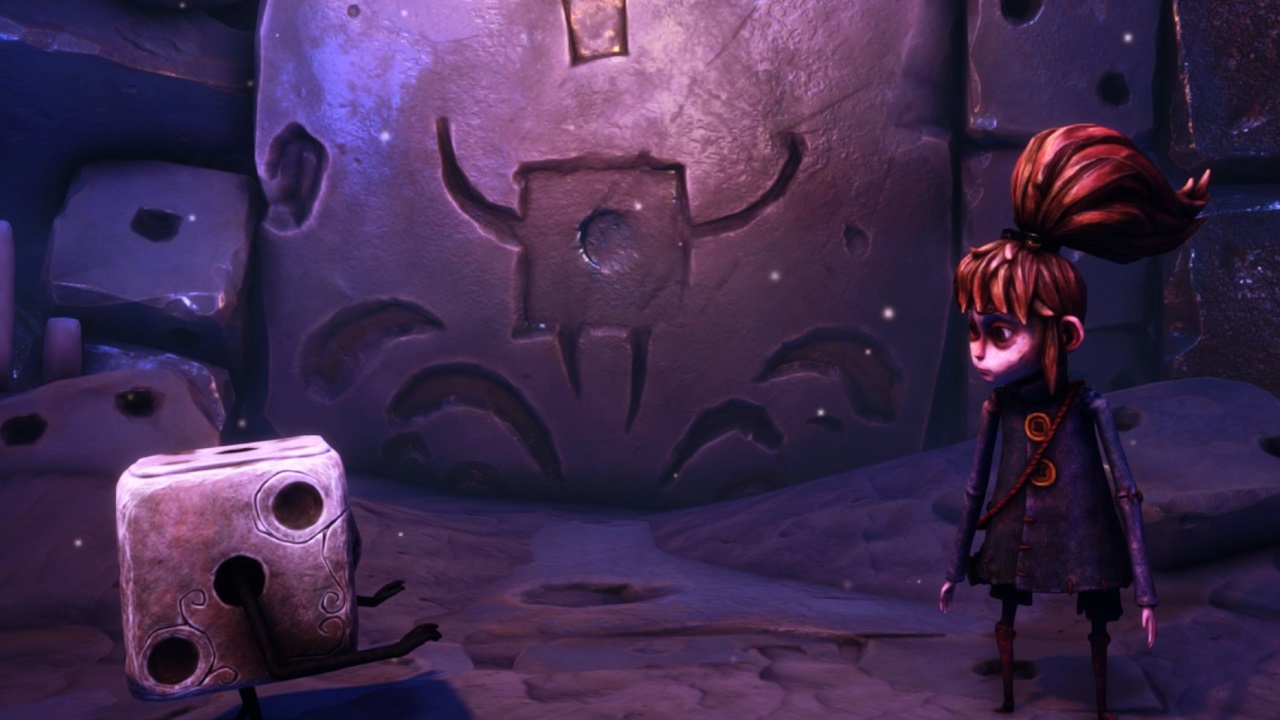 What if all things were subject to a roll of the dice? What if the only things that stood between catastrophe and fortune were a one-to-six pipped roll? What if, despite what chance said, you refused to simply accept the outcome? Lost in Random is a grim, yet magical world. It’s a world controlled by sorcery imbued into chance, and the journey through it is a visual, musical, interactive, and narrative spectacle. However, it's also dulled by some unfortunate limitations and cracks at the seams of the overall experience.

A world of dice magic & yet only one dice

Lost in Random tells the story of a world ruled over by an all-powerful and tyrannical Queen. In this world, dice have magic and life to them, but the queen supposedly destroyed all dice but the one in her control - a powerful black dice. It’s a world of settlements based upon one of the six sides of a dice with Onecroft being the lowest rung of society, inhabited by the poor and penniless while Sixtopia is a top-rung paradise. It’s in this world that "Oner" sisters Even and Odd try to make the best of a bad hand, but not for long.

There’s a ritual in Onecroft. When a child turns 12 years old, the Queen visits to meet them. She then rolls her dice and the result decides which land of the society that child will be sent to. Odd’s 12th birthday comes up in the game's opening chapters and despite her desire to stay with her family and sister, a troubling twist of fate turns the dice to a six, allowing the Queen to take her away to a supposed highlife. A year later, the loss haunts Even. She feels Odd was stolen from her and, moreover, the appearance of strange dreams and a ghost convince Even that all is not happily-ever-after and Odd needs her help.

As Even sets out on an adventure to discover the fate of her sister, it doesn’t take her long to discover a surviving dice with power comparable to the Queen’s. Suitably named Dicey, the dice joins Even in her cause and Even finds Dicey can help her not only fight the Queen’s minions, but also change the fate of entire lands under her control. For instance, Two-Town is a place in which each denizen has a split personality and the Queen’s dice roll each morning decides which personality is dominant for the day. Meanwhile, in Threedom, a royal family of three siblings is at odds because their father was killed, they blamed each other, and started a war over it. The Queen supplied them with towering robots to do battle and each day rolls her dice to decide which one gets to attack and gain advantage over the other two.

Lost in Random is a mesmerizing world that is as macabre as it is gorgeous and quirky. Each land you visit has a beating heart all its own in its themes and moods, delivered by the citizenry that live there and occasionally task Even with their woes. Everything from the enviroment to the characters looks like it was crafted of various mixes of clay, paper, vinyl, and fabric. The humans you meet are mostly dingy and creatures that live alongside them look like fairies and monsters ripped from the very pages of nightmarish European folklore and cautionary tales. The game has a fairly gorgeous and whimsical orchestral soundtrack to go with it too. Moreover, much of it is voiced by a good cast, with the game’s progression often accompanied by a reliable, if not often cheeky, narrator. For all the bleakness in this game, there’s also a decent and balanced sense of humor that reminds me of things like James & the Giant Peach or Adventure Time. Apt since former Adventure Time writer Ryan North was the lead writer here.

Lost in Random goes quite far in winning my heart for its soundtrack, voice acting, narrative, and visual design, but it often feels like there’s budgetary jank behind a lot of it. There will be cuts where the music just jerks to another track out of a scene you finished or you’ll look at the character animations and see their lips are barely synced to their words. You might start a dialogue and Even will be facing away or the camera will pop from the angle of a cutscene to back behind Even before a proper transition is finished. Heck, later in the game, I noticed there were a few minor characters (mostly children) that just seemed to be straight-up reused models. The world is so very bizarre and full of interesting characters with stories worth hearing, but there’s missing bits of polish here and there that were just a bit too noticeable in the periphery of a game that otherwise gives me vibes of something like Nightmare Before Christmas or Coraline.

Cast the dice, change your fate

Throughout the game, Even must utilize her partnership with Dicey to battle against the Queen’s minions, mostly robots animated through her dark dice’s magic. The way in which this works is that Even must break crystals on the robots or in the environment that drop Dice Energy. This allows Even to draw up to five cards from a 15-card deck and then she can throw Dicey for a roll. Each card has a cost and the number that shows up on Dicey’s roll is how much overall you can spend on playing cards. A simple card that lets you equip a sword only costs a roll of one, but if you roll a three, you can use a card that lets you equip a hefty club for three energy or use that sword card and a two-cost bomb card that can be deployed in the arena like a trap.

It’s realtime combat with dodges, projectiles, and melee attacks, but when you throw Dicey, time slows for you to choose and deploy your cards, allowing you to be strategic with how you place action cards like traps before you start the action back up. You start out with only a handful of cards and Dicey can only roll up to a two at first, but the more the game progresses, the more pips you get for Dicey (allowing him to roll higher rolls) and the more cards you get with new and interesting effects to mix into your deck. I really built some fun decks, such as one combo in which I’d lay bombs and then send a ghost that could both stun enemies for a moment and trigger the bomb while I’d duck out of the way. I’d certainly say some cards are better than others, but there’s a lot of experimentation and combinations you can explore.

Most battles involve just defeating waves of various combinations of enemies ranging from knights with swords, spears, clubs, and guns to bird and spider bots that are easy to kill, but hard to hit without a bow or a patient counterattack. There are also gameboard battles in which you must roll Dicey to move a game piece forward that many spaces on the gameboard playing field with the goal of getting to the finishing space. Effect spaces line the move path, such as having to kill certain enemies before the game piece can be rolled to move or landing on a space where the game piece deploys a barrier for Even to use.

As fun as all this is, I felt some amount of limitation in both cards and enemies. Well before the final chapter and battles, I had collected every card the game had for me, despite continuing to give me money to buy more duplicate cards or earn them in side quests. Similarly, while combat and forming your strategy is mostly exciting throughout the game, there’s a point at which it doesn’t introduce any new threats anymore and you’re just facing various combos of the same enemies in the numerous non-boss battles. It's a fairly creative system, but it feels like it loses steam well before the credits roll.

Ultimately, I think what Lost in Random reminds me of most is American McGee’s early Alice games, but less brutal and more whimsical. It’s got a similar form of macabre about its world and narrative, but it also has a similar limitation and technical tarnish that those games had. Even and Dicey’s Journey to save Odd and stop the Queen is well written and presented by the game’s action, music, and narrative, but it feels like there’s also varying degrees of jank just sitting in your periphery. Get past that, and I still feel this is a fairy-tale adventure that deserves a cover-to-cover read.

This review is based on a PC digital copy supplied by the publisher. Lost in Random launches in September 10, 2021 on PS4, PS5, Xbox One, Xbox Series X/S, Nintendo Switch, and PC via EA Origin.