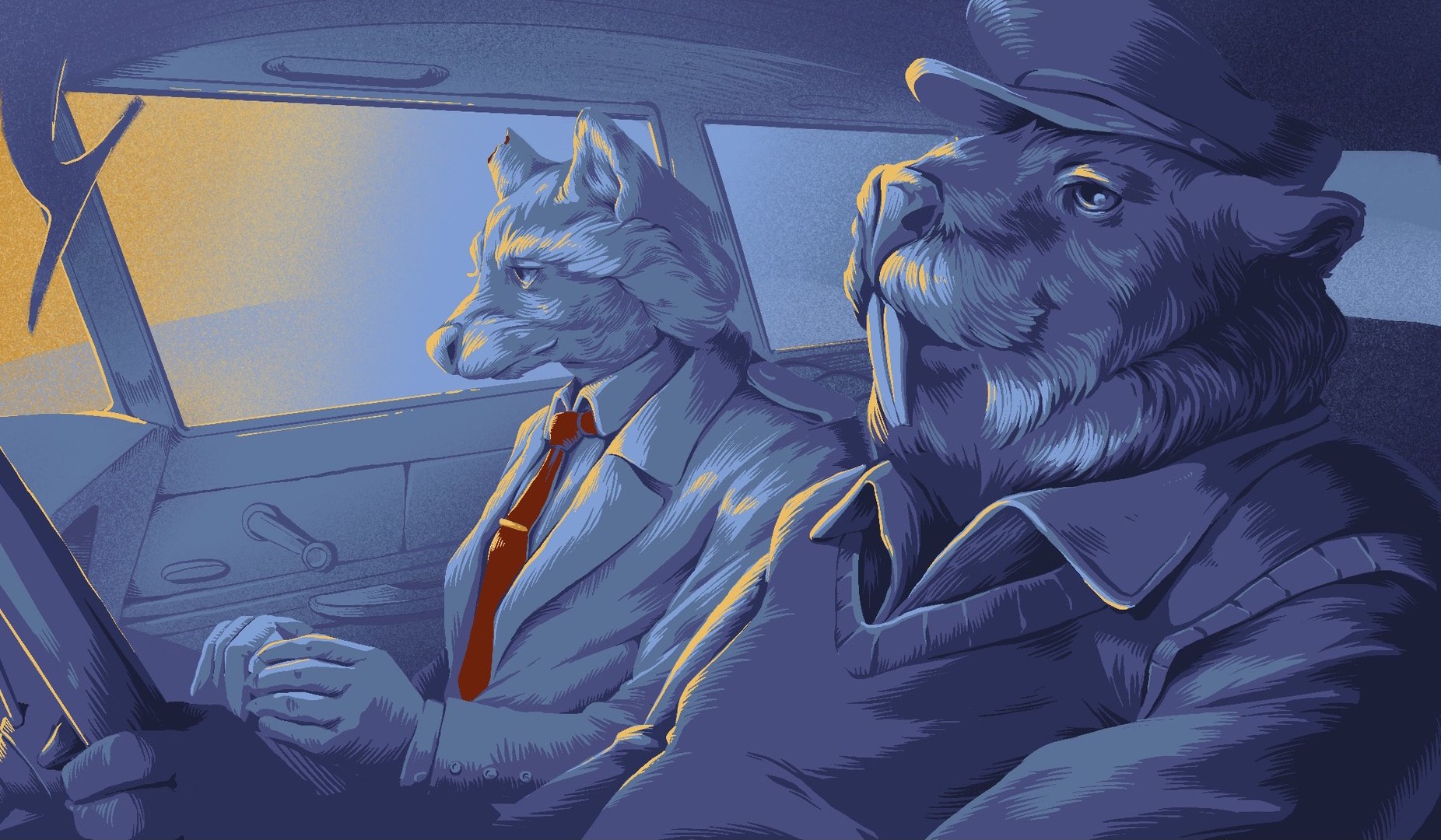 On paper, EggNut’s neo-noir mystery adventure Backbone has all the boxes ticked: fantastic art, outstanding music, and the promise of a compelling story. In practice, the components never quite mesh into a cohesive package. The first half of the game sets a tone that the back half cannot maintain and may ultimately leave some frustrated. Still, the individual parts here are probably worth a closer look, even if they fail to make up a solid whole.

Backbone presents the familiar noir detective adventure against the backdrop of an alternate reality Vancouver, British Columbia. The denizens of the city are anthropomorphic critters of all types. The various species are fill-ins for the divided classes of this dark, wet town. Howard Lotor serves as the protagonist of this tale, a raccoon private investigator with a tan trench coat and a trunk full of existential baggage.

The game opens with Howard accepting a job from a concerned squirrel who has not seen her husband, Jeremy. He hits the streets, checking in with old acquaintances and collecting clues from anyone willing to divulge information. Players will guide Howard as he sneaks into a jazz club and discovers the ultimate fate of Jeremy in the bowels of the club. While the immediate case is solved, it brings along all-new questions about how Jeremy ended up in the club and about the unseen forces that control the city.

Divided across five acts, Backbone offers the promise of classic mystery adventure gameplay with dialogue choices that should have a real effect on the story. It mostly delivers on this promise in the early going, but once players clear the second act, the overall pace, and presentation become very linear to the point that it resembles a visual novel more than a conventional point-and-click adventure. There are also some odd narrative twists that are likely to leave many players scratching their heads.

The overall experience is short in total length, but the latter half still manages to overstay its welcome. It feels like a decision was made to rush to completion or there was possibly a choice to change direction from the original design plan. Individual characters seemingly make arbitrary choices and Howard himself often treads water rather than experiencing progress as a raccoon person. It is frustrating working through Backbone because the premise and early sections hold promise that a compelling adventure could be hiding somewhere in the dark alleys of noir zoo Vancouver.

Gameplay and narrative issues aside, Backbone looks and sounds like a million bucks. The pixel art rendition of Vancouver and its critter inhabitants never fails to impress. I was constantly noticing small details in city streets or simple animations that helped the random NPCs feel like they were a part of a living world. Unsurprisingly, it rains a lot in Backbone and the weather effects are top-notch, with the precipitation and hazy volumetrics working to build a believable place. Pixel art junkies are going to have a good time strolling around Backbone.

As good as the art is, I felt that the soundtrack was the real star of Backbone. Produced by Danshin and Arroj Aftab, this collection of tracks is outstanding from start to finish. Tossing some jazz into a noir detective tale is about as cliche as it gets, but you won’t find me complaining about what we get from Backbone. Most of the compositions are somber with downtempo-esque percussion and help to infuse the proceedings with life. Occasional departures into abrasive tones and beats are perfectly sewn into the game.  More than once I found myself standing still in-game just so I could wallow in the vibe created from the pixel art and music.

I am disappointed by the mixed feelings I get from Backbone. It is absolutely worth a look solely on the merits of its audiovisual presentation, but its attempt to offer commentary or insight into the topics its narrative broaches repeatedly fall flat, particularly in the latter half. EggNut clearly has the goods in the art and music departments, so I would love to see what they can do with a stronger narrative in the future. If you do choose to give Backbone a shot, make sure to get the Artifact Edition, as it includes the wonderful soundtrack. 6/10 otters in 3-piece suits