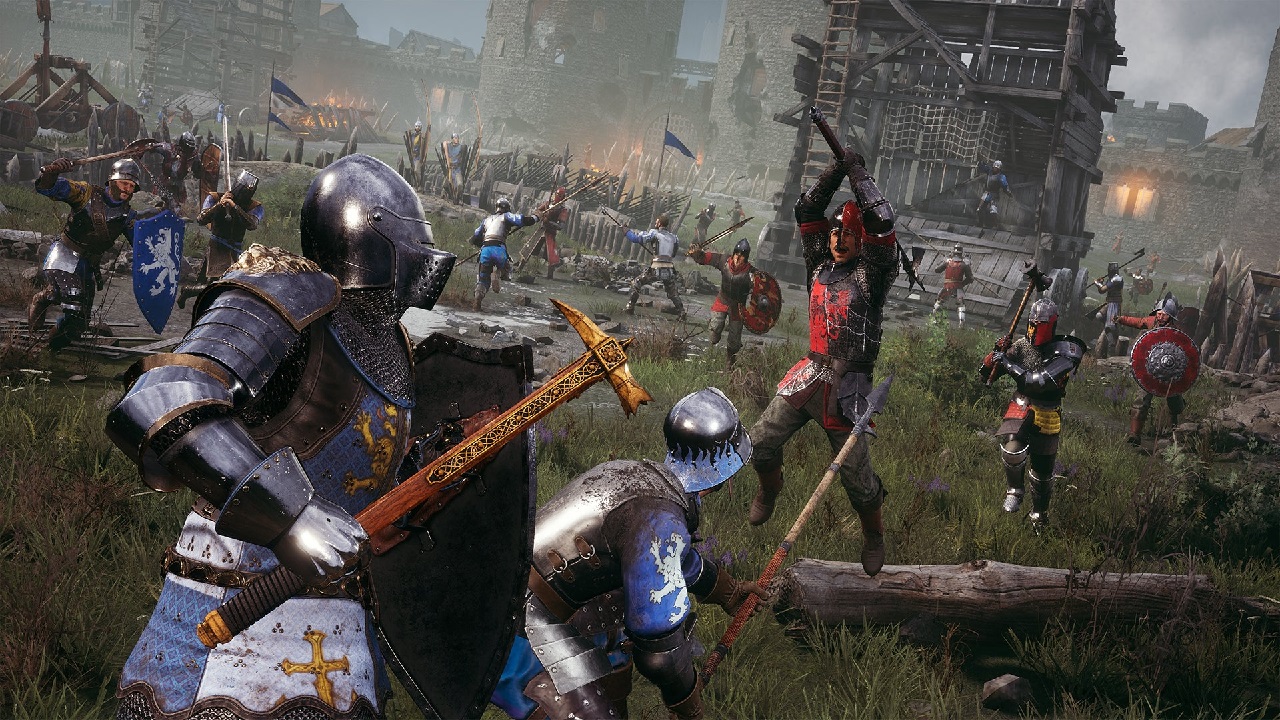 What can I say about Chivalry 2 that I have not expressed with giddy delight when I have been playing the game in previous livestreams of open and closed betas? Will you hear my story of magnificent conquests stretching from bloody beaches to hotly contested throne rooms? Shall I regale the uninitiated with the tale of when I chopped a knight’s arm off and dropped them to their knees before lining their head like a croquet ball and using a halberd’s business end as the mallet to deliver just ka-knockings to their dome? This is a vast PVP like no other and the experience you'll have with it can only be limited by the sheer depth of ragdoll physics hilarity, give-and-take melee, and hefty impact each swing entreats you to at nearly every turn.

The Masons Versus Agatha Round ???

There is only a little bit of overt and in-your-face story in Chivalry 2. The Agathian Order is a supposed just faction of honor while the Masons are a vengeful and barbaric group that split off from Agatha to see it annihilated. This story is further strewn through the battlefields that you will partake in. It's in the riveting pre-battle speeches given to you, the environmental storytelling of the maps and their decor, the lords and kings tasking you with laying down your life for them, and the peasants you slaughter as part of your charge into the city. The story may not in be a story mode per se, but I do appreciate how much narrative context Torn Banner weaved into the battlefields on which you march and fight at every turn.

And that takes us to the core element of Chivalry 2. This game is a metal gnashing, limb severing, team-based hack-‘n-slash fest. Every scenario is backdrop with which to guide the Agathians and Masons into murderous combat. Battles in Chivalry 2 range from every-warrior-for-themselves deathmatches and team deathmatches, to massive objective-based conquests.

One of my favorite levels in the game starts with the Agathians aiming to breach a Mason city with siege towers, burn tents in the outskirts of the fortress, guide siege ramps up to the inner sanctum wall, and kill a royal heir before time runs out. Each objective completion adds a bit of time to the clock every step of the way. The Masons aim to run that clock down and block the Agathians at their objectives as much as they can. There are other scenarios where the Masons are on the attack too and overall, these conquest maps are just riveting as time winds down and you hope your contribution to the battle was enough.

With cross-play available in Chivalry 2 right from the get-go, there was also almost never a lack of battlers in the 48- and 64-player lobbies. PS4, PS5, Xbox One, Xbox Series X and S, and PC have been well-tested and are set to enjoy each other’s company in this game on Day 1. There are still some features left to be desired. For instance, cross-platform partying was missing from the review period although Torn Banner has said this is a coming feature. A more quirky one was that PlayStation 4 and PlayStation 5 had some issues communicating with each other without the PS5 console having the PS4 version of Chivalry 2 installed. It’s not perfect, but this is a moving target I feel confident in Torn Banner fixing up given their effort to make cross-play a Day 1 thing at all.

Which path of steel and battle will you make your own?

There are also no shortage of swingable things with which to accomplish the goal of victory in Chivalry 2, some far more effective than others and some just outright ill-advised if not an absolute flex. In the former category rests your equippable arsenal of classes and the weapons that go with them. There’s Knight, Vanguard, Footman, and Archer, each with their own unique starting weapons and abilities. Knights have the two-handed sword and trumpet which acts as an area-of-effect heal. Meanwhile, Footmen wield slow, long-reaching pole axes, a throwable med kit, and deployable spike trap fortification. Vanguards wield axes to start and can throw oil pots that light an area and its contained soldiers on fire. Finally, Archers are your sole long range class with bows and arrows at their disposal.

You might notice I said “starting” weapon. That's because one of the main features of Chivalry 2 is that as you battle with a class, you can level that class up and unlock further subclasses and weapons. Before long, your knight might unlock a sword-and-shield weapon set or the ability to throw oil pots of their own. Meanwhile, your archer might be far deadlier at the cost of slower reloads with a crossbow in hand to replace the regular bow. Each class and subclass is pretty fun to level up. Moreover, if you favor a certain weapon, you can flex your mastery of it. By using a weapon effectively for long enough, you can unlock cosmetic skins for it. For the pole axe for instance, you can unlock halberd skins in three different variations from rusted to illustrious and polished based on your level with the weapon. It’s just another way to show your prowess.

And oh, how good it feels to get good with these weapons. Chivalry 2’s combat up front with an opponent is an active effort to get past their guard and sink your blades and hammers into their armor and flesh. There are right and left side swings, stabs, overhead slashes, and even special moves on most weapons. You could just swing blindly and you might do okay, but players in Chivalry 2 will sure be willing to outdo you or, worse, gang up on you. For those times, you’ll need to know how to parry, counter, kick, and make sure that whatever happens, your blade is the first to find flesh. It’s a system that anyone could pick up and swing around, but potent players who learn smart and proper defense alongside their offense will rise to the match’s recognized leaderboard.

There’s also just the satisfying results when you land your hits consistently. Chivalry 2 is a masterclass in satisfying feedback when you land a successful hit. Hit an arm enough and you might lop it off, leaving a player to grab their knife to fend you off. Hit them in the legs and you might knock them to their knees for a brutal finish. Parry their strike and lay into them with a vicious overhead special and you might take their head clear off in a splatter of viscera. It feels like you could kill someone a million ways in Chivalry 2 and still find a way to make it refreshing thanks to the game’s hugely adaptive ragdoll system. Add pickup items that include everything from tree branches and ballista ammo as spears down to straight up chickens and bread and you have a melee most ridiculous. And trust me when I say you don’t know ridiculous until you’ve downed a full-grown soldier with a throwing chicken to the head. True story.

The rain may wash away the blood, but the glory remains

I often hear folks talk about their "comfort food game" – that game in which they can turn their mind off and just go at it for pure good feels and satisfaction. I feel like Chivalry 2 is that game for me. If it was even just that it’s a game in which I can pulp a folk or two with a big honkin’ sword, axe, or whatever I can get my mitts on to often hilarious effect, I would be satisfied. That said, Torn Banner and Tripwire Interactive have poured no shortage of love into this game’s environments, objectives, classes, and player customization. It’s that dedicated level of support that will keep me coming back to the game and crossing swords for a long time to come.

This review is based on an digital PC version provided by the publisher. Chivalry 2 is out on June 8, 2021 on PS4, PS5, Xbox One, Xbox Series X and S, and PC via the Epic Games Store.

Rollers of the Realm: Reunion is skill shooting the franchise into a new era
Review for
Chivalry 2
9
Pros
Cons
Login / Register