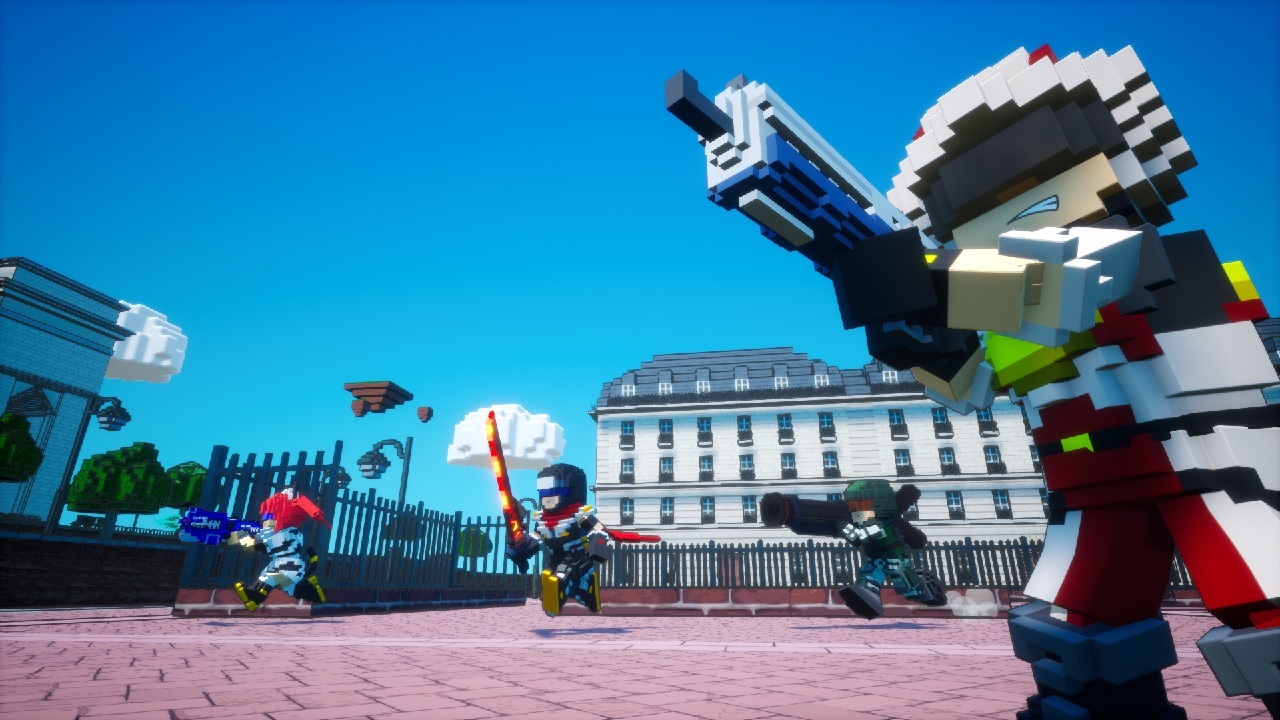 The Earth has seen a lot of trouble in the Earth Defense Force franchise. It’s had bugs, bio-weapons, motherships, and kaiju lighting it up left and right. It’s not often however that we start from a point so desperate and still somehow so lighthearted that it’s a long crawl back to victory. EDF: World Brothers puts your back to the wall and even if the stakes are impossibly high for the shattered Square Earth, this is one of the most fun and approachable takes we’ve seen in the series yet, even if it does feel a bit more simplistic than usual sometimes.

You might not think such a colorful spinoff of the usual Earth Defense Force affair would start off so stark, but I kid you not when I say the aliens blow up the Earth in the first seconds of the game. Specifically, a dastardly being of utmost power known as the Dark Tyrant guides six Motherships in an all-out attack and shatters the voxelated Square Earth, leaving it in scattered chunks of cities with capable soldiers and fighters lost in numerous battlefields. What can you do but pick up your gun and fight back?

What follows is a 60-mission gauntlet in which you take on familiar bugs, beasts, and bio-weapon aliens from throughout the entire series in this new voxelated style through the confines of various cities, deserts, and other cubic landscapes. You’ll start with an EDF Ranger with an assault rifle and a Wing Diver with a laser lance, but every mission has a number of allies (Brothers and Sisters) to rescue and recover, after which you can freely swap them in and out of your team of four between missions.

The missions are pretty bite-sized in World Brothers. You mostly just destroy every alien creature and giant in an area without mercy until there are no more left or defend a location from swarms. The typical ants, spiders, wasps, and other such large insects are joined by alien bio-weapons ranging from magma beam-lanching Sideros up to massive kaiju like the previously teased Saurous and the aforementioned Motherships. The style that D3 and Yuke’s brought to this game is fantastic. You might not think that a kaiju made of voxels can feel imposing. You’d be wrong. The boss battles are massive and even for the lighthearted and simplistic fun of this game, their massive size makes for some amazing encounters… Especially when you get to get to use equally massive weapons like the super-giant robot Barga to fight back.

One of my few issues with the structure of most missions is that when I say you have to kill everything, I mean you have to kill everything. That gets annoying in some missions when you whittle it down to the last handfuls of foes, especially if you missed one somewhere. More than once I had to travel from one end of the map to the other to go kill one ant or spider I happened to leave lying around. Even so, as I mentioned before, a lot of these missions are pretty bite-sized and it’s not like I felt like I was wasting a ton of time.

Arm yourself well with friends at your back

The massive pool of fighters in Earth Defense Force: World Brothers is easily one of the greatest strengths of the game. There are some variant copies of certain Brothers and Sisters that are basically recolors with the same weapon and abilities, such as Royal Brother Alpha and Royal Brother Beta, but there are also a ton of truly different options to choose from. Whether you’re talking about typical EDF soldiers like the Ranger, Wing Diver, Air Raider, Fencer, etc., or more unique fighters like the revolver-packing Cowboy Brother, Arabian beetle-wielding Prince Brother, or Swiss rocket launching Tulip Sister, there’s a lot of fighters to rescue to expand your overall pool.

More importantly, each brother adds new options to your overall capabilities. Wing Divers can fly, Rangers can dash and dodgeroll, the Gaucho Sister can hit three enemies at range with her long-range sniper rifle, the Royal Brother can set up wall of defense, and so much more. What’s more, you get to choose which four characters you can bring to each engagement and in single-player, you can swap between them freely. You can also play multiplayer with up to four players at once online and off, so the available swaps are just dependent on how many people are playing and taking up slots of your squad.

What’s even more fun is that each and every character has an SP ability based on a power gauge. These are super moves based on the character that have all sorts of offensive and defensive mega effects. We’d previously seen the Ranger’s Reverse Shooter XX, which blasts enemies with a powerful shot while restoring team health and the Wing Diver’s Geist XI, which launches a swarm of homing shots that can obliterate one or multiple foes. Meanwhile, the Amigo Brother has a move that makes all allies do more damage and take less damage, the Royal Brother deploys a group of tiny soldiers that autonomously attack any foes that get close, and the Prince Brother rubs a genie lamp to summon a tornado to sweep out enemies across the map. Every ability is a game changer and extremely fun to use.

I think the only issue I had with the characters was that the Ranger seems to be one of the only characters who can sprint despite already having a Dodge Roll ability. Nobody else seemed to be able do that and it makes things feel a touch slow when you’re trying to get to the last ant you need to shoot with a Rangerless team. Also, it’s not like every Brother and Sister is super useful. Prince Bro’s beetle is a fire and forget weapon that latches onto targets and explodes after a few seconds. That can leave you rather vulnerable when lots of ants close in on you. Wing Diver in comparison can fly out of danger and hit tons of enemies at range. Fortunately, the answer to not getting the most out of a fighter is to just swap them with one of the many others. They can’t all be zingers.

Save Square Earth from any alien attack!

Earth Defense Force: World Brothers might be the full-on pinnacle of “turn your brain off and play” in the best way. I truly found it to be pretty much thoughtless fun the whole way out with a few wows at certain enemy encounters in the game’s charming style, interest in what my newly rescued Brothers and Sisters and their weapons and abilities could do, and slight annoyance when I found anyone wasn’t good enough to run with my A Squad, which I legitimately named EDF Speedwagon. It’s not the full-fledged EDF camp and scope you might find in one of the mainline games, but it is a fantastically accessible shooter with a ton of levels to play whether you’re going it alone or with some buds, online or off. If you want to just not think and shoot the big bugs into little square bits and pieces with a library of characters and weapons from across the franchise, EDF: World Bros. might be just the comfort food you need.

This review is based on a PlayStation 4 digital copy supplied by the publisher. Earth Defense Force: World Brothers is out now on PlayStation 4, Xbox One, Nintendo Switch, and PC.