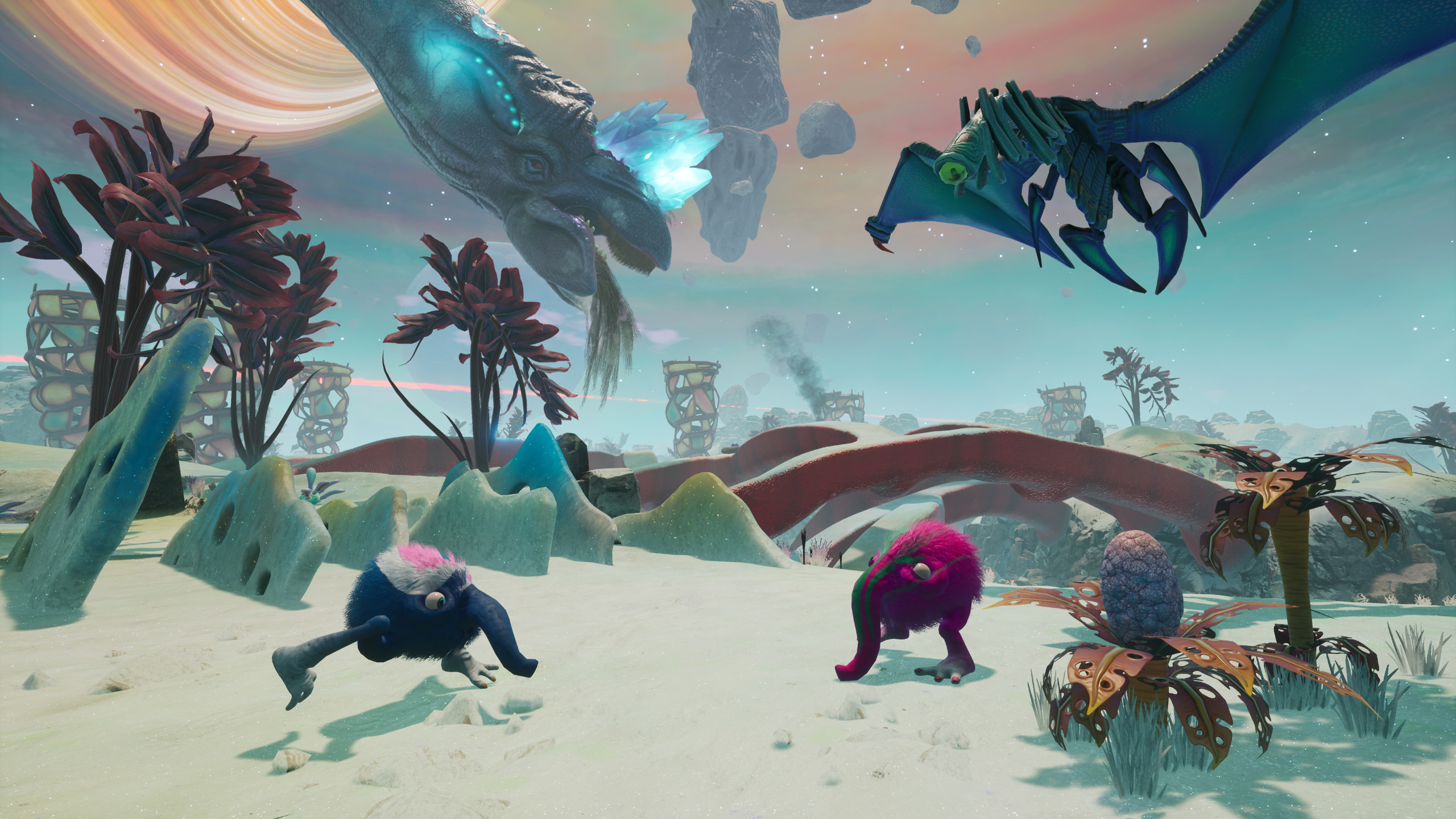 Classifying The Eternal Cylinder into one specific genre would be a tall order. Its most prevalent elements would have it firmly in the survival genre, yet its narration and progression feel like they’re ripped straight out of a classic PC adventure game. How its protagonists evolve and mutate place it into territory familiar to players of Spore, though its open-world shrine puzzles would be right at home in Legend of Zelda: Breath of the Wild. That said, it's clearly unlike anything else I’ve played when considered in aggregate, which is as strong a compliment as any new game could receive nearly fifty-years after the dawn of the format.

Move along or get squished

Progression in The Last Cylinder is driven by its namesake. There is literally a giant cylinder that is rolling along the alien world in which the action unfolds. It crushes everything in its path. The proceedings kick off as players are given control of a creature known as a Trebhum. These things kind of look like Mike Wazowski from Monsters Inc, except with two eyes and a Snuffleupagus-esque snout between them. The initial Trebhum is instantly tossed into turmoil as the cylinder starts bearing down on it in the game’s initial seconds.

From here, players are given some limited control information—specifically, that they need to move. You guide the Trebhum through a small trench and upon reaching an impassable obstacle, things look grim. Thankfully, the cylinder comes to a stop, allowing players to find their bearing and learn about the basic life operations of a Trebhum. They can suck up things with their face snake and spit them back out. Any particular item absorbed is added to an item belt displayed on the bottom of the screen. These items can be selected using number keys and ingested by tapping another button.

Some items, like those resembling mushrooms, are simply digested. Others, denoted by a special icon in the item belt, cause a rapid mutation in the Trebhum. The first of these mutations comes while in the opening trench. The Trebhum groans and shudders a bit like the Mogwai Gizmo after being exposed to water. The body rapidly changes shape and now our little fella has larger, longer legs. These new legs enabled the ability to jump much higher than before, facilitating the escape from the opening area and progression into the next chapter of its life cycle.

The initial Trebhum quickly learns that many of its kind have inhabited this place and elder voices it hears are acting as a guide on a journey to avoid the oppressive cylinder and help ensure the survival of the Trebhum. Some time is offered to explore the open world as players gather up whatever is fit for sucking up and avoid a litany of hazards, including strange creatures, inclement weather, and the cylinder itself. Trebhum must drink and eat, adding a layer of complexity to the proceedings.

The world of The Eternal Cylinder is pretty unique. Its flora and fauna often walk the line between inviting and menacing. There are large stone pillars that dot the landscape, each emitting a powerful light and acting as temporary speed bumps for the cylinder. After most encounters, the Trebhum must rush to the next visible stone tower in order to avoid the cylinder. The towers also emit light energy that acts as a guide to let the Trebuhum know where to venture next.

Early on, players will encounter an egg that must be moved near a heat source. Once given the proper heat treatment, a new Trebhum hatches, and players can give it a name. It looks a bit like our original Trebhum, but with different coloring and markings. Eventually, you start to roll with a posse, each capable of living with various mutations. Near the start of the journey, there is a cold zone with snow and ice. It has creatures that are largely similar to those of the first zone, but they are sporting layers of big, puffy fur. Your Trebhum starts taking chip damage from the cold and in my playthrough, I nearly died until I noticed a plant that had a furry flower. Naturally, I sucked up and ate it, evolving my Trebhum to grow fur. I was now winter-ready.

Players will enter random shrines and areas that contain puzzles. These puzzles were usually solved by making use of a unique ability gained from evolution. One shrine had a platform with eight drawings of bugs surrounding a glowing orb. I messed around in the room with no idea how to proceed until I saw a plant with an edible pod. I took control of one of my Trebhum posse and ate it. I then gained the ability to attract flies. Using this evolved Trebhum, I guided the flies onto the platform, and once enough of them were over the drawings, the platform lit up, unlocking a special map.

Upon leaving the shrine, a mad dash for the next stone tower begins with the cylinder pushing down on the Trebhum. Thus begins the next step in the journey. The camera reveals there is some sort of giant beast waltzing around behind the cylinder. What is this thing? What is its purpose? Who controls the cylinder?

Ride or die with my Trebhum guys

The Eternal Cylinder succeeds early on in drawing players into its world and narrative. I genuinely want to see what’s next for these hotdog-faced creatures. Being able to name the Trebhum in my crew effectively raised the emotional stakes. There is just enough mystery in the main story and everything on display is so weird that I want to see more. Players can sign up to enter an open beta period right now at the game’s official website. The final release is expected to come later this year via Epic Games Store.