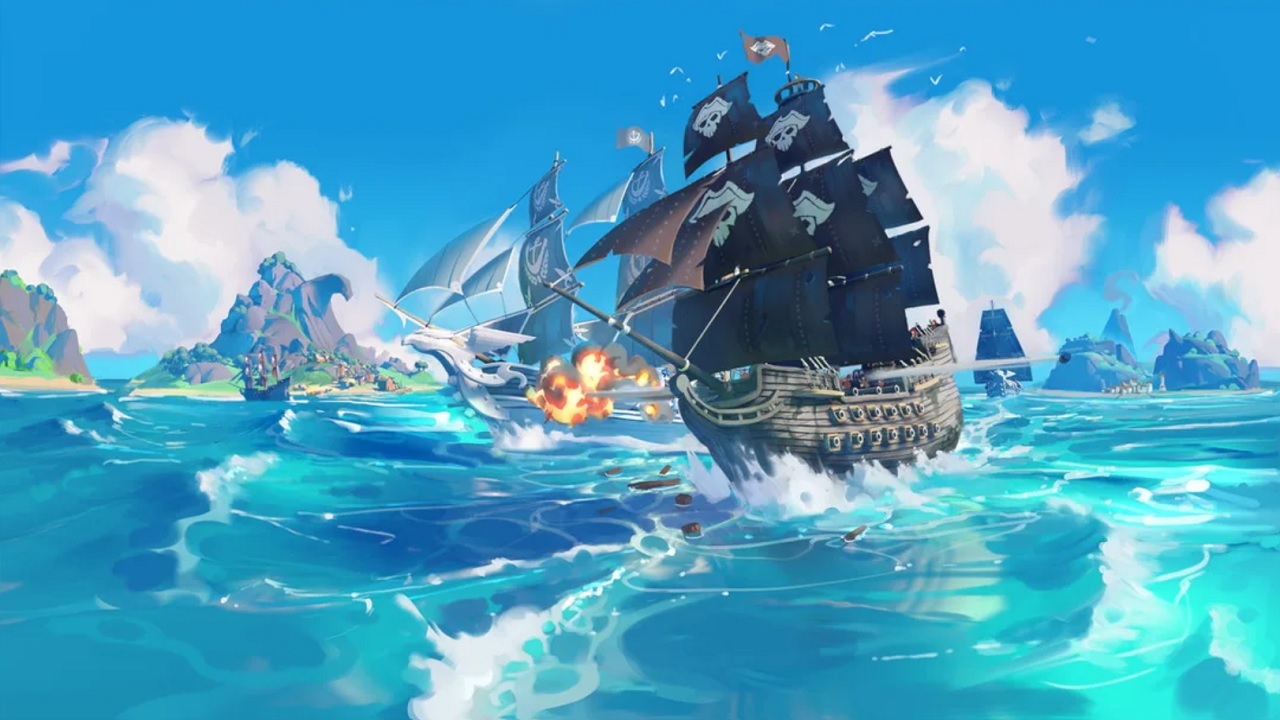 We’ve seen a few pirate games over the years that took aim at various parts of swashbuckling, crew management, and overall adventure on the high seas. That said, not too many focus so heavily on the aspect of ship-to-ship combat and can attach a full blown adventure complete with loot to deck your vessel out till it’s a fortress of cannonballs, gunpowder, protection and speed. That’s what sits at the core of the experience of King of Seas: a pirate action-RPG in which all of the action is confined to a ship, sailing the high seas, exploring uncharted waters, and digging up all the treasure you can find, all while blowing up and sinking anything that gets in your way. I took an early PC edition of the game for a spin and came away rather enamored with the possibilities, stories, and mysteries of King of Seas’ vast oceans.

A story of piracy and royalty

King of Seas takes place in an ocean of scattered islands which has already been brought under the rule of a kingdom and its royal navy of ships. The land was once tumultuous with pirate activity until the navy challenged them to a long, deadly conflict and won. The navy took control of the seas and pirates were scattered to the far corners of the world in splintered gatherings. You play a boy or girl child of the King of The Seven Seas. However, after something goes terribly wrong and you find yourself on the sour end of the royal navy, you lose your status as heir or heiress to the throne and are left for dead. Pirates find your dazed body, and among them is a former friend of the King who chooses to aid you in your survival and quest to find out who wronged you.

After the pirates outfit you with a starting ship with crew and cannons, you’re set off on your way in the procedurally generated seas of the game. My sessions with the game were limited to 45 minutes and each one saw a very different placement of the map and the ocean’s contents, with the only constant being the kingdom capital in the center of the map. There’s a vast ocean of ports and islands to map and visit if you’re going to clear your name.

So what do you do in King of Seas? Simple. You’re a pirate. You explore, take up quests in town ports, upgrade your ship (or purchase better, stronger ships if you can afford it), and, of course, you plunder. Whether that plunder comes off random treasure dig sites on beaches, salvage from crates and ship wrecks on the ocean, or ships you turn into wrecks yourself in combat is quite thoroughly up to you. I found that even as I was doing the main questlines in my session, there were opportunities to check out any number of unique tasks at any given port I was exploring. They ranged from investigating and fighting ghost ships to escorting special ships from port to port for rewards, as well as plenty of combat missions in which a specific ship was targeted. King of Seas defnitely keeps you aware of its main story progression, but I found it refreshing that I could sidequest and explore as much as I wanted to along the way.

Of course, for a game that focuses so much on ships, King of Seas seemed to have the goods where it counted as well. There were several classes of ships available to me throughout my sessions with the game, from fast and lightly equipped caravels to massively armed galleons. Moreover, there are also numerous ways in which you can equip them, ranging from special hulls, decks, and sails, to cannons, cannonball ammo, and special crews. There’s even specialty crew slots that provide abilities to your ship, like the ability to summon a whirlpool, belch fire using ship-mounted flamethrowers, or blast an nonstop onslaught of incendiary cannonballs. Some of the specialty gear you find through looting the seas, and some can be bought from ship carpenters at ports.

Speaking of which, money makes the world run ‘round and the seas run red. Where do you think you put all your ship improvements to work after all? As you become increasingly more bristling, you can head out to open waters and engage in combat with ships to sink them and steal their booty or head to port taverns to take up the aforementioned sidequests. Either way, it all goes towards lining your ship holds with gold so you’ll have the resources you need to become a formidable pirate. What’s more, the variety of ships and upgrades made King of Seas feel like there’s plenty of ways to approach it and build up the vessel that suits you best.

Fighting on the high seas

Whether you want to be a peaceful pirate or not, you’re inevitably going to come up against ships that aren’t interested in letting you sail away freely. In these cases, you’ll have to fight, and that’s where one of the main components of King of Seas come into play. Your boat’s speed and maneuverability will matter greatly in any fight you take. You can open up one, two, or three sails to move about, the former of which allows you to turn better at the cost of moving slower or sitting still while the latter gives you speed, but also a poorer turn radius.

Actual battle has a wealth of variety too. Each ship has three "life" bars, representing ship hull integrity, sails, and crew. If hull integrity is reduced to zero, the ship will sink, but the other two matter greatly as well. Sails control your ship’s top speed and turning while crew determines how fast you’ll reload. Reload what you might ask? Why, cannons of course. And with the three bars in mind, you ought to also know that you’ll have three types of shots for your cannons: one that targets hulls, one that targets sails, and one that targets crew. Though hull controls the overall life of a ship, coming up against a big defensive ship may dictate that you ought to shoot its sails off or damage its crew to reduce its damage output or chance of escape before you go for the kill.

There’s also the aforementioned abilities you can arm your ship with like the flamethrower and whirlpool summon that damage multiple bars at once. In this way, and alongside all the equipment King of Seas offers for your ships, there are already a fantastic amount of ways to engage in combat, even in the early build of the game.

King of Seas may lose out on a bit of the human element by keeping most of the game confined to control of a pirate ship with just a few town interactions in between, but that’s also what makes it interesting. It hosts a beautiful world of randomized blue ocean and islands, and plenty of loot ripe for the picking and a cavalcade of naval warfare on the way to your glittering prizes. It will be quite fun to see what this game has store for us once our sessions aren’t confined to time limits. Even so, for what I could see, King of Seas has a wide variety of boats, loot to upgrade them with, and quests in which to utilize your bristling ship across it vast tropical space. I’ll look forward to seeing what more it has in store as we approach its release in early 2021 on PC, PlayStation, Xbox, and Nintendo Switch systems.