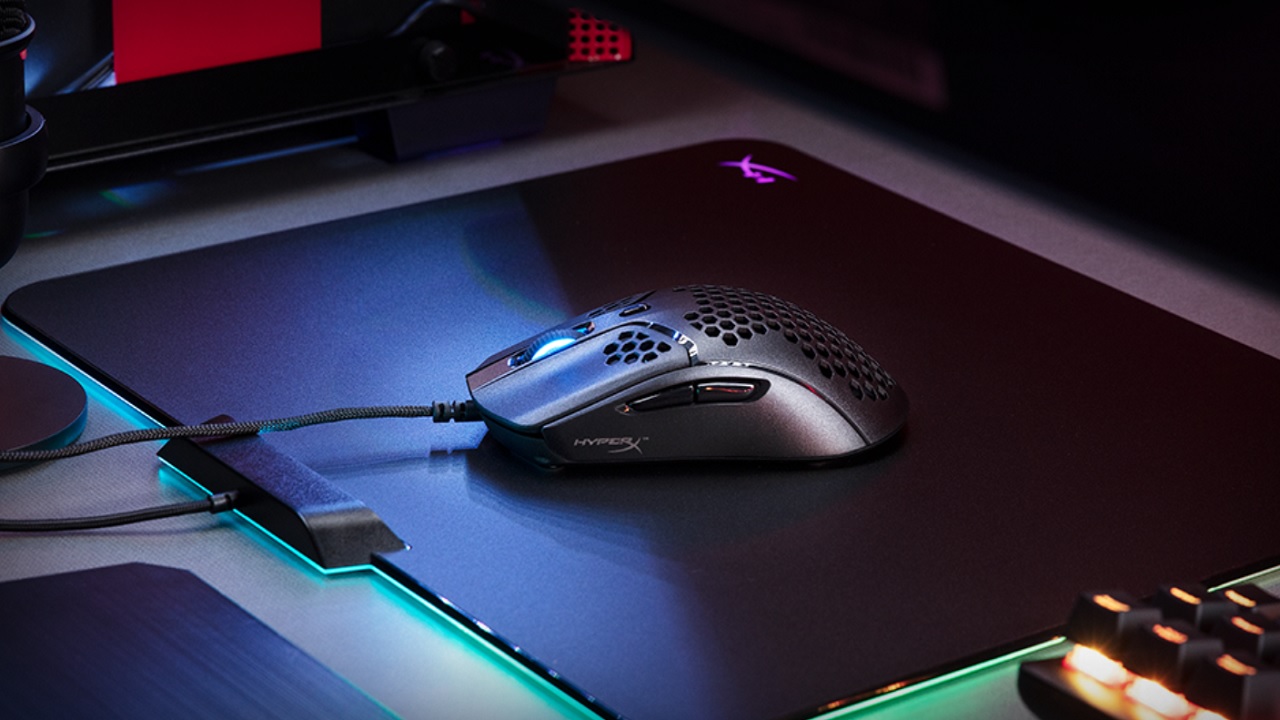 The HyperX Pulsefire lineup is already packing a pretty good list of gaming mice, but there is a niche that has as-of-yet gone untapped in the catalogue: The ultralight mouse. Enter the HyperX Pulsefire Haste. This new mouse is meant to take some of the best features of HyperX functional Pulsefire mouse design and pair it down to a featherweight form. Indeed, it does exactly that. The HyperX Pulsefire Haste has a few features that take some getting used to, but resistance in drag or pull on this device is practically non-existent, making it an exceptionally comfortable option for both gaming and everyday use.

What’s in the box?

Let’s talk about the basic features of the HyperX Pulsefire Haste. It’s a six-button mouse: two main left and right-click buttons, a scroll wheel that acts as a third standard button, two buttons on the sides, and a button immediately behind the scroll wheel that acts by default as your DPI changer. The mouse’s DPI settings run from 200 at the lowest setting to 16,000 at the highest, and the mouse can store up to 5 settings, with the default options being four settings at 400, 800, 1,600, and 3,200. The bottom of the mouse features four glider “mouse skates” that help to reduce any kind of drag when sliding the device, and there’s even an extra pair of skates that can be used to replace the attached ones if they get worn out – a pleasant inclusion.

The HyperX Pulsefire Haste also features grip tape attachments for the right and left mouse buttons, and both sides of the mouse. I wholeheartedly like the feel of these attachments, although I find it curious that these come packaged as optional instead of simply attached to the mouse. Once they’re on there, they feel great and supply a good touch and handle to the mouse, but it seems just a touch obnoxious to have to peel and apply this feature to the mouse yourself. I don’t think it feels as good without the grip tape attached. The good news is that once they’re on there and oriented correctly, they feel natural, sturdy, and permanent. Just don’t mess up putting them on. You only get one set of grip tape stickers.

It also has RGB lighting and customization options, but the lighting is confined entirely to the mouse wheel and it’s flimsy in comparison to other products featuring similar lighting. You can put in effects such as color-shifting normal activity, but I would say that the only thing that really makes the RGB on this mouse worthwhile is that you can set the DPI settings to show a certain color on the mouse wheel RGB when you activate them (switch to 1,600 and it turns blue,  switch to 3,200 hundred and it turns yellow, etc.). This is a small feature, but I found it rather nice to tap my DPI button and get an instant indicator of what setting my mouse is on. Props for at least giving its otherwise uninspired RGB some interesting utility. You can also use the HyperX NGENUITY software (downloadable through the HyperX site) to customize further options like button functions on the Pulsefire Haste.

The HyperX Pulsefire Haste also features what is called a HyperFlex cable, which is composed of braided cloth over the wire. As someone who is usually a fan of a good braided cable over that of plastic or rubber, I also found this cable slightly offputting. The braided cloth is soft and malleable and I can feel the wires of the cable underneath when I give it the slightest pinch. It feels weak and makes me nervous about tearing or disconnection under any kind of incidental duress. Not saying anyone should expect to find themselves in a situation where they’re putting that kind of pressure on the cable, but accidents happen and it feels as though this cable would do little to protect the wires within if those accidents did happen. Then again, it’s also built towards the overall goal of Pulsefire Haste, which is absolute absence of weight or drag, and it at least feels like it does that much.

Putting the Haste in the Pulsefire lineup

Now let’s talk about the main feature of the HyperX Pulsefire Haste: it’s lightweight design. This particular mouse achieves its lightweight status through a honeycomb design of holes all over the top and underside of the mouse frame. Through the removal of a good portion of plastic, this mouse achieves an overall weight of 59 grams, or about 2.08 ounces. Indeed, this mouse is as absolutely light as any I have ever handled. And with the grip tape attached, it feels like I have full control and zero resistance in movement and operation of it. Where I’m normally cautious about going over 2,400 DPI on a mouse, I feel unusually good at a 3,200 setting because of the control the Haste presents.

Furthermore, for such a light mouse, the Pulsefire Haste features unusually sturdy buttons all around with good feedback. The buttons feature a TC Golden Micro Dustproof Switch, which is rated for 60 million clicks. What that amounts to is buttons that have some very impressive feeling feedback in them. You might expect a mouse of such trimmed-fat design to feel flimsy in its operation or even wobbly, shaky, or low-quality in its buttons. Pulsefire Haste feels as good and responsive on its clicks as any weighty tank of a mouse I’ve ever touched.

It might sound strange to say that a mouse that feels so light and good that it makes my gameplay seem more efficient, but that most certainly feels like the case with the Pulsefire Haste. The sheer lightweight design, the glide of the skates, and the grip tape makes for a mouse that feels effortless to control, and handles well as a result. There are some slight drawbacks, such as the low-quality feeling cable and the fact that you have to attach the grip tape yourself, but outside of those small complaints, the HyperX Pulsefire Haste feels pretty much altogether stellar if you’re looking for a lightweight, yet sturdy-feeling gaming mouse at a pretty easy-to-swallow price.

This review is based upon a sample unit provided by the publisher. The HyperX Pulsefire Haste is avilable for $49.99 via the HyperX website.