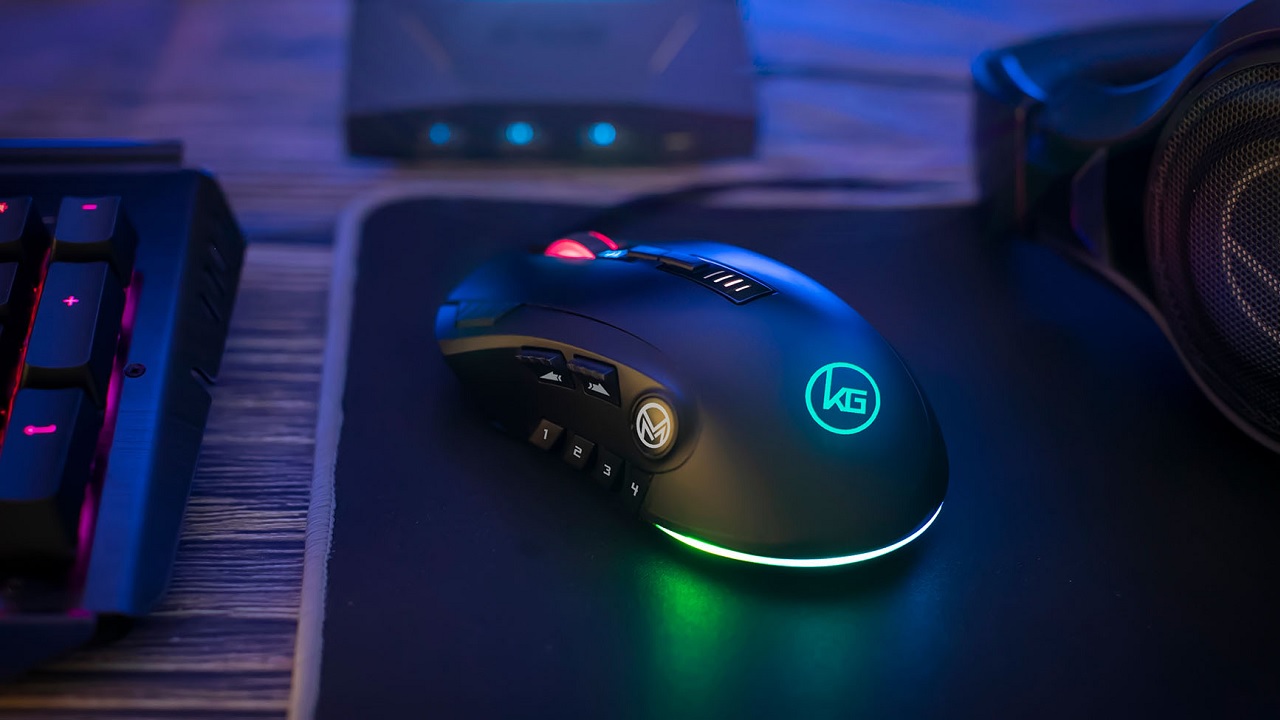 The IO Gear MMOMENTUM Pro MMO Gaming Mouse is a interesting entry for the Kaliber Gaming line. This RGB gaming mouse brings a wealth of buttons to the overall platform, but not quite as many as other performers. That said, it also comes in at a pretty reasonable price, has a wealth of customization, and features form that feels almost perfect to the hand over long periods of time. Its wealth of side buttons even overcome some awkwardness left by other mice of this particular design to make for an altogether economical and functional package for around $60.

Your hotbar at the touch of a thumb

The IO Gear MMOMENTUM features 11 total buttons on the platform: the usual left and right mouse keys, an extra key towards the top of the left mouse key, middle scroll wheel key, plus and minus sensitivity keys behind the wheel and near the middle on top, and then six buttons on the side with two up near the top and four in a line beneath. It also features DPI settings from 100 to 16,000, an adjustable weight system, a braided 6’ cord, RGB lighting, and a far end finger rest design.

From the get-go, I have to say that the MMOMENTUM is extremely comfortable to my palm. My fingers all feel like they fall naturally into the contours of the mouse with my ring finger resting in the far side groove while my thumb feels in range of all buttons on the side without strain. The only button I’m not entirely fond of is the one near the top of the left mouse click because compared to everything else, I feel I have to stretch for that one. That said, the side buttons feel very well placed and avoid awkwardness associated with mice like the HyperX Pulsefire Raid that go for something similar. It doesn’t feature as many side buttons or customizability as the Razer Naga Pro, but it also doesn’t feature the high-end price tag either.

Though it might not serve you as well if you’re looking to put multiple hotbars in thumb's reach, it does well if you can cycle through hotbars with the two buttons above the hotbar line. All in all, it feels right and comfortable for long periods of use and has enough buttons to be perfectly functional, minus the one mentioned stretcher. Moreover, the ability to go inside the mouse to remove some weight and make it lighter or heavier as you please is nice, but it’s got quite a smooth and effortless glide regardless, and I always appreciate a good braided cord over sticking, tangling, or easily tearing rubber.

Customization from macros to lighting

Out of the box, the IO Gear MMOMENTUM comes with color streaming RGB, six DPI settings at 800, 1,600, 2,400, 3,200, 5,000, and 16,000, and a few keys curiously programmed. In order to customize the functionality of the mouse, you have to go to IO Gear’s website and download the software, which is a bit of a bother. It would be nice if, like many other devices, it simply had the software loaded in for plug and play support, but it is what it is.

Once you get to the MMOMENTUM’s customization menu, there’s a good suite of options to explore. The curious programming I mentioned is on the side 1 key. Despite being a supposed MMO gaming mouse, this key is programmed as a Sniper key (slowing your DPI to allow more precise aim in scopes on first-person shooters as you hold the key). Meanwhile, the 2, 3, and 4 side keys are programmed to 1, 2, and 3 keyboard functions respectively. It seems an odd choice of programming for a hotbar-themed gaming mouse and a cockamamie one for the numbered buttons. I appreciate having a Sniper option in the function customization. I just don’t think it should be on a numbered button by default. Fortunately you can fix this pretty easily and store up to 5 profiles to make use of whatever game style or input settings you want to play.

As mentioned before, the mouse also features RGB, but I would say that this is another matter that feels underdressed compared to other mice I’ve seen with the same stuff. It has a grand multitude of effects you can choose from and a full color wheel to customize your RGB options, but some of the colors just come across a bit too muted for my liking. If you’re looking for a flashy mouse, the MMOMENTUM has the functionality, but it leaves something to be desired on the pizazz.

Ultimately, I quite enjoy the comfort and functionality of the IO Gear MMOMENTIUM Pro MMO Gaming Mouse. I’ve rarely had a mouse that felt like a better, more natural fit to my hand. It has everything I need to make a game like League of Legends or Killing Floor 2 work quite well with much of the functionality comfortably within reach at all times, sans one particular button among the 11. That said, I won’t deny that out of the box, I had to do some work to make it play the way I wanted it to. Having to chase down URLs and download software is always a bit lame, and buttons 1 to 4 should probably have been programmed 1 to 4 out of the box without me having to change them. I also think its RGB is just a bit too reserved among other devices I’ve seen with the same feature.

These minor gripes aside, the MMOMENTUM has some good design behind it and the small gripes might be considered minor compared to the solid performance you’ll get out of the device once you have it where you want it. All of this comes together for what I would consider an acceptably decent investment at the $60 range.

This review is based on a review unit supplied by the manufacturer. The IO Gear MMOMENTUM Pro MMO Gaming Mouse retails at $59.95 and can be found at various retailers now.