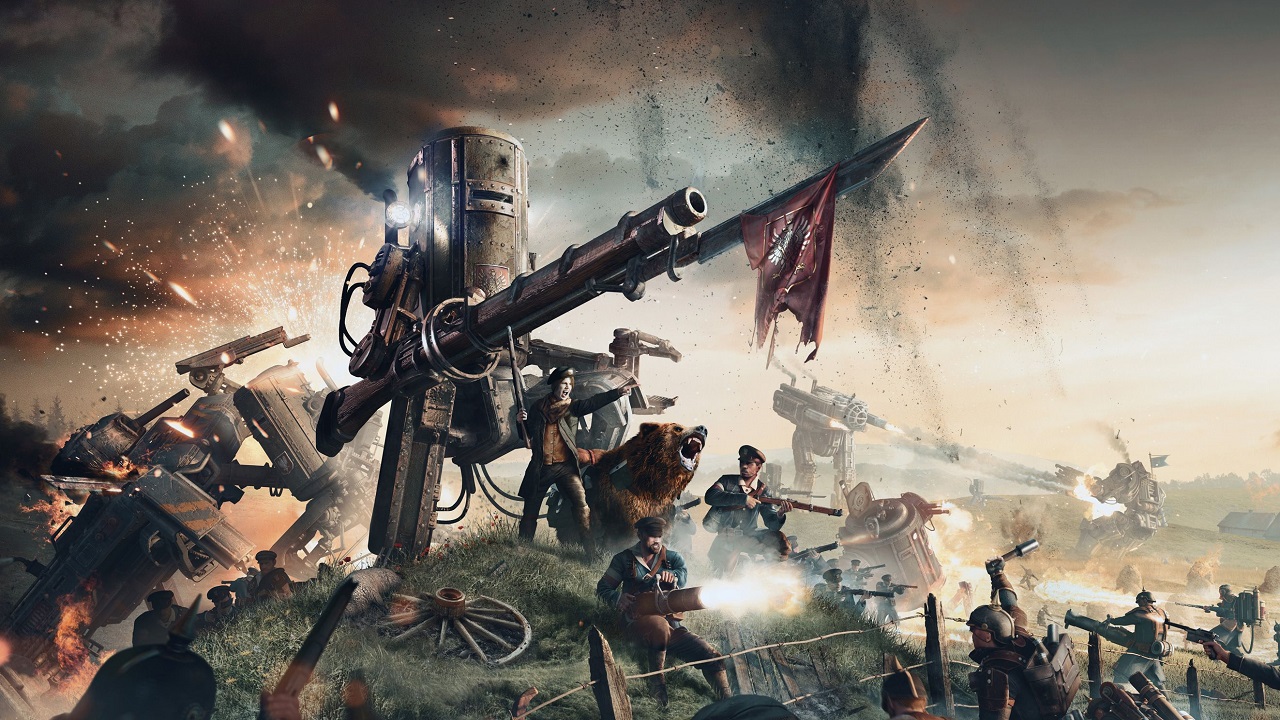 How different could things have been if Czar Nicholas II and Rasputin had not been overthrown? What if Nikolai Tesla had turned his genius towards machines of war? What if World War I had been determined not by the bodies of countless soldiers, but the grinding gears, steam, and armaments of massive bi-pedal machines? What if bears could be BFFs and also medics? These are the important questions that KING Art Games asks in its real-time strategy game, Iron Harvest. These questions and more are answered with impressive mechanical devotion, though not every gear seems to fit the machine proper.

As a real-time strategy, Iron Harvest offers a single-player campaign and multiplayer options. The campaign tells the story of fictional factions of the Polanian Republic, Rusviet Union, and Saxony Empire, stand-ins for Poland, Russia, and Germany respectively as they scrape for conquest and survival in the wake of The Great War. Much as any good real-time strategy game ought to do, Iron Harvest’s campaign of various missions guides you into the mechanics of the game. Along the way, you'll take up any number of squads and bases to carry out missions, take control of maps, do battle with enemy factions, and survive the odds no matter what.

As you play through the campaign, you’ll learn to command squads, take up different armaments found on the battlefield, pilot steam mechs to gain the edge in world, and tactically dismantle your foes. There’s base building throughout Iron Harvest as well, but much of its gameplay lies in keeping you focused on the combat. There’s really only buildings to train infantry, construct mechs, or build fortifications. Iron Harvest has some resource management, but more than that, it definitely pushes to keep you engaged in battle far more than in micromanagement in your production lines.

And what a battle it is. Iron Harvest revels in outdoing its spectacle at every turn. Did I mention it has medic bears? Yes, of course, but it’s worth mentioning again, because medic bears. Very specifically, you begin the game on the Polanian side of the conflict through the story of Anna Kos, a freedom fighter sniper with a trained bear companion known as Wojtek. Wojtek is a hearty beast that can not only run through hails of gunfire to maul your enemies, but also heal your allies during downtime. Wojtek also has bear dialogue (that is… dialogue written for bears) in cutscenes and is basically the best.

Iron Harvest just continues to up the ante from there in the types of over-the-top implements it gives you. Reaching your first mechs is a delight and discovering the different and stronger kinds becomes a common part of the experience, up to and including commanding a battle train in your vie to deal out absolute destruction of your foes. The escalation across Iron Harvest is intensely good and comes with a passable alternate reality narrative of an early 20th century full of ridiculous war machines in its nearly 25-hour story.

Iron Harvest's focus on ever more powerful armaments and combat-heavy gameplay is accented by resource control. Across most maps there are scattered weapons to upgrade your soldiers, mines to provide steady supplies to repair your mechs and produce new units, and resource crates to gain boosts of those supplies. In both single-player and multiplayer, speed and composition are the winning plays (more so in multiplayer). Many of the units have a very specific counter in the game. For instance, machine guns are great for surpressing fire and infantry control, but do little against a heavy-armored target. Meanwhile, anti-armor is great for engaging mechs at range or outmaneuvering them to hit their weak backs, but will do little in battle against shotgun or flamethrower infantry. The rock-paper-scissors of Iron Harvest is extremely blatant. It keeps things sort of simple, but also means there’s pretty much a distinct answer you should be arming yourself with against most things, bleeding out some tactical creativity.

Speaking of tactical creativity, there’s just a little bit of a disconnect in the mechanics and overall battles of Iron Harvest. There’s a cover mechanic in the game. Your soldiers can hide behind sandbags and rocks, or even hole up in a house to fire from it. It works for the campaign and adds some strategic merit in low-tech tree fights. But by even mid game in both the multiplayer and campaign, there are just a few too many implements that will absolutely rip cover apart. Don’t get me wrong, getting behind a mech to hit it with anti-armor weapons is important, but when the bigger toys come out to play, the battlefield felt like it was always just a bit too chaotic for cover to matter as much as army composition.

Iron Harvest also plays quite slow. The maps are big enough that it can feel like a lot of time passes in moving between action points. This is especially felt in units like the anti-armor troops, machine gunners, and some mechs that just don’t move that fast to begin with. Units like these are imperative, but the whole process of getting them from place to place can feel like a slog at times. Iron Harvest could benefit from a speed slider that lets a player boost the overall action of the game by just a bit (or a lot if I wanted).

There are some fun wrinkles to this in the form of hero characters, such as the aforementioned sniper Anna Kos playing second fiddle to best bear Wojtek. In all seriousness, Anna has serious range on that rifle and can pick infantry off at extreme range without putting herself in harm’s way. If most normal infantry get near here, Wojtek will give them bitey hugs. Meanwhile, Saxony’s Brunhilde mech is like if an AT-AT from Star Wars had six guns (three on each side) and a main powerful cannon. It’s a walking fortress of bristling shrapnel, but only at long-range. If a hero like Lech Kos or Colonel Zubov get in with their closer range mechs, they can pound and shred poor Brunhilde to pieces.

The multiplayer in Iron Harvest allows players to engage in skirmishes running from 1v1 to 3v3. Players can take on the role of Polanian forces, whose soldiers have rifles for long-range engagement, Rusviets with machine guns for close to mid-range combat, and Saxonies with shortguns for close-range engagement. That said, I found the offering of scenarios just a touch meager. There are only three 1v1 maps, two 2v2 maps, and one 3v3 map at the time of this review.

For their part, they do okay in offering variety, but as mentioned earlier, speed of decisions is the name of the game. You want to get your resources going quick and capture strategic mines, weapon crates, and resource drops ASAP so you have the means to build your better units and be ready for the fights faster. The game can be unforgiving in this regard because whoever gets ahead will leave the losing player with few options to make a comback very fast. Knowing where the resources were and how to get my units to them fast and efficiently often felt like the determinate factor in whether or not I’d win with a few exceptions. Some of the units also just seem outright limited in multiplayer. As mentioned before, there are definite counters across the board. Getting the scissors to your opponents' paper as fast as possible seems to mean far more than putting a defensive or tricky strategy together.

Multiplayer in Iron Harvest isn’t terrible, but right now it comes down to the fact that the mode just feels a bit too limited by speed and hard counters over strategy, as well as a small pool of maps. Even just bringing some maps over from the campaign might help. Either way, the limited strategy due to certain mechanics of the game makes for a multiplayer mode I’m not sure I can recommend over the likes of other RTS options in its current state.

Bury me with my bear in Polania

Overall, Iron Harvest presents a fascinating alternate reality of which I’d like to see more. The war is intense, the maps are rather pretty, and the units are an escalating maelstrom of steel and steam from which delightfully concepted war machines come into play. The battles are intense and the deployment of armaments can make one feel giddy in the rush of it as bullets and shells fly and explode. That said, some unfortunate aspects distract from the experience. The game’s increasing technology tree makes cover-based tactics a questionable proposition, the slowness can make downtime between events seem just a bit too long, and multiplayer is a bit too limited. The game is not horribly marred by these drawbacks, but best bear Wojtek can only carry the spirit of Polania so far with the baggage weighing him down.

This review is based upon a digital Steam copy of the game provided by the publisher. Iron Harvest is available now on PC, PlayStation 4, and Xbox One.