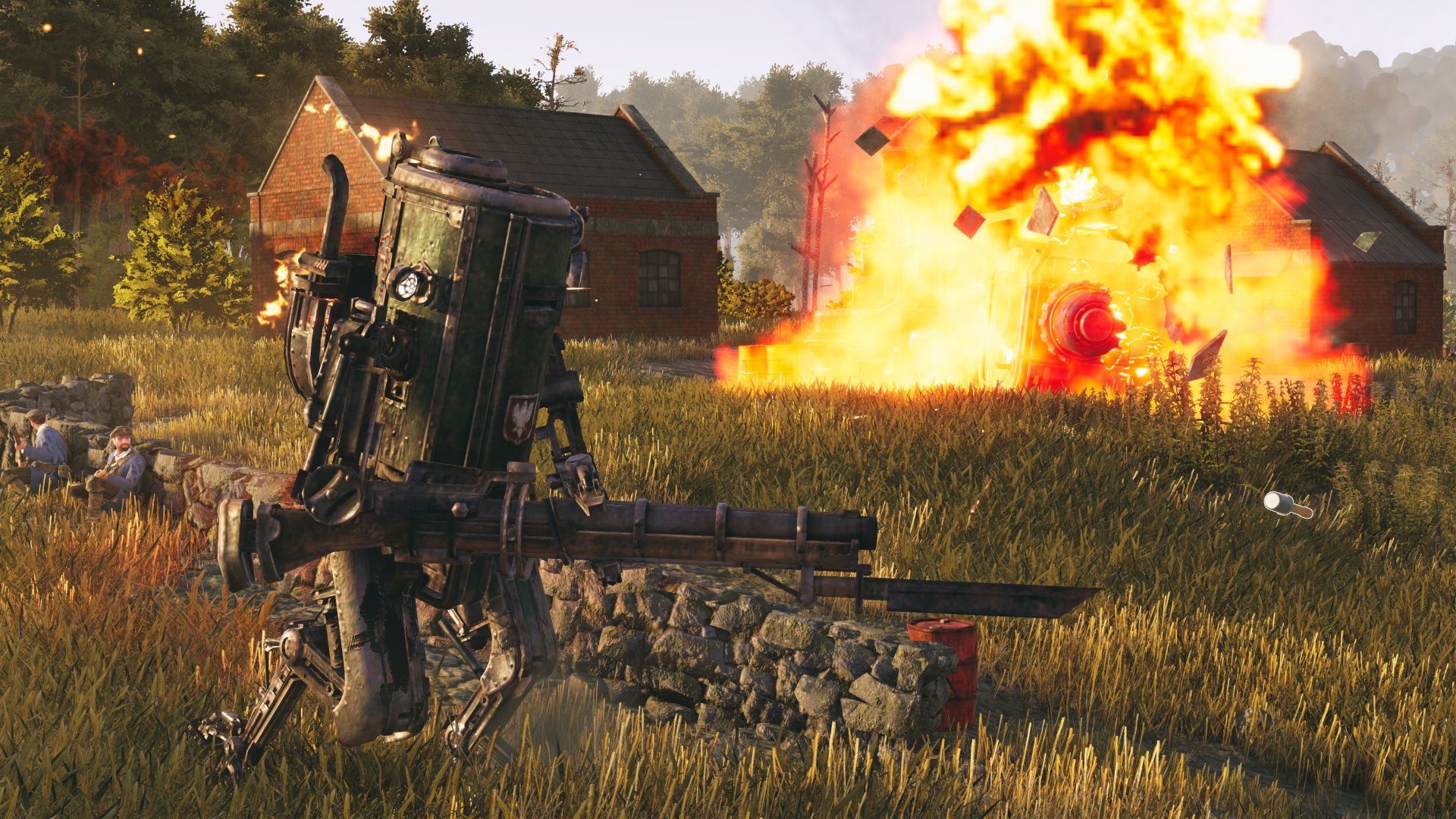 With Iron Harvest being based in an alternate reality, how was the game’s world influenced by the climate following The Great War? What liberties did you take?

Of course, we have to take into account that the 1920+ universe is completely fictional, but it is correct that it takes its inspiration from the early 20th century. The creator of this universe, Jakub Różalski, took the beauty of Poland’s rural landscapes and combined it with giant diesel-fueled mechs. We liked how the “old world” clashed with scientific and technological progress, which is one of the big themes of the game. Our factions are loosely based on real-world countries. Saxony for example has many similarities to Prussia or Germany. But in the end, it is a fictional world with giant walking machines and we made sure to mix up everything enough to get away with that.

What will WWI/history buffs notice in Iron Harvest?

In World War 1 – both the real one and in ours – people thought it would be a war like any other, unaware of the destructive power of mechanized warfare. But instead of the first tanks, airplanes, and far better automatic weapons, it was diesel-powered mechs that took center stage in the conflict in our world. But there are still many elements you would expect, like trenches, sandbag barriers, barbed wire, artillery, cannons, and heavy MGs. Cover plays an important role for infantry, who can engage in melee combat. One of our heroes even leads a Polanian cavalry squad. While exploring the world, historians may find some clues to actual historical figures as well who do not participate in our storytelling but are still part of the Universe.

How do the giant mechs influence combat strategy?

Mechs are an integral part of the Iron Harvest battlefield. From smaller and quicker ones to giant walking fortresses. But mechs aren’t as invincible as they may seem. Not the strongest unit, but the unit with the better position wins. A cleverly positioned AT gun or nimble infantry can take down even the most monstrous war machine. There is a unit, weapon or tactic for every situation. Your rifle doesn’t deal any damage to a heavy mech? Pick up an anti-mech cannon, flank the mech from behind, and witness how a well-positioned infantry squad can bring down a mech. Sending your troops recklessly to the frontline rarely really impacts the fight and you have to think and adjust to the situation.

How did the concept of totally destructible environments come into play when designing levels?

This is an important part of the game. Cover is essential to keep your troops alive, but cover can be blown apart. Therefore your units must stay on their toes most of the time, especially when mechs are approaching. The bigger ones can not only walk through most cover, even a whole house isn’t an obstacle for them. This is a challenge because the map might look totally different at the end of a mission compared to the beginning. What helps is the fact that a normal Iron Harvest match has multiple phases. At the beginning infantry – and cover – play a very important role. Later on, light mechs mix things up. Some of them can destroy cover depending on their weapons, but they can’t go through most of it. In the endgame, the really big mechs enter the battlefield and at this point, only rare indestructible cover is still useful.

How do each of the three factions bring a unique flair to combat?

All factions, Polania, Saxony, and Rusviet, were designed to look and play differently. They all have a unique infantry class and two specialized infantry units (the other infantry classes are shared between all factions). All mechs are completely unique, as well as bunkers. Polania uses lighter but cheaper mechs and excels in hit and run tactics. Rusviet, on the other hand, relies heavily on firepower and is particularly strong in close range. Saxony’s engineering skills brought them very tough, but expensive and highly specialized units. Each faction has three unique hero units as well. These are not uber-powerful super-units, but rather very versatile and unique units that range from snipers to exo-suits to melee mechs, all the way to battleships on legs.

Tell me about the Steampunk influence, did that come before or after the WWI concepts?

*Pushes up glasses* ... To be fair, Steampunk is a very popular pop culture period that takes place in the 19th century with steam engines and welding goggles everywhere. Diesel-punk, which is the era we’re using in Iron Harvest, takes place in the early 20th century with a focus on diesel fuel and heavy, oily iron machines. Then there is a no -punk era for many years until we reach the Cyberpunk era of the 21st century, but we leave that era to other studios (wink wink). But yes, Iron Harvest draws its inspiration from the Diesel-punk aesthetics, especially those with huge mechs. When we set out to create an RTS, we thought about the classic settings – fantasy, historical, sci-fi... Then I remembered these artworks by a Polish dude I saw on the internet… and next thing you know, they turned out to be the past three years of my life.

Iron Harvest is certainly one of the most unique takes we’ve seen on the real-time strategy genre in recent memory. Blending the historically accurate settings and weapons with science-fiction technology makes for a unique experience. Iron Harvest is available now for $49.99 USD on PC. More information can be found on the game’s official website.