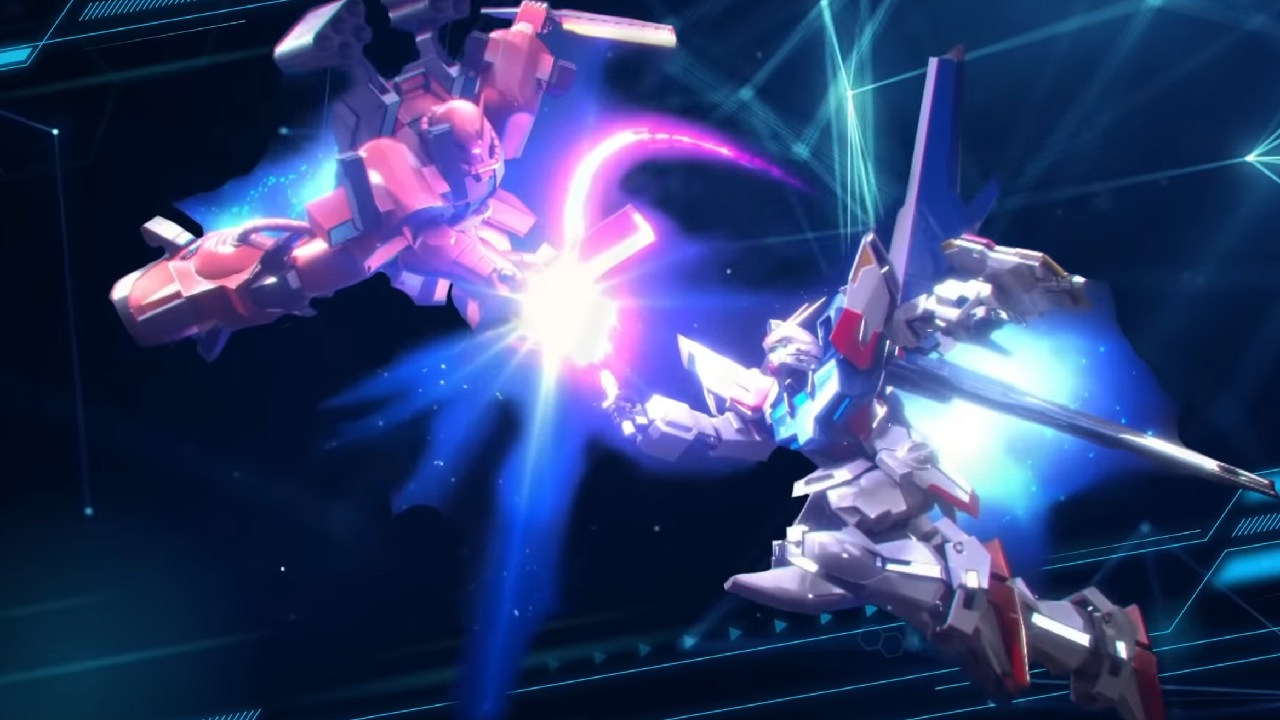 The original Mobile Suit Gundam: Extreme Vs. came out in 2011, wowing fans of the series in the arcades with a fantastic mecha fighting experience featuring most of their favorite fighting robots in 3D arena combat not far different from the likes of Virtual On. Before and after it, developers have floundered a bit in attempting to capture the sheer magnitude of goods in the Gundam franchise in solid combat gameplay. Now, in 2020, Mobile Suit Gundam: Extreme Vs Maxi Boost ON brings us a proper fight, featuring an absolute treasure trove of mobile suits from across the entire franchise in 2v2 combat. And with the exception of a few hitches, Maxi Boost ON does it quite well.

The core gameplay of Mobile Suit Gundam: Extreme Vs Maxi Boost ON is a two-player team affair versus either another two-player team or a menagerie of targets that could include waves of various mobile suits, special encounters, or boss-level mechs. Much of its featured modes are competitive gameplay with ranked, unranked, and custom match options, but PVE options are also there with vs computer game modes like a branching difficulty arcade mode (Branch Battle) and the Maxi Boost Mission mode where you take on distinct challenges in an increasingly difficult web of battles.

Once you select your mode and choose from the vast web of mechs available, as well as a EX Mode which we’ll discuss later, you’ll be dropped into a battlefield in which you must defeat your opposing foes without being destroyed yourself. Each Gundam features a different combination of short-range and long-range options to engage targets, as well as normal mobility and thrust boosters to move faster or cancel out of attacks to evade or launch another attack. Boosters are tied to a meter and using them wisely is pinnacle to success in avoiding enemy attacks and volleying with your own. In online modes, moving without boost is basically suicide, so learning to use it appropriately is maybe one of the most important hurdles of the game.

It’s worth noting, being destroyed isn’t necessarily the end of the fight. Instead of losing outright, it drains a battle force gauge to let you respawn. The goal is to drain your enemies battle force gauge and finish them off before they can do it to you. If there’s only a little bit of force gauge left, then your mech will respawn with lower health, so learning to work around your partner and aid them when they’re in trouble is also crucial if you want to conserve your team’s gauge.

One thing that feels oddly absent from Mobile Suit Gundam: Extreme Vs Maxi Boost ON is the presence of any and all 1v1 options or formal practice modes. You have to play as a duo whether it’s with another player or COM-controlled bot and that’s kind of a shame for players that just want to have fun going it alone, especially since 1v1 was a feature in previous Gundam Vs games. Moreover, there is no place to practice as much as you'd like with different suits and settings. One could say the custom Free Battles are the place for practice, but these are still formal fights that come to an end when one side is destroyed. It’s not as good of a place to test out Mobile Suit Gundam: Extreme Vs Maxi Boost ON’s vast roster as a formal practice mode with variable settings would be. Even so, the other modes are good and offer a ton of options for customization, PVP, and PVE fun in the game, and the tutorial can arguably be found in the Maxi Boost Mission mode (though the game doesn’t tell you that outright).

Also worth noting is that the netcode worked generally well and there are a lot of indicators to tell you what quality of connection you're coming up against before you accept an online match. In all of the time I spent online, I had little issue with disconnects or lag that I couldn't have circumvented and most matches went pretty smooth.

The vast franchise is fixing for a fight

Mobile Suit Gundam: Extreme Vs Maxi Boost ON is huge in its scope. The game brings a whopping 185 mobile suits from 36 franchises dating back to the first Gundam series and up to the more recent Thunderbolt and Iron-Blooded Orphans. Unfortunately, Gundam Build Divers and Narrative don’t make the cut, but there are still a ton of popular hero and villain mechs to choose from and plenty of ways to use them. Whether you go with the classic Gundam piloted by Amuro Ray, the more eccentric suits like Gundam Wing Zero and its Endless Waltz variant or the dual-sword wielding Turn A Gundam to name a few, each Gundam has a different loadout of melee and ranged attacks that set them apart from one another.

Moreover, the game features an EX Mode system which allows players to go into an empowered mode once a gauge is filled by damage taken or received. The three EX types, Shooting, Fighting, or Extend, power up different aspects of your mecha’s melee, ranged, and combo escape capabilities. Depending on your mech's loadout, each boost mode obviously fits a certain mobile suit best. For instance, the ZZ Gundam and Heavy Arms with their wide range of projectile attacks are best suited to the Shooting EX Mode. Meanwhile, mechs like the Turn A Gundam are better suited to the melee-focused Fighting EX Mode. Some are more balanced, so it’s really up to you to decide which will help you most when you need it.

It has to be noted, with a roster this big, balancing is obviously an issue. Some of these machines have everything they need to handily win the day with ease like Wing Zero and Bael. Some have to work a little harder with the tools at their disposal or are specialized in certain areas like the Cherudim and its long-range arsenal. And then some, like the Sandrock, just don’t have the arsenal, evasion, or damage output to stand up to the options of better mechs. In all of the battles I partook in, online and off, it was pretty easy to see just how one-sided a fight can be. A good player that handles the fundamentals well can probably overcome the odds, but for many and without a proper practice option, the victories in Mobile Suit Gundam: Extreme Vs Maxi Boost ON will arguably be decided in the character select screen. Even so, with so many mechs to choose from and many of them being viable, players are unlikely to find that no suit truly fits their wants or needs.

One thing worth talking about is the presence of boss characters. These special mechs such as Rafflesia from Gundam F91 and Divinidad from Mobile Suit Crossbone Gundam appear in special boss battles throughout the PVE modes. Not that I would ever want these overpowered super weapons in ranked play, but I kind of wish there was an option to play as them as well and just have some fun. There are, after all, regular mechs in the roster that basically play like boss-level characters themselves anyways. Offline, unranked, or custom options to play as Char’s Perfect Zeong or the like would have been fun.

An ageless and grand Gundam battle

I absolutely have to give Mobile Suit Gundam: Extreme Vs Maxi Boost ON credit for its sheer depth of goods as a Gundam fighting game. It packs a lot of fanservice into one game for a franchise so vast and full of different mechs, and it doesn’t lose out on offering a quality fighting system to do it. It doesn’t feel like a cheap cash-in on the name. Yes, there are balancing issues that come with stuffing more than 180 mobile suits into a character roster, but perhaps more surprisingly is that a lot of them are varied, fun to play, and viable. This game certainly could have used better direction, tutorial, and practice systems to guide new players into the experience, and it’s a shame that it foregoes 1v1 battles altogether, but Mobile Suit Gundam: Extreme Vs Maxi Boost ON’s mix of PVP and PVE options are pretty great and the online play is solid. All in all, this is the functional 3D battler that Gundam fans have demanded for a long time, but the balance and obscurity of guidance may stifle the enjoyment of players unfamiliar with Gundam or the Gundam Vs games.

This review is based on a PlayStation 4 digital copy provided by the publisher. Mobile Suit Gundam: Extreme Vs Maxi Boost ON launched in the US on PS4 on July 30, 2020.

Rollers of the Realm: Reunion is skill shooting the franchise into a new era
Review for
Mobile Suit Gundam: Extreme Vs Maxi Boost ON
8
Pros
Cons
Login / Register