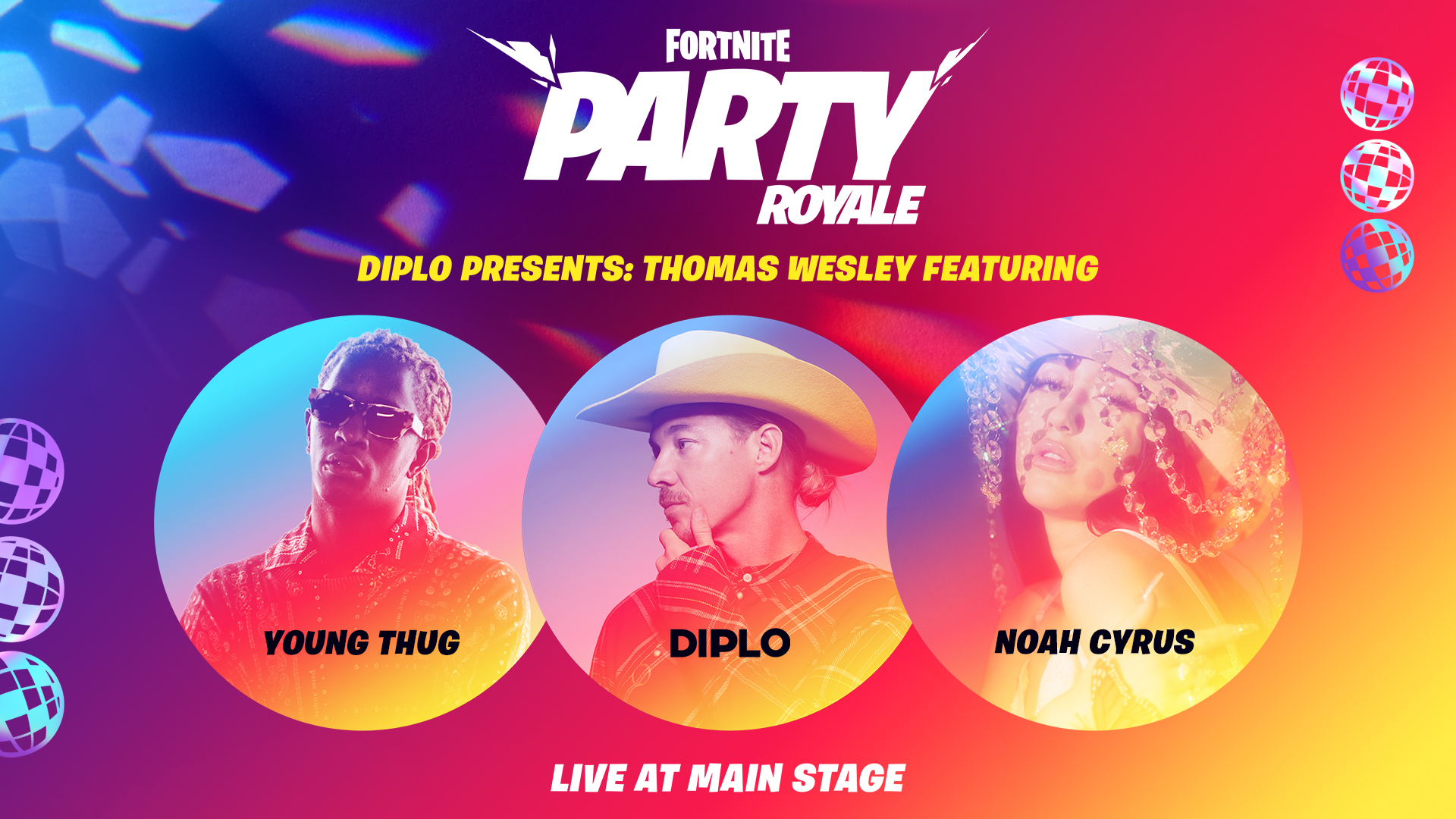 Fortnite’s pivot from zombie survival to battle royale game back in 2017 was one of the most brilliant moves Epic Games could’ve made. Now, Fortnite Battle Royale’s pivot from battle royale game to a concert and event venue is equally impressive. In light of the stay-at-home orders issued across the nation as a result of the coronavirus pandemic, a lot of in-person events have transitioned to digital formats. Fortnite’s Party Royale has been home to a number of musical concerts, and there’s more on the way. The next Party Royale concert will feature Diplo, Young Thug, and Noah Cyrus.

This announcement comes by way of the official Fortnite Twitter account. Since the quarantine, Fortnite has had a dedicated playlist for Party Royale. Combat comes to a halt, and players can just kick back and enjoy some entertainment together. On June 25, 2020, the next Party Royale will be headlined by Diplo, prolific DJ and artist. He will be joined by rapper Young Thug, who’s been behind some of hip hop’s biggest hits over the last several years. Singer Noah Cyrus rounds out the trio. Best known for being the younger sibling of Miley Cyrus, Noah Cyrus has begun to carve out her own identity with recent projects.

Take your llama down to Party Royale and dance til you can’t no more cause Thomas Wesley is comin’ to town.@diplo Presents: Thomas Wesley with special guests @noahcyrus and @youngthug LIVE at the Main Stage June 25 at 9 PM ET / 6 PM PT pic.twitter.com/bqeMIA2aMe

The concert will begin at 6PM PT / 9PM ET on Party Royale’s main stage. These live events have been a fun way to bring communities together, while also giving fans something to look forward to in absence of traditional in-person events. The events going down in Fortnite aren’t limited to musical concerts, either. Most recently, we saw Christopher Nolan premiere a new trailer for his upcoming film Tenet in the game.

Fortnite’s ability to double as a platform for events and concerts has drawn in players who typically wouldn’t favor the battle royale genre. It’s intriguing to keep an eye on Party Royale, as you never really know what Epic Games is going to pull out of its sleeve next. Whatever happens next, we’ll be right here to let you know about it on Shacknews.