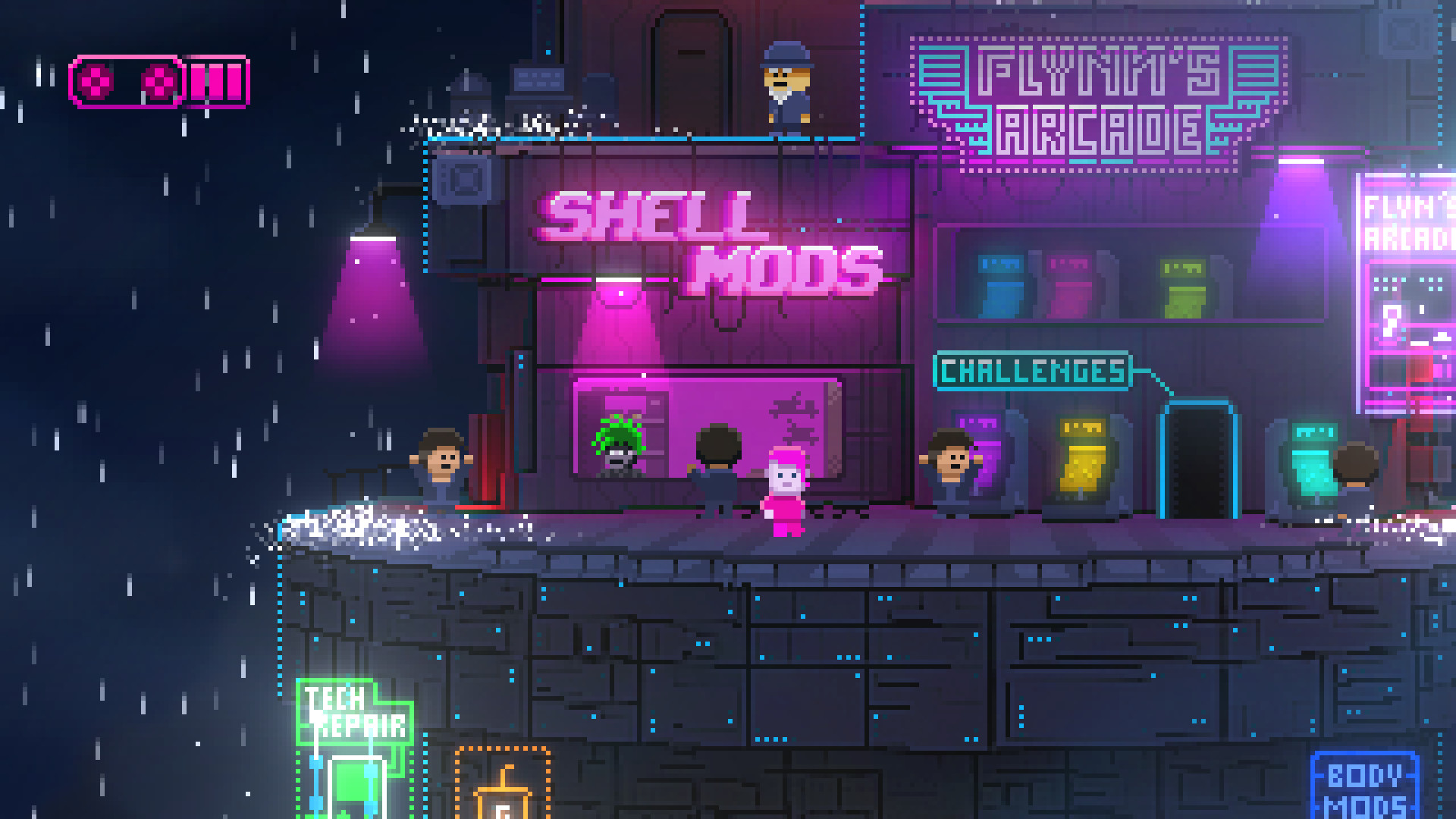 Platforming games are a dime a dozen these days. If a game wants to stand out, it needs to do something different, something unique. LAZR - A Clothformer does several unique things, making it a supremely challenging and rewarding experience that manages to climb above the average platformer. We recently got to spend some time with a build of the game, to put it to the test and see how it’s advancing the genre.

Currently in development by Garrick Campsey, and published by Top Hat Studios, LAZR puts players in the shoes of Lazr, the game’s namesake. Lazr is a “fusion powered killer android” that can literally shoot lasers out of her eyes. These come in handy against the rogue AIs and mega-corporation security guards that will do anything in their power to stop her from reaching her goal.

The game takes place in a dystopian metropolis called Alpha City One. As the newest freelancer approved entry into Alpha City One, you will be in contact with your handler, Jada, who has hired you to break into a corporation to steal data. Jada believes the company is kidnapping psychic humans and running experiments on them.

LAZR kicks off like a rocket. Players are introduced, rapid-fire style, to all of Lazr’s abilities. She’s got the aforementioned laser eyes, a dash ability that recharges after touching the ground, a leap, and the ability to grab onto and climb walls.

For the most part, LAZR’s movement and platforming is pretty straightforward. There are platforms to jump to, lasers to dodge, and tricky hallways to traverse. However, it starts to really show its chops with its cloth-based physics.

Scattered throughout each level are various instances of this cloth-physics. Strands of pixels hang down to form ropes to swing from while great pixel nets can be climbed freely like a viny wall. But these aren’t invulnerable grappling points, quite the contrary. Each section of the rope can be burned away by lasers, making it a battle to stay above the rapidly-burning net.

In one section, Lazr will need to use a net to climb to the top of an area while enemies fire lasers at her. The net will tear and break as the lasers burn away at the knots. In order to progress, Lazr will need to jump, grab, and dash in mid-air to avoid tumbling way back to the ground. It’s an impressive showcase that offers a lot of dynamic challenge to an otherwise simple vertical climb.

Speaking to this challenge, LAZR does offer two difficulties for players to choose. There is the hardcore setting for players that want to test their skills. This mode offers no checkpoints and has a more linear map. Then there’s the casual setting, which offers an open map with more options, as well as checkpoints. And it’s these checkpoints that will be useful for a lot of players, as LAZR is seriously tough.

The platforming in LAZR has a high barrier of entry. For a lot of casual players, the gameplay could prove to be an insurmountable obstacle. There isn’t a lot of room for error, with laser grids and spiked walls instantly killing the character. Despite this, the casual difficulty option does grant checkpoints, which vastly improves the ability to quickly get back in and try again. Much like Super Meat Boy, LAZR utilizes an instantaneous respawn, so the loss of progress is never felt for long.

However, there is a clear and present learning curve that is less of a curve and more a vertical climb. Getting over this spike is going to be tough, but once the mountain has been crested, there is a masterful system of platforming mechanics at play.

To further aid the player, Lazr can be customized to better suit the challenge ahead. These modifications can make her immune to bullets, lasers, and explosives, able to dash higher and faster, and shoot different types of lasers from her eyeballs. These small adjustments can greatly alter how the player approaches a level. If a level has a bunch of enemies that shoot bullets, make her bulletproof (lasers will still harm you). Similarly, if the jumps are too far, you can make Lazr’s dash go further, albeit you will be sacrificing one of her three hit points for this ability.

Overall, LAZR - A Clothformer is going to be a platforming veteran’s dream. There’s enough difficulty to test even the mightiest jumper and some leeway for casual players thanks to the difficulty settings and customization options. Make sure you swing by the LAZR Steam page during the Steam Game Festival Summer Edition so you can add it to your wishlist and download the demo.