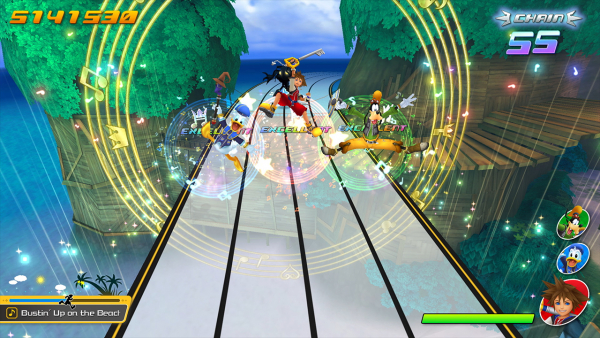 If you've ever thought that the coolest thing the Kingdom Hearts universe could get beyond multiple spinoffs and a smash hit third game is a music game, then today's your lucky day.

Square Enix has announced Kingdom Hearts: Melody of Memory, a rhythm action game coming to the PlayStation 4, Xbox One, and Switch later this year. It looks like a fast-paced real-time rhythm game with combat that plays like the game's regular battles, only set to the music. And there will be a huge mix of songs to play to, as well.

You may assume it's a bit like the Theatrhythm game line for Final Fantasy, but it actually looks way different. Here's what the teaser website proclaims about the upcoming title:

"Many characters from the Kingdom Hearts series appear as playable characters! Depending on the stage, Disney characters will appear as guests and lend you their strength. The game features a massive catalog of over 140 songs, including music from the Kingdom Hearts series, Disney, and more. Enjoy rhythm-based action through unforgettable music There are four play modes including online battles."

There's yet to be information about when or if the game will get a Western release, but seeing as how it's massively popular in America and other western territories, that should be a no-brainer. We just don't know when yet.

It certainly looks like a fun departure for the series, so hopefully we'll get our hands on it soon. Any new Kingdom Hearts games are right up our alley. Stay tuned to Shacknews for additional updates.