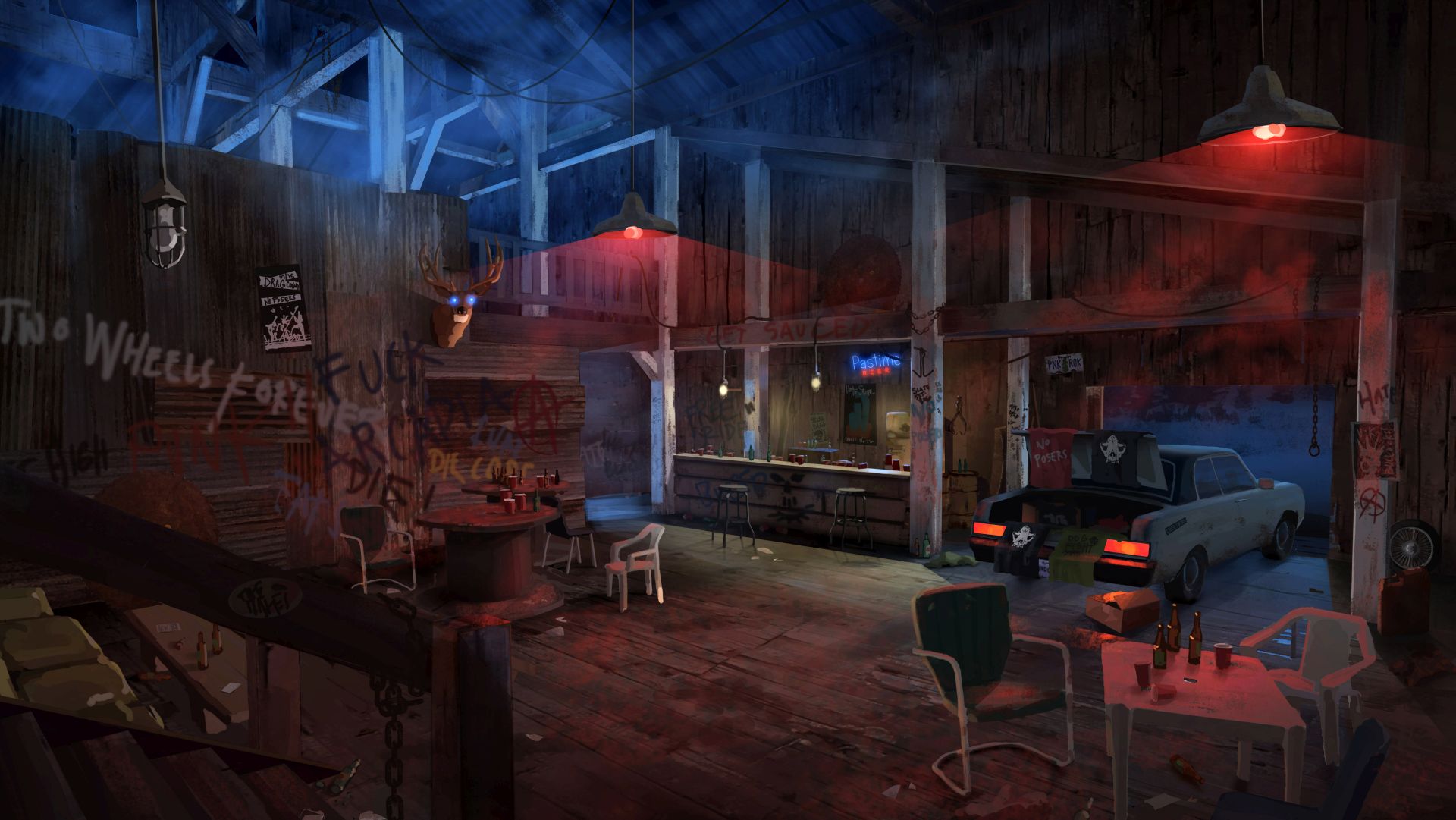 BOULDER, COLORADO, HAD IT ALL. Breweries and restaurants serving any cuisine one could think of, trails perfect for hiking, sustainable living, and myriad options for outdoor sports.

For Mark Lyons and Scott Atkins, who had developed games at Sony Interactive Studios America, Boulder had something else: Potential. Lyons and Atkins founded their indie company, Idol Minds on April 1, 1997. Over the next 10 years, they built a small but efficient team just shy of 50 developers and established a culture of creativity that led to games such as Pain, a ragdoll physics-heavy game that became the PlayStation Network's most downloaded game in 2008.

By the fall of 2009, Idol Minds' fortunes had changed for the worse. Twenty-six of the company's 46 employees were laid off after Sony, its long-time publisher, slashed budgets. Sony and Idol Minds seemed to have mended fences when, in June 2011, they announced a new project at E3. Their game, Ruin, was billed as a Diablo-type action game in development for PlayStation 3 and the PlayStation Vita handheld, with assistance from SCE San Diego.

Idol Minds went quiet for several months. In January 2012, the studio announced that Ruin had been renamed Warrior's Lair. Two and a half months after that, Sony pulled Idol Minds off the game.

It was the latest in a series of setbacks in Idol Minds' long search for an identity, both external and internal. Lyons and Atkins had started in Boulder, relocated a short distance away to the municipality of Louisville in 2003, then to the municipality of Westminster in 2015. Its gameography was all over the place, from snowboarding and collections of minigames, to motocross racing, to free-to-play mobile games. None of those games featured much in the way of a traditional narrative. Pain, Idol Minds' biggest hit, gave players free reign to destroy humanoid dolls as creatively as possible, such as being shot from rubber bands and detonated with explosives.

After moving to Westminster, Idol Minds launched a crowdfunding campaign on Kickstarter. The developers asked fans to chip in toward Shutterbug, a photography game with realistic graphics. They asked for $400,000. Ten days and only $2,973 later, the campaign was cancelled.

Idol Minds wasn't finished yet. In May 2017, the company resurfaced as Deck Nine, a new name that spoke to the team's new focus. For the past two years, they had toiled away on StoryForge, a toolset tailor-made for the type of game where, they hoped, they would finally find success: Narrative-driven adventures.

Deck Nine had the tools to weave interactive tales. All it needed now was a tale. They hit up contacts in the hopes of finding a publisher in need of just such a project. "Square Enix had been looking for a developer who they'd feel confident in to do work in the Life is Strange franchise," says Jeff Litchford, vice president of Deck Nine.

Representatives from Square Enix explained the situation. Dontnod Entertainment was working on a sequel to Life is Strange, and needed time to build a new story and characters. In the meantime, Square wanted another studio to develop a side entry in the franchise. They were in luck, Litchford said. Not only was Deck Nine available, their developers were huge fans of Life is Strange.

"Square was understandably nervous about a newer studio coming in and becoming part of such a beloved franchise with really passionate fans who cared deeply about the characters we'd be inheriting," Litchford recalls. "The way they went about resolving that concern was they tested us."

Deck Nine's test was to conceptualize and execute a narrative-driven scene in line with Life is Strange's aesthetics and themes. If Square Enix liked their dry run, they'd get a contract. Zak Garriss, game director at Deck Nine, convened with Litchford and other developers to brainstorm. Known characters such as Max, Chloe, and Rachel formed a logical starting point. The developers looked deeper. "I think both parties cast a pretty broad net in examining all the different ways we could tell a Life is Strange story," Garriss recalls. "We started with all kinds of ideas. We looked at every character. We looked at Victoria. I think Frank is still a really interesting character."

"The first one that came to mind was Frank," Litchford adds.

A minor antagonist in the first game's second episode depending on the choices players make, reclusive drug dealer Frank Bowers left an impression on fans due to his recognizable RV camper—which recalled fond memories of the misadventures of Breaking Bad's Walter White and Jesse Pinkman—as well as his canine best friend, Pompidou. What drew Deck Nine to Frank, however, was his surprising degree of vulnerability and compassion. In the fourth episode, Frank gives Max and Chloe a clue in their search for Rachel Amber, a close friend of Chloe's who goes missing. Players were as shocked by Frank's humanity as Deck Nine's developers. Frank, a criminal and outcast to most of Arcadia Bay's residents, had a heart of gold. Or, at the very least, gold plating.

Then there was Victoria. Wealthy and snobbish, Victoria Chase filled the role of "queen bee" at Life is Strange's Blackwell Academy. Anything she wants, she gets, which aggravates Max. But it gets worse. Not only does Victoria look down on Max's clothes, and not only does she have access to the high-end artistic equipment Max desires—she's a damn good artist. That rankles Max. It's one thing to be a conniving diva with money and influence. It's another to show remarkable talent when Max, who has nothing, has fight for every inch of progress.

As much possibility as Victoria and Frank held, Deck Nine's developers were drawn to Chloe Price. Chloe was a fixture in the first game. In fact, most of Max's actions stemmed from how she felt about Chloe, and vice versa. The team at Deck Nine saw an untapped vein of emotion to mine. She's sarcastic, often at the worst times, and many of her decisions are fueled by anger and resentment.

"That's the stuff that great drama is made of," says Garriss of Chloe's stormy personality. "I think the challenge of making an angry character more human and sympathetic was really interesting to us. It gave us a way to talk about the human experience and the spirit of empathy. We wanted to build an empathetic connection to a character; we always care about that in our stories."

In the Life is Strange timeline, a huge gap separates Max and Chloe's childhood friendship and their reunion as teenagers. Deck Nine would set their story during that uncharted period, and bring in another name familiar to fans. Rachel Amber went missing before the events of Life is Strange; players never saw her. They formed an opinion based on what Chloe and others said and thought. That meant they had no idea Rachel had saved Chloe's life.

Still reeling from the death of her father, Chloe was devastated when Max abruptly moved away. Rachel filled the role of best friend for Chloe, and the hole Max left in her heart. When Chloe became suicidal, Rachel stepped in. Sometime afterwards, Rachel went missing.

That, Deck Nine's developers knew, was the story they needed to tell. "In a very different way, Rachel was valuable and exciting as a character," Garriss says. "Every character you interact in Life is Strange 1 has strong opinions about Rachel, and they're not all positive. Getting a chance to offer players an opportunity to meet her themselves, having only been looking for her in the first game's mystery story—all of those elements really aligned to tell the story we ended up writing."

The concept of the game, our pitch, was all about that relationship, and accomplishing that chiaroscuro of known and unknown, and the alchemy of magic that can emerge from that.

ONCE DECK NINE pinpointed Chloe and Rachel as the heart of their narrative, they built outward. Much of the first game's narrative involved the storm approaching Arcadia Bay. Since Deck Nine's game was set before that event, they called it Before the Storm. As preproduction moved along, Garriss and the team mulled over what type of scene would most impress Square Enix.

"We were very early in that process, so rather than strive to produce a scene we thought we could ship, not knowing what the larger story structure would fully be yet, we chose to take a very dramatic concept. That concept was at the core of what Before the Storm was going to become: The relationship between Chloe and Rachel. We wanted to render that, so we situated it within a seminal space for the game, the junkyard."

American Rust is an archetypical American junkyard. Mountains of debris, junked cars, and lots of places to wander and hide in In the scene Deck Nine envisioned, which would take place in the first of Before the Storm's three episodes, Chloe and Rachel make their way to American Rust only to get into an argument. Rachel walks out, and Chloe's anger erupts. She lays waste to the surrounding junk and ends up in front of an old car—the car, she realizes, that her dad was driving when he was killed in an automobile accident.

Grief synthesizes with anger, and Chloe attacks her dad's car before collapsing, exhausted, and falling asleep. "What we were charting out was a scene that ideally would contain the DNA of every kind of experience in a Life is Strange game—the kinds of content that make Life is Strange unique as a game narrative," says Garriss. "Emotional, character-driven interactions that are cinematically and dramatically strong."

Deck Nine's testbed scene went through several iterations. Even after countless viewings, many were moved to tears every time they watched it. That was critical. The developers wanted to create something special—a scene that not only squashed any lingering doubts of Square Enix's, but that proved to fans that Deck Nine wasn't out to make a quick buck. They cared about Max, Chloe, Rachel, and everyone and everything that made Life is Strange so special.

"When you, as a creator and as a fan, get the chance to work with material you love, it's the kind of opportunity you may never get again," Garriss says. "So when you get it, you do the best you can and leave it all on the field. I think focusing on all that was one of the keys to how we really found the music of what Before the Storm would eventually become."

"We were taking material that was there, and also striving to render something in a new way that fans hadn't seen in the first game," Garriss says of the work that lay ahead. "That was the heart of our quest. The concept of the game, our pitch, was all about that relationship, and accomplishing that chiaroscuro of known and unknown, and the alchemy of magic that can emerge from that. It worked out, I guess. We're really grateful for that."