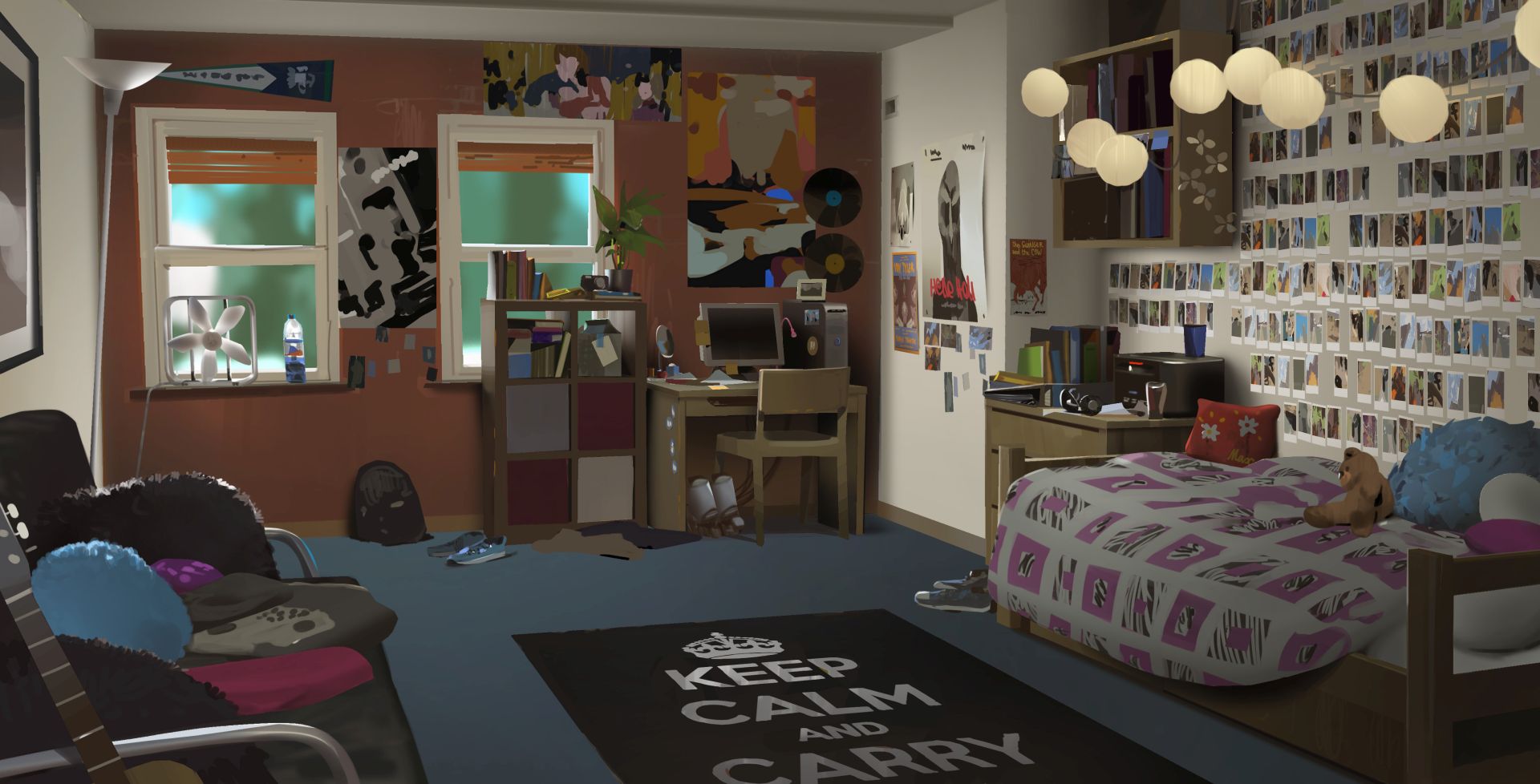 CO-DIRECTORS RAOUL BARBET AND MICHEL Koch spent the early stages of Life is Strange's design—known as preproduction—contemplating the big picture. What was the story? What development should Max, the playable character, and her best friend Chloe undergo over the course of that story? More pressing: What decisions should players make? And how will those moments affect both the resolution of the story, and the path toward its end?

"The art of these games is to let players make choices and for those choices to have consequences," says Koch. "More importantly, they should give players the feeling that with those consequences come branching paths. Our structure was a bit different."

Once they knew how Max and Chloe's story might end, Dontnod's co-directors worked with Jean-Luc Cano, their writer, to devise junctures within the big picture. From there, they grouped those moments into episodic chapters. Cano took those breakdowns and isolated himself for a few weeks, writing draft after draft so he, Barbet, and Koch could see the story from point A all the way to Z, and ensure that it translated into a game.

"We had to figure out how each episode would impact the others," Koch adds. "We looked at the story, which was a script, and determined how to translate it into a game with smaller details we wanted players to experience."

The next step was to work with artists and designers to execute those scenes. Every component of the story had to be factored in: where players had been, where they were headed, what choices they'd made. "We didn't have a perfect blueprint for how to do that. It took a lot of planning, thinking about all the consequences, and lots of trial and error," Koch admits.

Even with episodes assembled into rough drafts, Life is Strange's developers were careful to construct the story for players across a spectrum of personality types. At one end were those who would "save-scum"—reload their progress until they made what they considered the optimal choices for every scenario—their way to an ending they considered optional. At the other end were players who would accept their choices and see where the narrative took them.

We looked at the story, which was a script, and determine how to translate it into a game with smaller details we wanted players to experience.

Consider the former personality that of the "min-maxer," players who go for the best equipment, the best special abilities, the best endings. Such players could at once delight in their ability to manipulate the story, but derive little enjoyment from it. After all, if they have the power to do anything at any time, there's no risk associated with making any decision. Without risk, there's no emotional investment.

"There was no way for the min-maxers to know about that, because it's like real life," Koch says. "Sometimes we have short-term visions of the consequences of our action, but we can't be sure what consequences they'll bring about in a few days, weeks, months, years. If you want to min-max, you have to play the game completely another time."

Life is Strange's episodic schedule gave Koch and Barbet time to weigh feedback. After each episode's release, they read and watched reviews, scoured message boards, and read fan letters to get an idea of how players were responding to the beats thus far. They noticed a touching trend. Some players made choices that felt out of character, but worked in favor of that character's happiness or survival.

"Some players would say, 'I should do this, but I love that character, so I won't.' It's really cool," Barbet remembers. "In life, we make choices that are not good, but they're what we want to do. It's great to see that in a game. Some players say, 'Okay, I will force myself to not use rewind.'"

While some critics and players censured Dontnod for poor lip synching and slang considered outdated for 2013, during which Max and Chloe's story took place, Life is Strange received near unanimous praise as one of the most poignant and well-constructed interactive games of 2015. Some episodes were reviewed more strongly than others. The fifth episode, however, was polarizing. Depending on how they had played, some critics found their incarnations of Max and Chloe to be romantically involved. Others felt the girls' feelings were ambiguous.

Regardless of how often they manipulate time, or whether they tinker with it at all, players inevitably find themselves confronted with the ultimate choice. Condemn Arcadia Bay to ruin and save Chloe, or let Chloe die and prevent the town's destruction. Any one player's feelings about Max and Chloe, as individuals and as a pairing, largely determined the choice they made. Some reviewers chose to save the town. Chloe, they felt,  had been selfish whereas Max had been more giving; sacrificing Chloe redeemed the character's worse trait, and served as acknowledgement of all Max had done to rebuild their friendship after so long apart. Losing Chloe was bittersweet, but, these players believed, an appropriate end to her arc.

Utilitarianism is a philosophy that takes a logical approach to courses of action. One weighs the pros and cons of a choice, and acts based on maximizing benefits and mitigating cons. Or, as Star Trek's Captain Kirk and Spock jointly phrased it, "The needs of the many outweigh the few." Or do they?

As always, the answer depends on a combination what the player wants, and what the character would do. Stay in-character? Deviate from established behavior? In The Last of Us, developer Naughty Dog forces players, as Joel, to murder the doctors performing a fatal operation on Ellie. The operation would have harvested her DNA so it could be studied to develop a cure. There was no guarantee a cure would be developed, but Ellie believed even the smallest chance was worth dying for. Joel knew where she stood, but for him, his needs outweighed the needs of the many. Many fans hated being forced to make this choice.

In reality, there was never a choice. The Last of Us was not the sort of roleplaying game where players determined their fate and that of the characters around them. Naughty Dog wanted players to be Joel, and circumstances had broken and remade Joel into the sort of man who would act selfishly.

Life is Strange was more open-ended, but players and critics still debated which ending was most appropriate for Max, the protagonist and, thus, the character with agency. Maybe players would sacrifice an entire town for one girl's life, but would Max?

Even as players debate the endings of games like The Last of Us and Life is Strange, Koch and Barbet believe the journey matters more than the outcome, or destination. "The same thing happens in movies and TV shows," Koch observes. "Maybe you loved a show, but you end up hating it because the ending isn't the one you wanted. Sometimes people forget how great the journey was."

"The journey is really important," adds Barbet. "When a player plays an action game, such as Bloodborne, as much as I love it, I don't care about the ending; the experience of playing is just so cool that I don't care if the ending is crap. In a narrative-driven game, which focuses on characters, players are very invested in endings. It's like a TV series you like, where you have a vision of the ending in your mind, and you go with that if the show ends in a way you didn't want."